Anyone who has spent time in Japan knows how important the seasons are here. It’s safe to say that the idea of four distinct seasons looms large in the national mythos. New arrivals are often surprised to be asked: “Do you have seasons in your country?” We do indeed, the proud British visitor replies—often all four in one day.

Even in the cities, the ancient seasonal traditions are alive and well: the booze-fuelled springtime blossom-viewings along concrete-clad rivers, the displays of (artificial) autumn foliage in the department stores, the ceremonial donning of surgical face masks and knee-high leather boots as the wintry weather arrives . . .

But I sometimes wonder if people aren’t missing out on a trick here. Maybe the country doesn’t have four seasons, but six—thanks to the East Asian monsoon and the blustery period that bracket the hot summer months with torrential rain over much of Japan.

The first rainy season typically lasts from early June to mid-July. The tsuyu is a distinct time of year. Even if it is not officially counted as a season, it bears all the hallmarks of one: a muggy, enervating time of overcast skies and rain dripping from eaves, outbreaks of athlete’s foot (known as mizu-mushi or “water bug” in Japanese), and worrying infestations of mold and creepy-crawlies.

The second “bonus” season is the one we’re living through right now: the typhoons. Although the calendar suggests we should be well into autumn by late October, the weather is a long way from mists and mellow fruitfulness. More like torrential downpours, landslides, and gale force winds.

The Japan Meteorological Agency numbers the typhoons sequentially each year, rather than going with the names used in some other countries. On the morning of October 16, this year’s typhoon 26 (typhoon Wipha) lashed into the scenic volcanic island of Izu Ōshima, a couple of hours by boat from Tokyo. It caused massive landslides and left at least 31 people dead on the island. Another 13 are still missing there, according to figures released today (PDF, in Japanese) by the Fire and Disaster Management Agency.

And now typhoons 27 (Francisco, currently graded a tropical storm) and 28 (super typhoon Lekima) are on their way, pincering their way up the West Pacific and threatening to bring more mayhem. Over the next few days, they are expected to affect much of Japan’s Pacific coast, disrupting travel plans and possibly causing more serious damage. 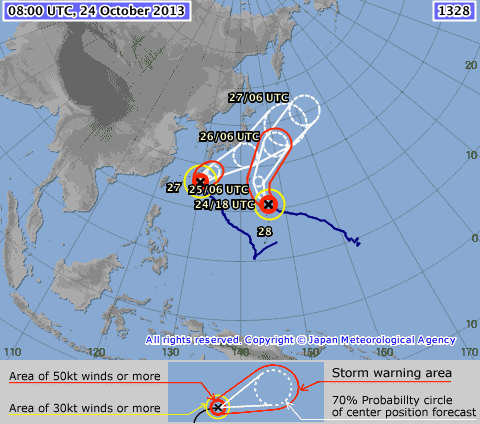 A weather map attempts to predict the movements of typhoons 27 and 28. (Source: JMA)

And authorities are warning that Izu Ōshima may be in the firing line again. Over the past few days, dozens of residents have chosen to evacuate to Tokyo. Today’s newspapers report that shops on the island have sold out of cup noodles and canned goods as those left behind prepare to batten down the hatches and tough it out.

If typhoon 27 does score a direct hit it will be a rarity. It would be only the third typhoon to make landfall in Japan this late in the year since records began in 1951. But the complex interactions between typhoons 27 and 28 make its progress difficult to predict.

Let’s hope that this one blows out to sea and leaves the islands alone. And then let’s get on with autumn. (PW)

(Data from the JMA.)