“Undōkai”: The Day for Sports in Japan

Once a year, quite often in October, Japanese elementary schools hold an event called undōkai, or “sports day.” This year was the fifth time for me to get up early on a Saturday to attend the undōkai at my daughters’ elementary school.

The event is sort of a big deal in Japan. In fact, the yearly undōkai is the main reason I own an expensive camera equipped with hundreds of (largely unused) functions. I bought it just before my eldest daughter’s second undōkai. The first time around I had used a small digital camera and ended up with nothing but a few blurry dots of what may have been my daughter competing in the events.

My past undōkai experience has also taught me the importance of showing up early to secure a good spot. This year I arrived at the school a full half hour before the gates were opened, but even that was not early enough—a couple dozen dads were already camped out front as if the latest iPad was about to go on sale.

Fortunately, the bulk of the patres familias headed straight for a sunny area near the track, leaving my shade-needy self free to grab a comfortable spot under a tree. After spreading out a skimpy plastic sheet and gathering a few nearby rocks to weigh it down a bit, I stretched out and observed the other spectators as they deployed a rather impressive array of camping gear, including plastic tables, foldout chairs, and even great metal spikes to secure their sturdy plastic sheets.

My wife arrived a little while later with our lunch and a printed program listing the day’s events. She had even taken the trouble to circle our daughters’ events and indicate on the program’s map where I should stand for each event to get the best vantage point. That crucial information, along with my decided height advantage and telephoto lens, made me feel fairly confident that I would end up with some decent photos to show my parents and in-laws. 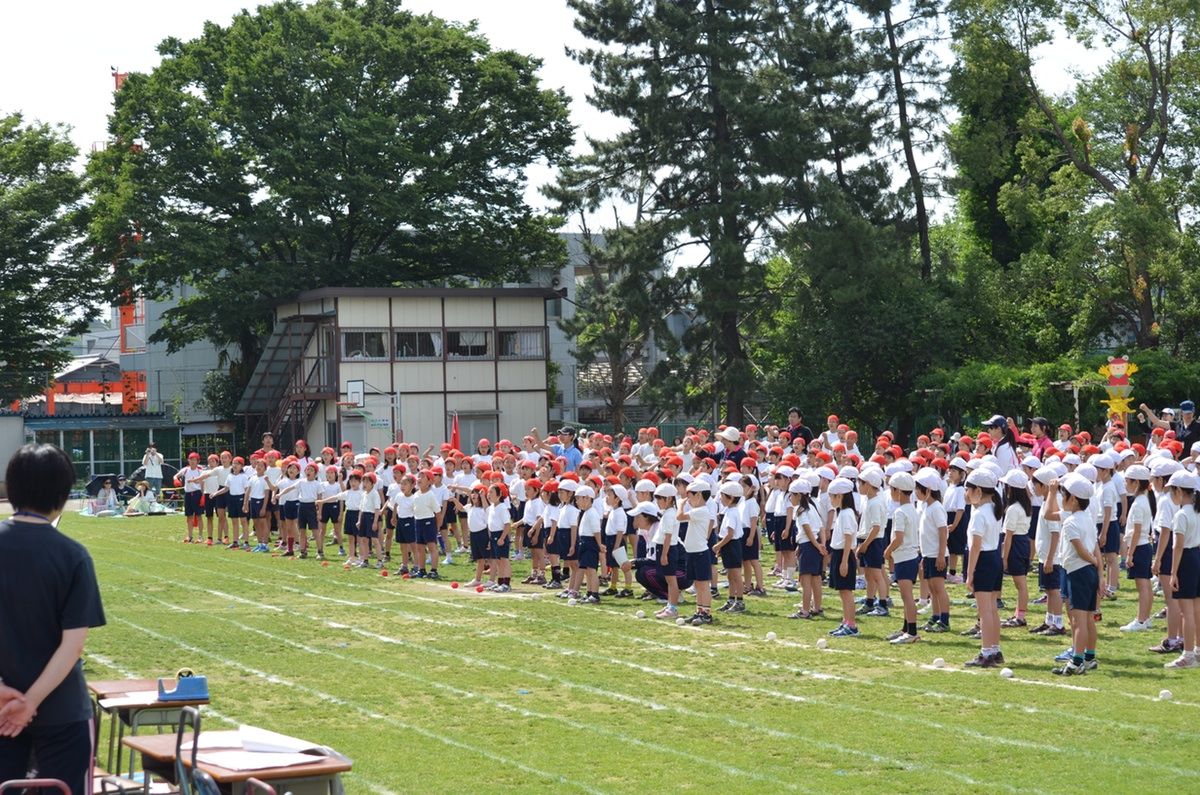 This is Japan, after all, so the opening ceremony was no surprise.

The undōkai got started just before nine with an opening ceremony and the unveiling of a quite wordy official slogan—as well as a brief celebrity appearance by the school’s yuru-kyara mascot.

The students compete in two teams, the Red and the White team, each with its own indefatigable cheerleading squad decked out in headbands and gloves in their team’s color. Things kicked off with these cheerleaders—boys and girls—taking to the center of the field with taiko drums and the team flag to rev up their teammates. The head cheerleader of each team, hands resting behind a fully arched back, hurled each syllable with the vocal strength of a hot-dog vendor at Yankee Stadium.

That round of cheers marked the first (but certainly not the last) time for each squad to lead the singing of the team song. The two rhythmical songs for the Red and White teams seem to be pretty standard throughout Japan.

The Red Team song in Japanese was:

The song flared up like a stubborn brush fire over the next six hours, making me wonder how the cheerleaders found the strength to make it through the day.

The first event for my younger daughter, a second-grader, involved groups of four students at a time using a wooden stretcher to transport a giant red rubber ball. Like other events at the undōkai, this one seemed designed to not only be fun for the participants but amusing for the parents looking on; the enormous rubber ball was a nice touch. 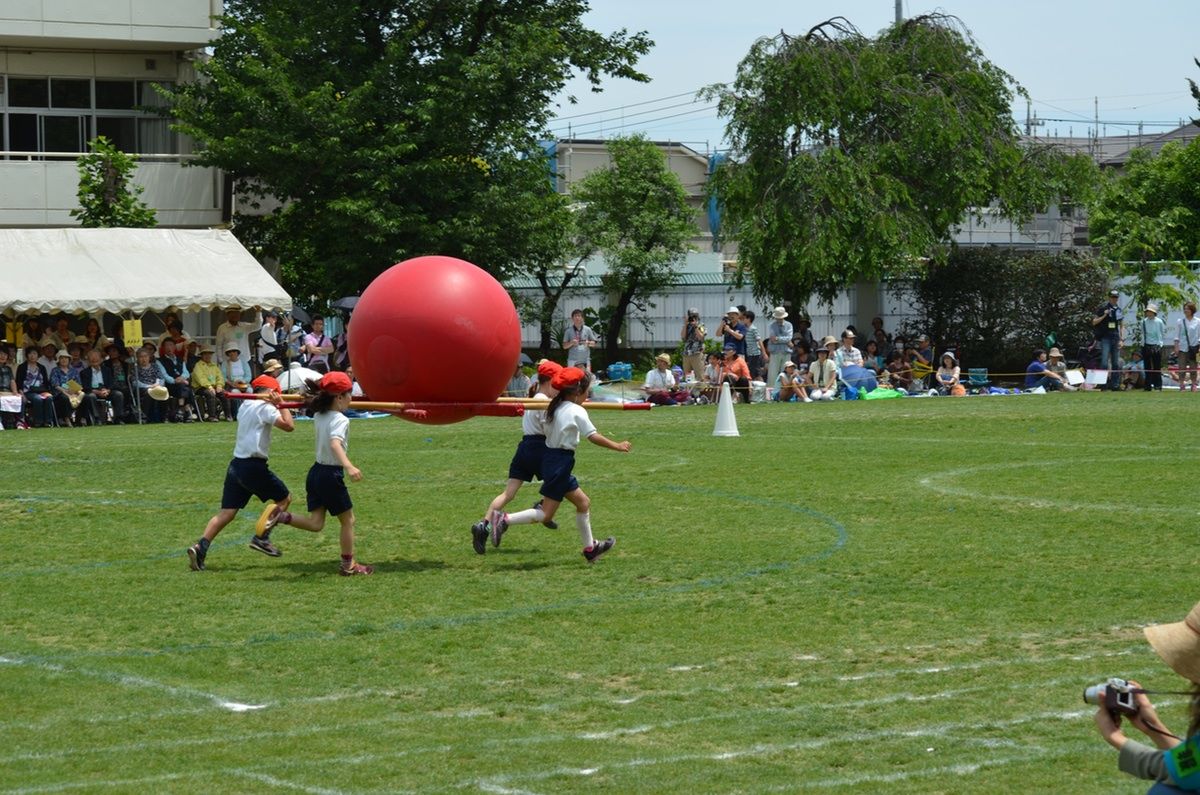 Four second-graders rush a giant rubber ball to the hospital.

The cutest event, I thought, was the ball-toss for first-graders. In between rounds of trying to hurl balls into a hoop, the little ones performed an adorable hip-shaking dance to music played at an increasingly manic speed. 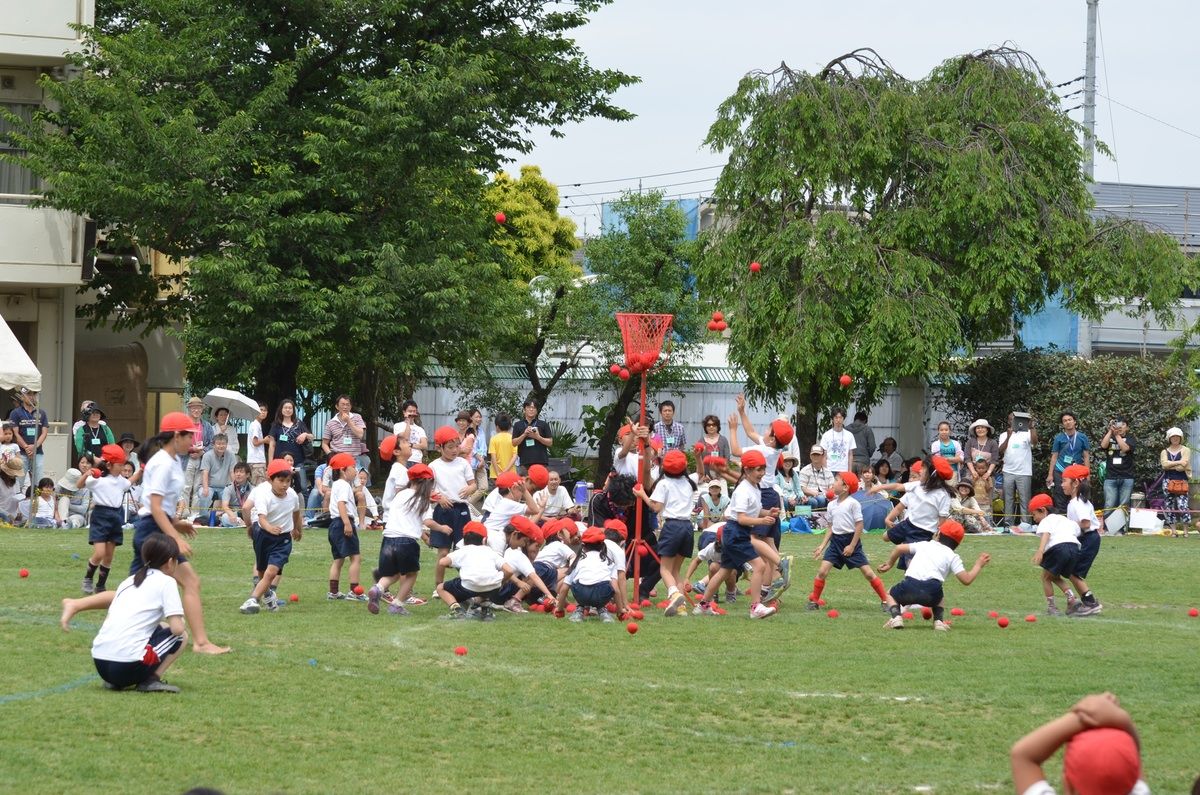 The little first-graders giving it a hurl.

Points were allotted for each event—usually 30 for the winning team and 15 for the second-place (or should I say last-place) team.

In between some of the events the students in each of the six grades also put on performances. My youngest daughter’s second-grade class performed a traditional Okinawan dance named Chābirasai, while my fifth-grade daughter and her classmates did the Nanchū sōran folkdance that originated in Hokkaidō. 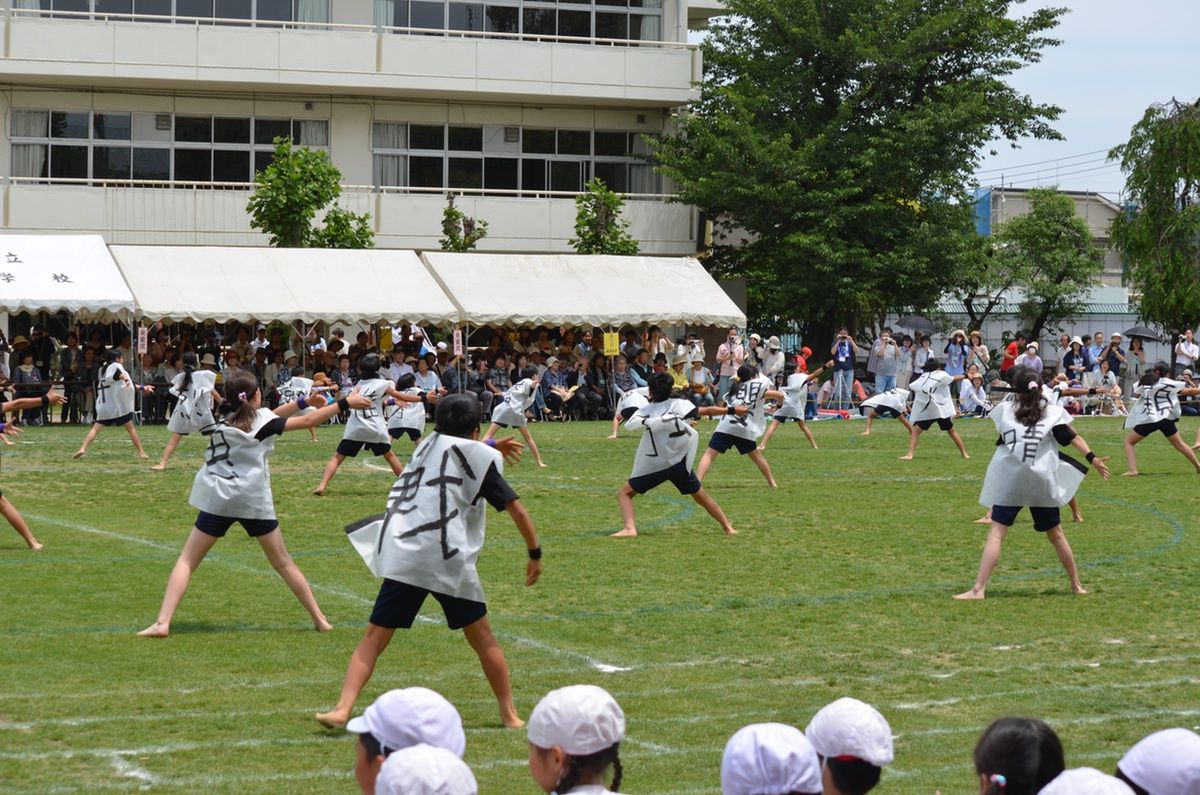 My daughter and her classmates performing the Nanchū sōran dance, with their favorite kanji characters written on their backs.

Like the team songs, these dances also seem to be pretty standard at undōkai across Japan. The sixth graders cap off these performances with a gymnastic routine that includes the formation of a giant human pyramid. 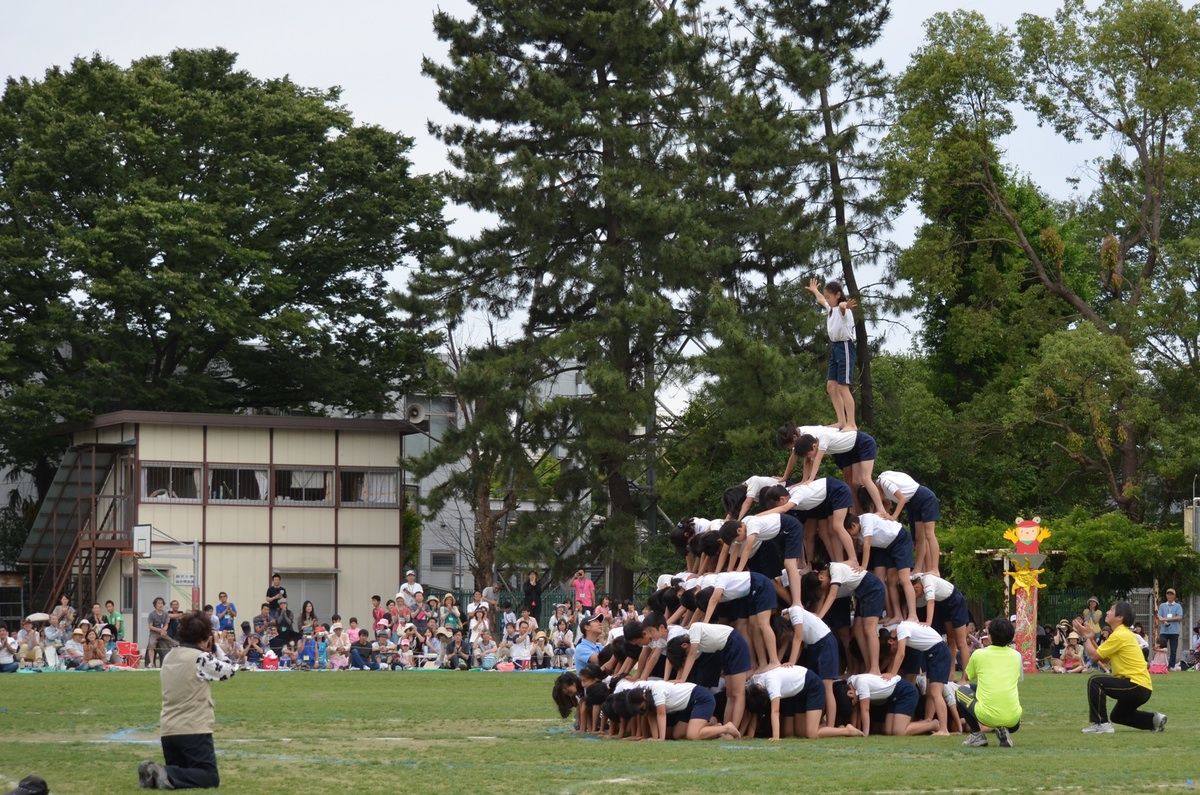 Sixth-graders cap off their gymnastic performance with a human pyramid.

The highlight of the day, though, was the running races, including the fifth- and sixth-grade relay race that culminates the undōkai. And it was here that I recouped a bit of the investment sunk in my camera. Switching to high-speed “sports mode,” I shot so many frames of my daughters running that I ended up with a sort of video of the events. 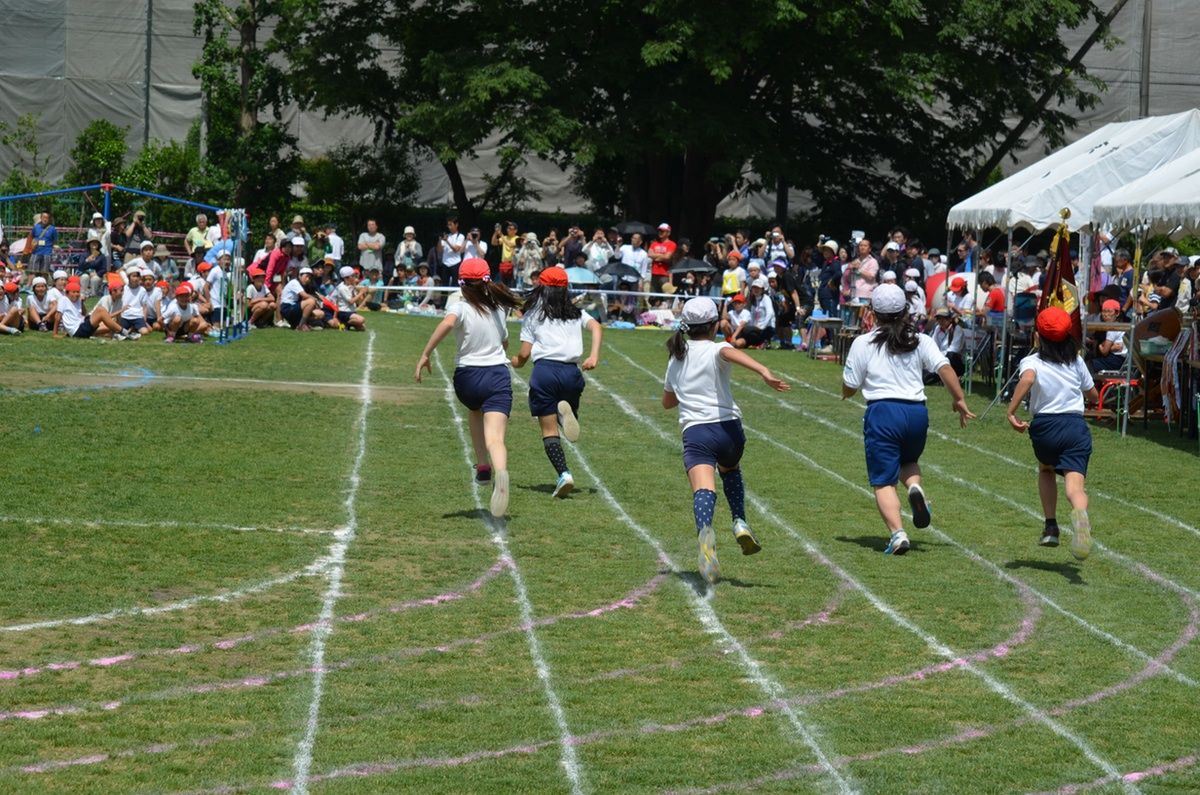 Thankfully there was no relay race for the parents—although I’ve heard that some schools do subject the adults to that indignity, putting their comfortably retired muscles to a sudden test.

Still, even without donning the sneakers, I felt pretty exhausted by the time the undōkai was near its end—and squinting through a telephoto lens had put my brain out of focus.

The day ended with (what else?) a closing ceremony and the unveiling of the final score. My daughters were thrilled to see that their Red team had pulled off a dramatic come-from-behind victory. A trophy was then bestowed on the winning team, and even the losing White team was handed a “second-place trophy” for its effort.

I packed up our things and headed home to sort through the 300-plus photos I had snapped. I’ll be back again next year, of course, perhaps with a sturdier plastic sheet and a couple of those folding chairs. (MS)