Fish Tears and Farewells: The Start of a Poetic Journey

The “Deep North” of Tokyo

In the spring of 1689, haiku master Matsuo Bashō began a five-month, 2,400-kilometer journey on foot that would take him around much of Japan’s largest island, Honshū. On the way, he visited numerous sites along the Pacific side that were already famous among the literati of his day, as well as breaking new ground on the wilder west coast. His account of the trek, The Narrow Road to the Deep North, includes some of his finest poems and has become a literary classic.

Bashō started walking exactly 325 years ago today (May 16), leaving from what is now the Kita-Senju area in the “deep north” of Tokyo. After traveling with friends by boat up the Sumida River, it was time to say goodbye at Senju. There Bashō wrote an emotional, if playful, parting haiku in which even the local wildlife is moved by the poignancy of the separation.

Senju had been a stop on the route north from medieval times. Tokugawa Ieyasu, later to become shōgun, had the first bridge built there in 1594, giving the area a major boost. By the time of Bashō’s journey it was well established as the first post station on the road to Nikkō and beyond. The poet describes a sense of being overwhelmed at the thought of the long journey ahead, perhaps betraying anxiety about leaving this place of relative safety.

Travelers from Kita-Senju are now much more likely to be on the train, as the main station is by some estimates Japan’s sixth and Tokyo’s fourth busiest, showing just how much it has become a part of the metropolis. Others might be speeding over the Senju Ōhashi, a bridge on National Route 4, the modern road north that stretches as far as Aomori on the tip of Honshū. You’d have to walk quite a way through the sprawl before reaching anything approaching wilderness.

With all the urban development, visual tributes to Bashō’s historic undertaking seem rather squeezed into the landscape. In particular, a mural depicting Bashō and his disciple Kawai Sora, who accompanied him through most of the venture, is tucked away under water pipes that run parallel to Senju Ōhashi. A statue more successfully fits into a thin piece of land off the main road, while a stone pillar commemorates the famous starting point to one side of the bridge. 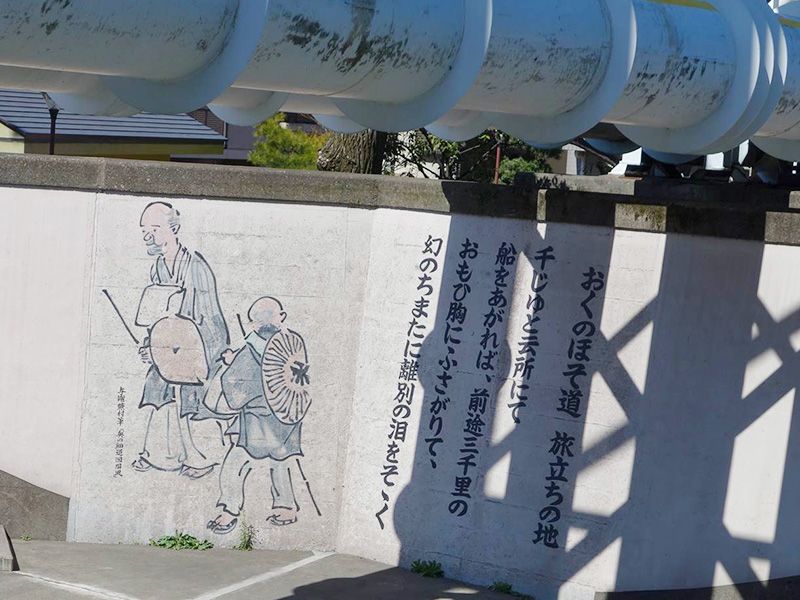 The mural of Bashō and Sora, somewhat overshadowed by water pipes.

The area has changed dramatically since Bashō stepped off the boat over three centuries ago, as have the other points he visited around the country. Reading The Narrow Road now, we might wish we were still able to see what he saw, before the transformations wrought by increased population and tourism. Still, while the retreat of nature is undeniable, it’s worth remembering that the book is not exactly a factual account.

Bashō’s disciple Sora wrote a journal about the same trip, which was lost for many years before being rediscovered and published in the twentieth century. Its contradictions of Bashō’s version of events show how the poet edited the facts when they didn’t fit his aesthetic vision. As well as inventing episodes to suit the mood, his many improvements on reality included describing an island from a location where it cannot possibly be seen.

So, when Bashō describes Mount Fuji that morning in Senju, faintly visible on the dawn horizon under the pale light of the lingering moon, I wonder whether everything came together so neatly. Maybe it did happen like that, but maybe it was another literary fiction. In any case, while these moments of perfection are commonplace in The Narrow Road to the Deep North, outside the ideal world of art we have to take our beauty where we can. 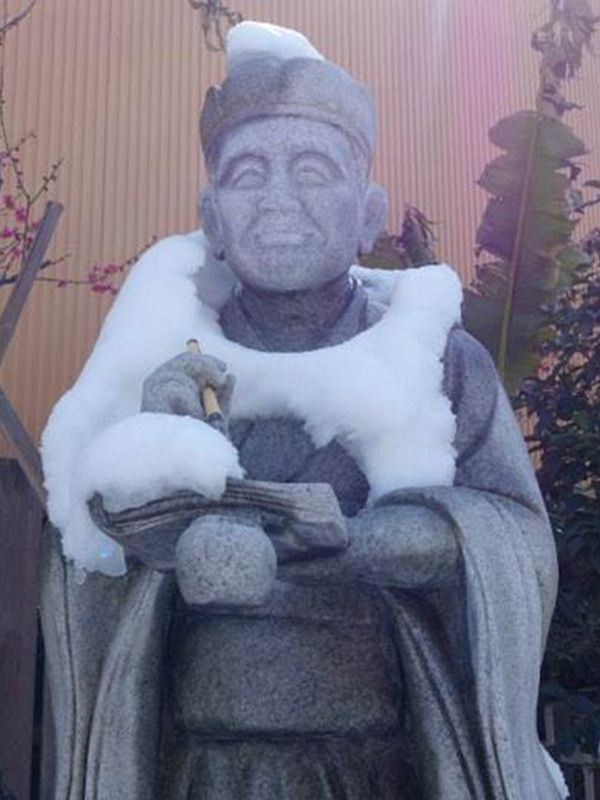 Bashō working on a winter-themed haiku.

Senju is certainly not the most famous location on the journey. That might be either the islands of Matsushima (on the coast of what is now Miyagi Prefecture), said to be one of Japan’s three most scenic views, or Hiraizumi (Iwate Prefecture), a once-flourishing city largely destroyed in the twelfth century, where Bashō wrote of the transience of past glories. Senju is not even the first place in the book, as his account begins before the boat journey in Fukagawa, near the center of the city.

However, alongside Fukagawa it is the most accessible location for Tokyo residents or visitors who wish to see where the hike began. I live not far away, so I visit from time to time to check in and see what kinds of haiku Bashō is writing to match the season. If I haven’t noticed the birds and fish crying each time I leave, it’s probably because they know that I’ll always be back.

(Banner photo: A stone pillar beside Senju Ōhashi indicates the starting point of the journey described in The Narrow Road to the Deep North.)