Communing with the Dead on Japan’s Terrible Mountain

Visitors to Osorezan, a sleeping volcano in the northern prefecture of Aomori, notice the pungent odor of sulfur well before they arrive at the grounds of the temple Bodaiji. I discovered this years ago while walking through the virgin forest that shrouds the enormous crater where the temple is located. Those accustomed to hot springs in Japan might associate the odor with relaxing dips in geothermally heated pools, but on Osorezan it announces your arrival in hell.

Legend has it that the priest Ennin founded Bodaiji in the late ninth century after receiving a message in a dream telling of a sacred mountain 30 days away from Kyoto on foot. If the priest was able to make the 1,000-kilometer journey from the capital in the allotted time to discover this remote—remotest might be a more accurate description—part of the Shimokita peninsula, it speaks undeniably of divine intervention.

But this shouldn’t be surprising since Osorezan, as the mountain is called in Japanese, is a holy place. In fact, along with Hieizan in Kyoto and Kōyasan in Wakayama Prefecture, it is one of the three holiest places in Japan. Known as a reiba, or sacred place, it is thought to serve as an ethereal way station, with spirits of the dead residing for a time before they are reincarnated, or they make their journey to the afterlife.

Piles of Stones and Prayers 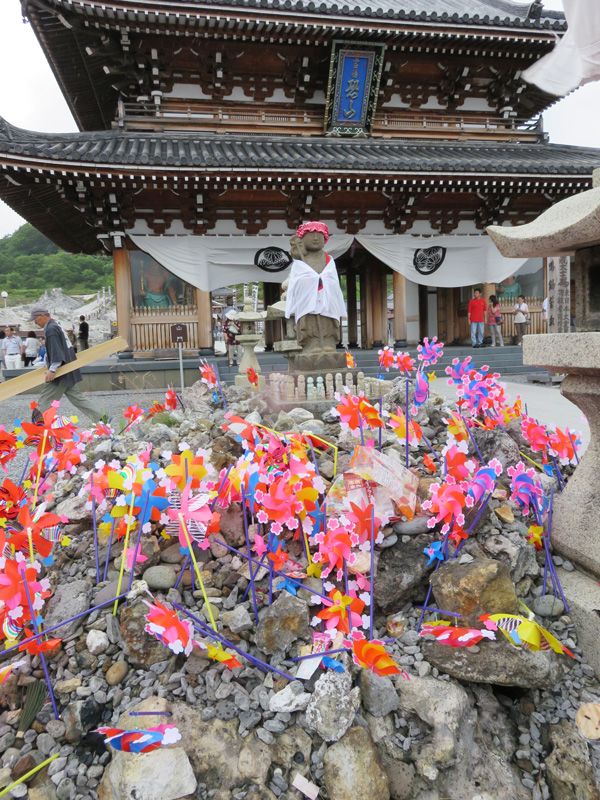 Osorezan is unique in that imagery of paradise—the eight peaks making up the rim of the caldera are compared to the eight petals of a lotus flower—exists side by side with tangible incarnations of hell. It is the scoured and smoldering landscape around Bodaiji that has beckoned pilgrims to this mountain for centuries. The name Osorezan, or “terrible mountain,” is said to derive from ushoro, a word from the indigenous Ainu language meaning “bay,” pointing to at an antiquity far deeper than the priest Ennin’s journey to the area.

I had already visited the mountain twice when I decided to time my third trip, taken last weekend, to coincide with the temple’s twice-annual festival. Once through the sanctuary’s gates, I followed a crowd of parishioners along the scarred and barren terrain past jagged outcroppings, smoldering vents breathing yellow smoke, and rust-colored, bubbling pools. This barren scene, carved by ancient volcanic activity, is revered and feared for its resemblance to Buddhist images of hell. But it is the palpable touch of the living, such as the countless mounds of carefully piled rocks, that infects the grounds with a looming eeriness. 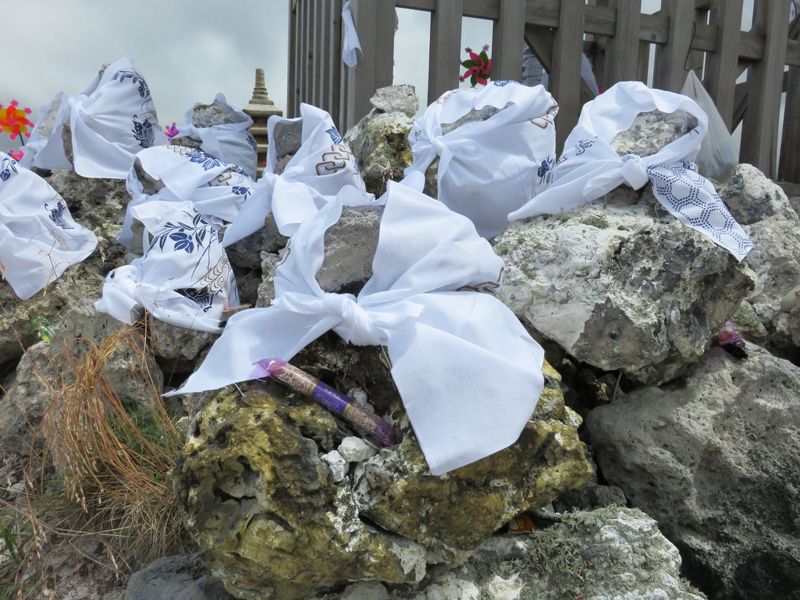 The interspersed piles of stones are trimmed with offerings—candies, pink and white pinwheels, ¥1 coins blackening in the caustic soil—laid in honor of lost loved ones. Folklore tells of children who pass before their parents being forced to build tsuka, or piles of stones, to the heavens to atone for their unfilial sin. The piles at Osorezan are in part attempts by the living to help these young souls in their chore. Standing and pondering this story, I counted the stones bearing the carefully penned names of those who had passed.

Shuffling slowly along the track toward Usoriko, the emerald-hued lake at the center of the caldera, I stopped to note a row of tiny statues of the bodhisattva Jizō, the patron of children, placed as part of the mizuko service for the souls of lost fetuses. At the eight-sided Hakkaku-endō hall, offerings of shoes, dresses, and hats give the site an appearance of a flea market. A temple hand mentioned as he carted away a bag of umbrellas how offerings of clothing have increased since the Great East Japan Earthquake in 2011, presumably brought by mourners to ward off the wet and cold suffered by those engulfed by the tsunami. On the hall’s altar someone had laid a plaque engraved with the names of an entire family.

The shore of Usoriko is ringed with offerings: cans of juice and beer, single-serving jars of sake, opened containers of Japanese sweets, and flowers stuck upright in the white sand. The lake is said to be lifeless, but if you gaze at the waves lapping at your feet you will notice yago (the aquatic nymphs of dragonflies) scurrying about, darting black bugs, and minute red worms twisting their way through the bubbling water. 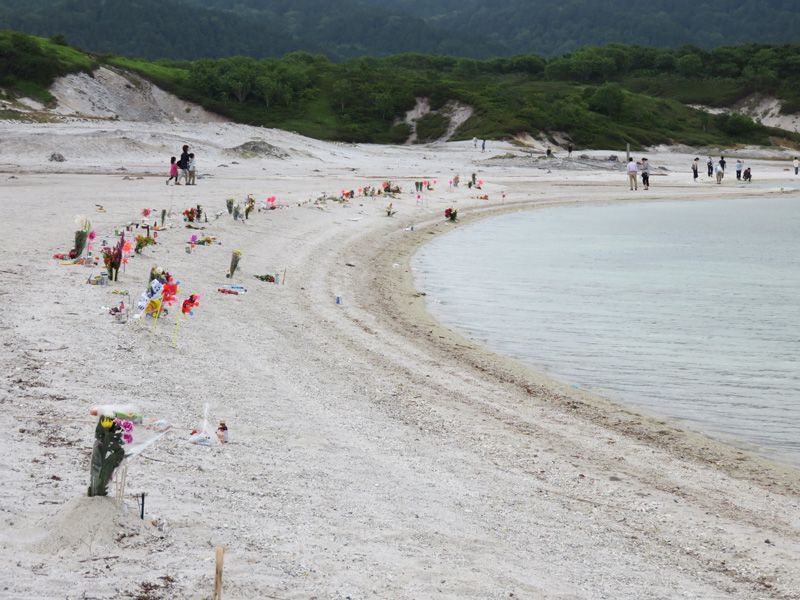 Lost in thoughts of death, I realized that the area around Osorezan is teeming with life. The forest surrounding the lake is spectacular in its beauty—it was compared to the Buddhist Paradise in Ennin’s dream—and is alive with the songs of sparrows, bush warblers, and swallows. Even along the winding path and in the cracks of orange-tinted boulders, wild hydrangeas bloom and mats of lichen cover the stony hillside.

Heading back toward the main hall of the temple, I stopped near another row of Jizō figures with matching blue towels carefully tied around their heads. An older woman invited some children nearby to join her in enjoying the offering of strawberries she had brought. As they nibbled, the woman smiled and told them: “These offerings are supposed to be enjoyed by the living, you know. It gives solace to the souls of the dead.” As the children thanked her and rose to leave, the woman cheerfully exclaimed, “No, it won’t do to have all these piled up here. Take some with you.” She then plucked items from the immense mound of offerings, stuffing their backpacks with packages of cookies, bags of snacks, and cans of juice and coffee—my voyeurism was rewarded with a can of beer and a tray of steamed sweet cakes—while repeatedly saying, kuyō ni naru, “it’ll bring comfort to the dead.”

Communing with the Dearly Departed

Some come to Osorezan to comfort those that have passed, others to mourn, and yet others to commune with lost relatives. Itako, traditional and often blind spiritual mediums, are another part of the landscape here. Mostly elderly women, the itako are said to be able to channel the spirits of the deceased in a ceremony known as kuchiyose. During the festival they set up tents just inside the temple gate, where customers sit for hours waiting for their turn to converse with the dead. A relic of a different age, the itako are slowly vanishing as modern norms march on: there were only four tents this year, while during a visit a decade earlier there had been at least twice that many. 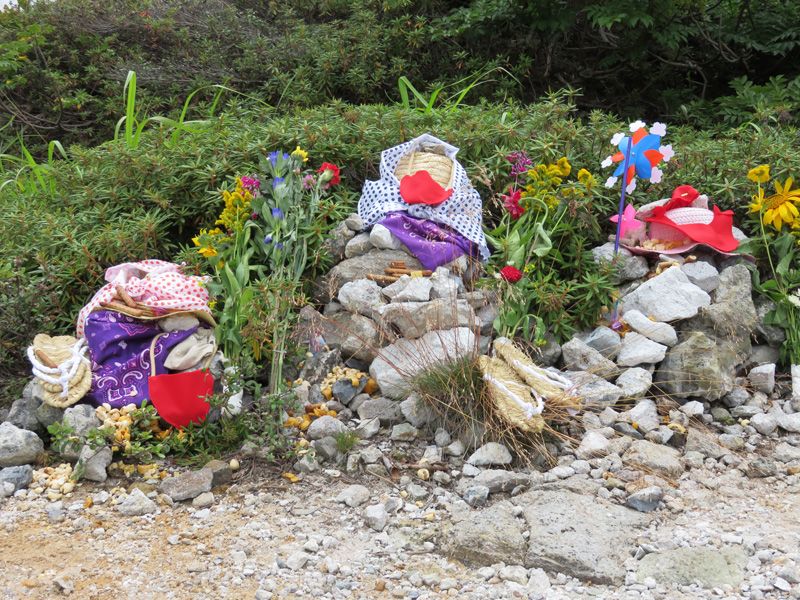 The aura of death casts a gloomy spell on the terrible mountain, but as I ascended out of the caldera I pondered the importance of visiting Osorezan. The mounds of rocks, stone statues garbed in towels, piles of sweets and snacks, and rows of delicately hung clothing are as much about consoling the living as comforting the dead. And with my recently acquired offering in hand, the bus took me back to the world of the living as I repeated the woman’s words. Kuyō ni naru.

(Banner Photo: Pinwheels spin in the breeze as a stone Buddha garbed in towels keeps watch over a carefully piled mound of stones.)