Shikoku, the smallest of Japan’s four main islands, is perhaps most famous for its 88 temples associated with the priest Kūkai, a key figure in Japanese Buddhism. A 1,200-kilometer pilgrimage route known as the henro taking in all of the temples is popular with both devotees and dedicated tourists. But is certainly not all Shikoku has to offer. And with only five mid-September days to travel, I chose a more modest, though still busy, itinerary.

My first stop was Ritsurin Garden, completed in the mid-eighteenth century. Located in Takamatsu, the capital of Kagawa Prefecture, it is considered one of Japan’s most beautiful gardens. The highest vantage point gives a view across a crescent-shaped bridge and the green waters of the Nanko Pond in the foreground to a traditional Japanese teahouse nestled in front of the tree-covered Mount Shiun in the background. 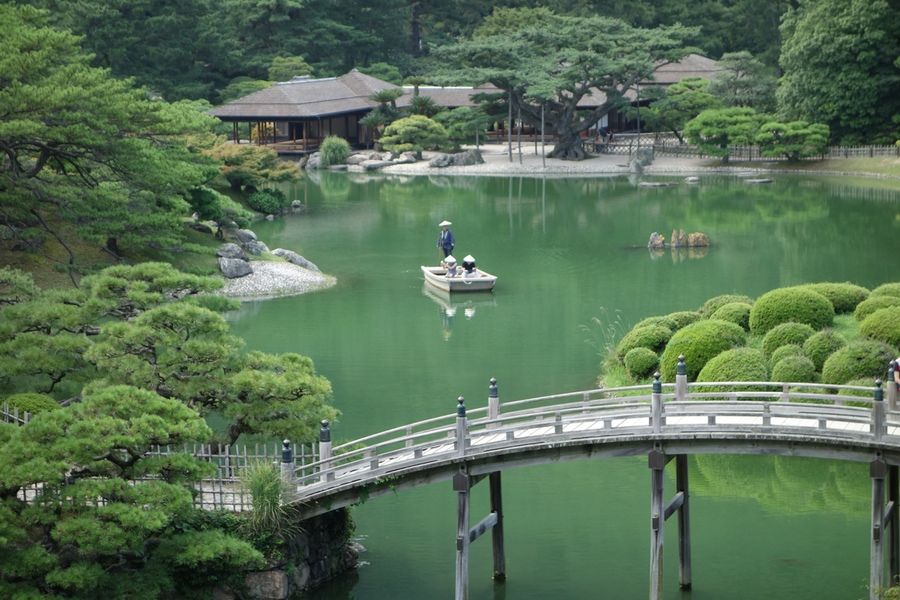 If you are lucky, there may be a boatman sporting a conical hat as he steers visitors around the pond. The relative quiet was certainly noticeable compared with well-known gardens in more popular locations like Tokyo and Kyoto. Human visitors were outnumbered by the carp and turtles, and a heron was also on hand to enjoy the gardens. 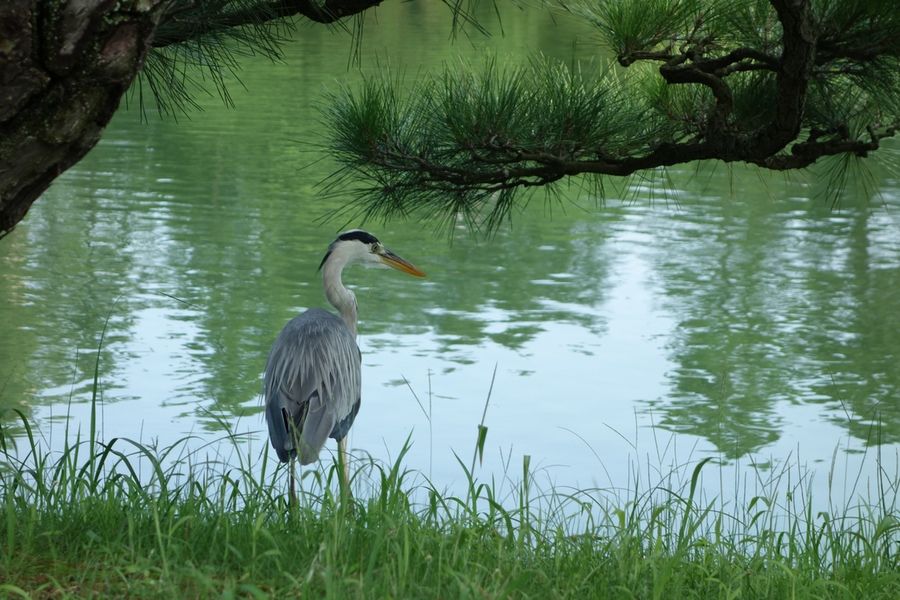 Naoshima, an island inundated with art 50 minutes by ferry from Takamatsu, was my destination on the second day. You can hire a bicycle, which seemed to be the most popular way to get around, but it’s also possible to walk to the island’s locations. Of the many museums and exhibition sites, the Art House Project in the east of the island seemed most intriguing. It consists of seven sites scattered around a small village. (A standard ticket only allows you to visit six.) 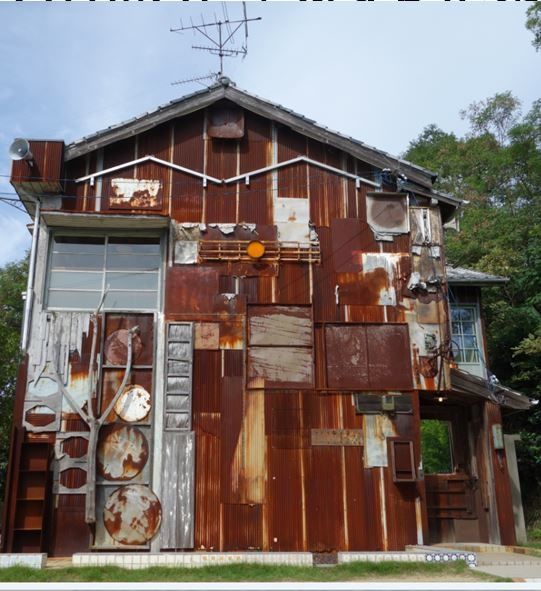 Once a dentist’s office, the Haisha installation is now part of Naoshima’s Art House Project.

My favorite of these sites was Haisha, a converted dentist’s office in which masses of currency, maps, comic pages, postcards, and other paper were visible under the clear plastic flooring and a plaster version of the Statue of Liberty rose up to the second story in one of the rooms. I also liked the strangely soothing Kadoya, where dozens of digital displays cycled through the numbers from one to nine as they floated on a pool in a darkened room.

In the south, the expensive Chichu Art Museum has just a handful of exhibits. They do, however, include one spectacular room with pure white walls and five Monets from the Water Lilies series, the setting bringing the colors to rich life. The Benesse House Museum is more like a typical modern art museum; there are also numerous sculptures to discover in the surrounding area. Discovery is the theme in Naoshima, which is thoroughly recommended.

A Bathhouse, a Castle, and a Temple in Matsuyama

Entering the holiday weekend, I took a Saturday train across the north coast to Matsuyama, capital of Ehime Prefecture and the largest city in Shikoku. On the way, I detoured to Kotohira to climb the 785 steps to the shrine Kotohiragū, dedicated to Konpira, a traditional protector of sailors. In more recent times, astronauts have also made offerings at the shrine. There are 583 more steps to the inner shrine, which offers a decent view over the town. 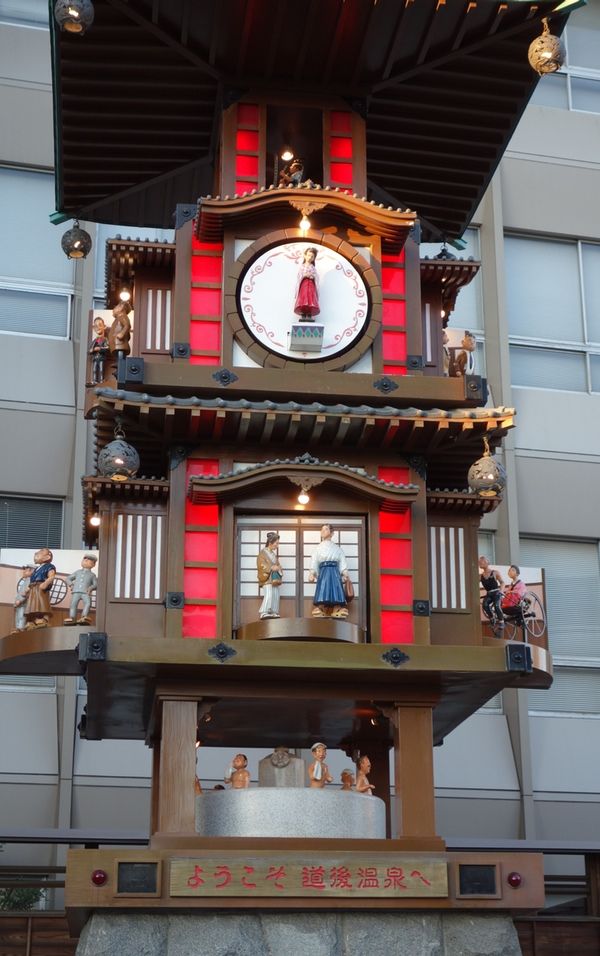 A big draw for Japanese tourists in Matsuyama is the Dōgo Onsen public bath, one of several inspirations for the bathhouse in Miyazaki Hayao’s Spirited Away. It is also among a number of sites in Matsuyama associated with Natsume Sōseki’s classic novel Botchan. After checking into the Sen Guesthouse (friendly and comfortable), I watched the Botchan Clock beside the onsen as at six o’clock it started transforming and growing into a multilevel array of moving characters from the novel.

Japan has many fine castles, and the three-story Matsuyama Castle is an excellent example. Inside there was good information in English on the castle’s history, dating back to the seventeenth century. And as with Ritsurin Garden, the relative lack of crowds made it a more enjoyable experience for me than at other castles I’ve shuffled around in an endless line. Look out for stray cats; there seemed to be plenty around in Matsuyama.

My final point of call was the temple of Ishiteji, also in Matsuyama, one of the 88 on the henro route. I saw pilgrims in both traditional white garb and ordinary clothes reciting sutras while I was there. Within the grounds is a glorious clutter of statues, colorful pictures, and structures, making this much unlike most other temples in Japan. Some statues have come from India and there is a general air of exoticism.

At the rear of the temple is the entrance to a long, dark tunnel from which you emerge to find grotesque carved figures and other oddities in and around the inner grounds. A large statue of Kūkai stands on a nearby hill; you can scramble up to get a closer look. It really did feel like I never knew what I was going to see next at Ishiteji, making it a perfect end to my discovery of Shikoku. 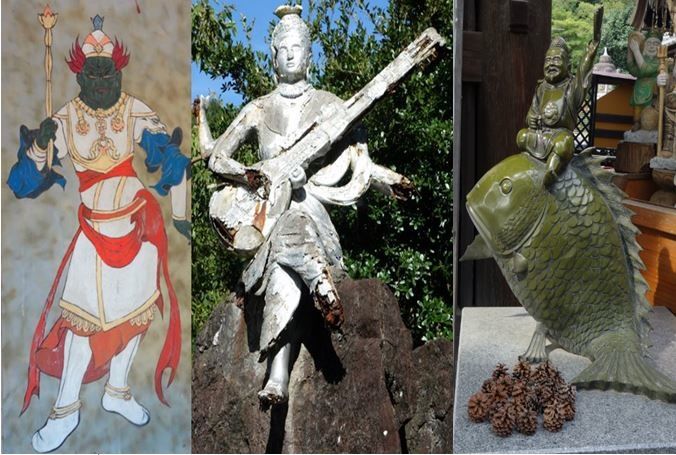 Seen in and around Ishiteji.