For over a thousand years, Yamagata Prefecture, on the Sea of Japan side of the northern Tōhoku region, has drawn pilgrims and mystics to its mountains. As the native Shintō faith intertwined with imported Buddhism, Yamagata became the site for scores of shrines and temples, some of which remain to the present day.

Pilgrimage to the Three Holy Mountains

The holiest of all the sites in the region are the three sacred mountains of Dewa, or Dewa Sanzan (literally: “three mountains of Dewa”): Gassan, Haguro, and Yudono. These peaks boast what is thought to be Japan’s longest history of mountain worship, stretching all the way back to Prince Hachiko, a sixth-century royal who devoted his life to religion, establishing centers of worship on all three mountains.

The five-story pagoda of Mount Haguro.

The slopes of Mount Haguro, the lowest and most accessible of the three sacred peaks, are particularly rich in shrines, Jizō statues, and other religious iconography, along with a stunning five-story wooden pagoda built without nails in 1372, itself a reconstruction of a similar monument built over a thousand years ago. Historical figures like the great poet Matsuo Bashō and the twelfth century warrior monk Benkei are also said to have lingered on this hallowed ground.

After the area was visited in the late seventh century by their spiritual forebear En no Gyōja, the three Dewa peaks became a site of great importance to the yamabushi (literally, “those who lay in the mountains”), a sect of ascetic adherents of Shugendō, an ancient religion combining aspects of Shintō and Buddhism.

Shrines at the base of Mount Haguro.

These mountain mystics, clad in white and saffron robes and bamboo skullcaps, revere the fearsome-looking divinity Fudō Myōō and devote themselves to the contemplation of nature and study of martial arts. In the village at the base of the mountain are numerous lodgings that still host these pilgrims, serving traditional vegan shōjin ryōri in the austere quarters of the often thatched-roofed buildings.

Self-Denial in Pursuit of the Inner Buddha

The monks from the area around nearby Mount Yudono became famous for an even more rigorous strain of asceticism, with rather macabre results. 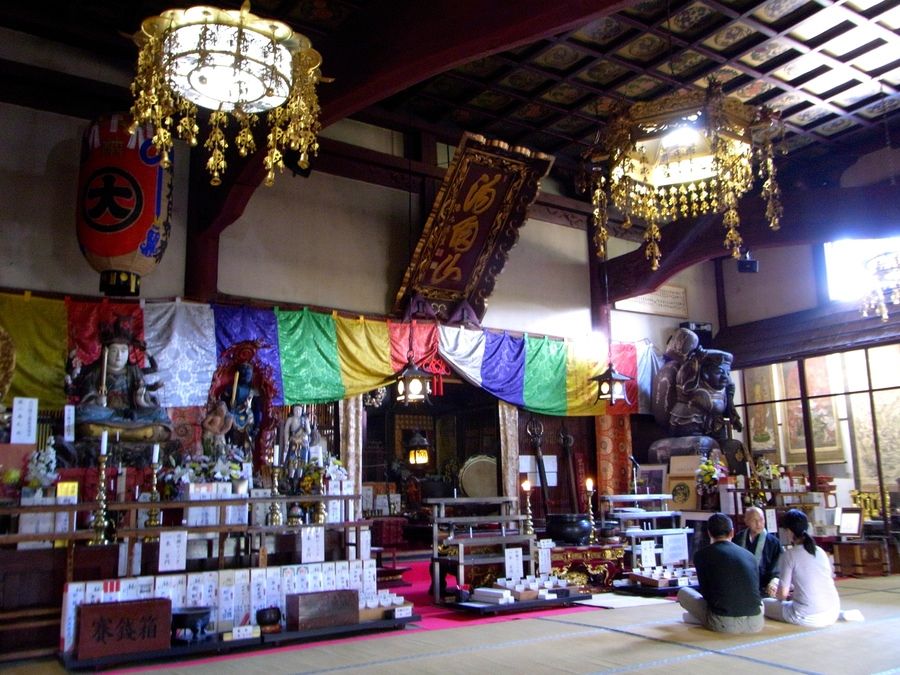 The main hall of Dainichibō.

The temple Dainichibō stands near a prehistoric cedar tree beneath which, according to Chief Abbot Endō Yūkaku, Mimorowake—son of the first century Emperor Keikō—is buried. The original temple is said to have been established in 825 by Kūkai, the pioneer of esoteric Buddhism. Among his many teachings, Kūkai espoused the concept of sokushin jōbutsu: that all living things carry within them the potential to attain Buddhahood. 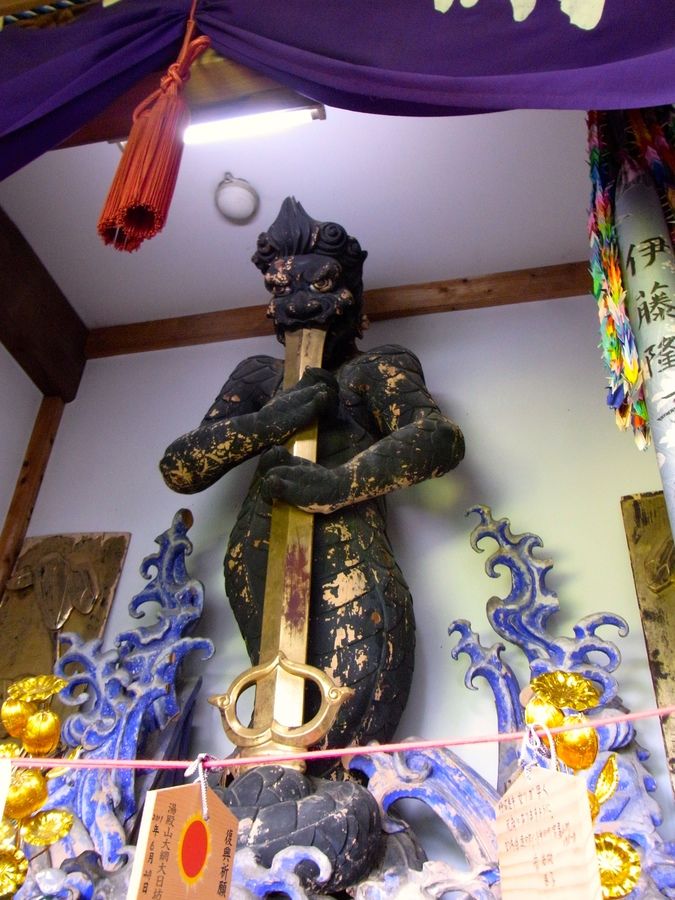 Over the centuries, with this aim in mind, some devout followers attempted to mummify themselves prior to death through a punishing six-year regime. For three years they kept to a meager diet of nuts and berries while exercising relentlessly to eliminate body fat. This was followed by a further three years eating only bark and roots. In the final phase, they drank preparations made from the arsenic-laden water of a local spring and the lacquer-like sap of the urushi tree, eliminating intestinal bacteria and essentially varnishing their innards.

At the culmination of the process, a monk would enter a narrow stone pit and assume a position of prayer. This tomb was covered with a stone slab through which protruded a bamboo pipe to enable the subject to breathe. Each morning, if still alive, he rang a small bell. When the chimes finally ceased, the other priests would remove the pipe and seal the tomb, leaving it for a thousand days.

Frozen in Prayer for All Eternity

When the lid was opened, in most cases, the tomb contained a rotten corpse. But if everything had gone according to plan, there would be a perfectly preserved mummy, still in the lotus position. This sokushinbutsu would be transferred to the temple, dressed in lavish vestments, and revered as a Buddha—one who had not died, but had rather entered a state of perpetual prayer for the benediction of mankind. 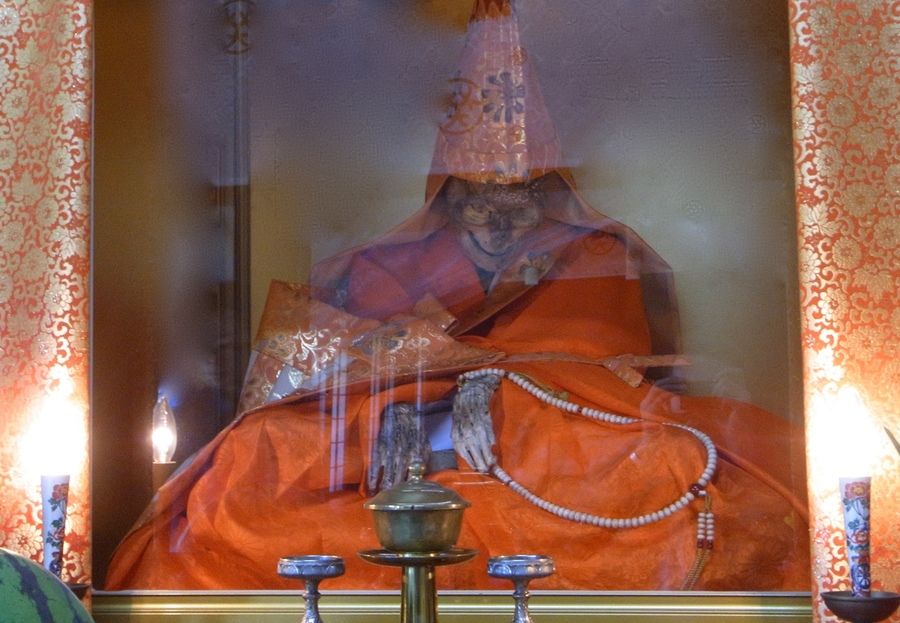 Shinnyokai-shōnin, the sokushinbutsu of Dainichibō.

Along with an incredible collection of antique statues, some dating back to the Nara period (710–94), Dainichibō is home to the sokushinbutsu Shinnyokai-shōnin, a priest said to have achieved Buddhahood in 1786, at the age of 96. The nearby temple Chūrenji (also founded by Kūkai) also hosts a sokushinbutsu named Tetsumonkai-shōnin, as well as a series of sumptuous murals—some antique, some modern—decorating the ceilings of its many chambers.

Chūrenji (left) and one of the ceiling murals from the temple’s interior (right).

In all there are some two dozen sokushinbutsu worshipped at temples throughout this region. Although monks attempting the feat became so numerous in the nineteenth century that the Meiji government outlawed the practice, Yamagata Prefecture remains the only place where successful sokushinbutsu exist.

Changing the Image of Tōhoku

Down in the prefectural capital of Yamagata, meanwhile, with the exception of Yamagata Castle (currently under renovation), there seems to be very little of antiquity. There are some lovely Western-style buildings from the Taishō era (1912–26), but the overriding impression is one of concrete. 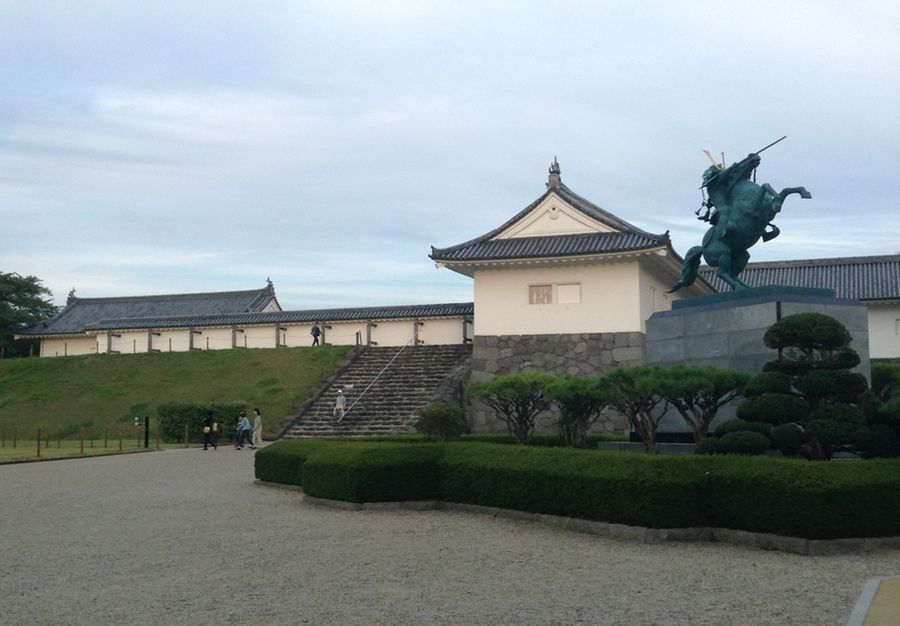 Starting this year, in a bid to restore some vitality to this once-bustling town, a team from the Tōhoku University of Art and Design teamed up with the Agency of Cultural Affairs and the Tōhoku Revival Services Organization to organize the Yamagata Biennale, a citywide art event to be held every other autumn. As with another international cultural event hosted in the city, the Documentary Film Festival, the Biennale aims to change the image of Tōhoku by deepening ties between the arts and the local community and enterprises, in the process drawing on the region’s distinctive history and customs.

The grounds of Yamagata Bunshōkan are scattered with interactive exhibits.

An exhibition of work by Arai Ryōji at Yamagata Bunshōkan.

“The perception of Tōhoku is of a harsh, grey place, somewhere to be endured,” explains Biennale director Miyamoto Takenori. “But that’s not the case. The winters are long, but that only means that colors are felt all the more keenly when the spring light comes flooding in, and that the green of summer seems even more vivid. I think Tōhoku people actually have a much stronger sense of color.”

He also describes a drive to create a welcoming avenue for people to engage with the arts in a spirit of “discovery and learning,” and many of the exhibits at a number of sites around the city are highly interactive, including workshops on pickling and candle-making, as well as an oddly-shaped soccer pitch in the courtyard of the city’s historic Bunshōkan, the former prefectural office now used as a museum. In the nearby Manabikan (literally “learning hall”), a disused elementary school building, there is also a comic-drawing activity starring local artist Arai Ryōji’s yamabushi-inspired character Hosomichi-kun.

Yamagata’s ascetic heritage finds echoes throughout the Biennale. On display are the savant scribblings of Sugano Sakae, who emerged fully formed on the art scene in his seventies after years of pursuing his art while working at a local fish market, and soundscapes by the nomadic artist and instrument builder Suzuki Akio, who has long viewed nature and his surroundings as his chief sonic collaborator.

The festival’s extensive musical program includes a number of performances bringing together dancers and visual artists with esteemed performers including the husband-and-wife pop unit Tenniscoats, the musical improviser Ōtomo Yoshihide, and the balladeer Aoba Ichiko. Biennale vice-director Iwai Tenshi, who curates this program, notes: “We want to bring people a sense of what ancient ascetics might have experienced in a cave on one of Yamagata’s holy mountains, or help them hear the sounds of the prehistoric Jōmon period.” 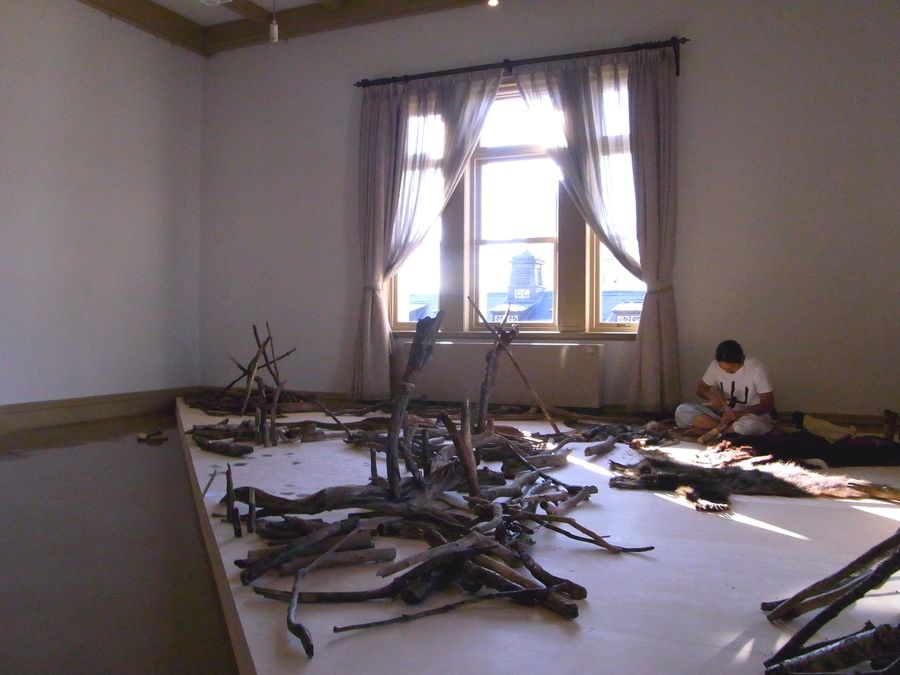 Sakamoto Daisaburō whittling additions to his exhibition at Yamagata Bunshōkan.

One participating visual artist with particularly strong ties to this heritage is Sakamoto Daisaburō, who visited the Dewa Sanzan in 2006 and was bitten by the mystical bug. In 2009 he decided to leave Tokyo and relocate to the area, becoming a full-time yamabushi. “I was interested in the roots of Japanese arts and crafts, and it turned out that all sorts of traditional performance—kabuki, nō, and the like—had strong ties to the yamabushi. I became fascinated by this lifestyle and the aesthetic influence of nature and the mountains. I thought it would be interesting to make my own art while following in such ancient footsteps.”

One of the world’s oldest, and most rigidly ascetic, religions is Jainism, which is thought to have originated in India as early as the ninth century BC. The pacifist, celibate followers are known for gently sweeping the ground before them with a soft brush to avoid trampling insects as they walk and observing a strict vegetarian diet that avoids the use of onion and garlic. How interesting that Yamagata should also be the location for a restaurant that purports to serve Japan’s only Jain curries. The richly flavorful dishes are a far more attractive choice for the hungry visitor to Yamagata than tree bark, roots, and arsenic.

(With thanks to Dainichibō, Chūrenji, and the Yamagata Biennale. The 2014 Biennale runs until October 19. Banner photo: Shinnyokai-shōnin, the sokushinbutsu of Dainichibō, Yamagata Prefecture.)