Since its release in July 2013, the video game Yōkai Watch has rapidly risen to megahit status in Japan. The game’s characters now star in their own animated program, as well as adorning everything from snack packages to trains. Level-5, the company that produces the game, has taken great care in engineering its blockbuster for surefire success, borrowing winning ideas from a number of other franchises. The breakout popularity of the game has prompted daring comparisons to Japanese superstar Pokémon, with some even saying it has the potential to surpass its predecessor.

Popular on the Playground

The game derives its name from the invisible supernatural spirits, yōkai, that live side by side with humans. A special timepiece allows players to see these spooky beings. Gameplay closely follows the tried-and-true formulas of earlier monster-based smash hits, revolving around the collection and management of an extensive cast of netherworld creatures. Japan has countless yōkai running through its folklore and popular culture, and anyone who has seen such Studio Ghibli films as Spirited Away or My Neighbor Totoro will understand the limitless potential for kawaii cuteness that they possess. Judging by the immense popularity of characters like the lovable cat spirit Jibanyan and the capricious ghost Whisper, Level-5 has hit the nail on the head with its creations. 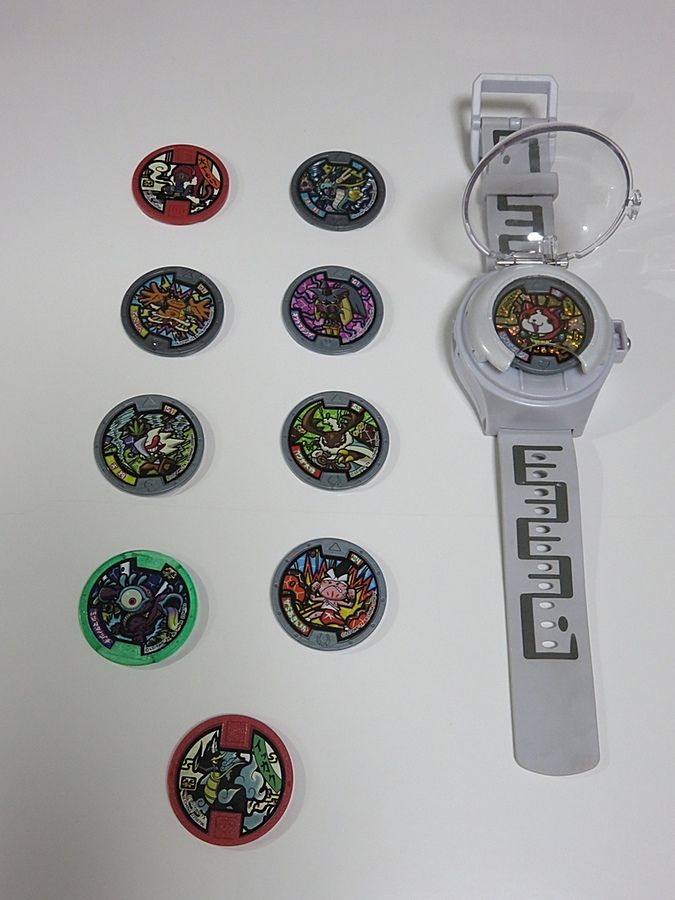 Aimed mainly at elementary schoolers, Yōkai Watch has become a favorite topic at parks and playgrounds around the country. Not surprisingly for Japan, it has also created a fair amount of buzz among more mature gamer sets. Cartridge sales for Nintendo’s 3DS have been respectable for all three installments of the game, which together have sold upward of 4 million units. Demand for tie-in items has also been high, with toymaker Bandai expecting total sales for game-themed merchandise to reach ¥10 billion by the end of the fiscal year.

Among all items, yōkai medals have been the hottest. Demand for these palm-sized plastic coins, each featuring a different character from the game, quickly outstripped supplies, forcing fans to line up outside shops or hunt for medals online. QR codes on the coins allow them to be integrated into gameplay, but use is limited to once per game, forcing players to invest in new medals as they progress. Yōkai medals also serve as trading cards, making them hot items even for those who don’t have game consoles. This dual strategy has paid off handsomely for Level-5, with the company expecting 100 million of the coins to sell by year’s end.

Level-5 CEO Hino Akihiro has been upfront about borrowing when developing the game. In an interview, Hino cited Doraemon as a major inspiration in character design, especially for the human characters. It is not hard to notice similarities with other series when watching the Yōkai Watch cartoon, but Hino notes updates to the characters to make them more in tune with today’s young fans. As in Doraemon, gadgets play an important role. But instead of being futuristic, they are along the lines of the smartphones, tablets, and other devices that players use every day.

The social mores of the series have also been updated. Hino points to how children nowadays place higher value on getting along with others in their group than on competition and victory. As a reflection of this, players of the game do battle, but instead of vanquishing foes, they collect new yōkai by defeating them and then becoming their friends.

Having tasted the fruits of domestic success, Level-5 now appears ready to take the series to North America and Europe. Some remain dubious about the game’s potential, however, pointing to its strong Japanese storyline as a significant barrier to the franchise reaching the highest pinnacles of success overseas.

Yōkai Watch has indeed been fine-tuned for the Japanese market. A smoothly coordinated localization of the game and animated series will clear away many potential linguistic hurdles, but there still is the problem of the yōkai themselves.

In Japan, these creatures have frequently played educational roles associated with specific aspects of daily life. Even today, a finicky child might be told their leftover dinner will attract mottainai obake (spirits drawn to wasted food). In general, yōkai are known for spooking people and causing problems, but unlike zombies and other nefarious monsters found in the West, they are mostly uninterested in humans.

Yōkai are an intrinsic part life in Japan, making Yōkai Watch easy for Japanese kids to embrace. But for children in other markets, a purple blob of a creature like Donyoriinu, whose most wicked act is causing parents to bicker, might not have the same appeal as a cute monster that can shoot lightning.

Unfamiliarity will likely turn out to be a nonissue, though, as the game is engaging and the yōkai are quirky and fun. Selling something so quintessentially Japanese will certainly be a challenge for Level-5, but judging from how the company has engineered the game and the world’s growing interest in all things kawaii, we might just see Yōkai Watch turn into the Japan’s next big cultural export.