Last month, “Santa Yamashita” emerged triumphant at the Santa Winter Games 2014 in Sweden to become the first Japanese winner of the competition. Held in November each year, before the world’s top Santas enter their busy season, the games have taken place since 2003. Yamashita Kōhei saw off opponents from Hong Kong, Australia, and many other North Poles in such events as speed porridge eating, riding a rodeo reindeer, and present stacking.

Yamashita showed his mettle in the porridge eating in particular, knocking his bowl back in six seconds for a crushing victory and stirring memories of his countryman Kobayashi Takeru, legendary speed-eater of hot dogs. And although he was thrown from the mechanical reindeer earlier than other Santas, wins in the present stacking and Santa triathlon ensured him of his overall first-place finish. Yamashita did his best to look the part, too, by getting his hair and beard dyed white especially for the contest.

A first Japanese Santa of the Year may represent another stage in the cheery present-bringer’s slow infiltration into the nation’s traditions. The first time Christmas was marked in Japan was in 1552 at a church in what is now Yamaguchi Prefecture, but this was a religious service—and one that took place well before Santa emerged as a central Christmas figure to boot. In fact, given that Santa Claus only really became popular in the nineteenth century, his Japan debut was not especially late.

In 1874, Hara Taneaki, an official at a Tokyo magistrate’s office, held a Christmas party at a girls’ school in Tsukiji, where the foreign settlement was based. On hearing of this plan, the US legation sent four officials along the day before the event to make sure everything would be in order. They objected to and removed a cross fashioned from mandarin oranges, on the basis that it was Catholic.

However, the Christmas tree did survive their check, as did the first appearance of Santa Claus. Dressed in a samurai’s typical everyday garb, the kamishimo, complete with two swords, as well as a cheap wig, he was much unlike the concept of Santa that was then fast developing into its modern form in the United States. It would be several more decades before Santa would start making an impact in Japan.

In the Taishō era (1912–26), Christmas steadily grew in popularity. A Yomiuri Shimbun article on Christmas Day, 1920, noted that seasonal decorations could be seen not only in fashionable Tokyo shopping districts like Ginza and Nihonbashi but also at toy shops in small suburban towns. Then, as now, it was a secular celebration for most Japanese. “People who have not read a single line of the Bible give Christmas toys to their children and throw coins into Salvation Army collection plates,” the article notes.

Santa Claus was a part of the seasonal trappings at that time. By then, he looked much the same as he did in the United States. But as relations deteriorated between Japan and the United States in the 1930s, Santa and Christmas became unwelcome symbols of Westernization. With the gap of many years before Christmas returned in the postwar era, it is easy to forget how widespread the celebrations were in early twentieth-century Japan. 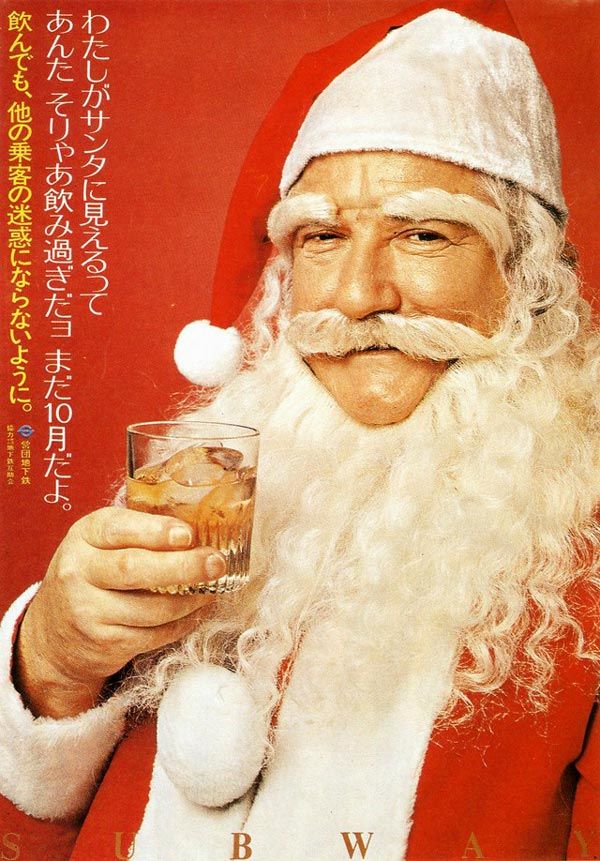 A festively tipsy Santa makes a 1976 appearance on this subway manners poster.

However, since Santa’s comeback in the late 1940s there have been no major obstacles to his steady conquest of December in Japan. By 1976, he was more than familiar to the subway users who were the target of a playful poster asking drunk patrons to behave themselves. “You think I look like Santa? Well, that’s because you’ve had too much to drink. It’s only October. If you drink, don’t be a nuisance to other passengers.”

The jolly man from the North Pole also featured in the early days of one distinctive aspect of festive Japan, the association of Christmas Eve with romance. While it is difficult to pinpoint the exact beginning of the tradition, a 1983 special feature in women’s magazine An An on winning your man’s heart is thought to have been influential, as is singer Yamashita Tatsurō’s 1983 hit of lost love “Kurisumasu ibu” (Christmas Eve).

Matsutōya Yumi’s 1980 song “Koibito ga Santa Kurōsu” (Santa Claus Is My Sweetheart) played its part too, reimagining portly Santa as a dream lover. Although not released initially as a single, it has been covered many times, particularly after its inclusion in the 1987 box-office smash Watashi o sukī ni tsuretette (Take Me Skiing), and has become a Christmas classic. So Santa had a guest role, at least, in the move toward including couples and romance alongside families and presents.

Meanwhile, in the last few decades Kentucky Fried Chicken has exploited the resemblance between Colonel Sanders and Santa to dress up the former as the latter and turn Christmas into a chicken-based holiday. Many Japanese people think the season is not complete without a trip to KFC. But while the festive man in red, like the colonel’s grub, has long been viewed as an import, if Yamashita Kōhei can capitalize on his win in Sweden, we might just see more Japanese Santas.