Two things that could be said to characterize holidays in Japan are crowds and queues. Be it the snaking, slow-moving lines for the most popular Disneyland attractions during the summer break, or the multitudes that throng every park during the spring hanami season, expect to see people, and lots of them.

New Year’s Day is no exception. In contrast to the ghost-town tone of many cities in other parts of the world on the morning after the festivities of New Year’s Eve, there are locations where you are guaranteed to find bustling activity, among them places of worship.

Hatsumōde is the first shrine visit of the year. On January 1–3, many in Japan take advantage of the national holidays that kick off January to head to a Buddhist temple or Shintō shrine to pray for good fortune in the year ahead, with the most popular sites attracting immense crowds. While there, between the waiting and the brief moment of communion with the gods, it is also common for pilgrims to pick up a mamori charm and burn the last year’s on a specially prepared pyre, to write wishes on an ema wooden plaque, or, for those feeling lucky, to draw a mikuji fortune slip to forecast their happiness over the next 12 months. 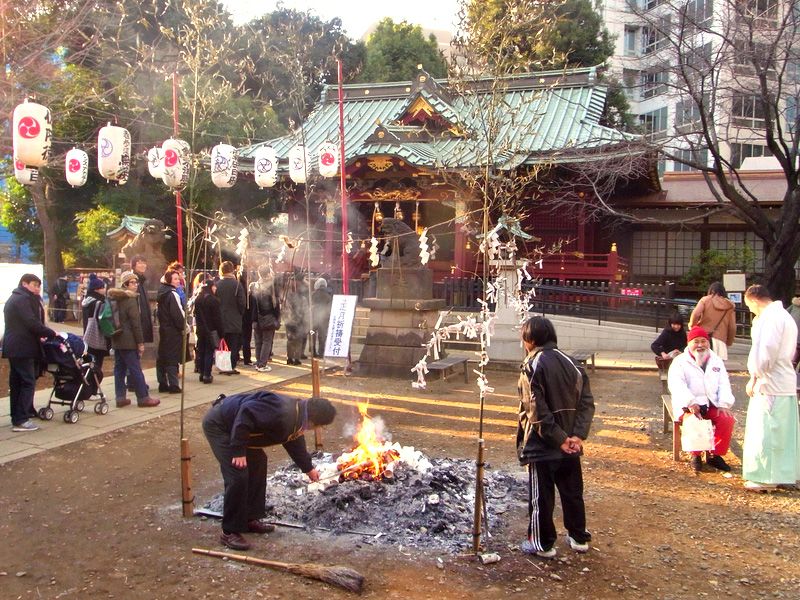 A quieter hatsumōde scene at Konnō Hachimangū in Shibuya, Tokyo. People bring the previous year's good luck charms to burn them in the bonfire.

Although the practices associated with hatsumōde have very ancient origins, in an interesting parallel with Christmas traditions in the West, customs that are clearly recognizable today did not really emerge until the late nineteenth century. In Japan’s case, this means the Meiji era (1868–1912), a period of rapid modernization, technological advancement, and reform that followed the end of feudal rule.

One major change was the date itself. The Gregorian calendar was introduced to Japan in 1873, as part of Meiji era reforms intended to smooth interactions with other nations. Before then, according to various solar calendars used throughout much of Japan’s past, the New Year had fallen anything from three to seven weeks later than it does today.

The earliest origins of hatsumōde can be traced back to the Heian period (794–1185) practice of toshigomori, in which the head of a household would seclude himself in prayer at a shrine from the evening of the year’s last day (ōmisoka) to the morning of ganjitsu, the first day of the New Year. Until the end of the Edo Period (1603–1868) the convention was to visit either the shrine of a family’s patron deity or the nearest shrine or temple reachable from one’s home by tracing the ehō, a compass direction seen as auspicious that varies each year based on astrological calculations. This New Year it will be approximately west-southwest (find your ehō here).

Prior to Meiji reforms aimed at reining in the power and wealth of powerful Buddhist temples, and fostering a sense of patriotism by giving greater prominence to Shintō, Japan’s two main religions had spent centuries developing in close harmony, to the point that little distinction was drawn between them. Even following the ensuing separation, people remained indiscriminate in their choice of shrine or temple when it came to hatsumōde. One more major divergence from earlier traditions, though, was also on the horizon, this time driven—according to some scholars—by industrial progress.

Japan’s first railway rolled into action in October 1872, with services running between Tokyo’s Shinbashi district and the nearby port town of Yokohama. From that point the transport network developed quickly, making it easier than ever before for citizens to traverse significant distances. It was around this same time that people started to leave behind their New Year pilgrimages to local sites and gravitate toward the largest, holiest, most famous shrines and temples. Nowadays, Tokyo’s Meiji Shrine and Sensōji (the temple in Asakusa), Kawasaki Daishi temple, Atsuta Shrine in Nagoya, and other major places of worship across the nation each routinely see millions of visitors in the first few days of each year.

This is where the change of date really comes into play. In antiquity, the new year signaled the arrival of spring and the steady march toward more clement temperatures. But we have those Meiji-era bureaucrats to thank for the calendar reforms that now have us queuing for hours on end in freezing winter temperatures. If you find yourself in Japan and are planning to give hatsumōde a try, be sure to wrap up warmly!

(Banner photo: Crowds paying a traditional New Year’s visit to Tokyo’s Meiji Shrine. This shrine is typically visited by as many as 3 million people in the first three days of January each year.)