Wrap Your Lunch: Reinventing the Humble Rice Ball with “Onigirazu”

The onigiri (rice ball) is one of Japanese cuisine’s oldest traditions. But a new interpretation known as onigirazu is remaking the image of the centuries-old staple snack and garnering an increasing amount of lunchtime attention.

Onigirazu is a hearty dish that is closer to a rice sandwich than a rice ball. It first began to grab attention online at popular cooking sites and with food bloggers in autumn 2014, quickly becoming the focus of recipe contests for professionals and at-home cooks alike.

While similar to onigiri in form—rice and fillings wrapped in nori (seaweed)—onigirazu is distinguished from its culinary cousin in three important aspects: versatility, presentation, and ease of preparation.

No Mess, No Fuss

Making onigirazu is simple: place a large square of nori on a sheet of plastic wrap, spread out a scoop of rice in the middle, add any number of toppings and condiments, top with a second scoop of rice, fold the corners of the nori to the middle, and then firmly bundle in the plastic wrap. After being allowed to set briefly, the package is sliced in half, revealing an appetizing array of fillings.

Unlike the notoriously messy hand-molded method for making rice balls, onigirazu are wrapped— the name is actually a pun playing on the negative form of the verb nigiru, the method for making onigiri, and means “not packed by hand”—liberating chefs from the burden of directly handling hot, sticky rice. The nori wrapping also keeps the dish from falling apart when eating it, a common rice ball woe, and gives diners a barrier to keep hands clean and rice free. This latter point has made onigirazu particularly appealing to parents.

Dish with a Hundred Faces

Another aspect that has fans singing the dish’s praise is its versatility. Onigirazu can be made with either freshly cooked or cold, leftover rice. Since they are tightly wrapped, each can feature a greater variety and quantity of fillings than a normal rice ball. A quick Internet search reveals a wide variation of recipes, with ingredients running the gamut from meat and fish to vegetarian fare. There are onigirazu recipes for people who enjoy a hearty meal as well as those for people watching their waistlines. 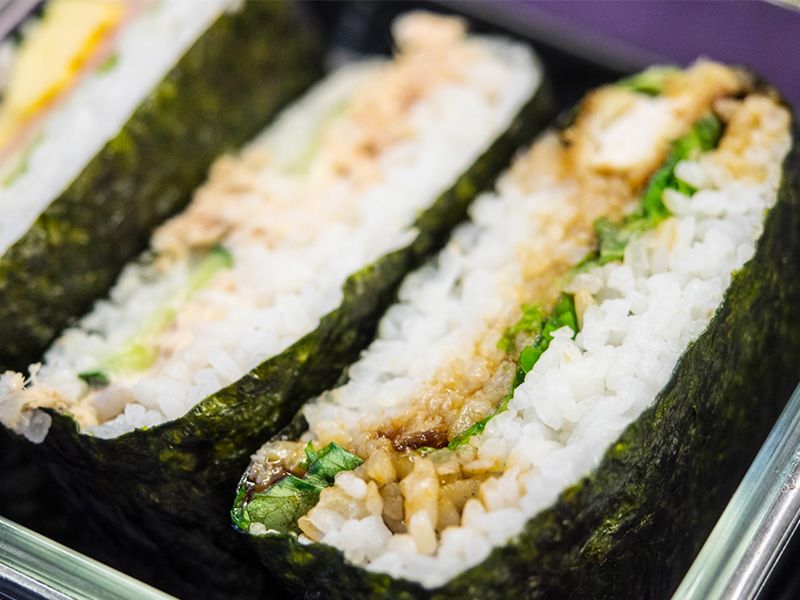 Onigirazu can be easily made using a wide variety of readily available ingredients. (Photo by Laura Tomàs Avellana.)

The ease with which onigirazu can be made has also helped win followers. Whipping up a batch requires no special trip to the supermarket, nor the same effort as creating a cute Japanese bentō. In only a few minutes, leftovers or common refrigerator items can quickly be wrapped into a meal and gobbled up immediately or packed away for later.

Another thing onigirazu has going for it is visual appeal. Fillings can be mixed and matched, allowing chefs to create combinations of colors and textures. When sliced, they present a face similar to a sandwich, with fillings tantalizingly arranged across the full width of the dish.

Many bloggers have lauded onigirazu as an all-around culinary creation, saying it is satisfying, simple, and aesthetically appealing enough to allow bentō makers to “show off” by making it appear as if they have gone to more trouble than they actually have. 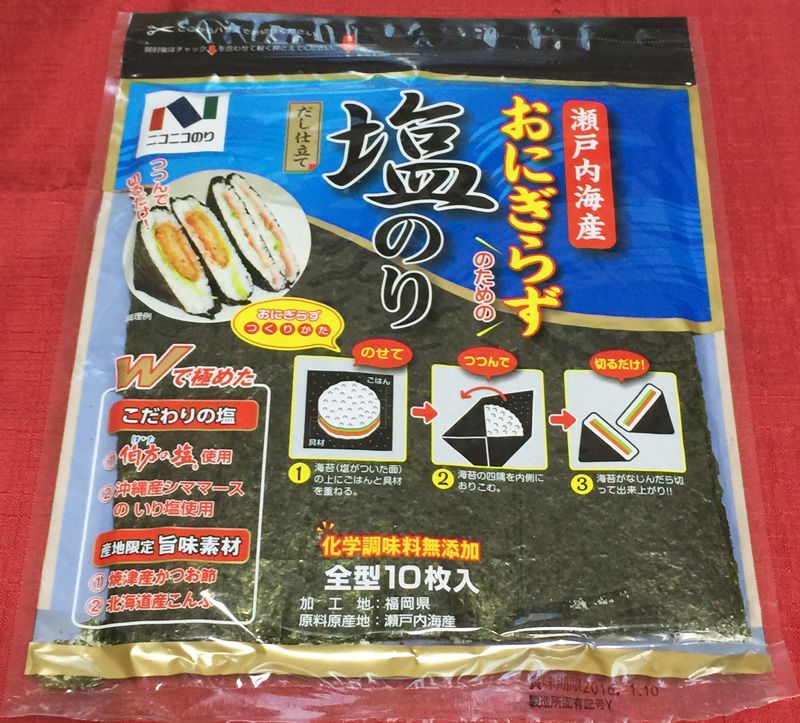 Sheets of nori designed especially for making onigirazu have begun to appear on store shelves.

Despite the recent boom, onigirazu are not a new culinary invention. They first appeared in the popular manga series Cooking Papa by Ueyama Tochi in 1991. Ueyama has expressed surprise that something as simple and delicious as onigirazu has taken so long to catch on, but has been pleased by the scale of Internet attention they have received.

Onigirazu are rapidly moving from an online sensation into the mainstream of culinary culture, with several convenience store chains planning to produce their own unique lines. Some nori manufacturers have also started to join the action, offering squares of seaweed specially designed and flavored for onigirazu.

There is no telling how high onigirazu will climb. Some harbor hopes of it being key in turning the fortunes of Japan’s flagging rice consumption while others see it as the next big Japanese cuisine fad overseas. Whether this proves to be the case or not, as long as people continue creating and sharing recipes, onigirazu will certainly be assured a place on tables and in lunch boxes throughout Japan.