Making It Memorable: Japanese Mnemonics for Dates and Kanji

A Samurai Lends a Hand

Sometimes memory needs a helping hand. While English speakers use “Thirty Days Has September” to remember which are the shorter months, the equivalent for young Japanese children is the phrase nishi muku samurai (the samurai looking west). First of all, ni, shi, mu, and ku sound like the numbers two, four, six, and nine, representing nigatsu (February), shigatsu (April), rokugatsu (June), and kugatsu (September). Then the samurai stands for jūichigatsu (November) because one way of writing it is 士, which looks very much like eleven (十一) with the second character written below the first.

Number wordplay, known as goroawase, is deeply ingrained in everyday life in Japan. Multiple pronunciations for each of the digits zero to nine make it possible to invent memorable phrases. For example, the number two is commonly represented as fu or ni, based on Japanese pronunciation, while tsu (from “two”) is also possible. A little creativity leads to a vast range of useful mnemonics.

Goroawase is particularly useful when it comes to memorizing the years when important historical events took place. This might have a playful connection with the event, as when the Portuguese brought firearms to Japan in 1543: igo yosan ga fueta (budgets increased after that). Here igo yosan represents 1543. Or it might contain a hint of poetry, as with naku yo uguisu (Sing, bush warbler!) used to remember the year 794 (naku yo), when Kyoto (then Heiankyō) became the capital of Japan.

There may be more than one version, as for 1603, the year that Tokugawa Ieyasu established the Edo shogunate. In haiku form, there is bakufu deki / hitomure sawagu / edo no machi (The shogunate is formed / crowds of people raising uproar / in the streets of Edo); the bold middle section is 1603. Or there is the more anticlimactic hīrō ossan (heroic old guy).

One of the most famous of these historical mnemonics was for 1192, the first year of the Kamakura shogunate: ii kuni tsukurō (let’s build a good country). Unfortunately for this particular phrase, textbooks now teach that the shogunate started in 1185. Students have fallen back on ii hako tsukurō (let’s make a good box), which does not quite have the same ring to it.

And then there are kanji. Some ways of remembering kanji, such as that sun (日) and moon (月) combine to make bright (明) are likely to be quite familiar to foreign learners of Japanese. There are mnemonics often seen in the form of riddles too, like the one asking what the yūmei na sakana (有名な魚 = famous fish) is. The answer is maguro (鮪 = tuna), based on the fact that the kanji 鮪 has 有 in its name (名). And there are clever narratives, including the one below.

In 2010, the list of jōyō kanji, which students are required to memorize by the end of high school, was expanded from 1,945 to 2,136 characters. This was due to the fact that the use of computers and smartphones had boosted the number of kanji commonly in use; typing a character is a lot easier than writing it by hand.

The most complicated new entry was 鬱 (utsu), meaning “depression” or “gloom,” with a total of 29 strokes. Perhaps this is why an elaborate mnemonic for the character has been regularly popping up around the Internet over the past few years. 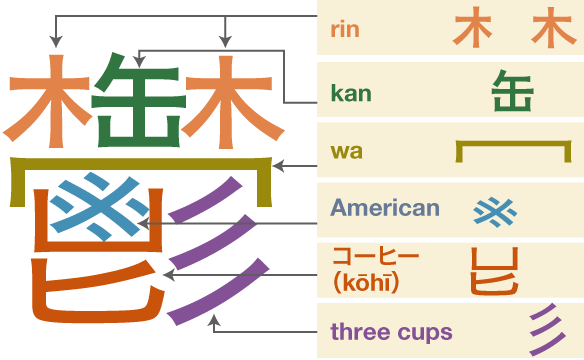 — Rinkān is the character 林 (rin) with the trees separated to fit 缶 (kan) in the center.
— Wa is the kana ワ, which looks like the element 冖.
— Amerikan is 米, the character for “rice” that also means “America” due to its use in the old kanji representation of the country's name, 亜米利加.
— The コ from コーヒー (kōhī) is rotated to become 凵 with the ヒ slotted in below.
— And finally, the three (三) cups are the three lines in the bottom right.

This mnemonic is particularly satisfying in the neatness of its story, not least due to the associations of President Abraham Lincoln with melancholy. And it is remarkably effective. Memorize this little tale and you, too, can impress people with your ability to write the most difficult of the jōyō kanji.