Japan has its fair share of annual observances and festivals, but as a country that loves a good matsuri, it is always open to the idea of importing new ones. A case in point is Halloween. While this spooky autumn festival with European roots once made its mark only in certain pockets of Japan home to concentrated foreign populations, like areas near military bases and expat-heavy neighborhoods in downtown Tokyo, it is now a nationwide event, with Halloween-themed candy and snacks available in every convenience store and costumed parades taking place across the nation.

According to the Japan Anniversary Association, the market for Halloween-related goods and events this year is projected to be ¥122.0 billion in size—more than double the ¥56.0 billion mark hit just four years ago in 2011. This is also an 11% jump from last year, when the Halloween market surpassed the Valentine’s Day juggernaut for the first time ever, helped in part by harsh winter weather that kept consumption down in February 2014. 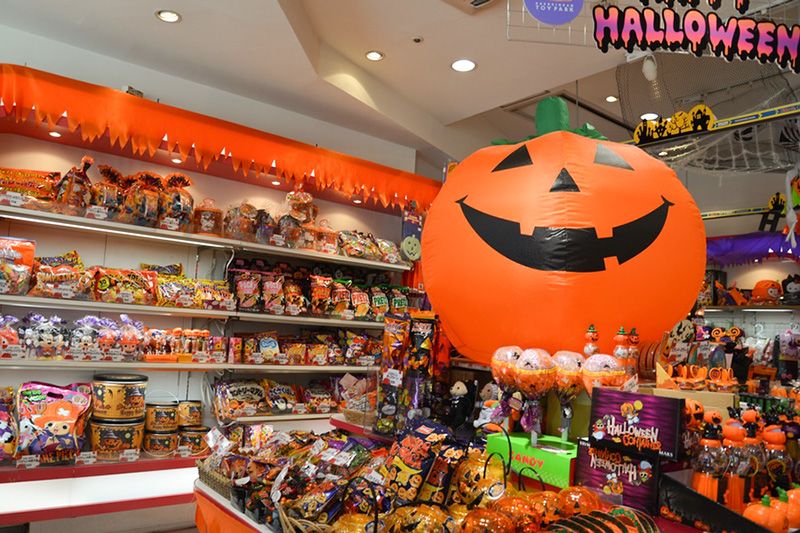 Ginza toy store Hakuhinkan gets into the seasonal spirit in a big way.

Trick-or-treating has not yet become a widespread activity on the evening of October 31. The weeks leading up to the holiday, however, are filled with major events bringing children and adults together to dress up in costumes and get into the Halloween spirit. The city of Chiba in Chiba Prefecture holds a road race for runners willing to take to the streets in costume, while Hirosaki, Aomori, hosts a Halloween-themed apple-harvest festival and Kyoto’s Kitayama neighborhood celebrates with displays of jack-o-lanterns after dark.

The oldest of these events, the Halloween parade in Tokyo’s Omotesandō district, takes place for the thirty-third time this year. Other parades attract thousands of participants to routes in Tokyo’s Roppongi area, Kitakyūshū in Fukuoka Prefecture, and Kawasaki in Kanagawa Prefecture.

This year we attended the Kawasaki parade, which had a Star Wars theme to celebrate the upcoming December release of the seventh film in George Lucas’s popular series. Some Star Wars nebuta floats from the Aomori Nebuta Matsuri held in August were on hand to liven up the proceedings, and around 2,500 costumed participants came to the Kawasaki streets from a galaxy far, far away to show off their cosplay skills. Check out our video below and enjoy one of Japan’s newest matsuri along with them.