Digging into the Past with Burial Mound Cakes

The burial mound cakes of Japanese confectioner Petit Marché have won unexpected popularity for the small company based in Nara, western Japan. Attention to detail has helped the appeal of the cakes to stretch beyond archaeologists with a sweet tooth; Internet and magazine coverage has given them nationwide fame.

Burial mounds, or kofun, can be found through much of Japan. They provide the name for the Kofun period (ca. 300–710), during which most of them were built. Little is known for certain about this time. The early eighth-century texts Kojiki (Record of Ancient Matters) and Nihon shoki (Chronicle of Japan) provide only unreliable legends. For this reason, archaeological excavation of the kofun has played an important role in reconstructing the past.

The kofun cake is in the keyhole shape of mounds for the highest-ranking members of the elite. The largest such mound in Japan, in Sakai, Osaka, is believed to be the final resting place of Emperor Nintoku, thought to have ruled in the early fifth century. 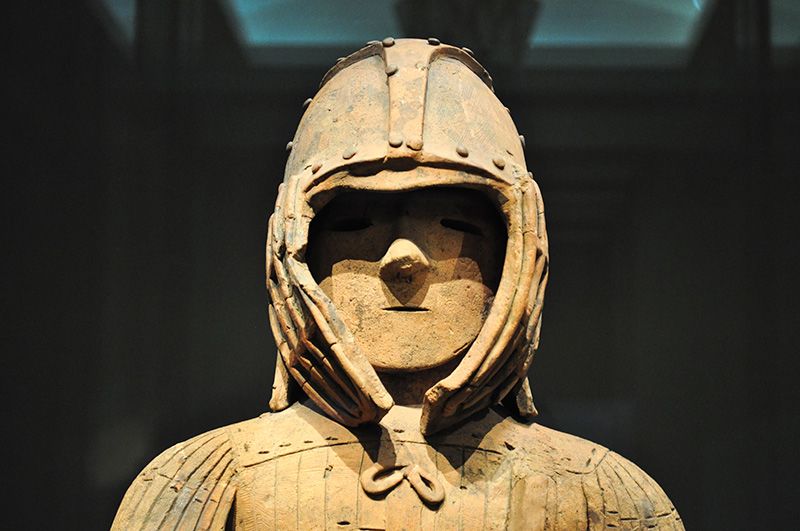 This haniwa soldier in Tokyo National Museum has been designated a national treasure.

To represent grass on its kofun, Petit Marché uses crumbled matcha (green tea) sponge, which is stuck to chocolate cream earth. Around the edges of the cake are cocoa meringue cylinders. These stand for the unglazed clay haniwa that were used to decorate the surfaces of the burial mounds.

The popular image of haniwa today is of blank-faced human figures and animals, especially horses. Some of the best-known examples are on display in the Tokyo National Museum. These are the artistic works that have drawn the greatest interest, but most haniwa were plain cylinders.

Funerary goods, including beads, bronze mirrors, and iron weapons, were placed in the mounds alongside the aristocrats buried there. As the Kofun period progressed, an increasing number of these items were imports from the Korean peninsula. Analysis of the tombs and their artifacts has helped historians to draw an outline of life in Japan during the period, although many mysteries remain.

Comma-shaped magatama beads, a symbol of ancient Japan, have regularly been discovered in burial mounds. The most famous of these beads are the yasakani no magatama, commonly known in English as the “curved jewels,” which along with the sacred sword and mirror make up Japan’s imperial regalia and are symbols of the imperial family’s authority.

Dig into the cake—with the shovel-shaped spoons sold by the confectioner for getting in the mood for excavation—and magatama are among the various treasures inside. At least, there are cashew nuts, which stand in for magatama, and also pecan nut “pottery shards.” In the larger versions of the cake, there are broken cookie “mirrors” and banana slices too.

The haniwa and magatama provide clues about the status of those buried in kofun and the clothes worn and items used in everyday life, but they also raise many questions. Notably, what was their exact significance? Theories, legends, and fiction have tried to fill in the gaps, but they retain their enigmatic qualities. (As, indeed, do the banana slices. Petit Marché provides no explanation on its website of what they are meant to represent.)

Further study of the kofun may reveal more about life in ancient Japan, but the most famous examples have still only received limited specialist attention. Archaeological access to the real-life tombs where emperors are thought to be buried is tightly restricted by the Imperial Household Agency and experts are only allowed to make occasional visits. For those who can make it to the Nara store, though, there are no such constraints on digging into these tasty replicas.