One of Japan’s most famous doctors is a brightly colored train that whizzes around the country’s high-speed rail network. The Shinkansen test train, popularly known as Doctor Yellow, is used to monitor the condition of tracks and overhead wires, helping to preserve the enviable safety record of the high-speed rail service. The vehicle’s nickname derives from its diagnostic function and distinctive yellow appearance.

It is often said that seeing a Doctor Yellow (there are several in service) brings good fortune. The fact that its schedule is not made public has added to this lucky reputation, with unexpected sightings adding color to people’s daily routines. Avid railfans are not content, however, to simply hope for a sudden and miraculous appearance. Instead they share information online to determine the trains’ whereabouts and ensure that they can enjoy a propitious encounter and photo opportunity.

Between Tokyo and Hakata

Japan’s first high-speed rail line—the Tōkaidō Shinkansen connecting Tokyo and Osaka—began operations in October 1964, and yellow T1 test trains were introduced the following January. They received major upgrades in 1974 and 2001. In the first of these, new vehicles combined previously separate checking of wires and tracks. The current sleek models came into use when increasingly rapid passenger services required a corresponding pace from the test trains. 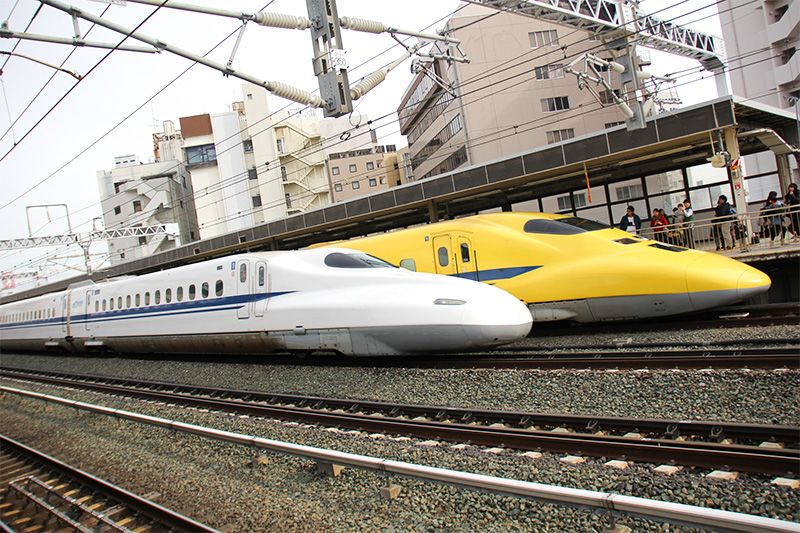 Doctor Yellow and the N700 Shinkansen. (Photo by Aichou/Pixta)

The trains assess safety on Shinkansen lines between Tokyo and Hakata Station in Fukuoka on the island of Kyūshū. There are, in fact, two slightly different models—one for JR Central operating between Tokyo and Shin-Osaka and one for JR West from Shin-Osaka to Hakata. A similar test train called East-i travels on other Shinkansen lines, but it is white with a red stripe and does not, as yet, have the same cult following as Doctor Yellow.

So why is the doctor yellow? As with previous vehicles performing diagnostic functions, the coloring was originally chosen to make the trains more visible at night. An additional benefit is that it makes them easy for travelers to recognize, so they do not try to climb on board. Color aside, the Doctor Yellow trains look much like their passenger Shinkansen counterparts, as well as moving like them, performing their checks at an equally speedy 270 kilometers per hour.

The interior is very different, however, with specialized monitoring equipment in each of the seven cars. There is a basic crew of nine, consisting of two drivers, three technicians responsible for the tracks, and four to oversee power-related issues. The equipment collects data on such aspects as wear in overhead wiring and whether the tracks have moved out of their correct alignment. The crew then analyzes the data, so repairs can be made as necessary. 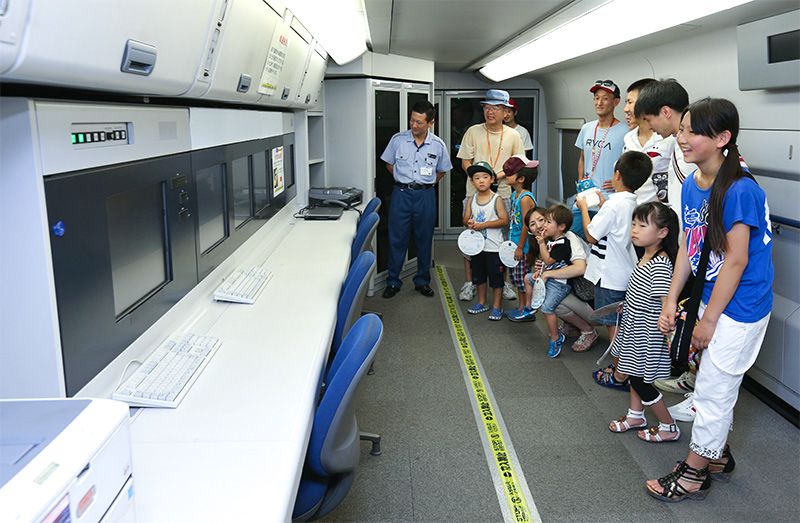 Visitors get a chance to look inside Doctor Yellow at a JR Central facility in Hamamatsu, Shizuoka Prefecture, on July 26, 2014. (© Jiji)

Doctor Yellow’s windows are blocked out, so it is not usually possible to see any of the equipment. There are, however, occasional opportunities to take tours inside. On March 13 this year, JR West opened up a test train to 400 participants in Hakata. JR Central holds similar events. Many applicants vie to win places on the tours. If it is lucky to see Doctor Yellow from the outside, it must be even more so to view the interior.

For those who cannot get up close, however, there is always the option of buying some of the many Doctor Yellow goods on sale. These include bentō boxes, backpacks, USB memory sticks, watches, and sneakers in the shape of the iconic test train, as well as socks, T-shirts, and other items adorned with its design. Tie-ups with popular characters like Hello Kitty and Rilakkuma are also common. Naturally, there are train sets too. 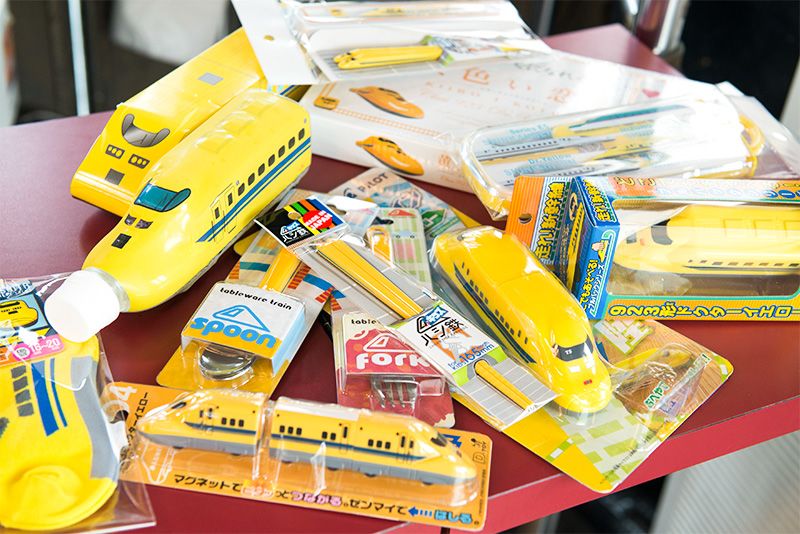