“Fall down seven times, stand up eight” has become a popular inspirational quote in English, extolling the virtues of perseverance in the face of repeated setbacks. An online search for related images will find countless motivational posters as well as a few tattoos. It is a translation of 七転八起 (shichiten hakki),(*1) one example of a yojijukugo, or four-character idiomatic compound.

As the name indicates, these vocabulary items consist of four kanji strung together. They appear mainly in written Japanese, holding the reader’s interest by pepping up prose, while conveying a disproportionate weight of meaning in just a handful of characters. Like English proverbs, many are obscure or literary, but some are extremely well known. They are first studied in elementary school, and the most common phrases are referenced regularly in popular culture. 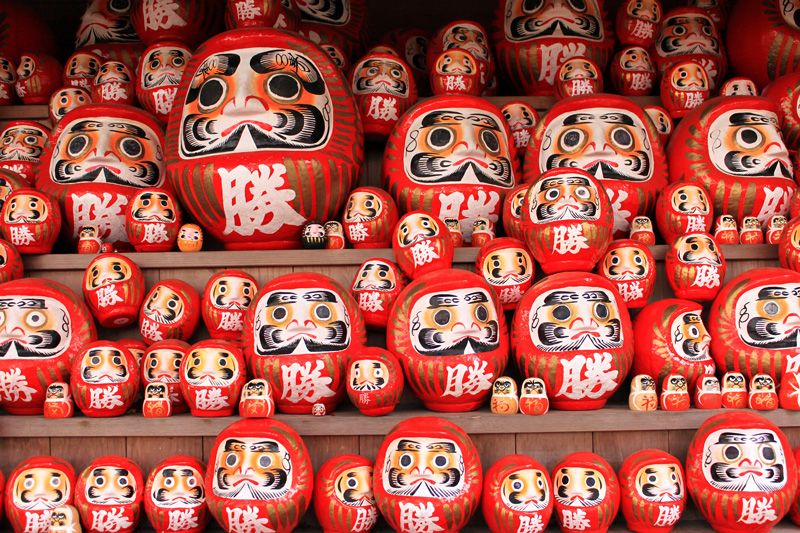 Daruma dolls are commonly associated with the phrase “fall down seven times, stand up eight,” because they are weighted at the bottom so they spring back up after being pushed over.

As well as those deriving from everyday Japanese, some yojijukugo have their origins in Chinese stories. The phrase 呉越同舟 (Go-Etsu dōshū) refers to enemies being in “the same boat.” In describing an unlikely alliance, it is a little different than the superficially similar English “same boat” expression. It goes back to an episode described by Sun Tzu in which enemies from the ancient Chinese states of Wu and Yue (Go and Etsu in Japanese) helped each other during a storm at sea.

A number of phrases come from Buddhism. For example, 諸行無常 (shogyō mujō), whose four kanji roughly mean “various,” “things,” “not,” and “permanent,” respectively, translates overall as “everything is transient.” Another yojijukugo originally from Buddhism, 言語道断 (gongo dōdan), has acquired a different meaning over the years. It originally described how profound truths cannot be put into words but is now typically used to mean “unspeakable” in the sense of “outrageous” or “preposterous.”

One particularly well-known phrase borrows from English. “To kill two birds with one stone” has entered Japanese as 一石二鳥 (isseki nichō). As its component kanji—meaning “one,” “stone,” “two,” and “bird”—are included in the 240 characters learned in the first two grades of elementary school, this is among the easiest yojijukugo to remember, especially for English-speaking learners.

The aesthetic pleasures of four-character phrases, as compared with other proverbs, lie in their exquisite balance. They can be broken down into two pairs of characters, which often apply repetition and contrast to create a heightened effect. The phrase 一喜一憂 (ikki ichiyū) expresses the emotional turbulence of reacting to a changing situation: “one joy” is followed by “one sorrow” and vice versa. Similarly, the phrase 一進一退 (isshin ittai) conveys a stalemate: “one step forward” and “one step back.”

Many other yojijukugo are based on numbers. 再三再四 (saisan saishi)—or “again,” “three,” “again,” “four”—means “again and again.” 十人十色 (jūnin toiro)—“ten,” “people,” “ten,” “colors”—is a way of saying that people’s opinions and tastes vary. There is also a less inspirational variation on “fall down seven times, stand up eight.” From only looking at the individual kanji 七転八倒 (shichiten battō) could be translated as “fall down seven times, fall down eight,” although the actual meaning is to “writhe in pain.”

Food on the Brain?

Most commonly, yojijukugo are defined as being nonliteral or idiomatic, as in the examples given above. According to one school of thought, however, they can refer to any four-character phrase, no matter how mundane. In this broad interpretation, 立入禁止 (tachiiri kinshi), meaning “no entry,” and 高速道路 (kōsoku dōro) or “expressway” would also count as yojijukugo.

A popular anecdote illustrates the difference between the two definitions. One day, a teacher asks the class to complete the yojijukugo __肉__食, expecting the answer 弱肉強食 (jakuniku kyōshoku). This lines up kanji meaning “weak,” and “meat” alongside “strong,” and “eat” to mean “the law of the jungle.”(*2) But one student gives the response 焼肉定食 (yakiniku teishoku), which simply means a yakiniku set meal.

While one might argue that the student is technically correct, the humor rests on the confounding of the teacher’s expectations. Yojijukugo are thought of as idioms first and foremost. There are countless more for language lovers to seek out with entire dictionaries containing a rich variety of phrases. Perhaps only a small fraction are essential to remember, but for those who enjoy the beauty of language for its own sake, the compressed poetry of yojijukugo is prime terrain for exploration.

(*2) ^ As an aside, a character in the novel Cloud Atlas uses the phrase “The weak are meat the strong do eat.” Author David Mitchell, who lived in Japan for several years and has a Japanese wife, was presumably inspired here by 弱肉強食.