Leave the Bottle Behind! Raising a Cup to Japan’s Single-Serving Sake

Lifestyle Food and Drink Culture Nov 2, 2018
Japan’s single-serve cup sake is the best way to casually enjoy nihonshu. There are hundreds of brands to explore, from mass-market options like One Cup Ōzeki to highly sought-after local labels, with more appearing all the time.

A person can happily spend hours and a small fortune getting familiar with the intricacies of sake. But a frugal and less fastidious-minded nihonshu lover will want to forego the large, pricy bottles from Japan’s top labels and instead reach for single-serve cup sake. Although often characterized as a cheap tipple of boozing older men, cup sake is a diverse category that spans everything from mass-market varieties to small-batch, premium grades.

Typically bottled in wide-mouth, 180-milliliter glass containers capped with aluminum pull-top lids, it is unpretentious, portable, and tasty. Pleasantly affordable at around ¥200 to ¥300 a piece, cup sake can be enjoyed casually without digging deep into your pockets. 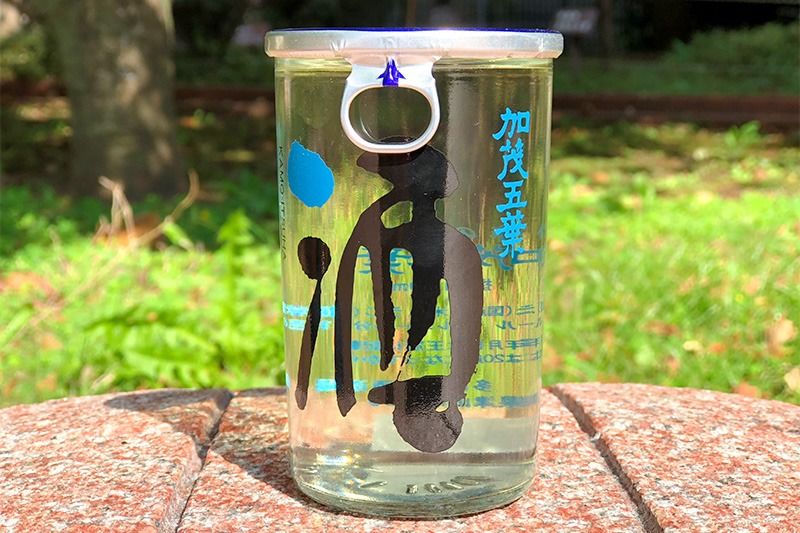 King of the Cup

The brand that started the cup sake ball rolling is One Cup Ōzeki. Launched in 1964 by the Hyōgo-based brewer Ōzeki, it offered consumers a whole new way to enjoy the national drink. Sake had for decades steadily lost ground to the likes of beer and whisky, in part because of its traditional image. Although Japan’s postwar economic boom was rapidly transforming society, sake was still served in nondescript porcelain flasks and slurped from tiny earthenware cups. With eyes firmly on their bottom line, an Ōzeki executive set out to change nihonshu into an exciting beverage to be enjoyed on the go.

Taking a hint from pub-going businessmen guzzling inexpensive sake from medium-sized cups, Ōzeki’s tenth-generation president Osabe Bunjirō struck on the idea selling individual portions. By bottling sake in 1-gō quantities, a standard serving equal to 180 milliliters, people could enjoy their beverage straight from the container whenever and wherever they wanted. 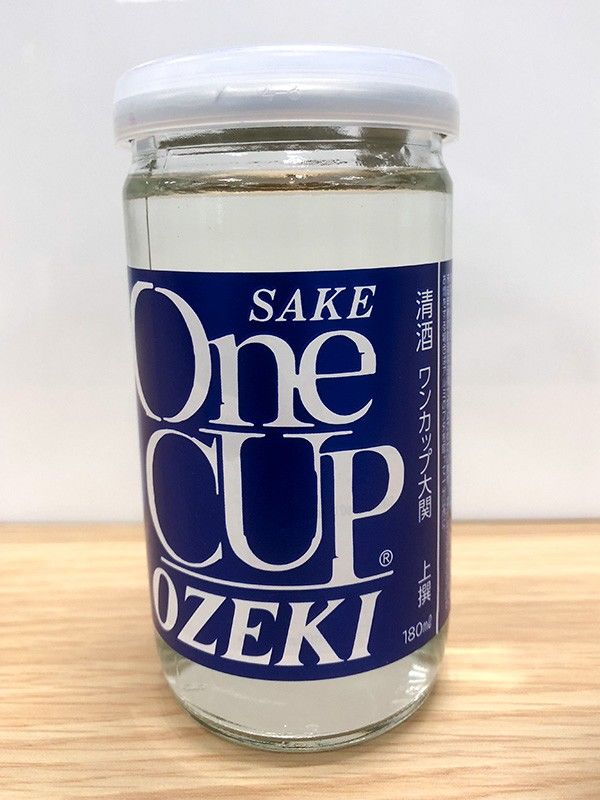 The cup that started it all, One Cup Ōzeki (Hyōgo).

Ōzeki enlisted the creative talents of leading designers of the day to come up with the brand’s wide-mouth container and iconic blue and white label. The brewer was just as fastidious about what went into the cups, insisting on top-grade sake while endeavoring to keep the debut price to an affordable ¥85 to appeal to young consumers.

Tapping into the buzz around the 1964 Tokyo Olympics—the product launched on the same day as the opening ceremony of the Games—One Cup Ōzeki sold 690,000 units in its first year on the market. After remedying leaking issues with the metal pull cap and ramping up its marketing machine, Ōzeki boosted sales to 3.3 million units by 1970 and then to over 100 million by 1979. Although sales peaked in the mid-1990s, One Cup Ōzeki today remains comfortably ahead of the pack. Its lineup of some 30 varieties are widely available on store shelves and account for 40% of the cup sake market.

Naturally, success breeds competition. Not long after One Cup Ōzeki sales took off, brewers large and small threw their hats into the cup sake ring. More than a half-century on, cup sake has blossomed into a robust category of nihonshu. Ōzeki has been joined by other domestic brands, but the real excitement is the growing throng of regional jizake labels. 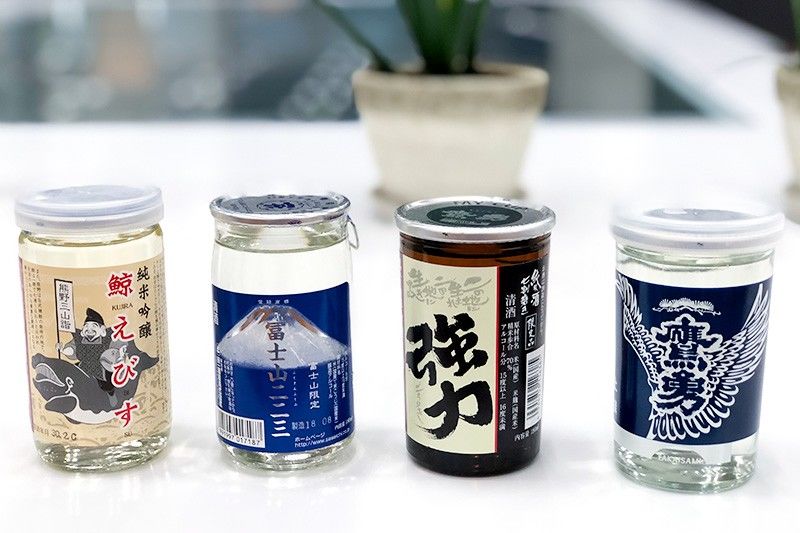 The small size and affordable price of cup sake make it a great way for local distilleries to get people to try their wares, although getting started can be a daunting task—an entirely new size of label must be prepared, not to mention that much of the bottling work has to be done by hand. Lending a helping hand are distributors like Ajinomachidaya. Located in Nakano, Tokyo, the shop has long been a believer in the potential of cup sake and doles out advice to breweries on issues like branding, bottling, and pricing. Ajinomachidaya carries over 70 cup sake labels, many of them exclusively, and staff say they have seen a steady uptick in sales, particularly among women who enjoy the casual nature of the drink.

A large part of cup sake’s appeal is its versatility. It can be enjoyed chilled, warmed, or at room temperature. There is growing interest in cup versions of premium-grade sake, but this can drive up price—according to Ajinomachidaya, ¥380 is the upper limit people are willing to pay. Generally, customers are not attracted as much by the grade of sake as by the design on the label. This has produced an array of inventive packaging that ranges from traditional designs to humorous doodles. Cute promotional mascots known as yuru kyara also frequently grace the cups, as do popular anime characters and illustrations by well-known artists. 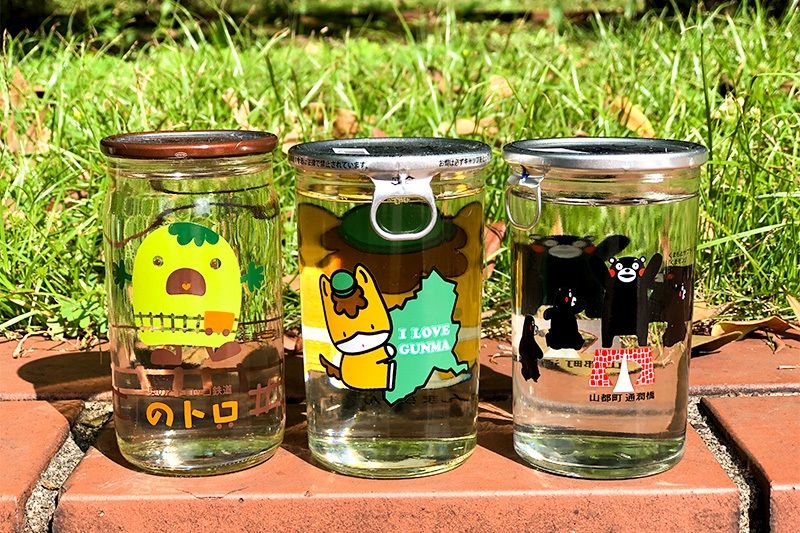 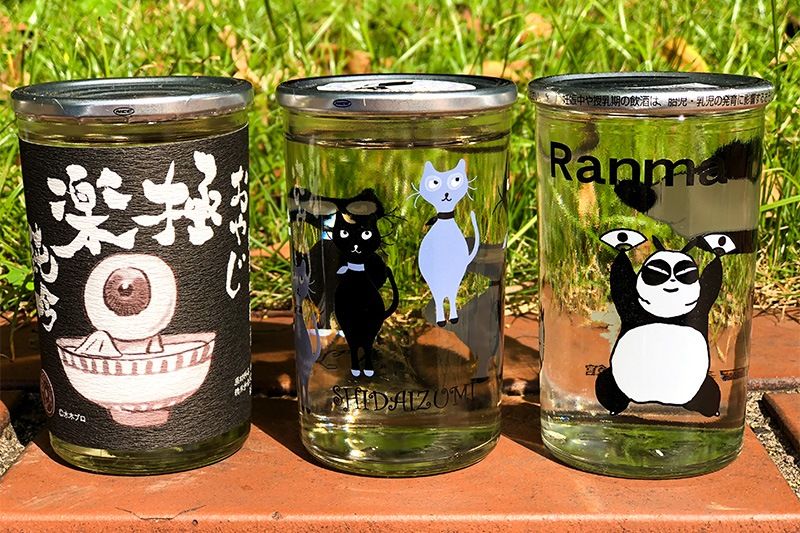 The Internet is a good place to go cup-sake shopping, but for drinkers who prefer brick and mortar, retailers like specialty supermarkets, department stores, and liquor shops generally carry a diverse selection of brands. Traveling offers a great opportunity to enjoy cup sake, so when on the road in Japan be certain to check local stores or souvenir shops. Limited express trains and the high-speed Shinkansen that have food cart service also are a good place to find—and consume—local varieties.

For people who enjoy spending an evening out, pubs specializing in jizake often carry a selection of cup sake labels. Two shops in Tokyo with an impressive assortment of cup sake from around Japan are Buri in Ebisu and Tententen in Shinjuku.

Cup sake is a laid-back way to enjoy nihonshu. There is something for everyone, so start exploring the growing number of labels on offer. 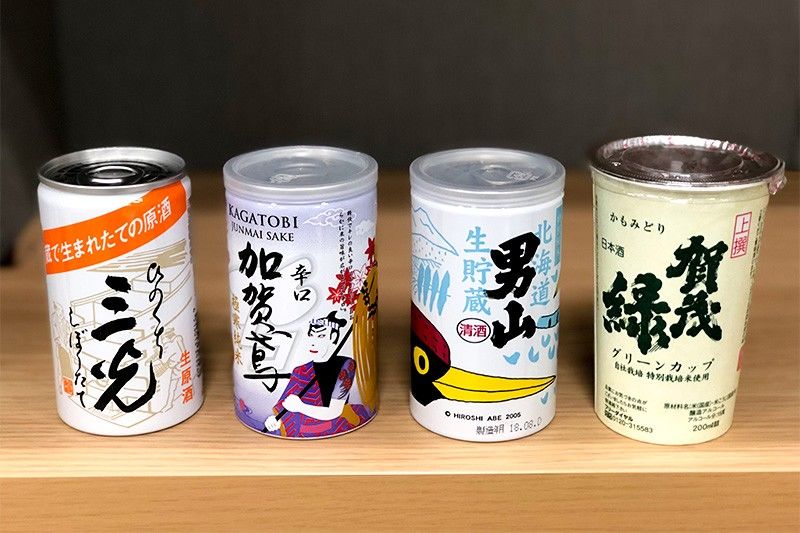 Cup sake comes in a variety of containers other than glass. From left, Sankō (Okayama), Kagatobi (Ishikawa), Otokoyama (Hokkaidō), and Kamonomidori (Okayama). 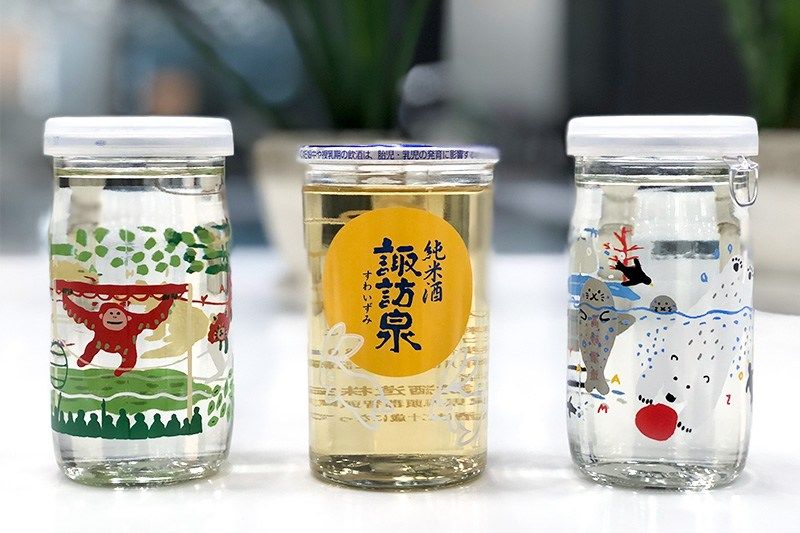 Cute designs, such as these featuring animals from Hokkaidō’s Asahiyama Zoo (on the left and right) and the moon-and-rabbit cup by Tottori’s Suwaizumi (center), can make it hard to throw cups away when empty. 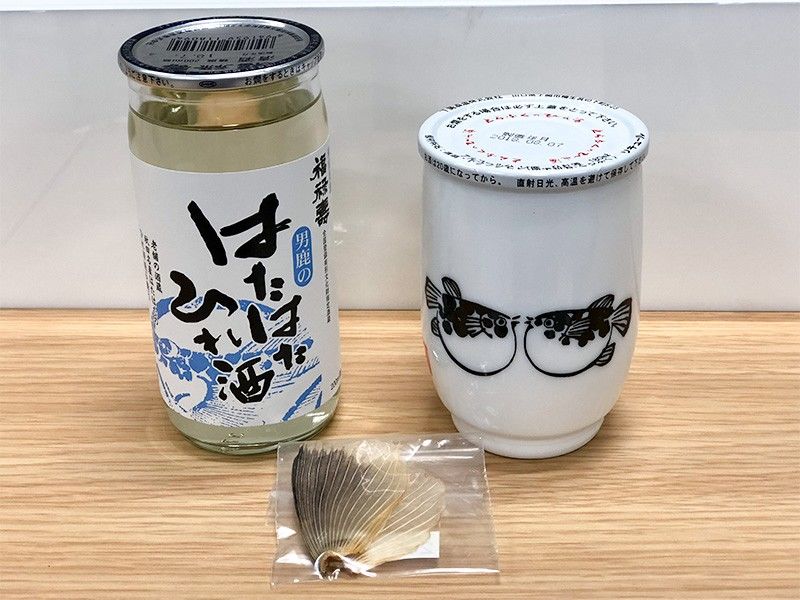 Fancy hirezake cups containing fins of hatahata (left, from Akita) and blowfish (Yamaguchi) are consumed warm, with the fish bit in the drink to add flavor. 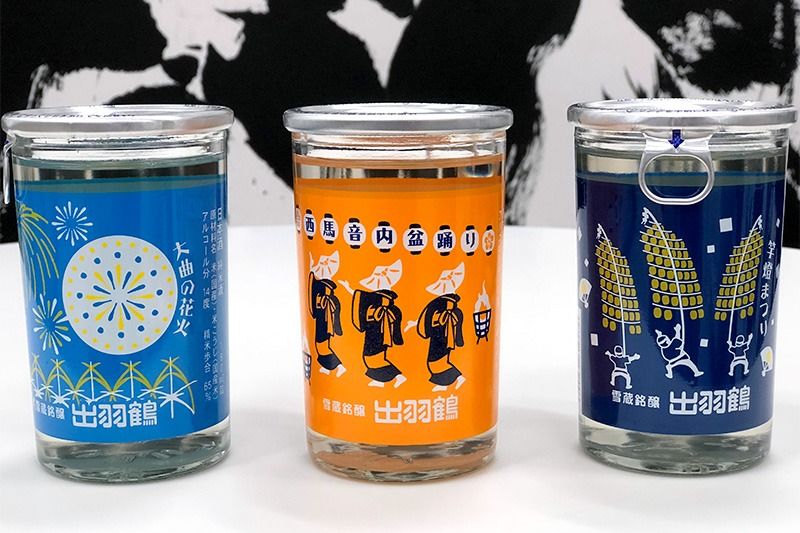 A collector series by Akita distillery Dewatsuru emblazoned with images of famous festivals from the prefecture: from left, the Ōmagari fireworks, Nishimonai Bon dancing, and the Akita Kantō Matsuri. 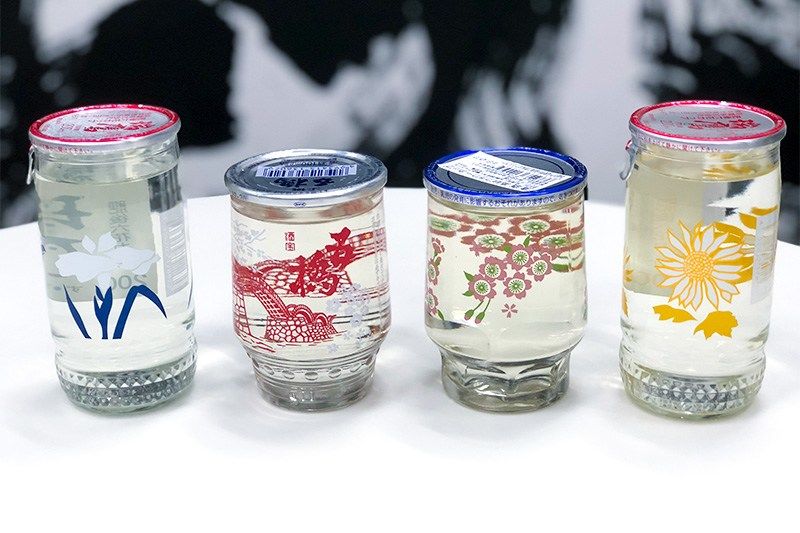