Culture Lifestyle Feb 4, 2013
Ikebana flower arranging has a history stretching back over 500 years. One world-renowned practioner of the art today is Kariyazaki Shōgo, who brings his own unique style to this traditional art. In this interview, we discuss his recent projects and the aesthetics of flowering arranging. 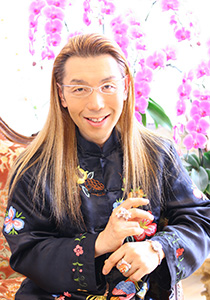 Floral artist. Head of Kariyazaki Shōgo’s Flower and Bouquet Classroom. Served as public relations ambassador for France on the 150th anniversary of French-Japanese relations and “tulip ambassador” for the Netherlands, in addition to handling the flower arrangement for the Shanghai Expo and the Rome Film Festival. His flower arrangements have been exhibited at venues that include the Petit Palais and the Bois de Vincennes in Paris. Recently launched a line of kimono designs. Has also begun a series of exhibitions that displays flowers in historical buildings, including an exhibition in Mima, Tokushima Prefecture that runs until February 20, 2013. Kariyazaki makes frequent television appearances and is often covered by the print media.

The Importance of Self-Promotion

INTERVIEWER  Your unique creations displayed in Japan and abroad are a different take on the traditional Japanese flower arranging, ikebana. How would you describe your style?

KARIYAZAKI SHŌGO  The foundation for my style is the traditional ikebana, but I try to add original, modern elements as well. I use flowers to try and express something that is unique to me and my personality. Many Japanese individuals find it hard to sell themselves as individuals in that way; whereas outside Japan people are more adept at promoting themselves. 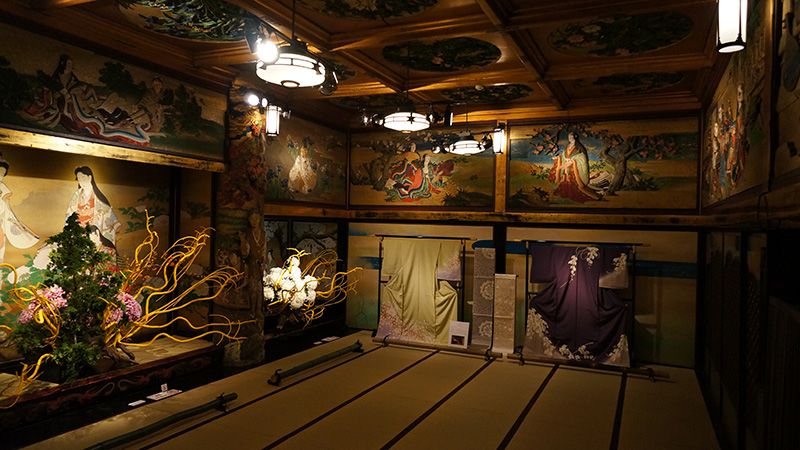 The “Kariyazaki Shōgo’s World—A Flower Renaissance“ exhibition of flower arranging was open to the public at Meguro Gajoen in Tokyo’s Meguro Ward until November 18, 2012.

INTERVIEWER  In the case of traditional Japanese flower arranging, flowers are cut and displayed in a very simple way. How do people outside Japan react to that approach?

KARIYAZAKI  People overseas often say that ikebana is the ultimate in minimalism because a single flower on a single stem is all it takes. The art is in harmony with the sort of nebulous, indeterminate beauty often found in Japanese spaces, such as the soft light that streams through a paper-screened door. Placing a beautiful lone flower against that sort of backdrop allows for a clear appreciation of its beauty. This Japanese aesthetic has been passed down from generation to generation.

For ikebana, each flower is trimmed to the point beyond which nothing else should be taken away. This is quite different from the flower arranging seen in other countries, where the approach is to add more and more layers of flowers. When people from such countries see ikebana, I think it often strikes them as a fresh, new approach.

A Tool for Communication

INTERVIEWER  You are playing an important role in promoting Japan around the world. What are your thoughts and feelings on how flower arranging can be used to enhance cross-cultural understanding?

KARIYAZAKI  Around the world you can see how important flowers are to people’s lives. There are so many uses for flowers, whether it be for decorating a house or to give someone as a present. I really think that Japan lags behind in this respect—just as there are many other areas where Japan has room for improvement. However, there are so many people abroad who find Japanese culture interesting and I do my best to convey to them what I know.

I also think it’s extremely important for me to use flowers as a vehicle for communicating with other people. Of course, you can understand a lot by just looking at flowers, but I find that adding some explanation enhances their understanding and brings us closer together. Since Japan is an island country, it tends to be rather isolated. So I hope that communicating through the use of flowers will be a way to bring Japanese closer to people in other countries.

Flower arrangements created by Kariyazaki for an exhibition held in Paris in the summer of 2012.

INTERVIEWER  When presenting your creations to the public do you find differences between how they are received in Europe compared to Asia?

KARIYAZAKI  I think there are big differences; particularly when it comes to use of color. In Asia, yellows and reds are very popular. These colors are associated with good fortune so when I use them, people are always delighted. In the Europe, when I use elegant colors, like an exquisite pink or purple, I often get a wonderful reaction, with people telling me how much they like the subtlety and profundity of the flowers.

INTERVIEWER  Your business related to flower arranging has been very successful. How do you feel about this side of things?

KARIYAZAKI  I think there is still a lot of room for improvement, but my basic hope is that my customers will enjoy the events I organize. It’s important to have the notion of people paying their own money for such cultural events—just as in the case of museums, concerts, movies, or restaurants. People say that the economy is in bad shape these days but crying about it won’t solve anything. If we can find a framework in which people use their pocket money in exchange for the beautiful things in life, it will reinvigorate Japan’s economy. It’s something that everyone has to get involved in, and I’d like to do what I can to offer people something worthwhile.

(Translated from an interview in Japanese by Harano Jōji, representative director of the Nippon Communications Foundation.)