Culture Apr 28, 2015
The manga Kiseijū depicted a battle with creatures that invade the brains of human hosts. Twenty years after its serialization came to an end, it has now been made into a two-part film, Parasyte, by visual effects wizard Yamazaki Takashi. One of the Japanese movie world's most successful directors discusses the manga's world view and appeal that became vital elements of his adaptation. 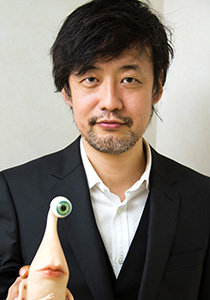 Born in 1964. Became inspired to seek a career in special effects after watching Close Encounters of the Third Kind and Star Wars. Graduated from Asagaya College of Art and Design before joining visual effects company Shirogumi in 1986. Handled digital compositing and special effects for director Itami Jūzō's Daibyōnin (The Last Dance) (1993) and Shizukana seikatsu (A Quiet Life) (1995). Made his directorial debut in 2000 with Jubunairu (Juvenile), and went on to helm works including Always Sanchōme no yūhi (Always Sunset on Third Street) (2005), Space Battleship Yamato (2010), and Eien no zero (The Eternal Zero) (2013), which won seven categories at the 2015 Japan Academy Prize ceremony. Stand By Me Doraemon (2014), also directed by Yamazaki, was named Best Animated Film in the same award ceremony.

A Legendary Manga that Nearly Became a Hollywood Movie

Ask movie lovers to name a film in which the human body is invaded by a being from outer space, and most likely they will mention Invasion of the Body Snatchers, based on American science fiction author Jack Finney's novel The Body Snatchers, which has been adapted several times by Hollywood. The eeriness of family and friends secretly ceasing to be human seems to be an attractive concept for filmmakers. Another example is the manga Kiseijū, about a battle between mankind and parasitic beings that take control of people's brains. Although the property's film rights were initially snapped up by a US studio, an American adaptation never came to fruition.

Iwaaki Hitoshi's popular comic was serialized in a weekly manga magazine from 1989 to 1995, and over 15 million copies of its collected editions have sold to date. When the US studio’s rights eventually expired and returned to Japanese hands, the task of bringing the manga to the big screen was given to director Yamazaki Takashi, one of Japan's top visual effects creators and a highly successful filmmaker in his own right. He adapted it into a two-part movie. The first installment, Parasyte: Part 1, was released in Japan in November of 2014 and became a massive hit with over 1.5 million admissions. The concluding chapter, Parasyte: Part 2, hit theaters on April 25.

An Influence on Terminator 2?

“At the time the manga was in serialization, I'd already begun working in visual effects,” recalls Yamazaki. “I knew for sure that somebody would make it into a movie, so in the hope they'd let me come on board, I even went as far as making a demo film for it, taking footage of my own face which I digitally crushed and returned to normal. In the end though, nobody said they'd do it.”

Back in those days, a rumor had spread through film industry circles that James Cameron was aware of the manga, and had bought its film adaptation rights in order to make Terminator 2: Judgment Day. “It was something like an urban legend. Even so, the T-1000 [the terminator with a liquid metal body in T2] did seem to move as if it was inspired by Parasyte. I think it must have been an influence.”

When Yamazaki actually began shooting his Parasyte films, he contemplated why Hollywood was never able to make a film of the manga. “I think it might have had something to do with the fact that it doesn't make clear distinctions between good and evil. If you think about the story from a Christian-influenced perspective, something doesn't seem right about it. In a polytheistic country like Japan, we can think of the parasites as 'gods' that are higher lifeforms than humans. Having characters that aren't clearly good or evil, or showing that both sides exist within all of us, might not have gone down well with viewers in the United States.” 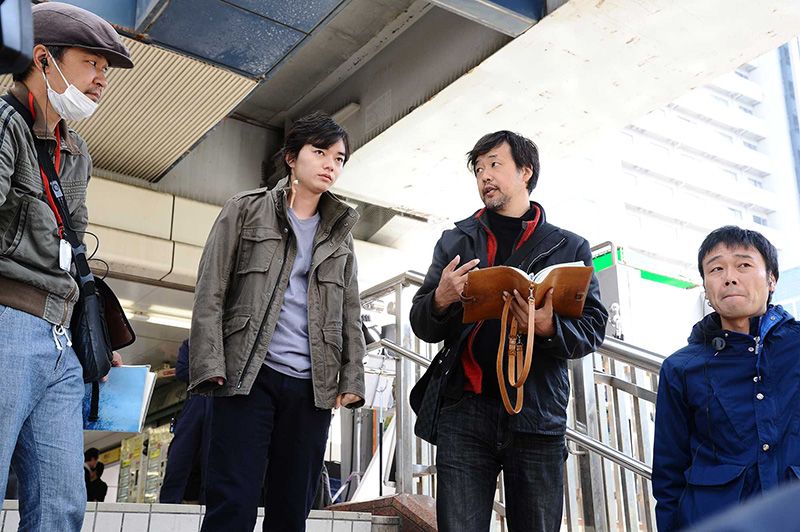 The protagonist of Parasyte is an average high school student named Izumi Shin'ichi. One day, a strange organism invades his body and assimilates itself into his right hand. He is forced to live in symbiosis with this parasite that adopts the name “Righty,” and eventually a strange kind of friendship grows between them. The two of them face off against other parasites that prey on and mimic humans, in a battle for the survival of their respective species.

Yamazaki sees this central character's nature as being quintessentially Japanese. “He exists somewhere between two species, and this kind of hero is extremely particular to Japan. The same goes for Kamen Rider, Ultraman, or Devilman . . . At first glance, you might get the impression that this film is in the same vein as Hollywood's alien invasion and 'possession' movies. As I was making it, though, I came to realize that Parasyte has a uniquely Japanese perspective.”

Tech to Make the Parasites Possible

There have been great strides in visual effects technology since the time over 20 years ago when Yamazaki first wanted to be involved in a movie adaptation of the comic. However, the Japanese film industry can be slow to react. “It's a conservative world, and the latest technology takes a long time to reach the hands of filmmakers. In other words, no one's able to judge which projects are worth investing money in. But I can tell. I knew we had to use motion capture in order to put 100 percent of Abe [actor Abe Sadao] into the character of Righty.”

Video game makers Konami and Square Enix provided assistance for scenes in the movie where parasite-infested characters “split” their faces in order to consume their human prey. They also helped with motion capture, a technique in which actors' movements and facial expressions are read by computers for use in digital visual effects.

“Video game makers have the latest and best technology. However, hardly any film directors know what's going on in the video game industry. I knocked on the doors of people who have nothing to do with movies, and asked them to let me use that technology for the benefit of a Japanese movie. It wasn't easy to pull off, but the results were worth it.”

In Hollywood, the best ways of making a film are selected through ongoing trial and error. Repeating this process fosters technological improvement. On the other hand, filmmakers take a different approach in Japan. “We have budgetary issues and other limitations, so the only way forward is to try to figure out in advance which technology will be the most useful. That takes courage, and it can't be done if you don't keep your finger on the IT pulse.”

Nevertheless, technological development was not the only reason that Yamazaki felt the time was right to make films based on Iwaaki's work in Japan. “The things the manga warned us about are occurring in real life. I felt it would be possible to convey a message by turning it into a movie today.” 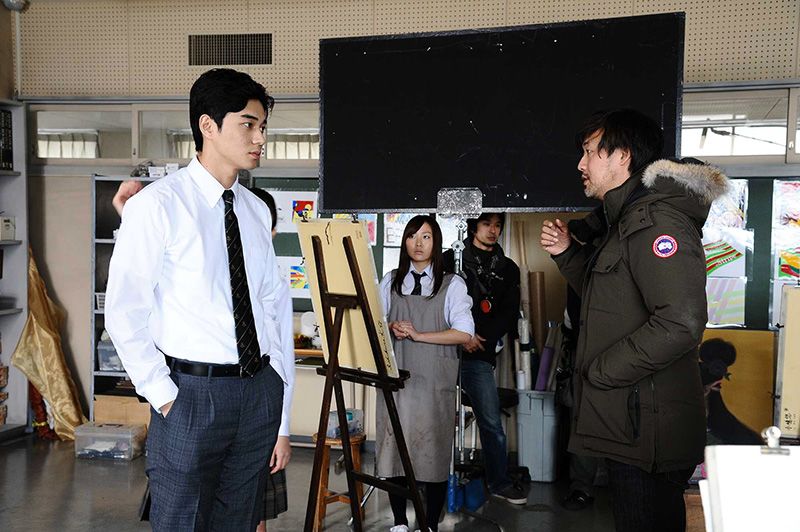 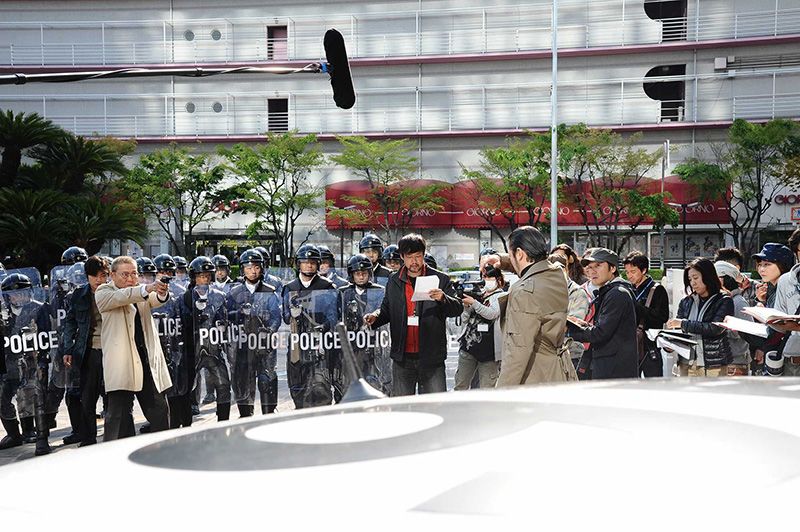 When the manga was still being serialized, it drew attention for its warnings regarding global environmental crises. However, we face dangers today that threaten our very existence. “Now that our situation has become even more urgent, I'm struck again by how impressive its inherent message is.”

“We live in fear in the midst of an extremely unstable situation, not knowing when another major earthquake will strike, or how much radiation is really out there. It's my belief that this story should be told exactly because of that situation. I felt it was important to get its message across not in a political way, but through entertainment, in my position as a citizen living in Japan today.”

Parasyte will be screened on May 1 at Italy's Udine Far East Film Festival. “I'm sure viewers overseas will sense from it the dark shadow that has fallen over Japan following the events of March 11, 2011 [the Great East Japan Earthquake and tsunami], and I hope that they will relate to the idea that we must go on living, no matter how grave our sins are.”

The Dangers of an Excessive Foreign Focus 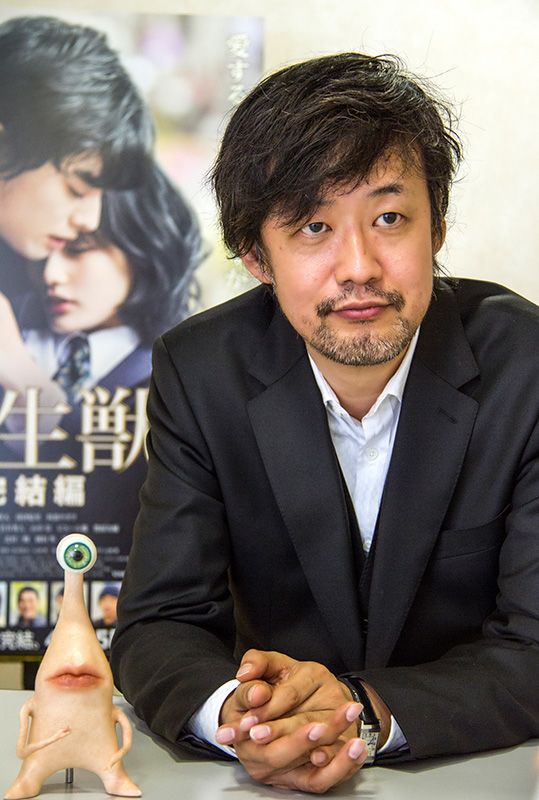 Yamazaki notes his fondness for 3D CG animation, also used in his hit Stand By Me Doraemon, co-directed with Yagi Ryūichi, which grossed over ¥10 billion internationally.

Beginning with the hugely successful Always Sunset on Third Street series that recreated Shōwa-era Tokyo, Yamazaki has utilized visual effects to bring different genres to life with each new film, including space opera, samurai drama, World War II, and CG animation, resulting in hit after hit. He is one of Japan's foremost directors of cinematic entertainment, but maintains a dispassionate view of the place of Japanese films in the international marketplace.

“I'm not particularly interested in cultivating content to appeal to viewers overseas. Placing too much emphasis on the foreign market can weaken your foundations. We're Asian, the English language is not at the base of our culture, and we have many disadvantages. When it comes to live-action films, as long as our lead characters are played by Asian actors, it's impossible for us to compete on the same level as Hollywood blockbusters. That being said, there are genres in which we can be competitive. I only have so much time, so I want to have as many aces up my sleeve as possible. For example, with 3D animation, there's a receptive audience for Japanese films in a number of countries.

“Essentially, the international market is not my final objective. For me right now, what's important is to figure out how to compete in the Japanese market, which is said to follow different rules to the rest of the world. If I make something that by chance has the potential to be successful internationally, then I'll pursue that possibility eagerly. Even so, that will only ever be secondary. It's a bonus.”

With his visual effects background, Yamazaki has employed various technologies in a wide variety of films, but tackling the latest technology is not a priority when it comes time to shoot a movie.

“I receive all kinds of offers, but the ones I accepted all have something in common, which is that they made me feel excited about shooting them. Technology is something you use when you need it. You can do just about anything with CG now, so it doesn't surprise audiences anymore. The most important thing is to first have a story, and characters within it that are interesting.”

(Based on an April 2015 interview by staff editor Itakura Kimie and originally published in Japanese on April 24, 2015.)