Culture Dec 11, 2015
Japanese-born American director Cellin Gluck brings a unique set of multicultural experiences and memories to his new motion picture Persona Non Grata, depicting Japanese diplomat Sugihara Chiune and his efforts to save Polish and Lithuanian Jews from the Nazis during World War II. In an exclusive interview, we explore the roots of Gluck’s latest work. 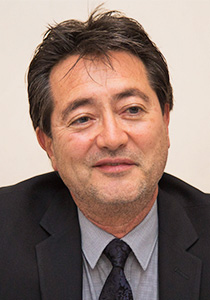 Born in Wakayama Prefecture in 1958, the eldest son of an American Jewish father and a Japanese American mother. Began his career in motion pictures in 1980 on the crew of Terayama Shūji’s French-Japanese co-production Les fruits de la passion (Shanhai ijin shōkan; Fruits of Passion, 1981). Has been assistant director for such Hollywood hits as Black Rain (1989), Last Action Hero (1993), Contact (1997), Remember the Titans (2001), and Transformers (2007). Was the US segment director for the Japanese film Rōrerai (Lorelei: The Witch of the Pacific Ocean, 2005) and co-wrote and co-directed Taiheiyō no kiseki—Fokkusu to yobareta otoko (Oba: The Last Samurai, 2011). Made his solo-directorial debut with the Japanese motion picture Saidoweizu (2009), based on the 2004 American film Sideways.

Sugihara Chiune (1900–86), sometimes referred to as “the Japanese Schindler,” was a diplomat who saved thousands of Jewish refugees fleeing from the Nazis by issuing visas from Lithuania in defiance of orders from his superiors in Japan. He was dismissed by the Ministry of Foreign Affairs after World War II and lived in obscurity, unrecognized in his homeland until relatively recently. In 1985, one year before Sugihara’s death, the Israeli government named him Righteous Among the Nations in recognition of his efforts on behalf of Jews during World War II. MOFA reinstated him posthumously in 1991.

The new motion picture Sugihara Chiune (Persona Non Grata), which opened in Japanese movie theaters on December 5, tells the story of the diplomat’s quiet battle to provide thousands of desperate refugees with a means of escape. It stars Karasawa Toshiaki as the Japanese vice-consul in Lithuania, known to those he aided as Senpo (an easy-to-pronounce reading of his given name), and Koyuki as his wife Yukiko, alongside a credible international cast featuring several top-tier Polish film stars, who lend the drama realism and depth.

Director Cellin Gluck, the son of an American Jewish father and a Japanese American mother, was born and raised in Japan. He filmed the entire movie in Poland with a mainly Polish crew. A multicultural perspective is fundamental to the film, as it is to the director’s life and career. We talked to Gluck about the artistic aims and personal significance of his new film.

Quiet Heroism of an Ordinary Man

Gluck's goal in directing the film was not to narrate the story of some larger-than-life Japanese hero but to explore the process by which an ordinary individual, faced with a terrible dilemma, can come to a heroic decision. 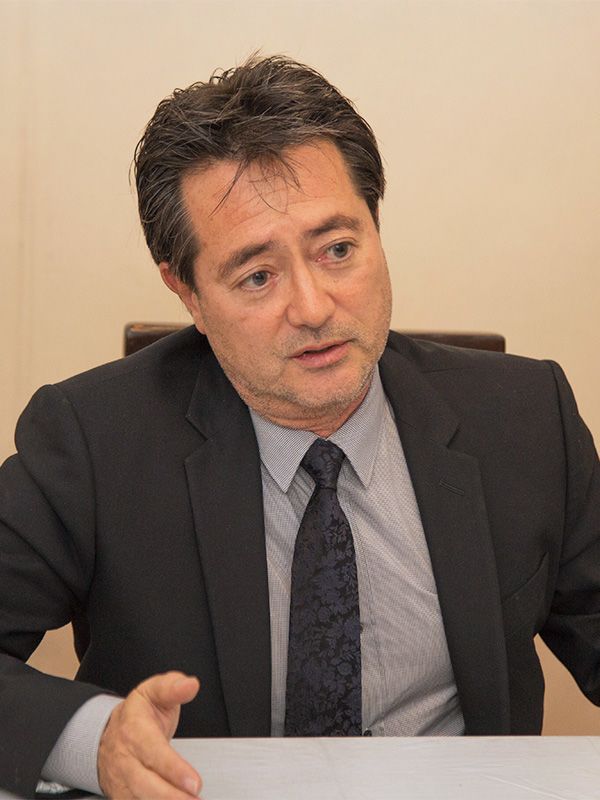 “It's like they say: Extraordinary things happen to ordinary people. Heroes are born when ordinary people respond to extraordinary circumstances. Senpo decided that for him, this was the right choice to make, at least at that point in time,” says Gluck. “He didn't advertise or flaunt his heroism. He just did what he thought was right, and as a result, thousands of people's lives were saved, and their descendants eventually numbered in the tens of thousands. That’s what made him a hero.”

Gluck himself knew little about Sugihara before he began the project. He recalls coming across him in a book called The Fugu Plan, concerning prewar Japanese proposals to resettle Jewish refugees in Japanese territory, and thinking, “So this is the guy they call the Japanese Schindler.”

Having learned more about Sugihara, Gluck takes issue with the comparison to Oskar Schindler, made famous by Steven Spielberg’s 1993 film Schindler’s List. “Schindler rescued people close to him, who worked in his own factory. Senpo rescued thousands of people he didn’t even know. That’s something quite different,” he says.

At the same time, Gluck stresses that Sugihara was not the only diplomat to go out on a limb to save Jewish lives by issuing visas in defiance of official policy. “There was also a Chinese consul in Vienna and an American consul in Marseilles (among others) who saved many Jews that way,” he notes.

While the movie is being released in Japan as Sugihara Chiune, Gluck felt strongly about preserving the original English title Persona non grata, a diplomatic term for an unwelcome foreigner. Before the war, the Russian government declared Sugihara persona non grata, citing intelligence activities, and denied him entry into the country, making it impossible for him to assume his post at the Japanese embassy in Moscow. As Gluck sees it, this “experience of being despised and shut out” made it possible for him to empathize with the Jews and their plight as they desperately sought a safe haven. The title thus refers not only to Sugihara but to all those who found themselves shut out and ostracized during this era.

The multifaceted perspective Gluck brings to his subject matter may help explain the basic tone of the film, which deliberately avoids the kind of heavy-handed, overproduced histrionics all too common in movies of this ilk. Karasawa’s interpretation of the role of Sugihara dovetailed nicely with Gluck’s low-key approach.

In June 1940, as hostilities spread in the wake of Hitler’s invasion of Poland, the Soviet Union annexed Lithuania. With most of Western Europe under Nazi control and the majority of countries barring immigration of Jews from Nazi-occupied Europe, thousands of desperate Lithuanian and Polish Jews descended on the Japanese consulate in Kaunas, Lithuania, where Sugihara served as vice-consul. They hoped to receive the documents they needed to travel across Russia by Trans-Siberian Railway, cross to Japan, and from there eventually find safe haven in the United States or elsewhere.

Sugihara’s superiors at the Foreign Ministry ordered him not to issue visas to anyone lacking the funds and documentation to leave Japan for a third destination. But Senpo, having learned from Soviet authorities that the consulate in Kaunas would close in a month’s time, decided to issue as many visas as he could in the time remaining. The film’s depiction of Sugihara and his staff as they spend hours and hours churning out visas for the desperate refugees is all the more moving for its restraint.

Karasawa Toshiaki gives a powerful performance as Sugihara Chiune with the support of an outstanding Polish cast, including Borys Szye as Pesh, a Polish spy who helped Sugihara gather intelligence (left), and Cezary Lukaszewicz as Gudze, a German Lithuanian also employed by the Japanese consulate.

Shot in Poland, Screened in Lithuania

“One elderly lady [in the audience] gave me a scolding,” Gluck recalls with a smile. “It doesn’t look like Kaunas!’ she complained. ‘Why didn’t you film it in Kaunas?’” Despite her chiding, Gluck is glad he was able to shoot the movie in Poland, which has a sophisticated film culture rooted in a distinguished cinematic history.

“The majority of refugees that Senpo saved were Polish Jews,” notes Gluck. “So it was a big plus to film in Poland and to have such outstanding Polish actors as part of the cast.” 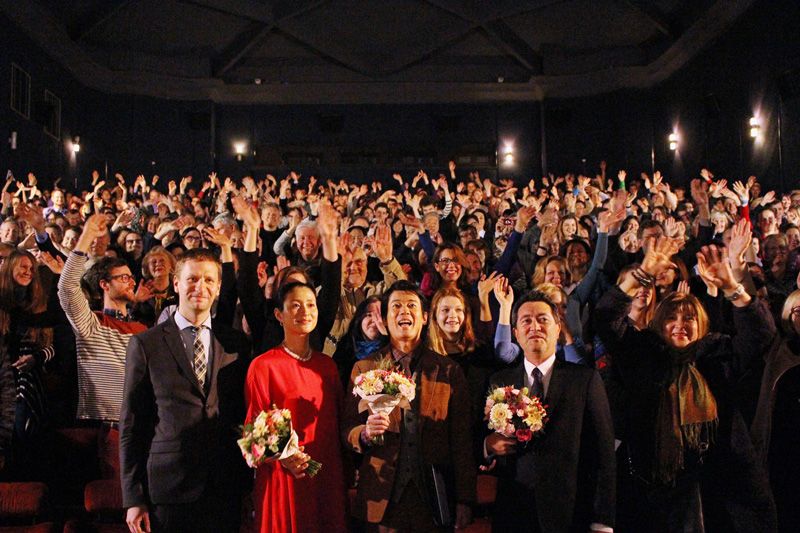 Gluck and his cast receive an enthusiastic ovation at the October 2015 world premiere of Persona Non Grata in Kaunas, Lithuania, where the film’s main action takes place. 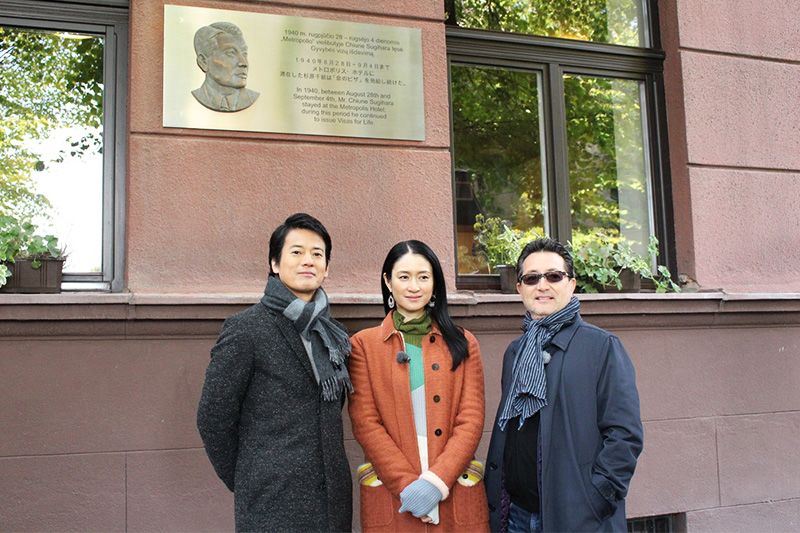 Karasawa, Koyuki, and Gluck in front of the Hotel Metropolis in Kaunas, where Sugihara stayed briefly near the end of August 1940, in advance of the consulate’s imminent closure. He continued to write and issue visas from the hotel right up until he left the country at the beginning of September.

Central to Gluck’s film is the plight of history’s personae non gratae, most notably the Jews during World War II. Not coincidentally, such experiences and memories are an integral part of Gluck’s own family history.

“When my father was 17, he lied about his age and joined the navy because he wanted to fight the Nazis. My mother was interned at the Rohwer War Relocation Center in Arkansas along with others of Japanese ancestry. All those wartime stories I heard from my father and mother are part of my internal database.” According to Gluck, this background allowed him to supply context and help his actors give a convincing performance.

Gluck was also mindful of something his mother told him when he was in high school, which he never forgot: “The misfortunes in our lives can lead to good fortune.” As she explained, the experience of relocation and internment as a Japanese American was a bitter one, but many young nisei were able to leave the camps by joining the military, working on nearby farms, or going to Eastern and Midwestern colleges. In fact, a considerable number were placed in such colleges with the help and financial support of the US government—on the condition, of course, that they swear allegiance to the United States. Gluck’s mother, who had been a typist before her internment, ended up studying dress design at Hunter College in New York, and it was in New York that she met her future husband, Gluck’s father. “If they hadn’t met, I wouldn’t have been born.” 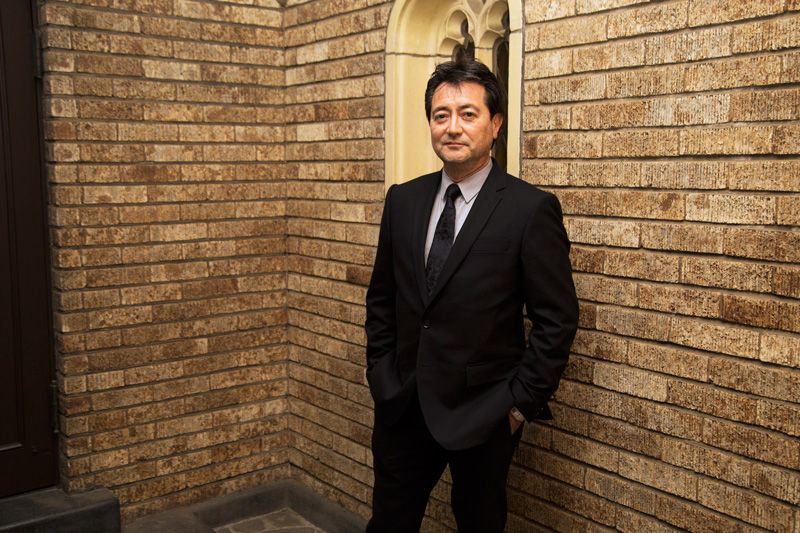 Cellin Gluck felt a strong personal connection with the story and historical setting of Persona Non Grata owing to the wartime experience of his Jewish and Japanese American parents and his own experience growing up a foreigner in Japan.

Cellin Gluck’s father was a Japanophile and archeologist specializing in ancient Persia. Cellin was born in Wakayama Prefecture and spent most of his youth in Hiroshima and Kobe, although the family also lived in Iran at one point. Although raised in Japan and fluent in Japanese, Gluck was regarded as a gaijin (foreigner) and he identified strongly as an American. Before he traveled to the United States as a college student, he never thought of himself as an Asian American. He was actually taken aback when someone invited him to join the university’s Asian American student organization.

In the past, Gluck liked to think of himself as a “third culture kid”—a term used to refer to people who spent formative years outside of their parents’ native country and are able to bridge the gap between the two cultures. “Nowadays,” he says, “I prefer to think of myself and similar offspring as ‘multicultural kids’ or ‘global kids.’”

In addition to the focus on Sugihara’s own actions, Persona Non Grata includes a historically based depiction of the liberation of concentration camp survivors from one of the Dachau sub-camps by the all-nisei 522nd Field Artillery Battalion. The 522nd was an offshoot of the 442nd Regimental Combat Team, a fighting unit composed almost entirely of soldiers of Japanese ancestry, many of whom had previously been relocated to internment camps as enemy aliens. The 442nd Regiment was renowned for its valor. It was the most decorated unit for its size and length of service in the history of American warfare, and its casualty rate was also among the highest.

Gluck put his heart and soul into the scene in which Japanese American soldiers rescue a young Jewish concentration camp survivor, an episode fraught with personal significance. For movie-goers, even a passing knowledge of the director’s unique family background should lend added emotional impact to the scene and to the film in its entirety.