Behind the Scenes of Obama’s Hiroshima Visit

Politics Dec 6, 2016
Barack Obama’s May 27 visit to Hiroshima brought together a president and a survivor of the 1945 atomic bomb in an image of compassion that went around the world. We talked to the documentary film producer who shed light on Mori Shigeaki’s work. 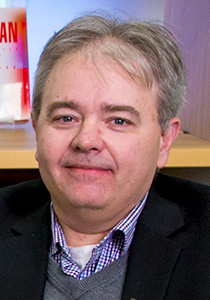 Born in 1970. Graduated from Stonehill College in 1992. Has spent almost 25 years in the production industry in Boston, and is currently the director of creative services at Connelly Partners. Paper Lanterns is his first film. Resides in Billerica, Massachusetts, with his wife Carolyn and his two children.

An Embrace Seen Around the World

There are many memorable moments from Barack Obama’s eight years as president of the United States. But for many people, both in Japan and around the world, the most touching and indelible was also one of the simplest. 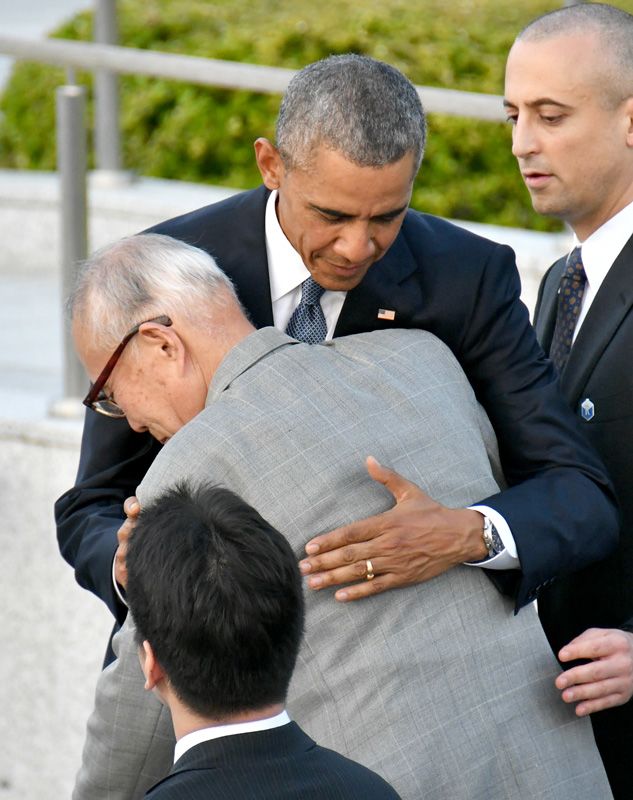 Hibakusha and historian Mori Shigeaki receives thanks for finding the families of American A-bomb victims and having their names inscribed on the list of hibakusha. (© Jiji)

On May 27, 2016, just a few meters from the eternal flame that burns in the heart of the Hiroshima Peace Memorial Park, President Obama placed his hand on the shoulder of a clearly emotional hibakusha, a survivor of the atomic bomb that laid waste to this city in 1945. Then, in a moment of unscripted compassion, he gently pulled 79-year-old Mori Shigeaki to his chest and the two men hugged.

The video and still images of that instant went around the world, including into the home outside Boston of the documentary-maker who was responsible for bringing the two men together. And while the world’s media initially reported that Mori was merely a survivor of the first atomic bomb used in war, Barry Frechette knew there was a great deal more to the story.

“May 27 was quite a day for us,” the 46-year-old Frechette told Nippon.com. “We had heard a day in advance that Mr. Mori had been invited to attend the event and we had hoped that the president would be able to meet him—but what happened was completely beyond our expectations.”

Neither Mori nor Frechette had anticipated that Mori would be ushered to the front row of the seats set aside for dignitaries attending the event.

“I think that when they embraced, every one of us in the Paper Lanterns family—and that is what we have become—had a little collective cry,” he said. “All of us were there with him in spirit—everyone who worked on the film, the people from the village, and the twelve Americans and their families.”

Paper Lanterns is the documentary that Frechette started working on after discovering that his uncle had been a friend of a US airman who was a prisoner of the Japanese and had been killed when the atomic bomb was dropped on Hiroshima. In total, 12 US air crew died alongside tens of thousands of Japanese, Koreans, and others in the attack.

Mori, who was 8 years old when the bomb was dropped on his home town, was nearly killed himself. Speaking to Nippon.com in Hiroshima shortly before his unexpected meeting with President Obama, he said the blast from the bomb threw him into a stream and that he was actually inside the mushroom cloud that formed above the city.

After graduating from university, he worked for a finance company and then a manufacturer of musical instruments. But he never lost an early passion for research and history. It was this passion that was piqued when, in the 1970s, he heard the tale of an American bomber that had crashed in mountains close to the village of Ikachi shortly before the end of the war.

The aircraft turned out to be the Lonesome Lady, a downed US Army Air Force B-24 Liberator. And so began the painstaking work of identifying all of her crew—as well as the crew of another Liberator, the Taloa, and two US Navy dive-bombers. These men had been moved to Hiroshima for interrogation but died when the bomb, nicknamed Little Boy, detonated about 600 meters above the city on the morning of August 6, 1945. 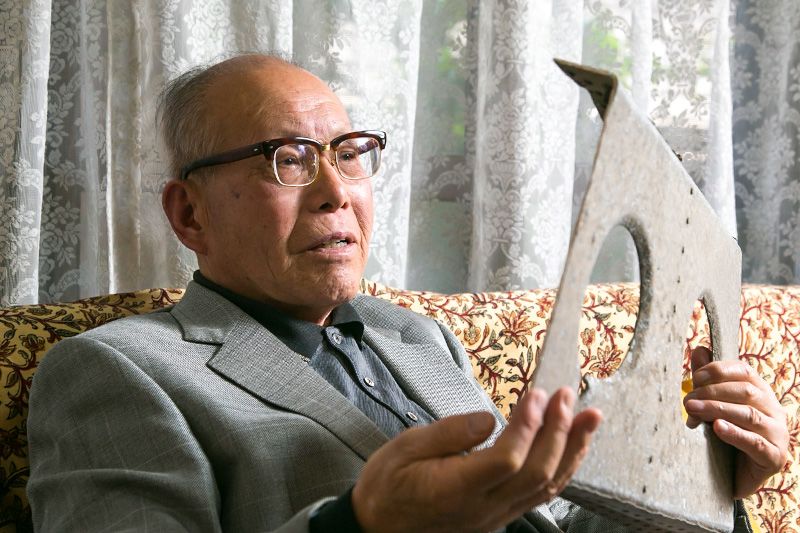 Mori holds a piece of wreckage from the B-24 Taloa. (© Kusano Seiichirō)

Over the next 40 years, Mori amassed a vast collection of paperwork and managed to trace the families of all the US servicemen who died in the attack. Through the family of Normand Brissette, one of the POWs killed in the blast, Mori’s quest came to the attention of Frechette, who said he was hooked on the tale immediately.

The result was Paper Lanterns, which clearly came to the attention of US officials just days before Obama became the first sitting US president to visit Hiroshima, more than 70 years after it was leveled. 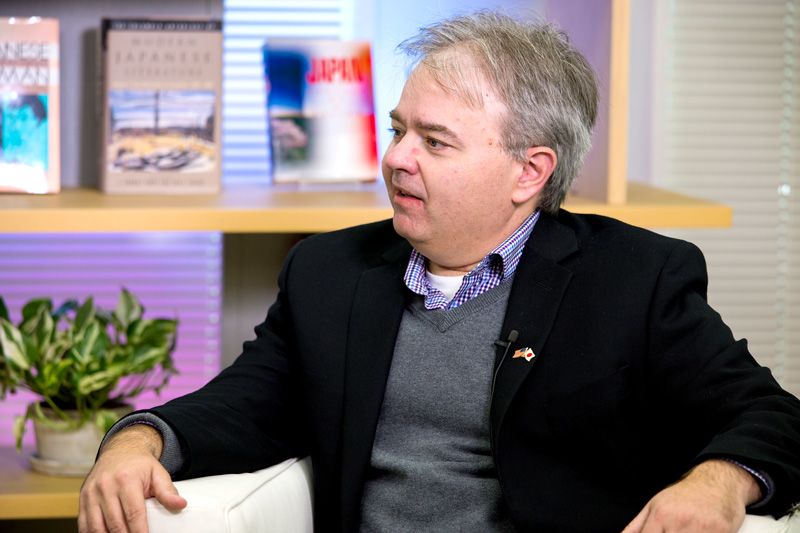 “There was a wonderful line in the president’s speech about ordinary people. For us, this entire film is about ordinary people affected by terrible events but who are still finding ways to be kind to other people,” said Frechette, who was in Japan in early November for a number of screenings of the documentary and to attend the Hiroshima International Film Festival, where it was the opening screening. He also travelled to Ikachi, now part of the Yamaguchi Prefecture city of Yanai, to once again meet the villagers who are such a key part of the story.

Putting Mori in the International Eye

The movie was already turning heads before Obama’s May 27 Hiroshima visit, but the president publicly reaching out to Mori has taken interest to a new level, Frechette admitted.

“When we started, it was partly because we wanted to capture pieces of history before they were lost,” he said. “There was a lot of interest in the Japanese press when we were here in Japan shooting in 2015, but it didn’t catch on internationally until the film was finished and President Obama came here.

“That really put the spotlight on Mori and his work.”

Within hours, the world’s media had made the connection between Mori, his efforts to remember the American victims of the bomb, and Frechette’s film. And the telephone started ringing off the wall. “When these phone calls started coming in, it was like I was leading somebody else’s life,” said Frechette, shaking his head in lingering wonder at the chain of events that led up to that moment.

“As an American, I was very proud of President Obama’s speech, as no sitting president had ever gone to Hiroshima and I felt it had been far too long,” Frechette said. “The president delivered an incredible speech—and, having seen those images for myself, I know it also gave great pleasure to Mr. Mori.

“It was overwhelming. I think the moment when Mr. Mori became emotional and the president just leaned in and comforted him was iconic for all of us,” he said. “It brought closure to a lot of people.”

Continued Recognition for a Tireless Researcher

Mori was recognized for his work on December 2, when he was awarded the Kikuchi Kan Prize. The prize honors achievements in the field of literary culture and is presented by the magazine Bungei Shunjū and the Society for the Promotion of Japanese Literature.

Accepting the award, Mori expressed his determination to continue his life’s work. “My research has not yet finished; I’m still in the middle of the process,“ he said, his determination clear. “As long as I live, I will continue my research to ensure that the same thing does not happen again.”

Mori also touched upon the memorial day he spent in Hiroshima with Ralph Neal, the nephew of US Army Staff Sergeant Ralph Neal, one of the POWs who died in the blast. The two men launched paper lanterns on the river that flows through the city in memory of those who had lost their lives.

Ralph was delighted to discover that the custom of consoling the souls of the people who died continued to this day. He also mentioned that the film Paper Lanterns is presently being screened in many parts of the United States.

Closing his comments, Mori said, “I would like to express my gratitude on behalf of the POWs from the United States, Britain, and Holland who were killed by the bombs.” 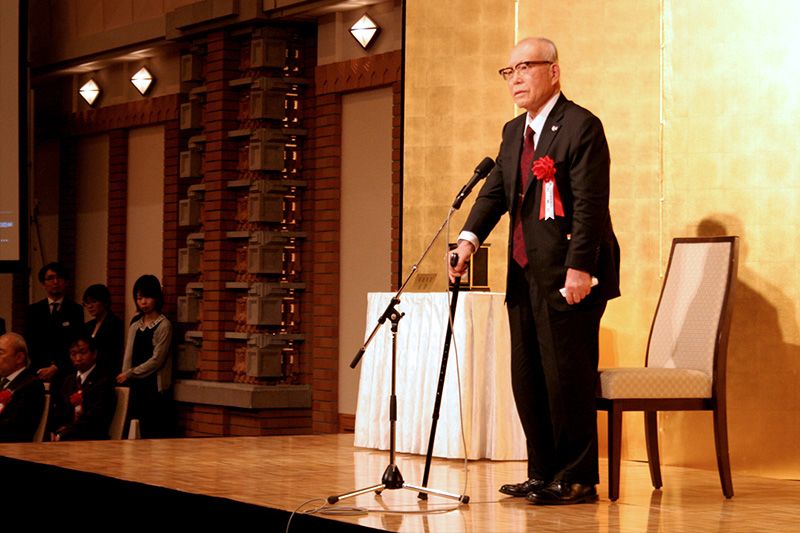 Mori was awarded the Kikuchi Kan Prize on December 2.

Mori and Frechette are regularly in contact, largely via email, as Mori continues his work to track down additional information on the airmen who died in Hiroshima. More recently, he has expanded his research into POWs who were held in camps near Nagasaki when the second atomic bomb was dropped in 1945.

“He’s incredible,” said Frechette. “It’s a lot harder for him because a lot of the POWs were Dutch and there is a language barrier, but he keeps letting us know about new witnesses he has found and interviewed. He never wants to stop; there’s always something new to be uncovered. I love getting his e-mails and updates.”

Behind the Scenes of Obama’s Hiroshima Visit

(Originally written in English based on a November 8, 2016, interview. Video by Ōtani Kiyohide of Nippon.com.)