A Life in Music: An Interview with Composer and Producer Murai Kunihiko

Culture Jun 13, 2017
Composer, producer, and founder of Alfa Records Murai Kunihiko played a leading role in laying the foundations for J-pop in the 1970s. This included bringing the band Yellow Magic Orchestra to a global audience. In this interview, he shares his musical journey. 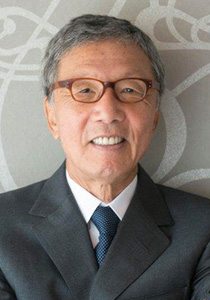 Born in Tokyo in 1945. Graduated from Keiō University in 1967, making his debut as a composer in the same year and going on to write more than 30 hit songs in the 1960s, 1970s, and 1980s. Composed some 300 works in all, including the well-known “Tsubasa o kudasai” (Wings to Fly) and “Niji to yuki no barādo” (Ballad of Rainbow and Snow), the theme song for the 1972 Winter Olympics in Sapporo. Also wrote music for films including Itami Jūzō’s Tampopo. Founded the music publishing company Alfa Music in 1969 and the record company Alfa Records in 1977. As a producer, he worked with singer-songwriter Arai Yumi (now Matsutōya Yumi) and Yellow Magic Orchestra. In 2017, he marks 50 years in his music career, 25 years each in Tokyo and Los Angeles.

The Beginning of a Life in Music

INTERVIEWER Tell us how you got your start in the music scene. 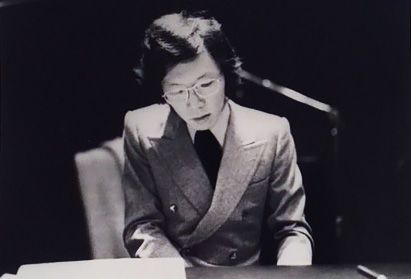 Murai Kunihiko at 25 or 26. He composed more than 300 songs in five years and promoted many artists as president of Alfa Music, the former name for Alfa Records. (Courtesy of Murai Kunihiko)

MURAI KUNIHIKO My work is based on jazz and classical music. I was crazy about big band since I was in junior high school, and at university I furthered my musical education by playing the piano and saxophone in the Keiō Light Music Society. I also ran a record shop while I was still a student, so I had a constantly updated sense of what songs were going to be hits, though of course, my personal tastes were more important than the hype. Basically, I loved music, and as I was putting my heart and soul into it, I became a composer.

INTERVIEWER In addition to composing and producing, you founded Alfa Records, heading the company and setting up a partnership with US major A&M Records. What were your formative influences in those days?

MURAI When I was in high school, I met Kawazoe Hiroshi,(*1) the owner of the Chianti restaurant,(*2) who made a huge contribution to international appreciation of Japanese art and culture in the postwar period. The restaurant was a salon for those active in the literary and artistic fields in Japan and overseas. While I was interacting with people of all ages with widely varying careers, I felt firsthand the cultural shift as Japanese society advanced from the late 1960s into the 1970s. I began to think that in Japan, too, it would be a difficult time for those who didn’t protect their intellectual property.

At that time, there was little awareness of copyright even among people in the music business in Japan, and very few thought about copyright in other countries. Meeting Kawazoe and going to Chianti made me more sensitive to trends at the cutting edge of the music business.

Later, Kawazoe arranged for me to travel to Paris for a friend’s recording. This led Eddie Barclay,(*3) the head of a French music publishing company, to ask me, “Do you want to run a music publishing agency in Japan?” Barclay immediately introduced me to an American music publisher, Screen Gems–Columbia, which was how I started to meet people in the music business in the West. I was spinning around the world like a satellite, going to Paris, London, Los Angeles, and New York. In a whirlpool of all the latest information, I began building close relationships with people around the world through music. 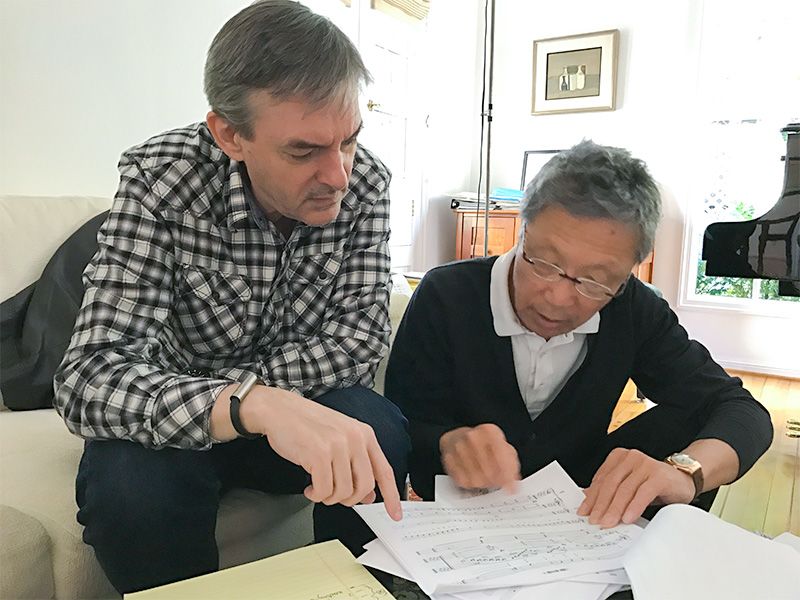 Murai in Los Angeles with the jazz pianist Christian Jacob, left, discussing the “LA Meets Tokyo” concert to be held in December 2017 at Bunkamura Orchard Hall in Shibuya, Tokyo. (Courtesy of Murai Kunichiko)

INTERVIEWER When you contracted with Screen Gems–Columbia, which managed songwriters like Neil Sedaka and Carole King, you encountered a lawyer who would play a role in bringing Yellow Magic Orchestra to a world audience.

MURAI Carole King’s producer Lou Adler came to Japan in 1972. When I played some Hosono Haruomi for him, he was thrilled: “This bass sounds great.” I was happy, as I had done a lot of recording work with Hosono, and I felt that a time would definitely come when Japanese music would connect with listeners in other countries. Adler’s lawyer, Abe Somer, came with him and we hit it off together. We remain friends to this day.

Hosono became the music director for Yuming [a nickname for Arai Yumi] and other Alfa artists. Later I signed him on an exclusive contract, saying, “Let’s make something that sells worldwide,” and that was how YMO was born. 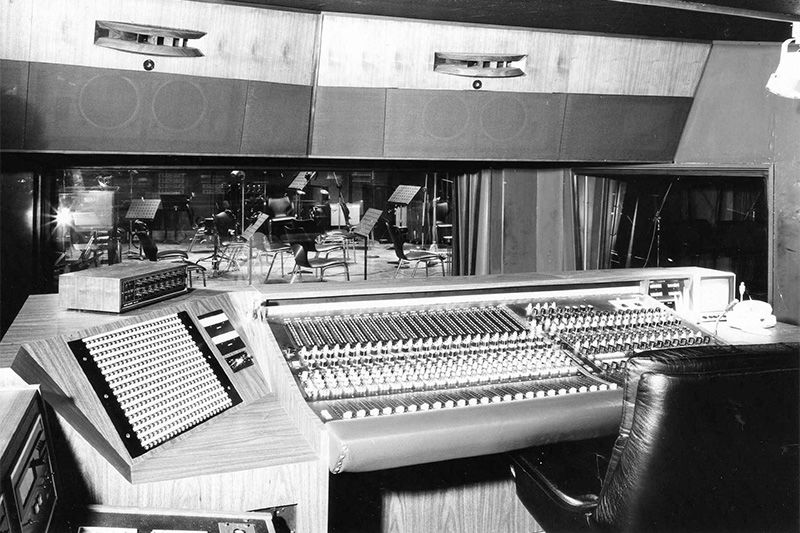 Many of Japan’s top artists recorded in Studio A, including Arai Yumi and YMO. Arai’s debut Hikōkigumo (Vapor Trails) was the first album recorded here. (Courtesy of Yoshizawa Norio)

“If it doesn’t excite you, how can you get it to excite other people?” This is at the heart of being a producer. Artists are judged by their talent, their essential nature, and their personality, but no matter how much you train average people, they’ll never become superstars. So you have to find people who already stand out, and polish them further.

INTERVIEWER In 1978, Alfa jumped ahead of Japan’s major music labels to sign a contract with the US giant A&M Records. Your reciprocal contract was a key strategic move in bringing YMO to the world.

MURAI The A&M partnership didn’t come out of nowhere. I knew Jerry Moss,(*4) the chairman, and we had talked about the music we each liked. The key man for the contract was Abe Somer, and the fact he was an attorney for A&M was huge. From a strategic perspective, we signed a reciprocal contract.

A&M had employees all over the world, ready to act as soon as they got an assignment. Under the reciprocal contact we would make every effort to sell A&M’s records in Japan, and in turn we wanted A&M to globally distribute the Japanese music that ALFA picked up as promising.

Around this time, Hosono and YMO started recording. I looked after the business side of things and Hosono took care of the music. As the relationship deepened between us and A&M, one of the A&M producers—Tommy LiPuma, who produced George Benson, Diana Krall, and many other important artists—came to Japan and watched YMO perform on stage. “I want to make YMO big in America,” he said. 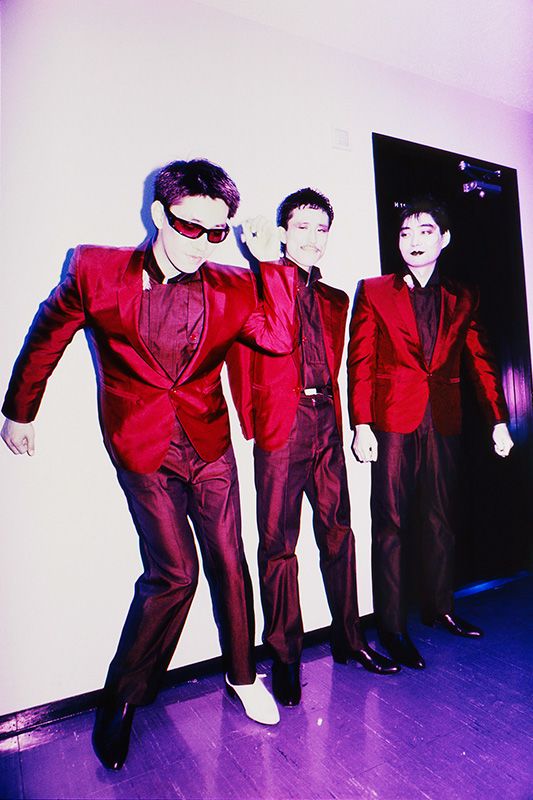 We soon began selling records in the United States, and then holding concerts. YMO toured North America and Europe for two years running. When that was over, they came back to major stardom in Japan and in the world. I don’t remember how many millions of copies we sold, but it was a great accomplishment to make an impact in the global market. YMO performed in 2013 at the Hollywood Bowl in Los Angeles and were welcomed, even by younger audiences, who consider YMO one founding act in the techno music scene.

INTERVIEWER This December you’ll hold a concert in Tokyo to celebrate 50 years of your career as a composer. You’ll be playing many old favorites, but presenting them in new forms, like a new jazz arrangement of “Wings to Fly.” What keeps you so actively involved in creating?

MURAI Music is playing in my head from the very moment I wake up in the morning. It’s so much fun to select tunes for the concert and think about arrangements. I might want to do one tune in a big-band style, or I might think of a particular person to perform one of my songs.

Some questions I’ve pondered for many years include how to think about Japanese music within the context of Western music history and what direction I should take my own work next. Jazz and rock emerged in the twentieth century, but what new genres will burst onto the scene in the future? Where from? That background is also interesting.

INTERVIEWER Online distribution has reduced CD sales, even as old albums are being reappraised as listeners seek new diversity. How do you feel about these changes?

MURAI Considering the developments so far, it’s impossible to predict how digitization and the great Internet revolution will continue to affect the industry. The fact that music rights have become virtually worthless is a serious problem. Any hope rests in people returning to the thrill of live performances. I want to hear good music with good sound quality. What is required to ensure that this experience remains available? This is what I think most about these days. 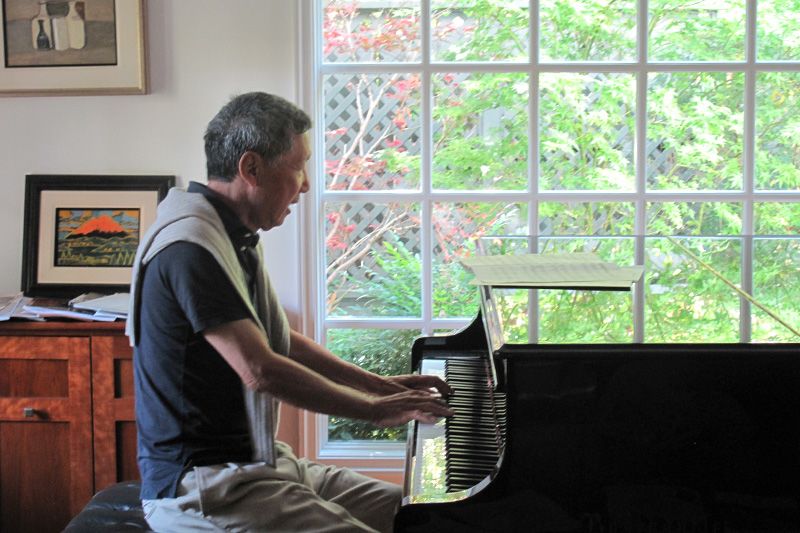 In 1992, Murai moved from Tokyo to Los Angeles. He now divides his time between Japan and the United States as he continues his musical activities. On December 15, 2017, a live concert celebrating his 50 years of composing will be held at Tokyo’s Bunkamura Orchard Hall. It includes a collaboration with six-time Grammy winner Jorge Calandrelli as well as Christian Jacob and The Tierney Sutton Band, who provided the soundtrack for the film Sully. (© Matsuki Naoya)

(*1) ^ During the 1930s Kawazoe studied in Paris, where he got to know Robert Capa, Salvador Dali, and Jean Cocteau. As head of the Azuma Kabuki troupe, he oversaw performances in Europe and North America from 1954 to 1956.

(*2) ^ A trailblazing Italian restaurant that opened in Tokyo in 1960.

(*3) ^ Eddie Barclay was a very famous figure in the music business in the 1960s and 1970s in France. His company, Barclay Records, released the albums of Charles Aznavour and Jacques Brel.

(*4) ^ Jerry Moss founded A&M records with Herb Alpert in 1962. A&M became one of the most successful independent record companies from the 1960s through the 1980s.The Carpenters, Carole King, the Police, Sting, Supertramp, Burt Bacharach, and Quincy Jones were A&M artists.