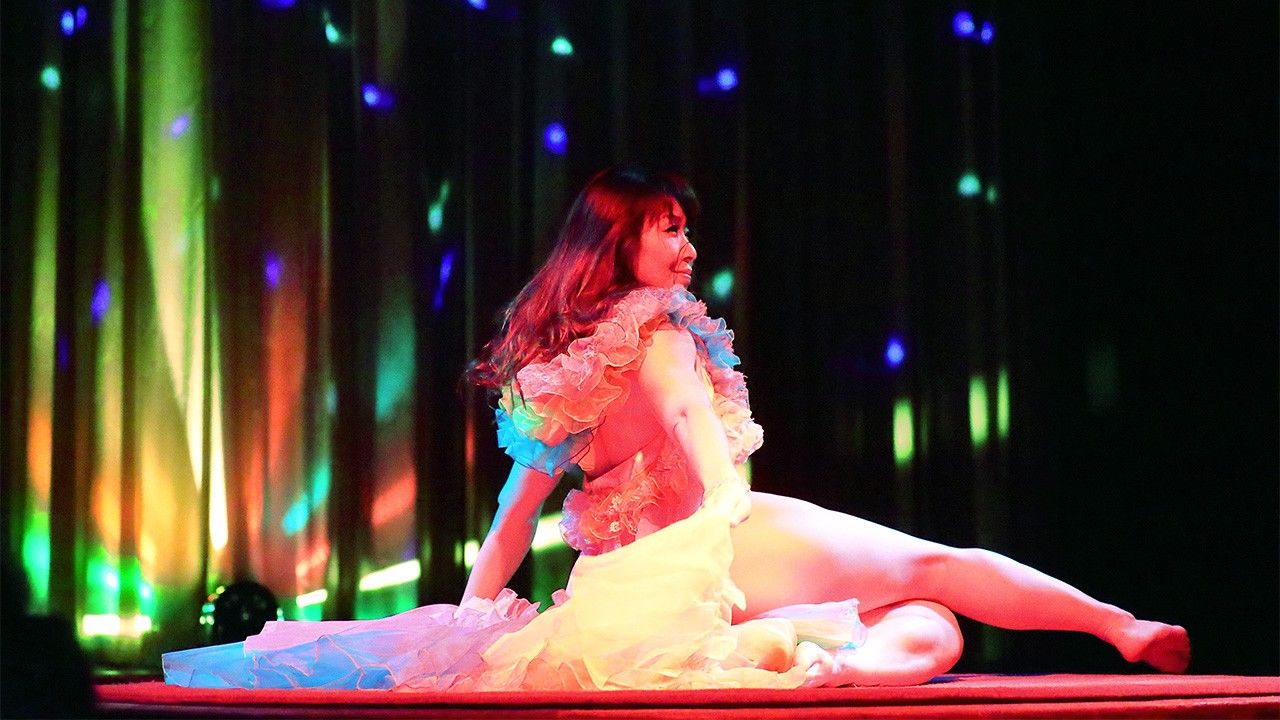 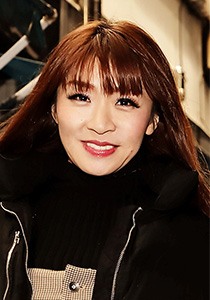 Actress. Born in Saitama Prefecture in 1974. Started out in the adult video industry in 1999 before switching to softcore pinku eiga (pink films) in 2005, adopting the stage name Kōda Riri. Since retiring from adult movies, she has worked as a backup dancer for artists in Japan and overseas and appeared as a background actor in a number of television programs, commercials, and direct-to-video movies. Performs as an exotic dancer at Japan’s few remaining strip clubs.

Striptease has long been a feature of Japan’s prolific adult entertainment industry. It started to thrive in the the early postwar years, developing its own unique culture that was adored by literary giants like Nagai Kafū (1879–1959), who wrote about adult entertainers and sex workers.

According to National Police Agency records, in 1975 Japan boasted some 300 strip venues in far-flung locals from Hokkaidō in the north to Okinawa in the south. Changing tastes and the rise of the Internet have taken their toll, and today, the number of clubs has dwindled to a mere 20, mostly in metropolises like Tokyo and Osaka and a few scattered in regional centers. Stripping, however, has seen a mild resurgence in the last few years led by young female fans attracted by the expressive aspects of the genre. 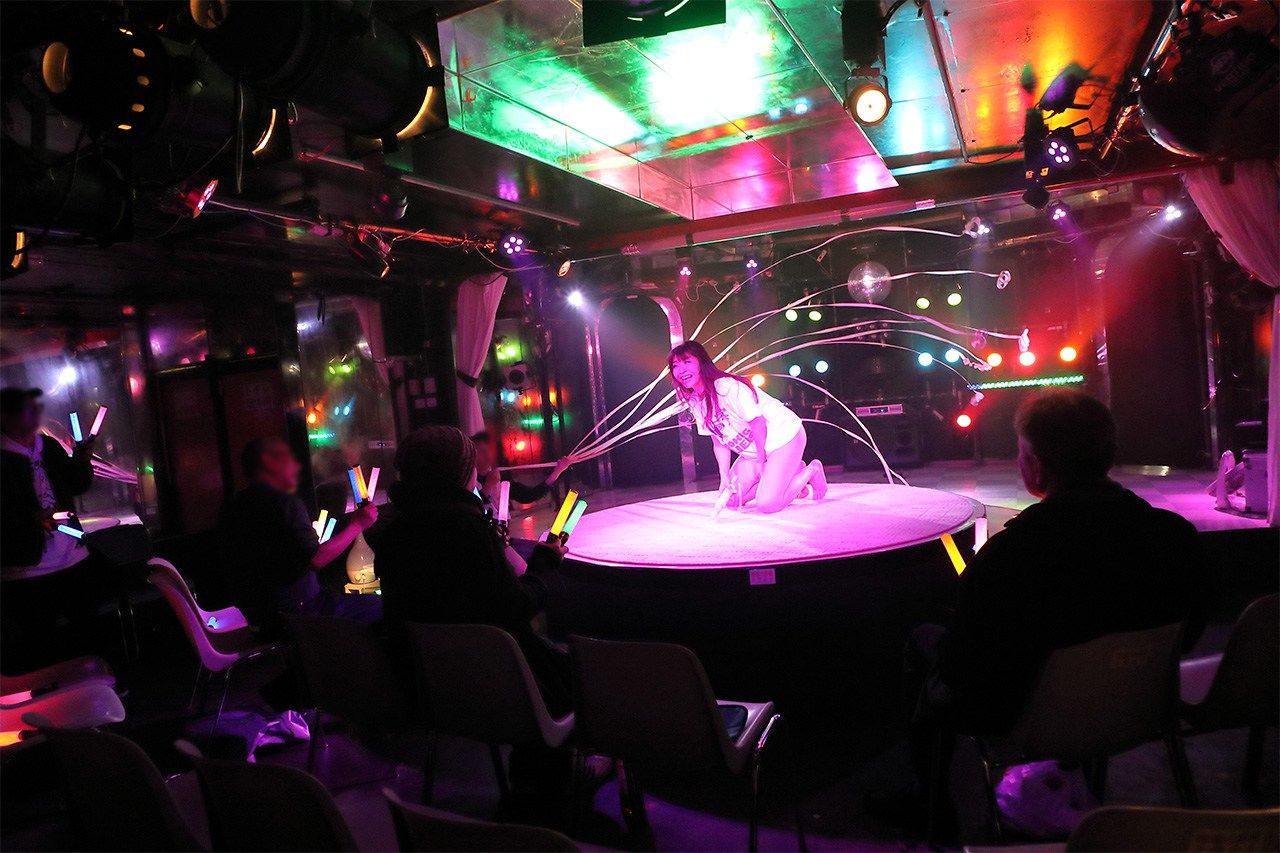 Kōda Riri is a popular performer who tirelessly roves among the few remaining theaters. Clubs operate 364 days a year—the only night off is New Year’s Eve—generally running 10-day programs. Typically, there are four shows a day, starting as early as 11 in the morning and continuing until late at night—a grueling schedule for dancers. When I catch up with Kōda, she has been performing nonstop for several months.

The pace is draining even for the energetic dancer. “Since I started, it’s been nearly impossible to take a break,” she exclaims. Shows feature five or six 30-minute performances, giving dancers around two hours off between appearances. “The Asakusa theater is different, though. It’s always had a revue-style show, and performers are always pressed for time.” After finishing a stint at one club, Kōda often has to catch an early morning flight to make her next gig. “The days just fly.” 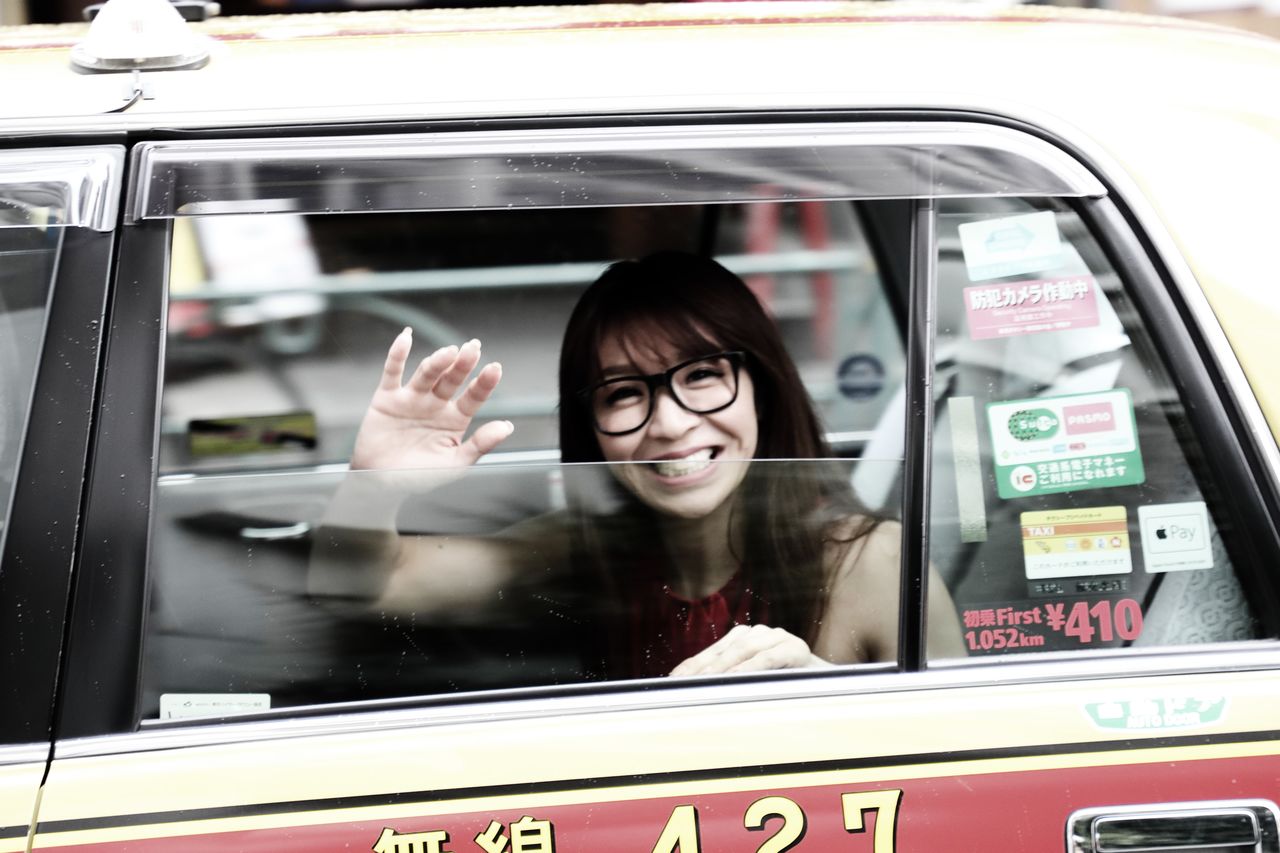 Kōda waves from a taxi after a rehearsal in Tokyo.

Asakusa refers to the theater Asakusa Rockza. Opened in 1947, it is Japan’s oldest strip club. A spacious venue seating 129 people, it welcomes female customers and newcomers along with the standard male crowd. There are five 90-minute shows a day, and depending on roles, performers may have very little down time during a typical 20-day run.

Although the strip scene largely caters to men, Kōda says there is a growing number of female fans coming to watch shows at Asakusa and who even travel to other venues to see their favorite dancers. “Each club has its own allure,” she explains. “Some are small, but may have better lighting. I try to take advantage of the different features when I’m dancing.” 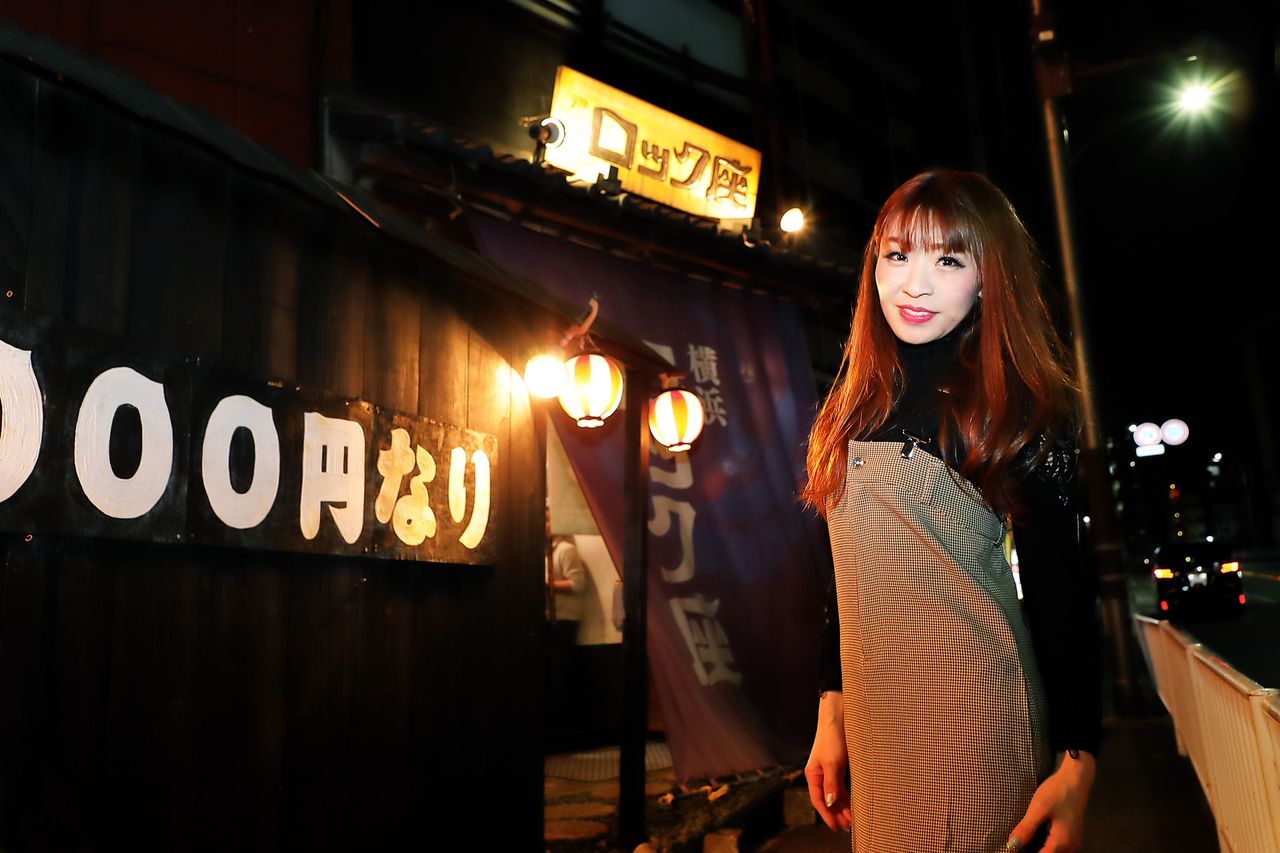 Stripping to the Music

Each dancer has creative freedom to develop their act, and Kōda decides every aspect—from choreography to music to costumes—of her repertoire of some 50 routines.

Although she initially had help from a choreographer, she says she now devises all her dances on her own. Instead of sticking to a set routine, she develops a basic structure that she then elaborates on when on stage. She explains that her freestyle approach lets her express herself better. “Sticking to the same moves isn’t my style,” she states in a casual tone. “It’s too rigid.” Kōda feels patrons have come to appreciate the spontaneity of her performances. “A heavily choreographed dance doesn’t vary from one performance to the next. But I adjust what I do each show.”

She includes dramatic elements in some routines, such as standing or sitting motionless, something quite distinctive for a stripper. “Dancers usually strike poses that show off their most attractive side, but I prefer power poses,” she declares. “I use my face and body to express emotions.” Laughing, she admits that her willingness to try new things can sometimes have the opposite effect of bewildering the audience. 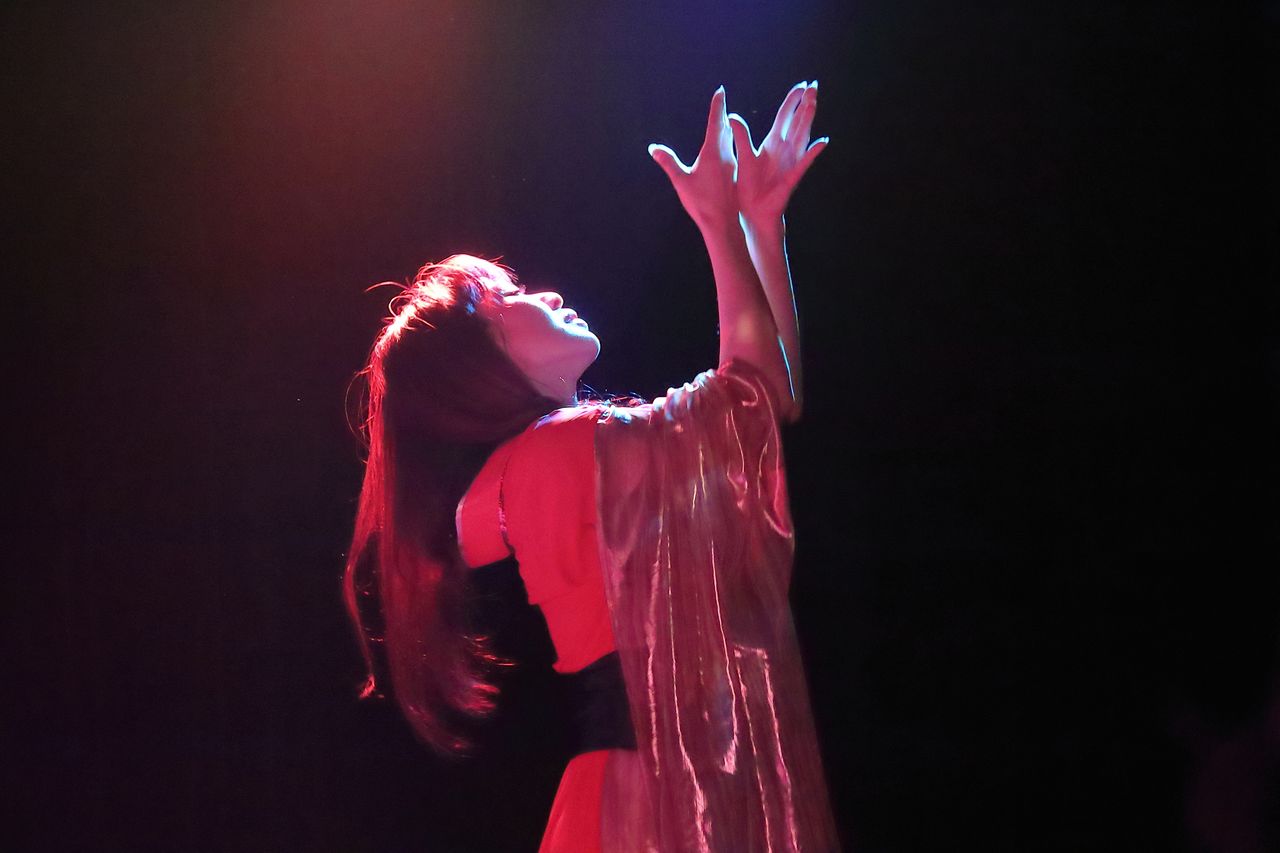 Kōda is aware that customers can enter clubs at any time and that some stay for multiple shows. To keep her act fresh, she performs three different routines from her repertory each day. When she moves to a new venue for another 10-day showing, she adjusts her routines to suit the next club, taking into consideration factors like lighting, if there is a curtain, stage size, and the length of the catwalk. While she takes a wholly artistic approach to her work, she also keeps her fans in mind, a characteristic of her service-focused and professional attitude.

“I design my program for the benefit of the patrons and to show my appreciation to them for making the effort to come and watch me,” she explains. However, she insists she also dances to express herself and is always working to strike a balance between the two. “I have to keep a close eye on viewer reactions while I’m on stage.” 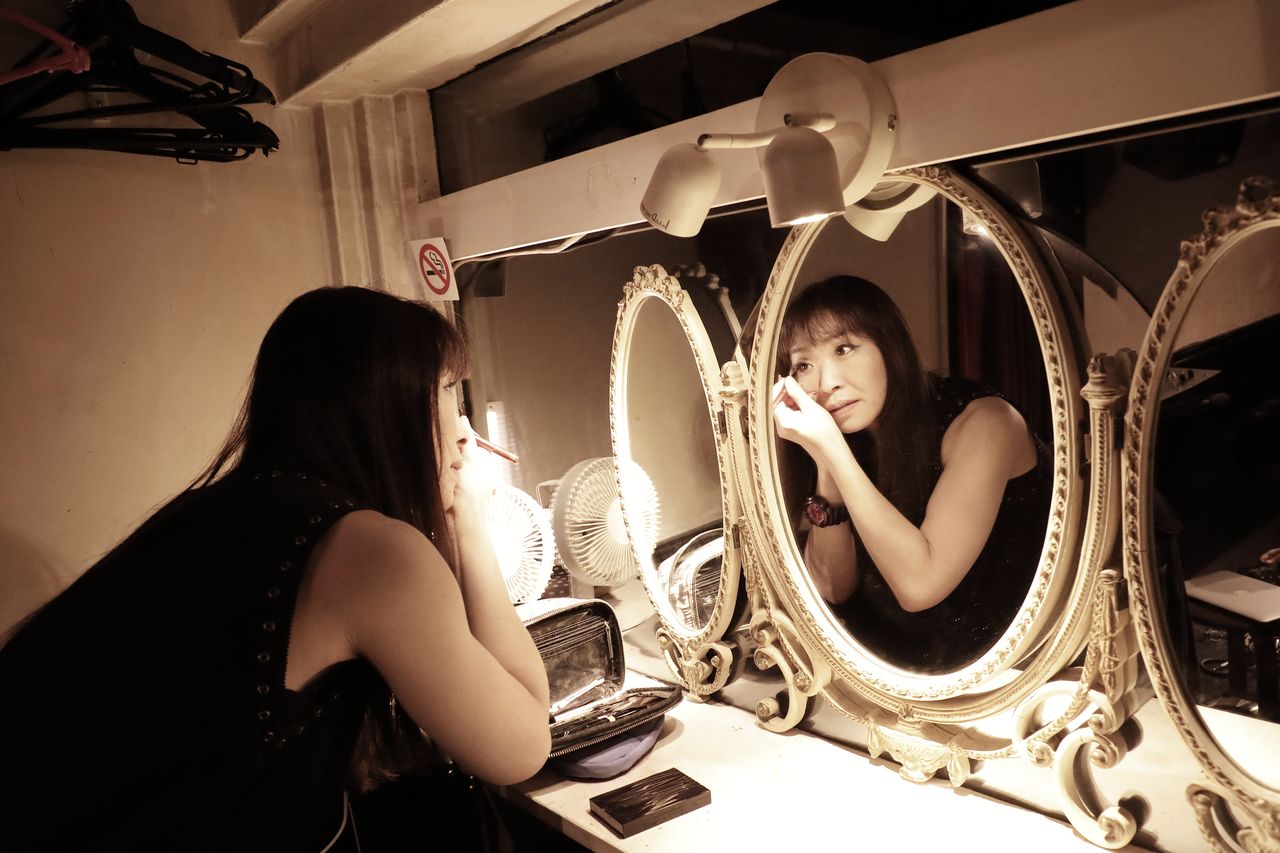 Kōda does her makeup for a performance with Li2MiHOLiC, a unit she formed with close friend Wakabayashi Miho, at the Asakusa Golden Tiger theater in September 2018.

From Blue to Pink

Kōda made her stripping debut in 2015 at the Shinjuku Newart, but she has been a fixture in adult show business for more than two decades. Her first job in her early twenties was as an office assistant, but she began acting in adult videos to make a little extra pocket money.

“In those days, a junior college-educated office worker like me didn’t make much,” she recalls. “I only ever planned for adult movies to be a side job, but it turned out to be good money.” Enticed by the prospect of further boosting her income, she expanded her activity in the industry. “I was nervous about word getting out, but I took care not to appear in posters or magazines to keep my work a secret.” 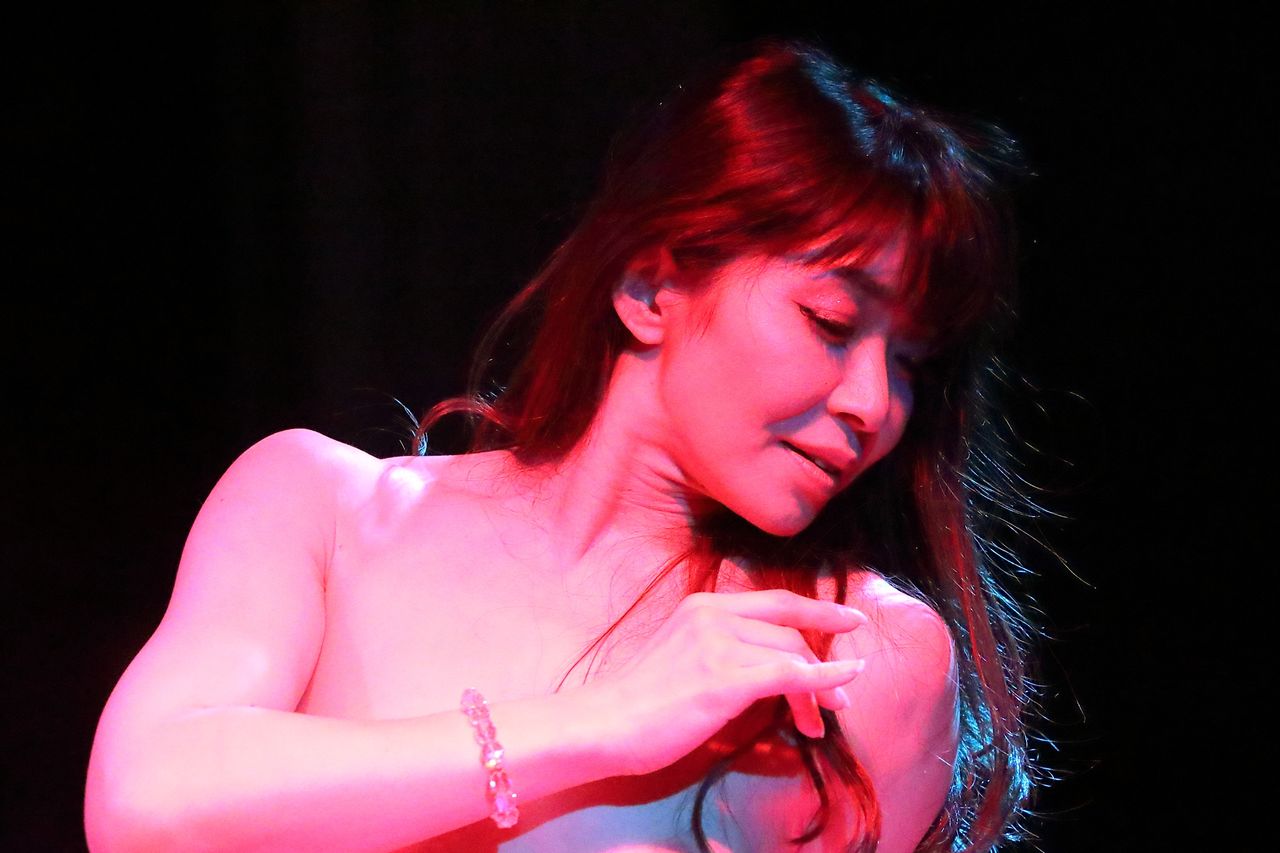 Kōda attributes her prolific output to being open to different types of work. “There’s no way I could have been in so many films if I only took lead roles,” she says. “I was game for any part as long as my name was in the credits.” Having never formally studied acting, she learned on the job. “I have always liked movies and I just wanted to perform. It’s fun being on the set.”

Pink films are now digitally produced, but nearly 100 of Kōda’s movies were shot on film, putting her among the last generation of actors to experience a now vanished era of movie making. “A director couldn’t reshoot scenes multiple times, and this nurtured in me an attitude of getting things right on the first shot. I take the same approach when I’m up on the stage.” 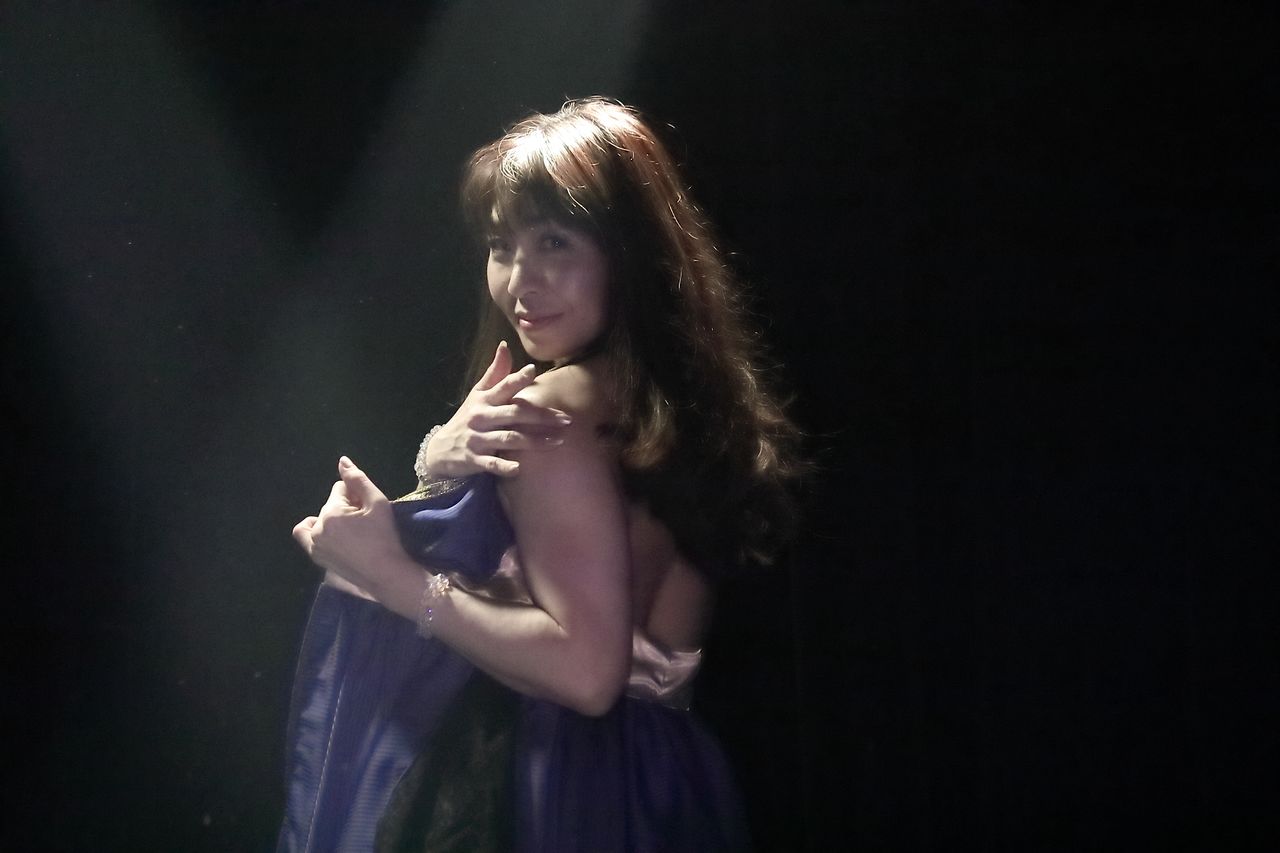 Twenty Years as a Performer

Kōda explains that her stripping work now takes up so much of her time that she has had to turn down film offers. All dancers face similar constraints on their career choices, a situation brought on by clubs requiring a minimum 10-day commitment.

“I consider acting to be my main profession,” declares Kōda. “I’m only in my fifth year as a dancer, but my acting career goes back over twenty-one years.” Although she does not prioritize her strip work, she admits that she enjoys the creative freedom it provides. “You need staff like a director, script writer, and performers to make a movie. But with striptease, once I have an outfit and music ready, all I need to complete the piece is my body. That aspect of the art really interests me.”

Kōda handles all of her own booking. While she must shoulder all the responsibilities of managing her career, she prefers the freedom this gives her in choosing the work she does.

“I never accept jobs unless I want to. I am free to take my career in whatever direction I want. By not tying myself down, if something unexpected comes along, I can just catch the wave and see where it takes me.”

Kōda has worked hard to get where she is at. Since her days as an office worker, her philosophy has been to embrace her current situation and meet her obligations while also leaving room to follow her whims. 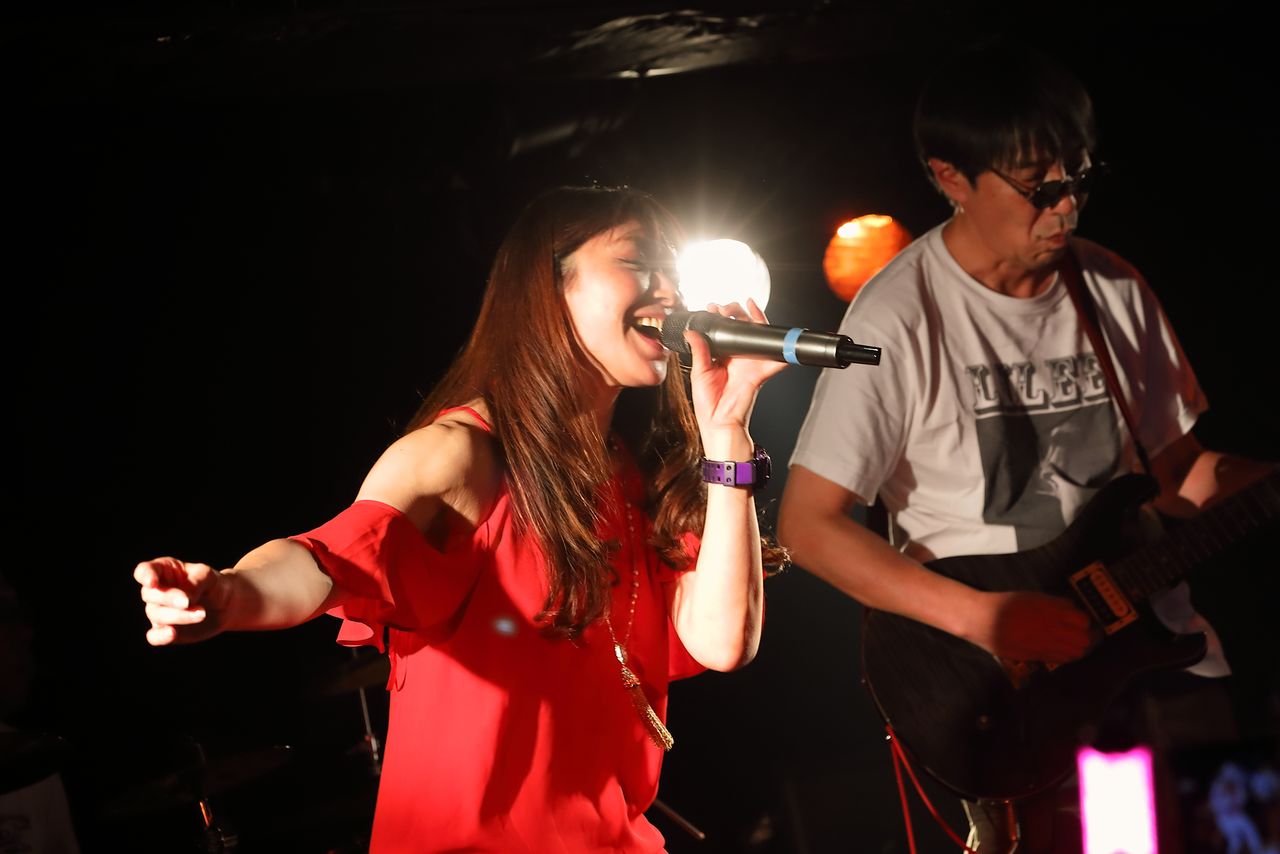 Kōda during a live performance at Yoyogi Barbara in Tokyo in December 2018.

“I never planned to become famous, to be an adult film star, or to appear on television. I’ve probably been able to do what I have because I didn’t start out with any particular goal in mind. To endure in any field, I think it’s important to pragmatically assess what’s required of you in any particular situation.”

Kōda has built her career on her sexual appeal, but she has developed a very practical approach to nudity: “When a famous actress does a nude scene, people praise her for putting everything into the role. But there is nothing particularly commendable about removing your clothes if that is what the part calls for. I take off my clothes because I need to, and because there are things that I can only express through nudity. Stripping is not just smiling, dancing, and getting naked. I express myself in the way I remove my clothes and in the moves I make. There’s unimaginable freedom that you can’t find with other genres of dance. By performing in the nude, I’m able to connect directly with the emotions of viewers.” 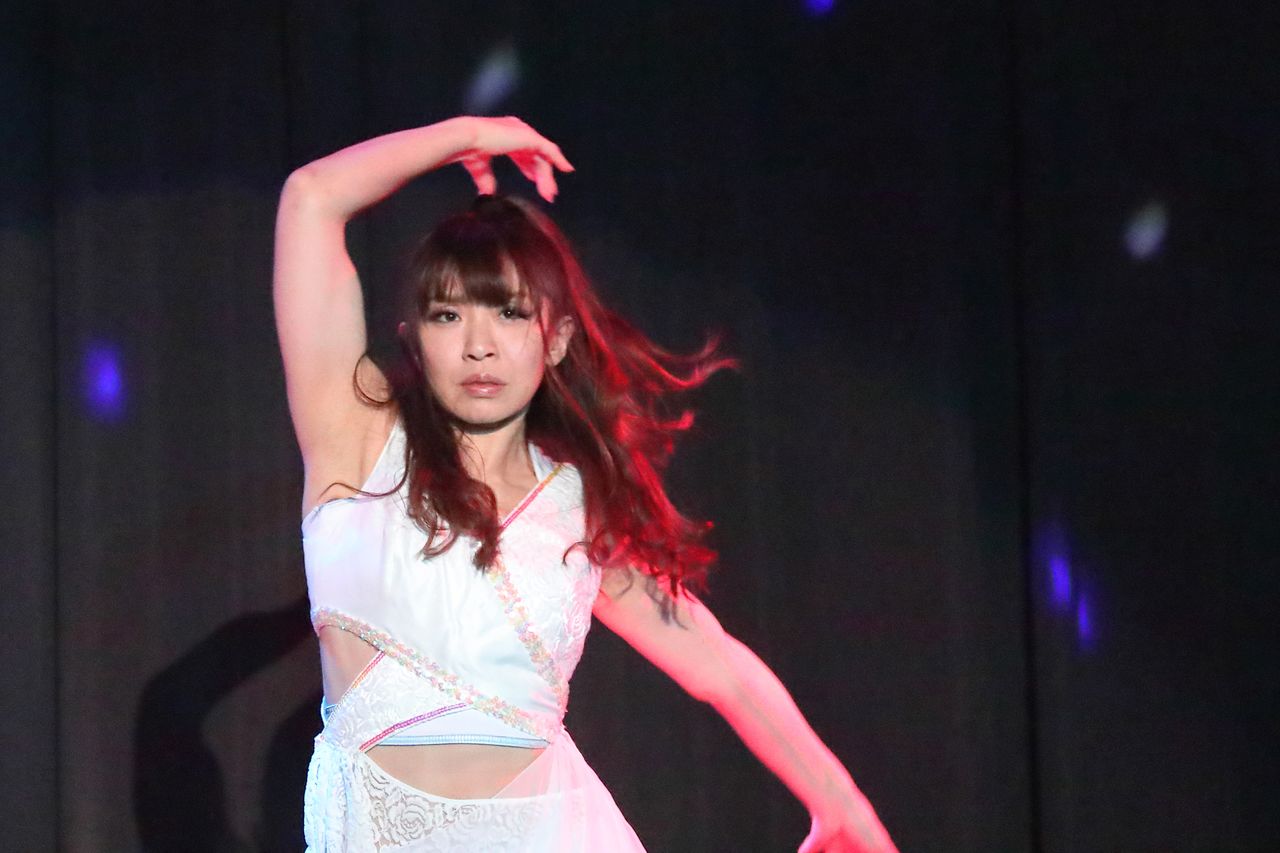 Kōda distinguishes herself from many other strippers who focus solely on appearing as attractive as possible. “With me, even if the form is not especially beautiful, it's enough that the performance is unique,” she explains. “I strike powerful poses in an attempt to communicate the feelings rising within me at that moment. I’m pleased if someone says my performance made them happy, or empowered them,” adding with a laugh, “and if a person has their feeling aroused in other ways, better still.” 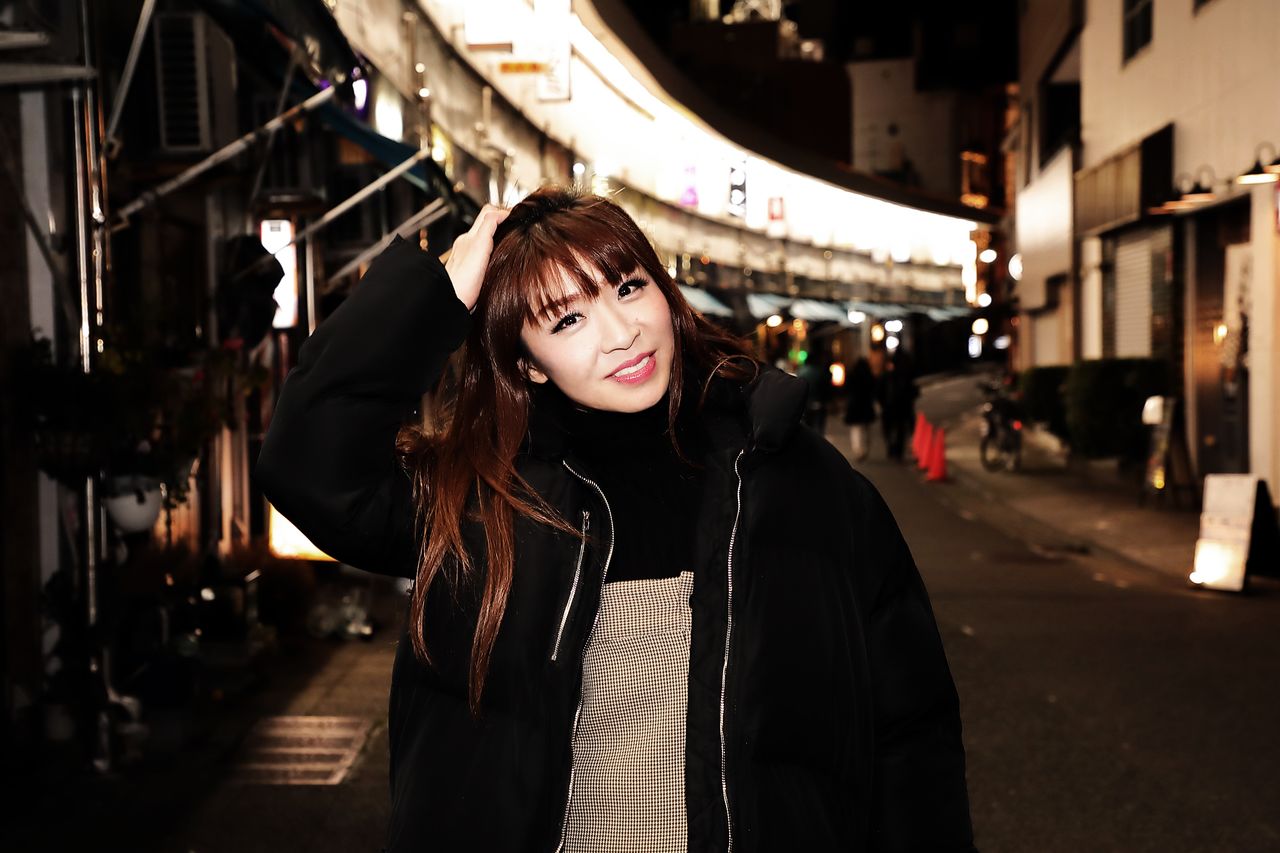