A Soccer Hero Adored Around the World

Culture Oct 18, 2011
The manga and anime series Captain Tsubasa ignited a soccer boom in Japan, has been aired in countries across the globe, and made an impact on many soccer greats. Author Takahashi Yōichi discusses how Tsubasa came into being and the secrets behind the international popularity of Japan’s pop culture. 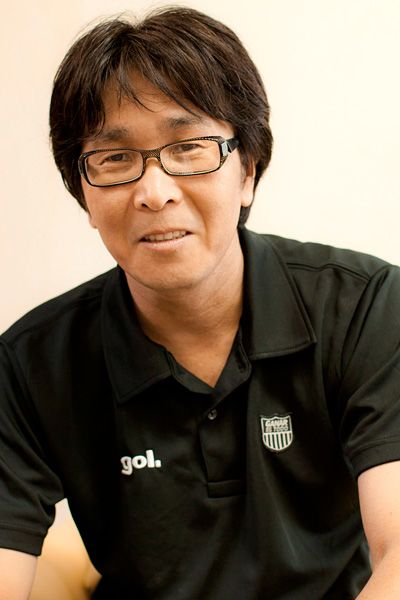 Takahashi Yōichi
Born in Tokyo in 1960. Made his debut as a manga artist with a single-episode manga, “Captain Tsubasa,” which appeared in Weekly Shōnen Jump in 1980. Started a series of the same title in the magazine in 1981. The animated version, launched in 1983, touched off a soccer boom and a surge in the number of young players in Japan. The anime went on to be aired internationally, winning the hearts of fans worldwide and even having an impact on foreign viewers who would go on to be soccer greats. The series continues to depict the growth of the protagonist, Tsubasa.

Takahashi Yōichi is the creator of Captain Tsubasa, a manga and anime series beloved the world over.

Tsubasa's emergence gave rise to a soccer boom in Japan, accelerating the development of the sport. Tsubasa is also said to have inspired famous soccer players all around the world—such as Argentina's Lionel Andrés Messi, France's Zinedine Yazid Zidane, Italy's Alessandro Del Piero, and Spain's Fernando José Torres Sanz—as they honed their skills. More recently, Takahashi created a female character, Kaede, in support of the Japanese women's national soccer team, contributing in his own way to the team's brilliant victory in the FIFA Women's World Cup Germany 2011.

Takahashi discusses how Tsubasa was born, his thoughts on soccer, and his joy over the women's World Cup title. He also offers a shrewd analysis of why Japanese pop culture is well-loved around the world.

It All Began with the Argentina World Cup

INTERVIEWER: For starters, tell us what made you decide to become a manga artist.

TAKAHASHI YŌICHI: I loved drawing as a child, but like other ordinary Japanese children, I also dreamed of becoming a baseball player. As I grew up, though, I gave up on that idea. I then thought that I'd try my luck with drawing, my other passion. That's how it started. I've loved reading manga since elementary school, and in those days I used to read Kyojin no Hoshi [Star of the Giants] and Ashita no Jō [Tomorrow's Joe]. During middle school I was into baseball manga, such as Dokaben and Captain, partly because I played baseball myself. These titles are all sports manga, but I also read many works by Tezuka Osamu and Fujiko Fujio.

INTERVIEWER: Why did you take soccer as your theme rather than baseball, which was at the height of its popularity in Japan at the time?

TAKAHASHI: In my third year of high school, I saw the [1978] FIFA World Cup in Argentina on television and discovered the excitement of the sport. My curiosity piqued, I did some research into soccer. I learned that in Europe, soccer was far more popular than baseball, and the number of soccer players was much greater. Soccer was the world's number one sport, I realized. Baseball was actually among the subjects I dealt with when I first started writing manga, but there were tons of baseball manga out there at the time. So I thought I might as well go with soccer, a mostly unexplored sport.

INTERVIEWER: Not many Japanese in those days were aware of soccer as a world-class sport, were they?

TAKAHASHI: No. When the series had just started, even “World Cup” was an unfamiliar term. So I had to go around explaining in Captain Tsubasa that the World Cup is such and such an event, that it's the world's greatest tournament, held every four years.

INTERVIEWER: Last year marked the thirtieth anniversary of Captain Tsubasa. Japanese soccer has made remarkable strides in that interval, and both soccer fans and those in soccer circles admit that this progress would not have been possible without the series. What is your take on this?

TAKAHASHI: I think it isn't so much the influence of Captain Tsubasa as it is the appeal of soccer itself that has led to the wide acceptance that the sport enjoys today. But I'm grateful that people say so, and it honestly pleases me to think that I may have been able to give a boost to Japanese soccer to some degree. 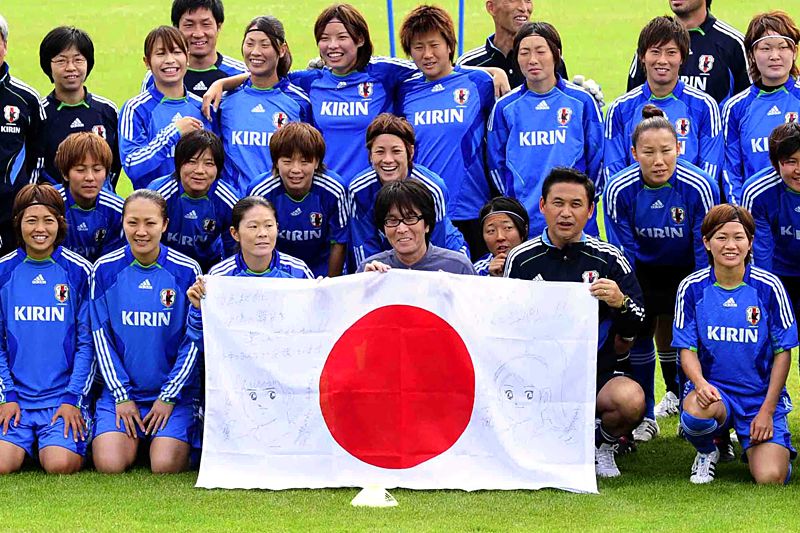 INTERVIEWER: In July 2011, Nadeshiko Japan [as the women’s national soccer team is known] won its first FIFA Women’s World Cup title in Germany. You’ve always supported women’s soccer, through your creation of Kaede for the national team, for instance. What was it like going to the stadium for the final game and witnessing Nadeshiko Japan’s feat with your own eyes?

TAKAHASHI: Before the start of the championship, I honestly didn’t think Nadeshiko Japan was capable of winning the World Cup. So making it to the final was impressive enough. The stadium where the match was held was full of American supporters, and it felt very much like an away game. As I looked on, I wondered how well the women would be able to fare against a team it had never defeated. The Kaede project itself was planned for a somewhat longer timeframe, with our sights set on the London Olympics, so the truth is that I was in disbelief when the team came out the champion. Above all, it’s simply fantastic that the victory came after catching up twice to America’s lead, playing a full 120 minutes, and triumphing in the penalty shootout.

INTERVIEWER: Captain Sawa Homare, on whom the character Kaede is based, led the team throughout the tournament and earned the top scorer and most valuable player titles. What are your thoughts on Sawa’s performance in the World Cup? 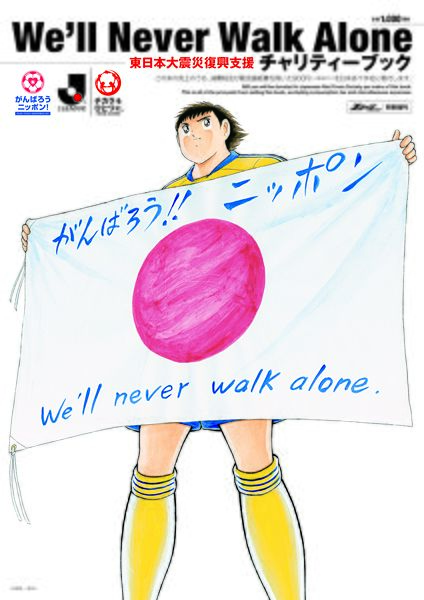 Takahashi is active in efforts to support recovery from the disaster of March 11, 2011. He donated to a charity auction the original of an illustration that he drew for the cover of a charity book, fetching a high price. (Photo: We’ll Never Walk Alone, From One Co.)
© Takahashi Yōichi/Shūeisha

TAKAHASHI: When watching matches of the men’s national soccer team, I usually think, “That player seems like a Tsubasa,” “He reminds me of Hyūga,” and so forth. This time around, I felt that Sawa was the very personification of the Tsubasa that I’ve been depicting. She played as captain wearing the number 10, led the team to World Cup victory, and also became the top scorer and MVP. Through all these years of watching soccer, I always wondered who would become the real-life Tsubasa. But I never imagined that it would turn out to be a woman. And Sawa is all the more Tsubasa-like in that her love for soccer and her joy of kicking the ball with her teammates shines through in her expression and remarks.

INTERVIEWER: The never-give-up spirit that Sawa and the other members of Nadeshiko Japan demonstrated gave tremendous encourage to the Japanese people devastated by the Great East Japan Earthquake.

TAKAHASHI: I absolutely agree. The World Cup victory was won by putting up a tenacious fight against a succession of higher-ranking teams. Coming as it did in the wake of the disaster, I think the team’s performance greatly encouraged the affected people in the devastated areas and elsewhere. The players’ feat was definitely worthy of the People’s Honor Award. 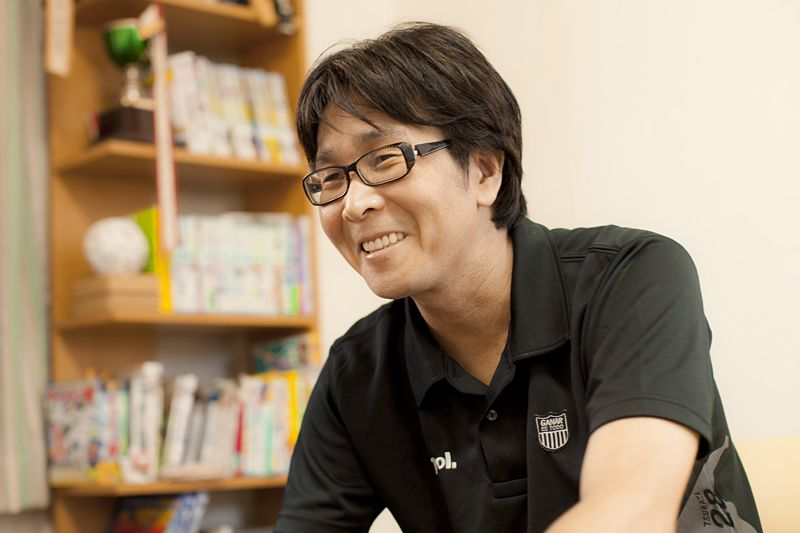 Why Japanese Manga and Anime Are Loved Worldwide 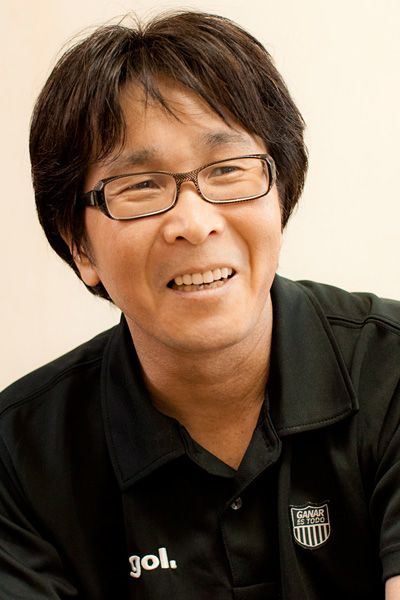 INTERVIEWER: Captain Tsubasa has gone beyond Japanese shores and is adored by people all over the world. In a similar fashion, many Japanese manga and anime are captivating international audiences. What is it about Japan’s manga culture that attracts readers worldwide?

TAKAHASHI: I think one big factor is that Japan has an environment conducive to the growth of high-quality story manga. The world’s first story manga [manga of certain lengths with distinct story lines, which comprise the majority of manga exported today] probably was the work of Tezuka Osamu, and the Japanese-born genre took giant leaps forward after gaining outlets in the form of manga magazines. Initially published monthly, these magazines eventually turned into weeklies, obliging the authors to continue writing about twenty pages every week. I believe that the emergence of numerous weekly manga magazines and their public acceptance are what allowed Japanese manga culture to take hold. The Weekly Shōnen Jump magazine, for instance, had a circulation of over five million in its prime. If you have that many people reading manga, it’s to be expected that readers will emerge who want to write their own manga. This system, I suspect, is uniquely Japanese, and I think it’s thanks to this environment that Japan has been able to create quality manga and anime.

INTERVIEWER: That system led to an increase in the number of competitors and to an environment in which they have many opportunities to receive a greater spotlight—big games, if you will.

TAKAHASHI: Yes, I’d say so. To add to that, the nationwide understanding of manga culture has brought about an environment in which the mere fact of being born Japanese gives a strong edge to aspiring manga artists. In the world of soccer today, Spanish people have the benefit of being born to a country home to La Liga, the world’s top league, and a superior training system. Likewise, Japan has a large number of manga weeklies, and, if you want to, you can start writing manga at a serious level from elementary-school age. These conditions can’t be found in any other country. With regard to anime as well, there’s no question that Japan is home to a highly privileged environment. 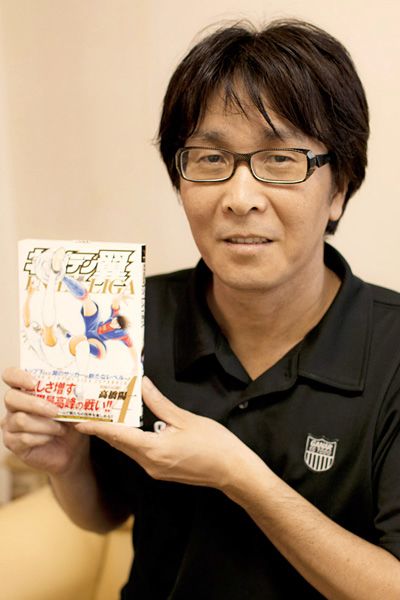 INTERVIEWER: In closing, tell us about where Captain Tsubasa is headed from here.

TAKAHASHI: Tsubasa’s dream of leading Japan to World Cup victory and becoming the world’s best soccer player has remained unchanged since his childhood. So he’ll be working toward that dream. As of now, Tsubasa is only just completing his first season at FC Barcelona. First I need to finish up that segment, and then I’ll write about the Olympics, which is another plot that I’ve been developing at the same time. After that, ultimately, I’d like to get Tsubasa to the World Cup.

INTERVIEWER: You still have a long way to go.

TAKAHASHI: Very. [Laughs wryly] I myself am hoping to see Tsubasa realize his dream of winning the World Cup while I’m alive, while I’m capable of writing manga. I’d like to keep going as long as I have the strength and energy.

(Translated from an interview in Japanese.)