Lasting Popularity for a Tough Watch

Economy Culture Oct 3, 2011
Nearly three decades after the 1983 launch of the G-Shock series, Casio has put its watches on wrists in the world’s mountains, seas, skies, and streets. By pairing functional durability with awareness of youth culture and fashion, G-Shock’s creators have achieved a lasting hit series.

It was 28 years ago that Casio Computer Co., Ltd. launched its G-Shock series of durable, water-resistant watches. The genesis of G-Shock was the idea of designer Ibe Kikuo to create watches that would not break when dropped. In 1983 Ibe formed Project Team Tough, an eight-member unit within Casio, with the aim of achieving a “triple 10” watch: one that could survive a 10-meter free fall, that was water resistant to 10 bars, and whose battery would last for 10 years.

The team did not have smooth sailing at first. Ibe’s testing procedures included him leaning out of a bathroom window on the third floor of an out-of-the-way Casio building, away from prying eyes, to drop prototypes onto the pavement below. Despite going through more than a hundred test models, he was no closer to a successful design. 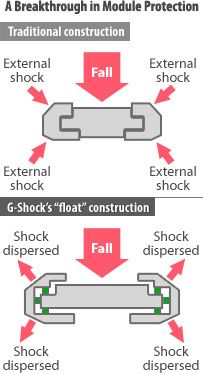 It was the sight of a child playing with a rubber ball that gave him the breakthrough hint he needed. He saw the possibility of encasing the module—the internal case housing the functional parts of the watch—in a cushion like the rubber ball, allowing it to float in a substance that would absorb the impact of external blows. Until then he and his team had focused on protecting the module with rigid armor, but now he had a new solution: the module would be supported at a limited number of points, suspended in an empty space in the watch housing. This “float” construction would become the fundamental structure of G-Shock watches for decades to come.

In 1983 the debut G-Shock model, the DW-5000C-1A, hit store shelves. (See photo 1 in the timeline. All model numbers are for Japan market releases.)

In Casio’s home market of Japan, early 1980s consumers were interested mainly in thin, dressy watches; the digital G-Shock’s rugged, sturdy appearance won it few Japanese fans, and sales were sluggish. It was in the US market that the G-Shock made its first real splash, kicked off by a television commercial showing the watch bring slapped across an ice rink in place of a hockey puck.

Casio’s American office aired this commercial to show consumers the watch’s toughness, but the initial response was disbelief. The firm was swamped with phone calls from people accusing it of false advertising, and soon a news program was organizing special tests to see whether the watch could really stand up to such abuse. A hockey player smashed the watch across the ice with his stick. When the camera focused on the watch once it came to rest, it showed the unharmed display still counting the seconds. The G-Shock had made its name as a timepiece that could take serious abuse. Its growing success in the US market eventually prompted Japanese consumers to take a fresh look at the tough Casio watch.

“In the 1990s, our models like the muscular, rugged DW-6000GJ-1 [photo 2 in the timeline] gained new fans in the skateboarding community,” says Saitō Shinji, a product planner in Casio’s Timepiece Product Division. “They saw the shock- and water-resistance and the tough styling as a perfect match for their activities. This opened the way for the G-Shock line to build more presence in youth-culture fields like fashion and music.” Casio’s watches would go on to make appearances in music videos by artists like Coldplay and Eminem and on Keanu Reeves’s wrist in the movie Speed.

In the 1990s, as G-Shock entered its second decade, the Casio team began working on new “professional use” lines. Building on the watches’ hallmark shock-resistance, new features were added to let them stand up to even harsher treatment. In 1993 the MAN series hit store shelves, with specialized models for use by divers, pilots, and racing mechanics. (See photo 3 in the timeline.) Further enhancements to the functionality of these models produced the Master of G series, which is sold to this day.

In 1994, the tiny bulb used to illuminate the watch face in dark conditions was replaced by an electroluminescent element, and EL backlighting made its way into the G-Shock lineup, vastly improving the watches’ usefulness after dusk. Further advances included the application of a special film called a “spacer” to the liquid crystal display so that each flash of the backlight would cause an ordinarily transparent graphic—such as a whale or a devil—to appear. Even this sort of purely playful addition to the feature list helped to increase G-Shock popularity among watch wearers.

In December 1994, Casio reached out to women consumers with the brand-new Baby-G series. The slimmer profile and compact styling did not detract from the watches’ durability, and these models were soon an integral part of the Casio product lineup.

Staying on the Cutting Edge

The G-Shock development team never rested for long. There were always new technologies to work into the newest models. In 2002 Casio released “The G,” a groundbreaking watch featuring both a solar charging unit to top up the battery with solar or fluorescent light and a calibration signal receiver to maintain an accurate time. (See photo 5 in the timeline.) The latter feature has now been polished into a 6-band receiver that can receive calibration signals from six transmission stations worldwide: two in Japan, two in Europe, and one each in North America and China. 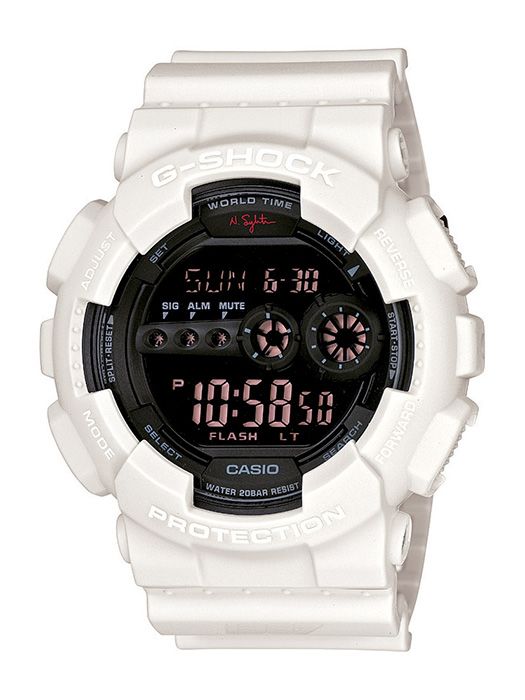 But shoppers do not select watches for their technical features alone. Casio’s G-Shock team also turned their attention to the watch as a fashion item: something younger people wore as an accessory, not merely a functional timepiece. Pink and other bright, unorthodox colors made their appearance in the lineup, and a new wave of watch wearers began looking to this series as fashion accouterments—no small accomplishment for Casio in an era when young people were said to be losing interest in the wristwatch in general. Over time, these buyers came to appreciate the functional aspects of their watches as well. Adventurous collaborations with youth-oriented fashion brands like BlackFlys and Stussy, artists, athletes, and pop designers made their way into the lineup, attracting fresh attention.

Saitō notes, though, that none of this came at the expense of the fundamental qualities of the G-Shock series: durability, ruggedness, and water-resistance. “Our product lineup was growing rapidly, but there were always areas of the G-Shock tradition that we held on to tightly. I think we managed to evolve the brand over time without leaving that tradition behind.”

Nearly 30 years since the release of its first G-Shock watch, Casio has produced a full range of models for customers in every demographic and made the brand one of the best-known names in field of casual and athletic timepieces. More than 2,000 models in all, not including color variations, have hit markets around the world. The timepieces are now on sale in 96 countries and cumulative sales surpassed 50 million in 2009.

Sales today are on an upward course in the home market of Japan, and appear likely to surpass even the G-Shock’s boom years of the 1990s. Ibe Kikuo, father of the G-Shock’s antishock construction, remains deeply involved in marketing as well as development, frequently taking part in the “Shock the World” tour and making appearances in cities like London and New York to extol the qualities of the watches—and even to smash them into a wall from time to time, to show they can still take abuse. 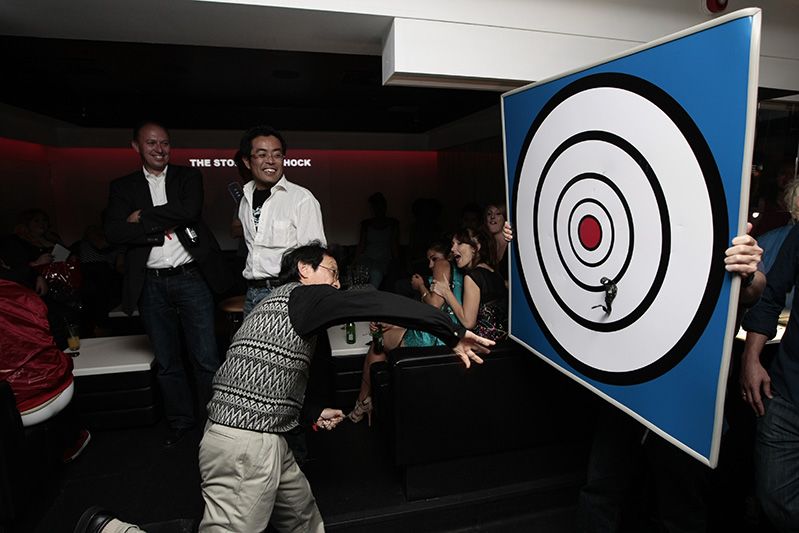 Ibe demonstrates the G-Shock toughness at a 2009 event in London.

Long popular in the established watch markets of Japan, North America, and Europe, the G-Shock lineup is making rapid headway in emerging economies today. The rising number of fans in Latin America and Southeast Asia should soon be joined by wearers in China and the Middle East, two key growth markets Casio has set its sights on. The toughest watches in the world are on course to be among the world’s most popular wristwatches, thanks to the ingenuity and technical innovation that has kept them at the industry’s leading edge.

Explore the photos below to see the G-Shock models on the market in Japan today. 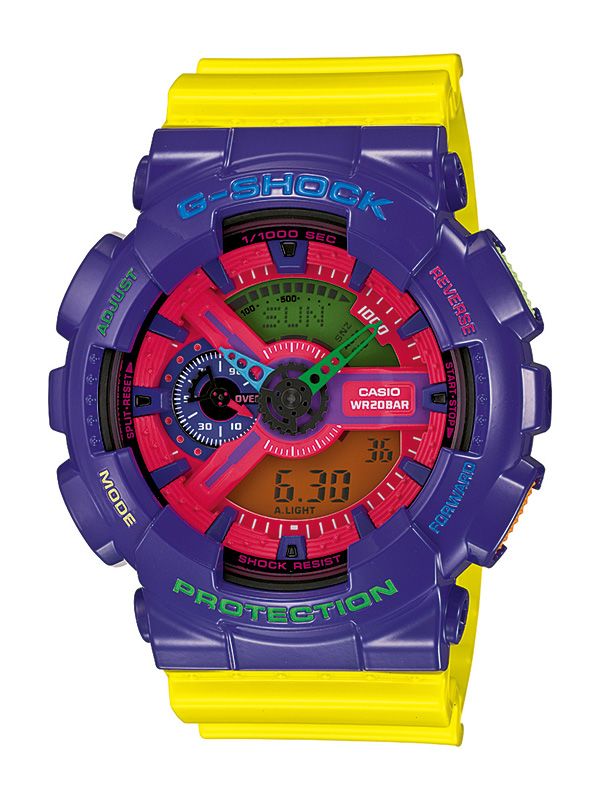 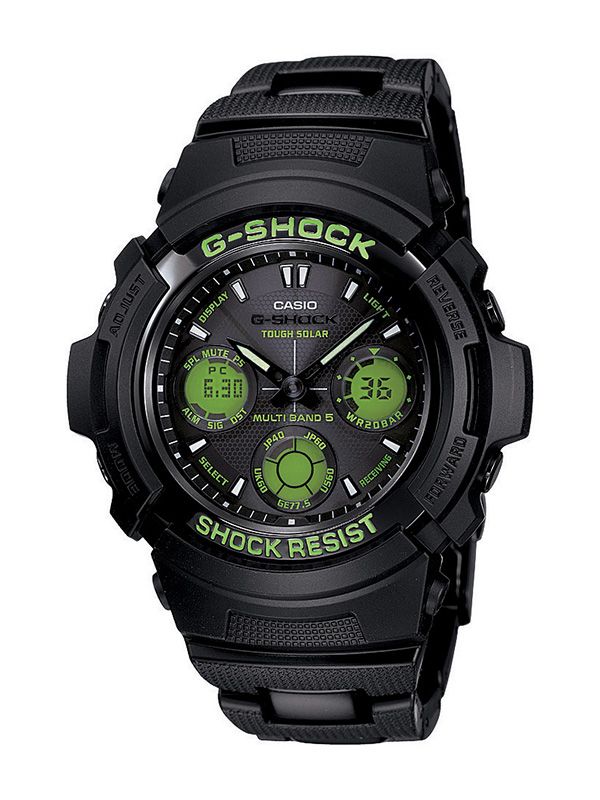 Analog and digital timekeeping combined in the AWG-100FC-1AJF. 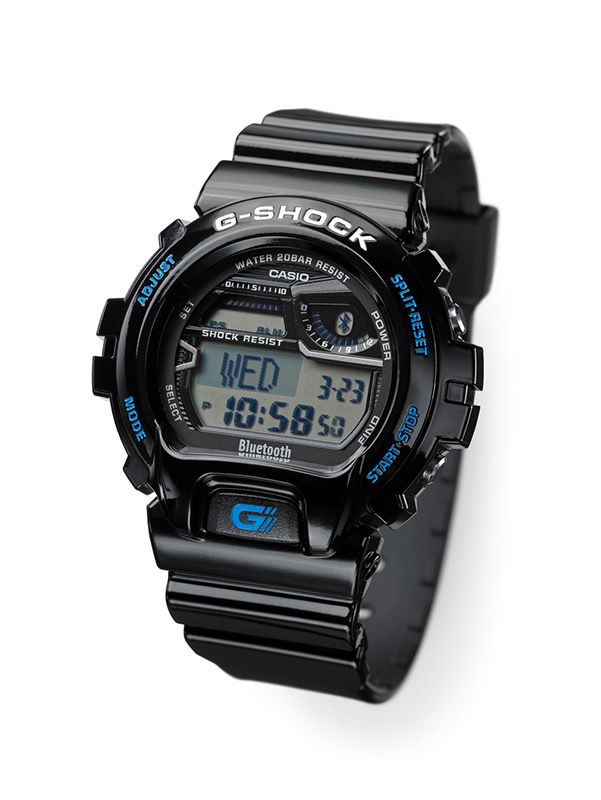 The GB-6900 premiered at the 2011 Baselworld watch and jewelry show. Bluetooth connects it to your smartphone. 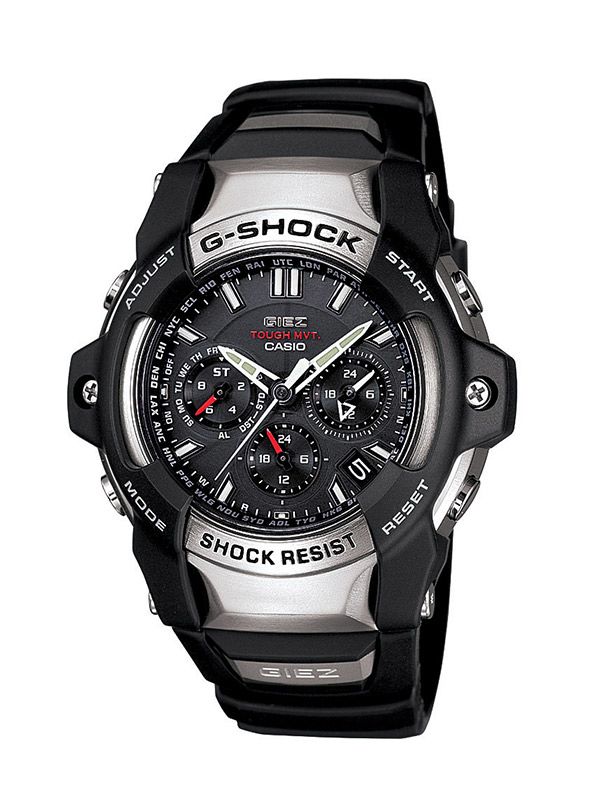 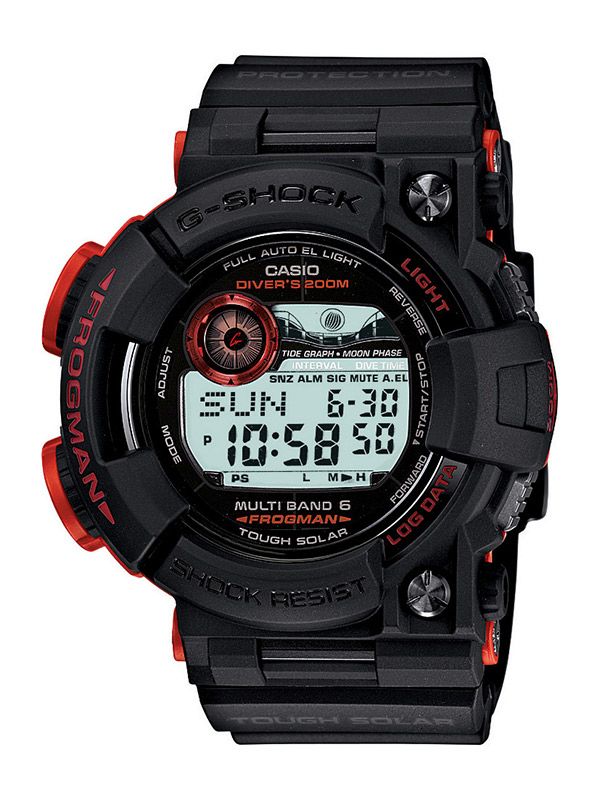 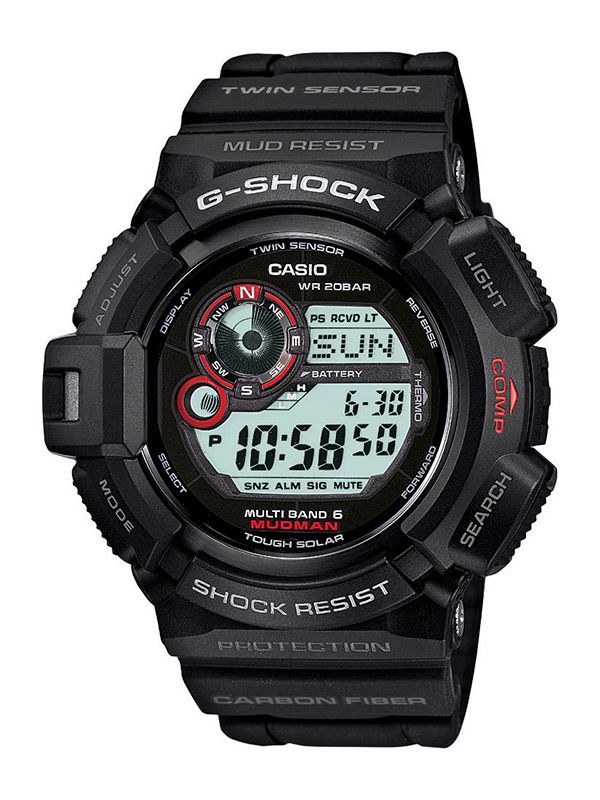 The “Master of G” GW-9300-1JF Mudman provides temperature and direction sensing and moon-phase functions in a mud-resistant body. 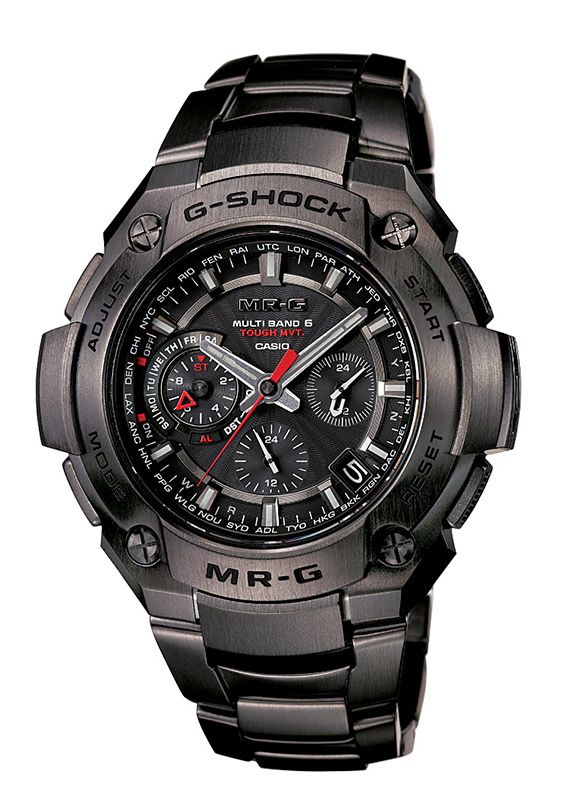 The top-of-the-line MRG-8100B-1AJF is crafted with carefully selected materials. 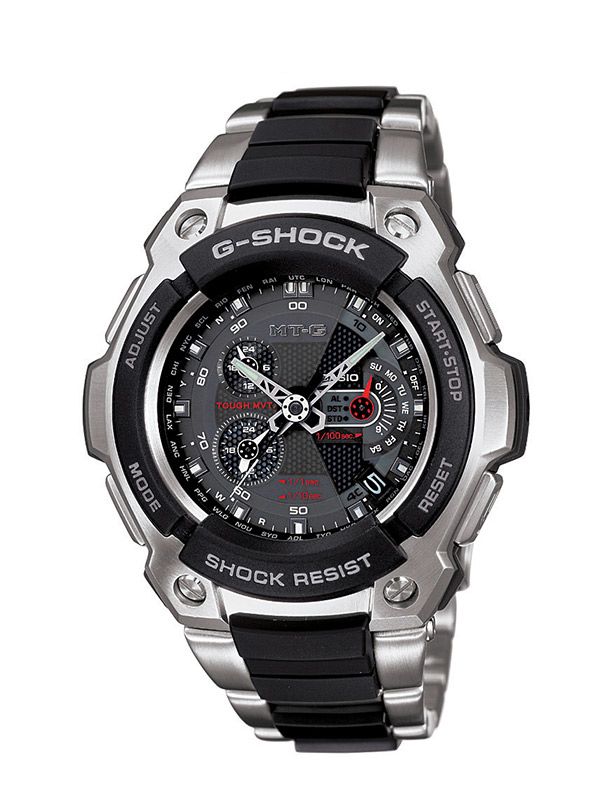 The twin-body construction of the MTG-1100-1AJF combines metal and rubber in a bold profile. 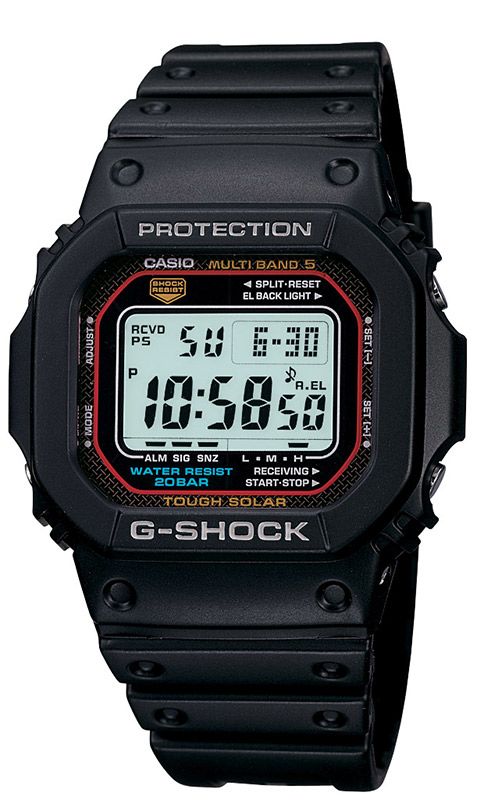