Culture Jan 7, 2013
Every summer France hosts the Japan Expo to showcase Japanese pop culture. In 2012, the martial-arts manga artist Saruwatari Tetsuya attended the event. In this article, we spotlight his visit.

The thirteenth Japan Expo was held in Villepinte, Paris, on July 5–8, 2012. This year the number of participants broke through the 200,000 mark, again demonstrating how popular Japanese pop culture has become. A wide array of guests were on hand—from manga artists and video-game producers, to rock bands and idol groups—and the venue was heaving with the crowds day after day.

Among the array of distinguished guests, the manga artist Saruwatari Tetsuya attracted a particularly warm welcome. He has gained fame outside Japan for his drawings that capture the spirit of the martial arts, proving that the appeal of Japanese pop culture extends beyond the cute and cuddly. His appearance at the event showed how passionate some French people are for the martial arts.

Martial Arts at the Japan Expo

Martial arts and combat sports are a centerpiece of the Japan Expo every year. This year, a 2,000-square-meter space was dedicated to seven disciplines, with attendees taking part and practicing in an open area. The disciplines were karate (unarmed combat using blows and kicks), shōrinji kenpō (similar to kung fu), ninjutsu (stealth and guerrilla combat), aikidō (self-defense incorporating holds and locks), naginata (combat with long swords), kendō (fencing with bamboo swords), and kyūdō (archery). Over the four-day event, around 2,000 people took part in training of some kind.

Sébastien Kitoko (photo on the right), is a third dan (grade) in shōrinji kenpō and former student of Aosaka Hiroshi, who opened the first dōjō (training ground) for that discipline in France. “We can interact with people here at the Japan Expo who we wouldn’t normally have the opportunity to meet, with no experience in the martial arts. Many of them have seen some techniques or kata [choreographed movement sequences] in manga and are interested in seeing what it’s like in reality.”

“Many of the people who come along are fans of Naruto,” adds Philippe Barthélémy, a pioneer of ninjutsu in Europe. He says that people of all ages—not just the young—wanted to give that martial art a try. 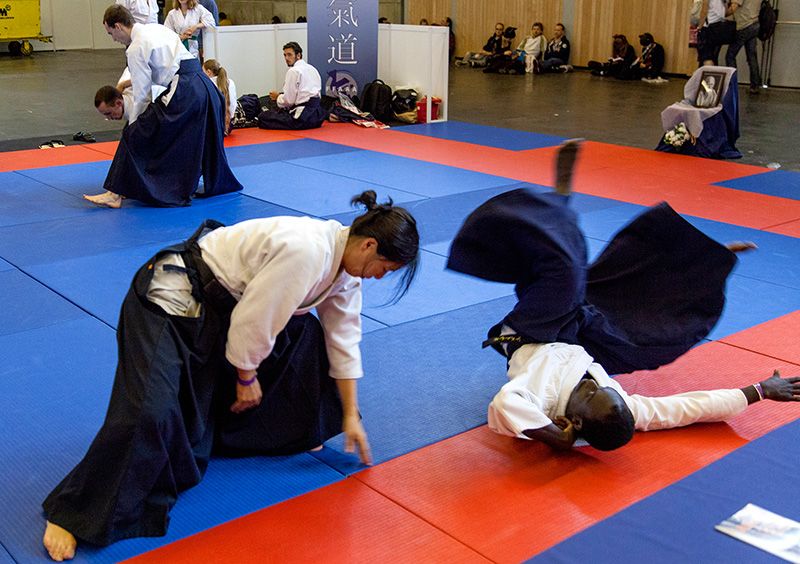 The success of the event is not surprising when you consider how deeply martial arts have become a part of French society. Today over 550,000 people in France practice jūdō and 200,000 practice karate—and these numbers continued to increase year on year.

Barthélémy points out, though, that, “Westerners often focus too much on improving their technique through constant practice, and overlook the spiritual and mental value of martial arts.”

It is on this point that Japanese manga can fulfill an important role. These works do not just look at the techniques and the physical side of martial arts; they also address philosophical and mental issues.

Combat sports and manga were brought together at Japan Expo for the Free Fight Event (photo above). The event’s name is borrowed from a popular manga of Saruwatari Tetsuya, which is titled Free Fight in French (Tough is the original title). Exhibition matches were held in a ring set up for the event and Saruwatari was on hand to sign autographs (photo below).

“It’s like a different world for me,” Saruwatari said as he looked out at all of the French fans who had gathered at the expo out of an interest in fantasy stories and cute characters. “The ‘pop’ aspect is totally foreign to me. Of course, I’d love to be able to create manga that appeal to this crowd and it would be great to have more female readers,” he joked. 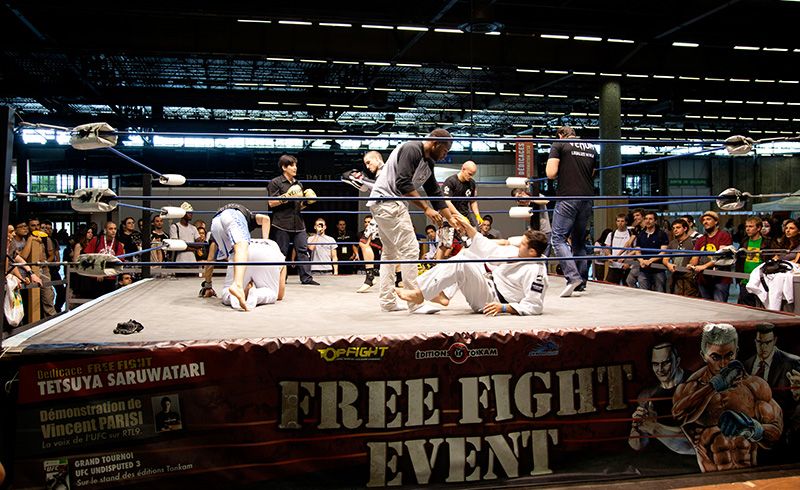 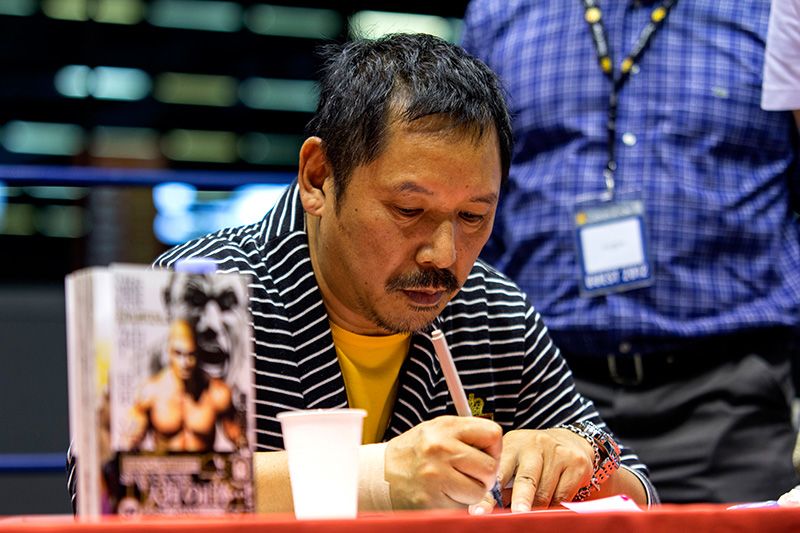 After three decades creating manga, the 54-year-old Saruwatari has an artistic vitality that commands respect. Until relatively recently he worked on two series at the same time and was producing 120 pages a month. “I’ve never failed to meet a deadline. This is the one thing that I can say I’m really proud of. In my younger days I wanted to work on several pieces at once and there were times when I was producing over 300 pages a month. It took its toll, though, and I lost a lot of hair. [Laughs]”

Saruwatari entered the manga industry at the start of the 1980s, after graduating from high school, and picked up almost all his skills on the job. He began as an assistant to Hiramatsu Shinji, and went independent after that. In the late 1980s, he gained recognition for such titles as Dog Soldier, Riki-Oh, and Bounty Hunter: The Hard. All of them were action-packed stories featuring powerfully built fighters. 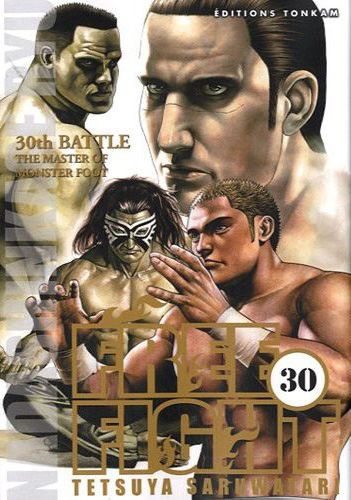 Then, in the early 1990s, Saruwatari released Kōkō tekkenden tafu (Iron Fisted High School Legend: Tough), which catapulted him into the limelight. The story centers on a high school student, Miyazawa Kiichi, born into a family that practices an ancient and powerful martial art called nadashinkage-ryū. Miyazawa strives to become strong and tests his skills against numerous opponents.

Saruwatari’s passion for martial arts, particularly mixed martial arts, has shone through over the nearly 20 years of producing Kōkō tekkenden tafu and its sequel Tough. This year marks a special occasion as the curtain finally fell on this long-standing series, with the last issue published on July 19, 2012.

Saruwatari spent over 20 years frequenting martial arts training sessions and matches, becoming friends with top-class fighters and sports journalists. The realistic depictions of martial arts in his manga are the result of his total absorption in that world. He says that at times he invited fighters to his workplace to see complicated moves and holds performed first hand so that he could depict the scenes with greater accuracy.

The Philosophy Behind Martial Arts

“I work from three in the afternoon until seven the next morning. While awake I’m almost continually drawing,” Saruwatari explains. The characters that he constructs are supermen with beliefs deeply ingrained in the honorable code of bushidō (“way of the samurai”). His stories constantly ask the question: “What does it mean to live as a man?” Saruwatari is not the first to create manga reflecting these themes; indeed, he is preceded by masters such as Hiramatsu Shinji and Motomiya Hiroshi.

Saruwatari’s works are not only about the techniques and skills of martial arts, however. They also delve deeply into the spirit and philosophy behind the disciplines. The characters in his stories have mental and emotional struggles that always lie behind the physical conflict. Making it possible to overcome those struggles is at the heart of the martial-arts spirit. In between life-or-death contests are important lessons, such as respect for one’s elders, strict adherence to rules, and consideration for others.

“Many years ago I met with a qigong practitioner.(*1) He had a very thorough knowledge of the flow of the body’s spirit and the various pressure points. I learned a great deal from him about the healing powers of martial arts,” Saruwatari recalls. These experiences have passed through to his stories and his artwork, promoting a deeper knowledge of martial-arts culture among his readers.

Even though many manga titles are published in France, there is still only a small number of works that have martial arts themes. In pioneering this genre in France, Saruwatari received a warm welcome among fans there, who encouraged him to keep up his creative endeavors.

(*1) ^ Qigong has its roots in Chinese medicine and martial arts and is the practice of aligning breath, movement, and awareness for exercise, healing, and meditation.