Culture Sep 27, 2016
A recent exhibit at the Parco Museum in Ikebukuro looked at 20 years of creations by manga artist Anno Moyoco. Here's a look at what was on display and an overview of her career.

Up Close and Personal

The exhibit Strip! at the Parco Museum in Ikebukuro was a brilliant showcase for 20 years of Anno Moyoco’s work. The extensive show, which continued through September 26, presented the manga artist’s unique style through displays of frontispieces, famous scenes, and other drawings from some of her best-known creations, including The Diary of Ochibi, Happy Mania, Hataraki Man, Sakuran, and Sugar Sugar Rune.

Visitors immersed themselves in her manga world through stunning original drawings and by reading select works available at the exhibit, which included a short chapter of Sakuran and a scene illustrating the racy tone of the period piece Memoirs of Amorous Gentlemen. 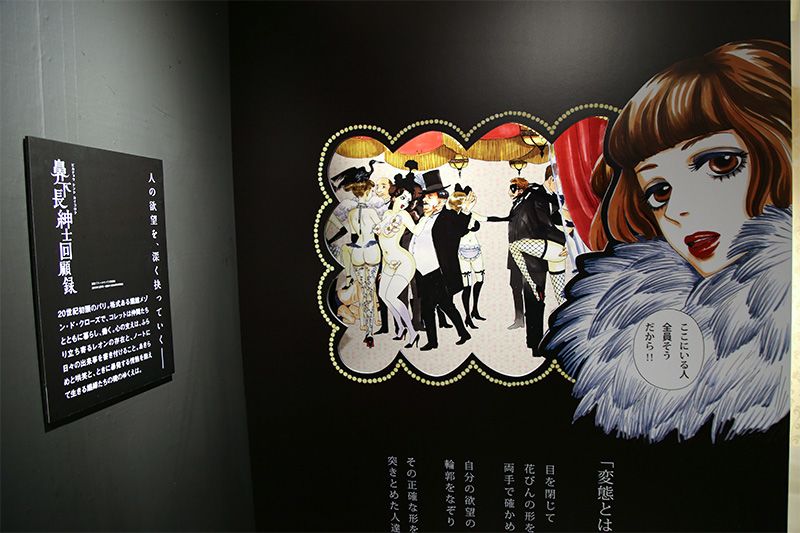 A scene from Memoirs of Amorous Gentlemen (in Japanese, Bikachō shinshi kaikoroku). Set in the early 1900s, the comic tells the story of prostitutes in a Paris brothel and their perverse gentlemen customers.

The section for her early romantic comedy Happy Mania featured panels detailing each of series protagonist Shigetaka Kayoko’s boyfriends, along with several scenes depicting her ill-fated relationships. While compact, the corner succeeded in portraying Shigeta’s questionable judgement in choosing lovers and her laudable determination to find her soul mate. 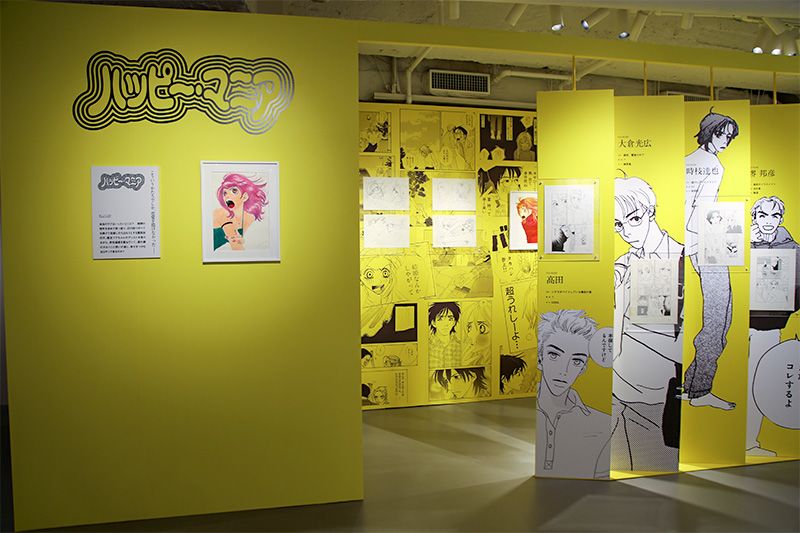 The female characters in Anno’s works are capricious heroines who present both strong and vulnerable traits. They charge headlong through life, approaching work and love with equal zeal. They stubbornly stand their ground against boyfriends and colleagues, but when alone they may endlessly fret over trivial affairs or lapse into an uncontrollable fit of tears. Though they keep their sights firmly on the horizon, they are also frequently the victims of their own caprice.

Take for example the main character of Hataraki Man, Matsukata Hiroko. A hard-working editor at the weekly magazine Jidai, she struggles to strike a balance between her career and personal life. She loves her job and often throws herself into projects with single-minded fervor. But as a single, 28-year-old woman she also struggles to cope with strong social expectations. Her bosses and coworkers are a source of strife and inspiration and her love life is prone to turbulence. The realistic tone Anno chose for Matsukata is a large part of what has made the manga a success, especially among female fans confronting similar issues in their day-to-day lives. 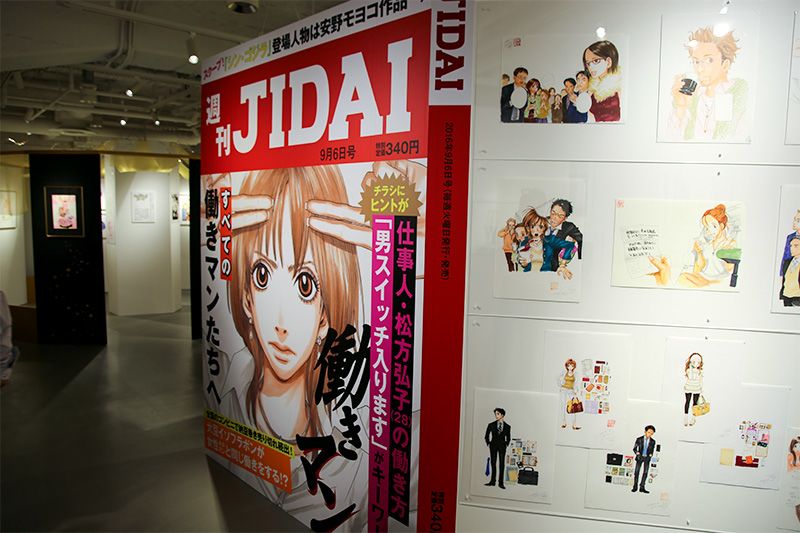 The Hataraki Man area features a large panel designed like a cover of the fictitious weekly magazine Jidai and displays original drawings from the series. Another section takes a peek inside the bags of different characters.

In the period piece Sakuran Anno portrays life in the red-light district of Yoshiwara in Edo (now Tokyo) through the exploits of the young courtesan Kiyoha. Beautiful and strong willed, Kiyoha uses her wits and charms to woo influential patrons and defeat rivals as she tries to reach the most sought-after rank of oiran. In the work Anno skillfully creates her version of Yoshiwara by drawing hairstyles, clothing, and scenery, even down to the woodgrain on pillar, in magnificent detail. This attention to minor elements enhances the already compelling story of the courtesans, who, though young and vibrant, are trapped in a way of life where death is often the only means of escape. 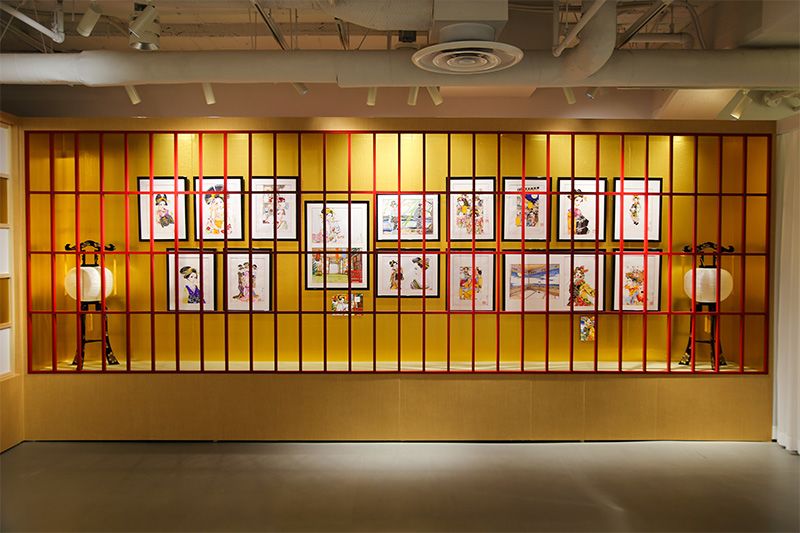 In the Sakuran area original drawing from the series are set behind a harimise, a wooden lattice used in Yoshiwara to display prostitutes.

Born in Tokyo in 1971, Anno first set out to be a manga artist while in the third year of elementary school. She has never looked back. She draws inspiration from the fashion world, filling her works with stylish characters decked out in elegant wear and eye-catching accessories. Her drawings stand out for their careful attention to detail, combining popular fashion and other elements to imbue a specific sense of time.

While many of her best-known creations are aimed at adult and young women, she has also drawn works for younger readers. These include Sugar Sugar Rune, a tale of two witches vying for love in the human world, and The Diary of Ochibi, which amusingly portrays life amid the natural surroundings of Kamakura.

Anno’s style and rich imagination has enabled her to create stories that appeal broadly beyond her largely adolescent readership. She is unusual among mangaka in that her comics not only appear in manga magazines, but are serialized in widely circulated newspapers and news weeklies. She has also branched out into other genres by penning a series of light essays, including one based on life with her husband, the Neon Genesis Evangelion creator and Godzilla Resurgence chief director Anno Hideaki. 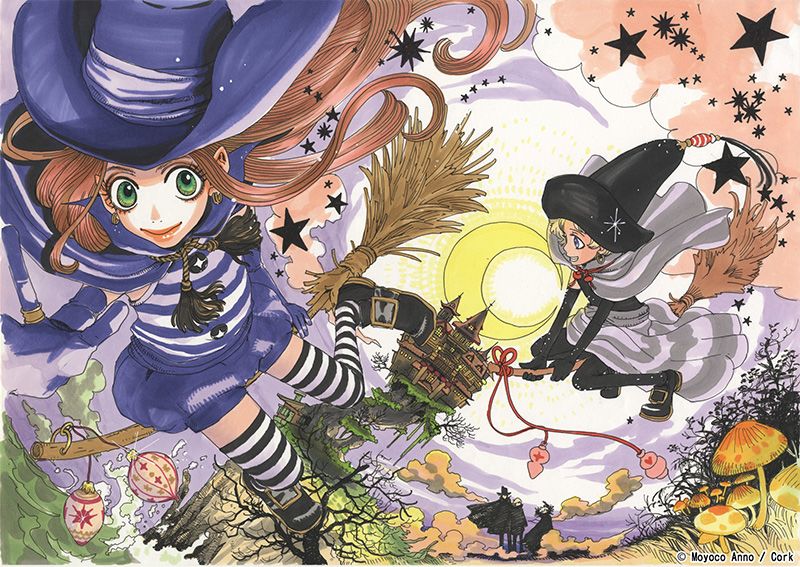 The modish accessories characters wear are one aspect that has made Sugar Sugar Rune a popular series among young readers. 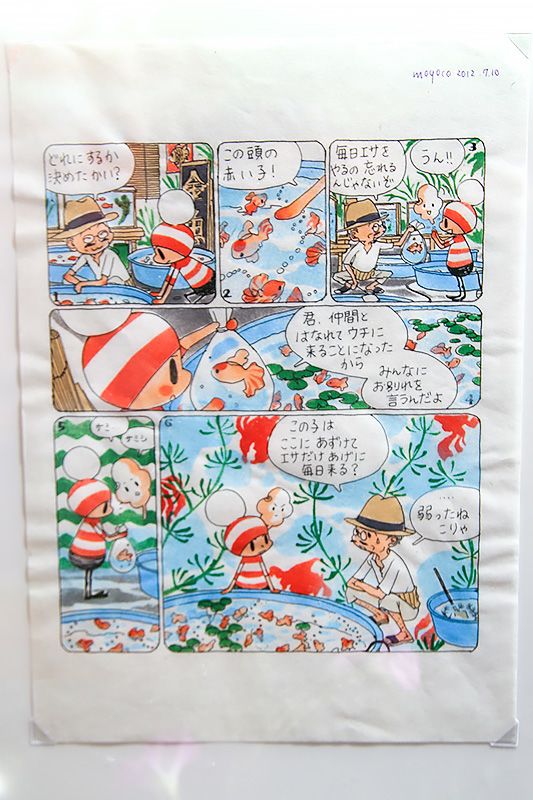 Anno broke from her usual drawing style in creating the series The Diary of Ochibi.

Maintaining such a prolific pace has been a challenge. In 2008 Anno put her various serials on hold, citing health reasons. Like one of her own characters, she was on the verge of burning out after years of running at full bore. The only manga she kept going was the lighthearted Diary of Ochibi, which during her sabbatical served to nurse her back to a healthy emotional state. Anno returned to the manga scene after close to five years, releasing Memoirs of Amorous Gentlemen in 2013.

Fans are excited to see how taking time off will affect Anno’s work. Many anticipate that as she matures as a manga artist and human being she will delve into even more diverse themes.

Fans outside of Japan are also anxious. Anno is hugely popular in Asia and translations of her works are widely available in Taiwan, South Korea, and other countries. Several titles have also appeared in English and other Western languages. And as more are published, the name Anno Moyoco may soon join the ranks of other international manga superstars.