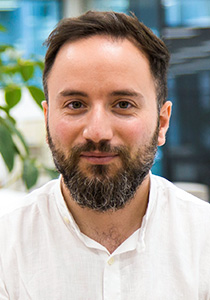 Translator and professor of Japanese language and literature. Born in 1983. Graduated from Sapienza University of Rome in 2007. Received his PhD in 2011 after completing his doctoral thesis on Japanese cellphone novels (keitai shōsetsu). Since 2007, has devoted much of his research to the work of manga artist Kamimura Kazuo (1940–86). Translator of several of Kamimura’s works, including Shurayukihime (Lady Snowblood). Author of Chie la mocciosa di Haruki Etsumi—Introduzione al dialetto di Osaka, a textbook introducing the dialect of Osaka through the manga Jarinko Chie by Haruki Etsumi, and other books.

Kamimura Kazuo (1940–86) has been called “the ukiyo-e master of Shōwa-era manga.” Born in Yokosuka, Kanagawa Prefecture, he graduated from Musashino Art University and took a part-time job with the advertising agency Senkōsha before making his manga debut in 1967 with Kawaiko Sayuri-chan no daraku (The Corruption of Cute Sayuri). Kamimura died of cancer of the pharynx in 1986, at the young age of 45, but his prolific work and unique style have earned him a place in the pantheon of manga artists.

Paolo La Marca is the official translator of Kamimura Kazuo’s manga in Italy and a devoted student of Kamimura’s life and work. He has translated four of Kamimura’s most celebrated works: Shurayukihime (Lady Snowblood), Itezuru (The Frozen Crane; published in Italian as Una gru infreddolita—Storia di una geisha), Shurayukihime–Fukkatsu no shō (Lady Snowblood: Resurrection) and Dōsei jidai (The Years of Cohabitation; published in Italian as L’età della convivenza). La Marca was also the curator of two exhibitions of Kamimura’s work, the first such exhibits outside of Japan.

“What I love best about Kamimura’s manga,” says La Marca, “is the artwork, especially the way he portrays women—not only physically but also psychologically—and the fact that every time I read his manga, I discover something new.”

Perhaps the first thing that a manga reader will notice about Kamimura’s work is its striking layout. “His art flows like a river from one page to another,” says La Marca. “His style is very cinematographic.” In addition, Kamimura devotes tremendous attention to detail. If the characters are eating, for example, he will show the food disappearing from frame to frame.

Kamimura’s style has influenced numerous artists in Japan and elsewhere. Quentin Tarantino is probably the best-known example. “Lady Snowblood was made into a Japanese movie in 1973, which in turn inspired Tarantino’s 2003 Kill Bill,” explains La Marca. “It went from manga to Japanese cinema, and from Japanese cinema to Hollywood.”

Kamimura’s work, almost unknown in Italy until a few years ago, is enjoying a surge in popularity as Italian readers discover that there is more to manga than Dragon Ball and Naruto, action-filled fantasies targeting younger readers. La Marca believes that Kamimura’s work has opened up Europeans to more mature manga.

The Italian first encountered Kamimura’s work in the 1990s, when he was still in high school. In a book by Maria Teresa Orsi—one of the first European academics to write on the subject of Japanese manga—he found a few lines about Dōsei jidai and two illustrations from the series. “I fell in love with those two images, and I instantly wanted to know more about the artist,” he recalls.

But at that time, Internet access in Italy was limited, and there was almost no information available in Western languages. “The first time I came to Japan, in 2006, I went to a bookstore, bought all the volumes of Dōsei jidai, and read them in two days!” recounts La Marca. One year later, as a graduate student, he began to do research on Kamimura Kazuo and his work. In 2012, he contacted Kamimura’s daughter, Migiwa, for an interview that he published in Italian on his blog Una stanza piena di manga (A Room Filled with Manga). They have been good friends ever since.

What makes Kamimura’s retro manga appealing to the Italian public? The romantic and tragic love stories, combined with strong elements of Japanese culture, are part of the charm. But La Marca also points out that Kamimura himself was influenced by classic Italian cinema. “He was a fan of Italian movies like I girasoli [Sunflower; 1970], with Sophia Loren and Marcello Mastroianni. He watched Bernardo Bertolucci’s Last Tango in Paris [1972] when he came to Italy for the first time. He drew a lot of inspiration from the cinema.” Kamimura also made a manga adaptation of Plagio [1969], an Italian film with Mita Medici. In addition, he produced some illustrations inspired by movies, including Il portiere di notte [The Night Porter; 1974] by Liliana Cavani. “For me, it’s a joy to discover these inspirations each time I read his work,” says La Marca. 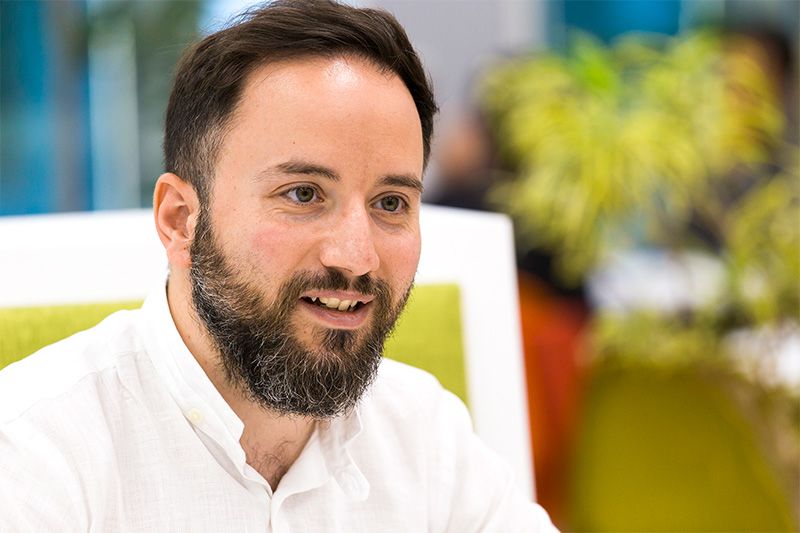 Paolo La Marca during an interview at Nippon.com.

La Marca also notes the resemblance between Kamimura Kazuo’s work and the Italian comic artist Guido Crepax (1933–2003). “They were both trained as illustrators, they both created stories that revolve around women, they both exploited a unique page layout, and they were both strongly influenced by fashion and the cinema.” During one of La Marca’s first visits to Kamimura’s former residence, he spotted a book by the Italian artist in Kamimura’s personal library. “Crepax would have admired Kamimura’s work, too, if he’d had the opportunity to read it,” he says. 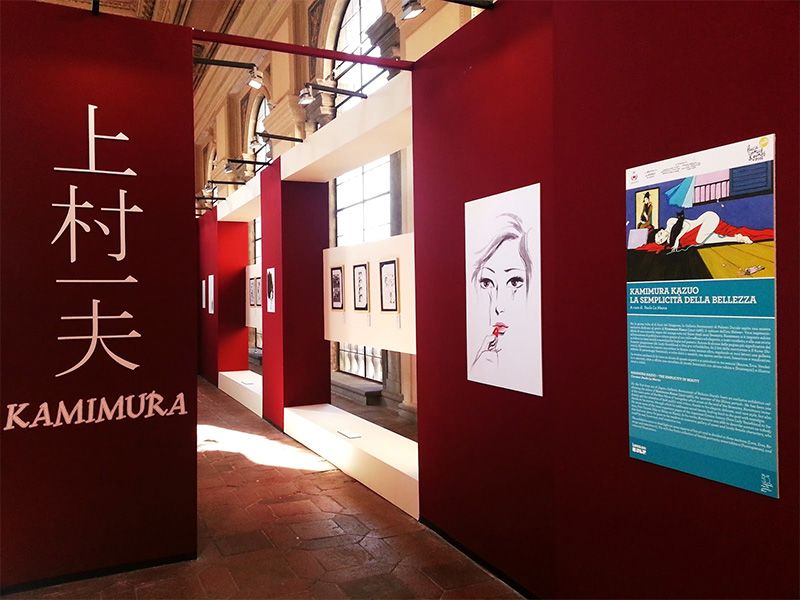 Translation of Kamimura’s manga presents special challenges. “His style is very poetic,” explains La Marca. Kamimura drew inspiration from Japanese literary classics. One of his manga, Ichiyō uranisshi (Ichiyō’s Secret Diary), was based on the life of the writer Higuchi Ichiyō (1872–96), and the reader can learn a good deal about her life and work from its episodes.

“Translating his work requires a lot of research,” says La Marca. “In Shurayukihime, for example, Kamimura uses archaic Japanese, and the characters speak in various dialects, some indicative of class differences. Recreating the same nuances for the Italian reader was quite a challenge.” 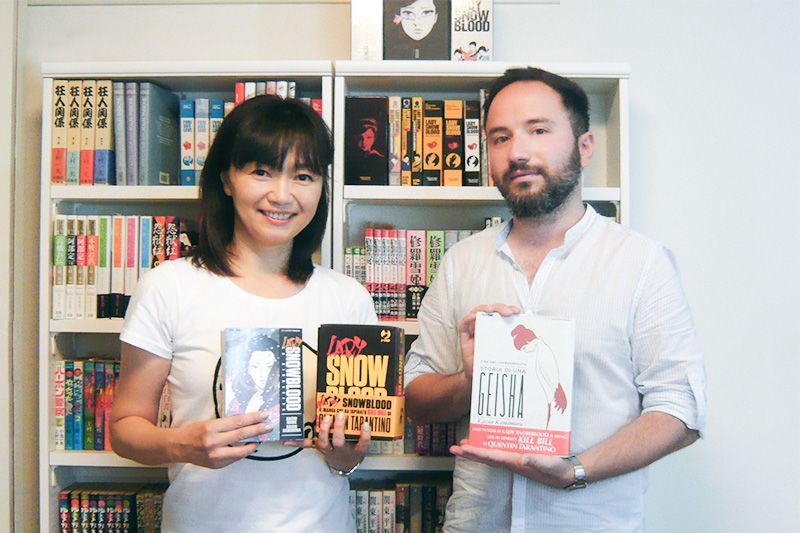 La Marca and Migiwa, Kamimura Kazuo’s daughter, hold up some of his works in translation. © Paolo La Marca

The Beauty and Sadness of Kamimura’s Women

It is said that Kamimura’s female characters typify the postwar aesthetic of the Shōwa era, which stretched from 1925 to 1989. His stories are about beautiful women in pursuit of happiness: “There is something sad in their expression; they‘re always gazing into the distance with tears in their eyes. They’re searching for happiness, but on the path they’re on, they find sadness.”

In Dōsei jidai, the protagonist Kyōko is searching for happiness with her boyfriend Jirō, but in the end they split up. “There are no happy endings in Kamimura’s manga. A lot of manga artists can describe happiness, but only a few can depict sadness. To depict sadness and beauty at the same time is especially difficult. Kamimura was perhaps the first manga artist to unify these two qualities.”

But Kamimura’s women are also strong. Kashima Yuki, the main character in Shurayukihime, is the most conspicuous example, a woman “determined to become an assassin to achieve her aims.”

Similarities between Kamimura’s women and those of the famous painter and illustrator Takehisa Yumeji (1884–1934) are no coincidence. Kamimura wrote two manga based on Yumeji’s life, Kikuzaka hoteru (Kikuzaka Hotel) and Yumeji. “The women depicted by Takehisa are also searching for something, and their expression is similarly melancholic and poetic.” 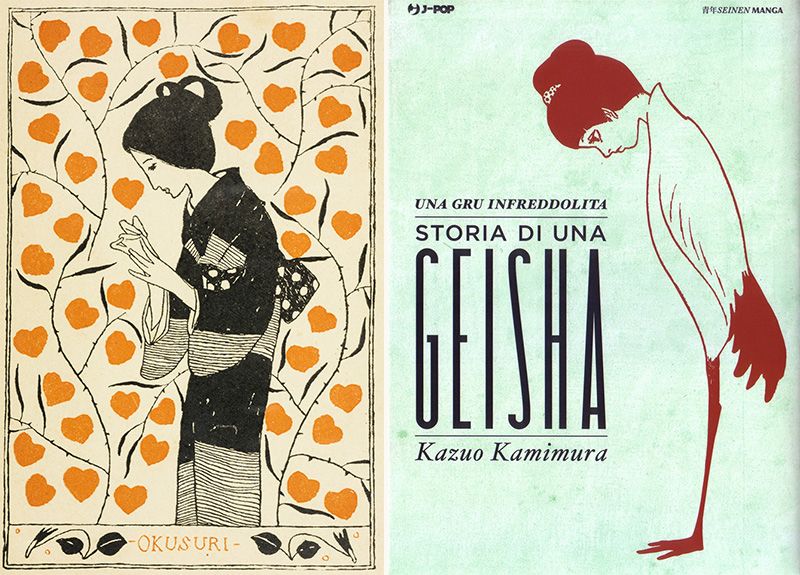 An image from Takehisa Yumeji’s Nemu no ki (The Silk Tree) and an illustration by Kamimura, as seen on the cover of the Italian translation of Itezuru. © J-Pop

“When a publisher asked for the rights to publish Kamimura’s work in Italy, Migiwa recommended that I be tapped as the official translator of her father’s manga.” La Marca’s translation of Shurayukihime was published in 2014.

Also in 2014, La Marca organized the first Kamimura exhibition in Italy, in the Sicilian city of Ragusa. A second exhibition was held in 2016 in Lucca. 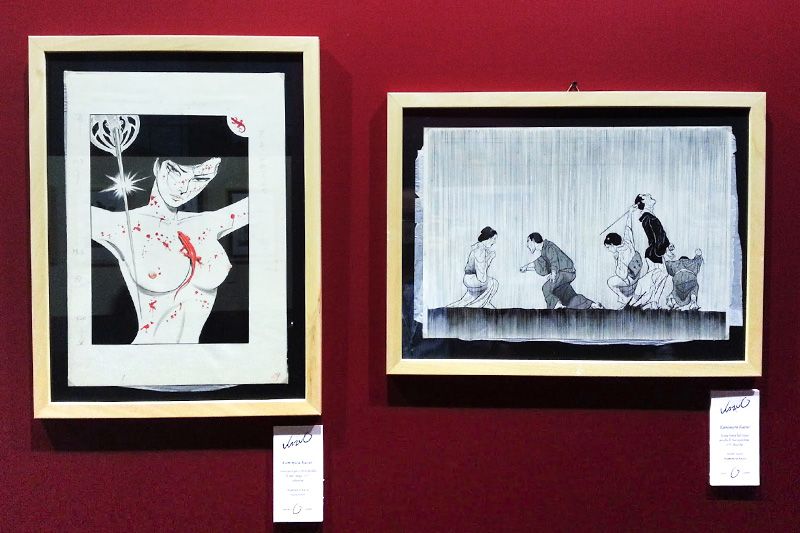 Panels from Beni tokage (The Scarlet Lizard), left, and Shurayukihime (Lady Snowblood) on display at the 2016 exhibition in Lucca. © Paolo La Marca

Although Kamimura’s manga were published in Japan decades ago, his stories remain relevant. For example, the trials of the couple in Dōsei jidai, who want to live together without marrying, have much in common with the challenges faced by same-sex couples in many societies today.

“Kamimura probably never imagined that his manga would be translated into English, French, or Italian, as he was very focused on Japanese culture,” muses La Marca. “But now he’s known in Europe as one of Japan’s most remarkable manga artists. I think it’s time the Japanese rediscovered his work as well.”