Lessons from the Bees: The Rooftop Hives of Central Tokyo

Society Lifestyle May 31, 2016
In 2006, the Ginza Honey Bee Project set up hives on the top of a multistory building in central Tokyo. A decade on, the project is a regular supplier of honey to local businesses and continues to provide food for thought on the relationship between the urban and natural environments.

Once Upon a Rooftop 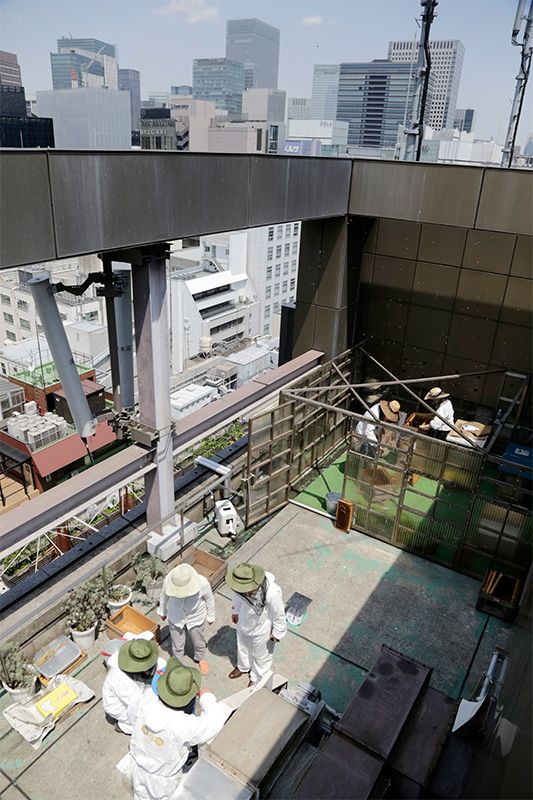 The Ginza Honey Bee Project set up its hives on the Kami Parupu Kaikan building.

Every day, some 400,000 people converge on Ginza in central Tokyo. Venerable establishments that have been in business since the Edo period (1603–1868) stand alongside gleaming emporiums for luxury imports in a district that has long defined itself by its intermingling of diverse cultures, old and new.

Still, few of the pedestrians bustling through Ginza’s streets would ever suspect that it is also home to a vast community of honeybees dwelling on the roof of one of the district’s multistory buildings.

The urban bee farm is the work of the nonprofit Ginza Honey Bee Project, or Ginpachi, founded in March 2006 by Tanaka Atsuo. It started when Tanaka, who rented out space in Ginza, learned from a beekeeper that it might be possible to raise honeybees on the roof of the Kami Parupu Kaikan building. From this location, Tanaka learned, the bees could gather nectar from Hibiya Park and the grounds of the Imperial Palace, both within a radius of around three kilometers. Bees are highly sensitive to pesticides and other environmental pollutants, but the Imperial Palace is relatively free of agrichemicals. In this sense, Ginza turns out to be a surprisingly good area for beekeeping. 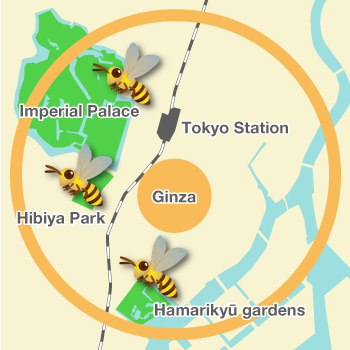 Flight range of the Ginza honeybees.

Tanaka, who leads the project, had no connection with beekeeping before 2006. Nonetheless, he was drawn to the idea of raising bees in an urban environment, so seemingly divorced from the natural world, and creating something new.

“I wondered if we might be able to produce something locally, right here in Ginza, in the center of the city. Since the Edo period, this has never been anything but a commercial district. By using bees to turn it into an agricultural production site, I thought it might be possible to raise the consciousness of people in the area. Ginza has always been receptive to the latest trends. Anything that is out of step with the character of the district is weeded out, and whatever remains accumulates as an element of the neighborhood’s culture and traditions. We decided to see whether the project could make it through the Ginza filter. The first thing was to have a go at it and see how people reacted.” 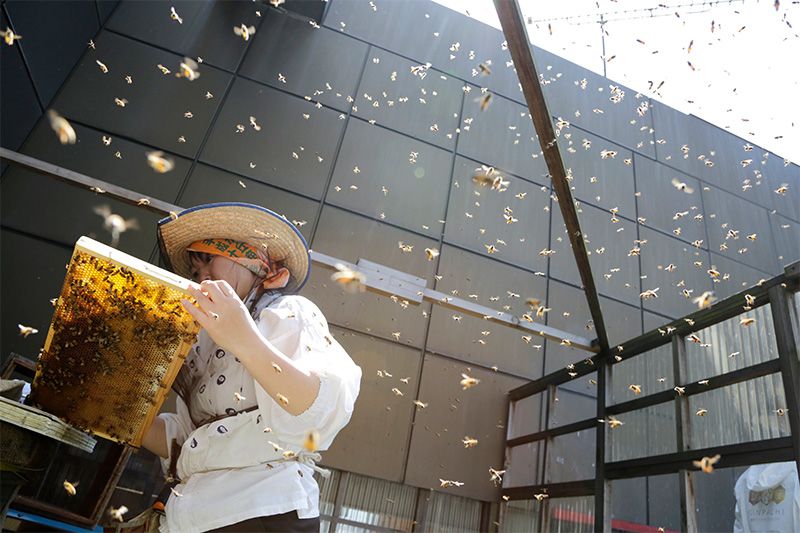 A beekeeper removes a frame packed with honey from a hive. 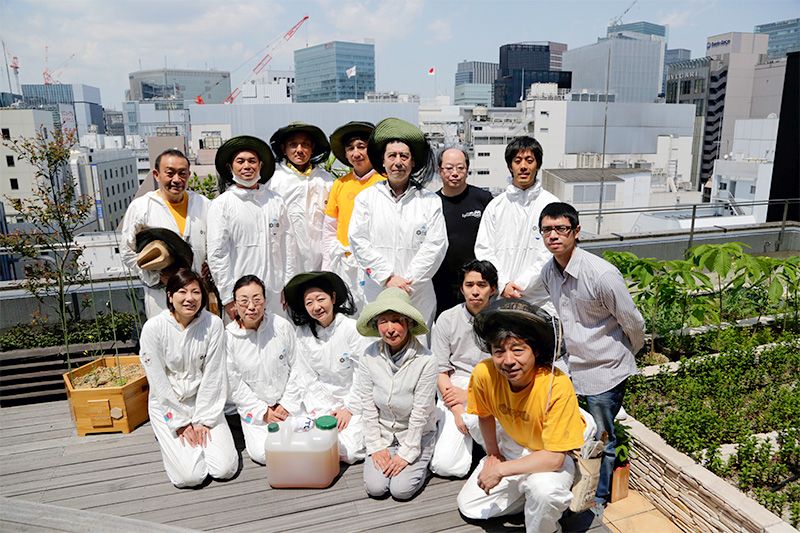 Members of the Ginza Honey Bee Project meet once a week to harvest honey. The nonprofit organization now has 150 members.

From these modest beginnings, the project gradually accumulated members—a bit like bees gathering nectar as they flit from flower to flower—and widened the scope of its operations. The Matsuya Ginza department store now has a whole line of Ginpachi honey–based products that have become popular souvenirs.

Raw honey harvested on April 30, 2016, produced from the nectar of tochinoki (Japanese horse chestnuts) and wisteria (left); Ginza honey for sale under the Ginpachi label (right).

Suzuki Akihiro, a buyer for Matsuya, explains the basis for the tie-up. “We were all in favor of the project’s aim of producing and selling locally,” he says, “partly because we’re always looking for ways to make the most of our identity as Matsuya, a Ginza department store. We offer various sweets and other products made from Ginza honey, and since our employees are directly involved in the beekeeping operations, they can talk confidently about where it comes from and confirm its safety.” The honey-based sweets on sale at the store include chocolates, custard puddings, and cream puffs.

Ginza is also famous for its nightlife. The district’s bars and nightclubs are always thinking up new attractions to give them a competitive edge. Shirasaka Aki, who manages a number of local bars and restaurants, helps harvest honey on the sun-drenched rooftop of the Kami Parupu Kaikan building. “Since I got involved in this project,” she says, “I’ve become much more concerned about nature and the environment. I’ve gotten involved in rooftop greening in the neighborhood as well. The honey highballs served at my establishments are made from whisky and soda mixed with Ginza honey, and they’re very popular with the customers.”

Bar 5517 in Mikasa Kaikan is known for its restful “old-time bar” atmosphere. Each April, the menu features cocktails made with Ginpachi Yoshino cherry honey. “We tried other honey, but we found that the Yoshino cherry honey had just the right sweetness for our cocktails,” says bar manager Takasaka Takekazu. “The cocktails are only available from April to the end of June, and some our customers practically count down the days until spring.” One short drink combines Yoshino cherry honey with the German spirit Korn; blending sweetness and refreshment, it is a taste of spring’s bounty. 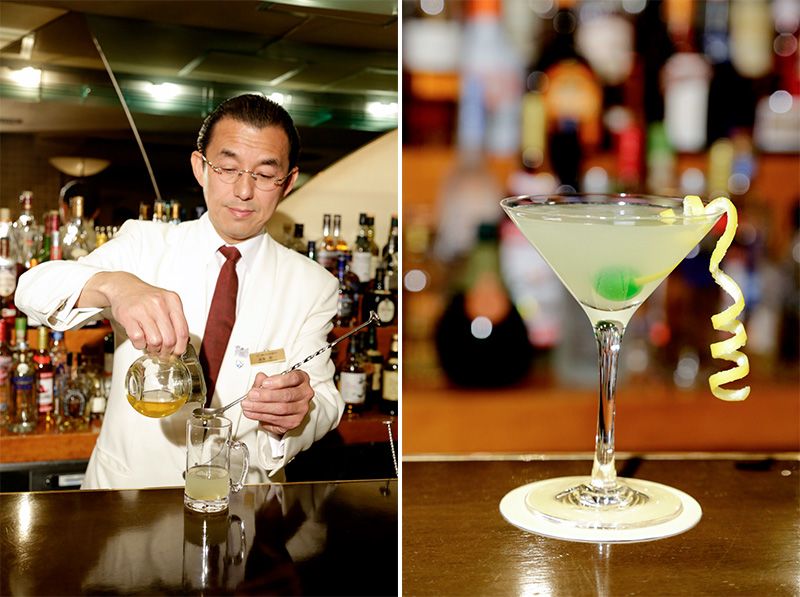 A cocktail made with Yoshino cherry honey from the Ginza project.

Nature and the City

In the 10 years since the Ginza Honey Bee Project began on one corner of a Ginza rooftop, the ripple effect has spread to other parts of Tokyo and far beyond. There are now more than 100 urban beekeeping projects nationwide, and more in South Korea, Taiwan, and elsewhere in Asia.

“Ten years ago, of course, we never imagined the project would have such an impact,” Tanaka says. “I think it’s because people have been able to make it into their own project, reflecting local conditions and responding to local issues.”

Tanaka also credits the honeybees themselves, emphasizing what human beings can learn from contact with these industrious insects. 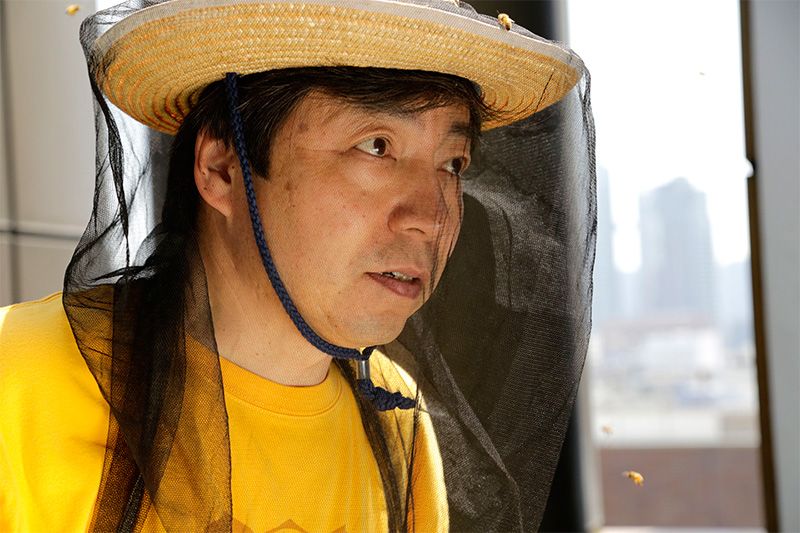 “For example, when I see the bees returning to the rooftop from their flight around Ginza, I can tell from the pollen stuck to them that it’s safflower season, or the tochinoki [Japanese horse chestnut] trees are in bloom. Spending time with the bees puts us in touch with the natural world and its changes. Ginza may seem an unlikely place to be tackling environmental issues, but it’s becoming that sort of neighborhood.”

As part of this trend, Tanaka is promoting a rooftop greening project called Ginza Bee Garden to increase the number of nectar sources for the bees. “The fact that honey bees, which are so sensitive to environmental changes, can survive in the center of a metropolis is evidence that even tiny and fragile creatures can thrive here. Perhaps the idea that cities are places where only the powerful flourish is a relic of the past.”

The tiny creatures that make their home on a rooftop in central Tokyo continue to provide ample food for thought on the relationship between nature and urban living. 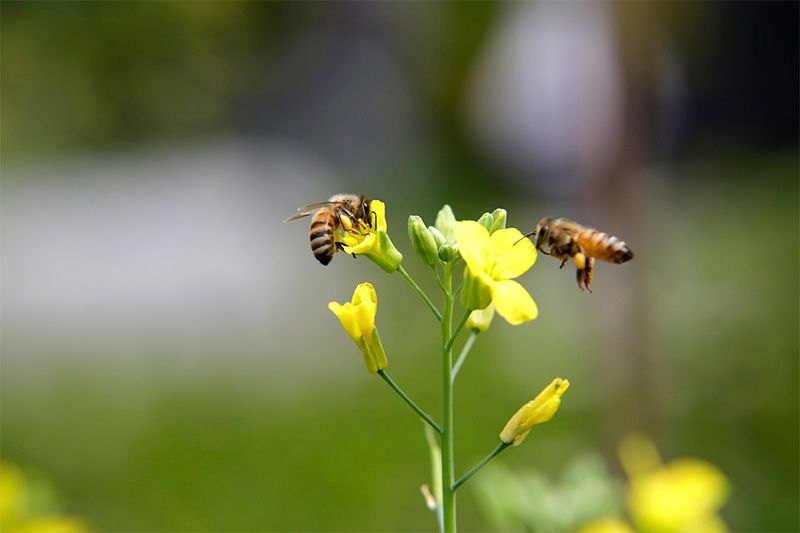 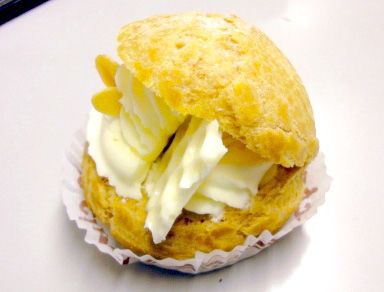 These chocolates evoke the beehives with their honeycomb shape. The two varieties are made with honey produced in different seasons. 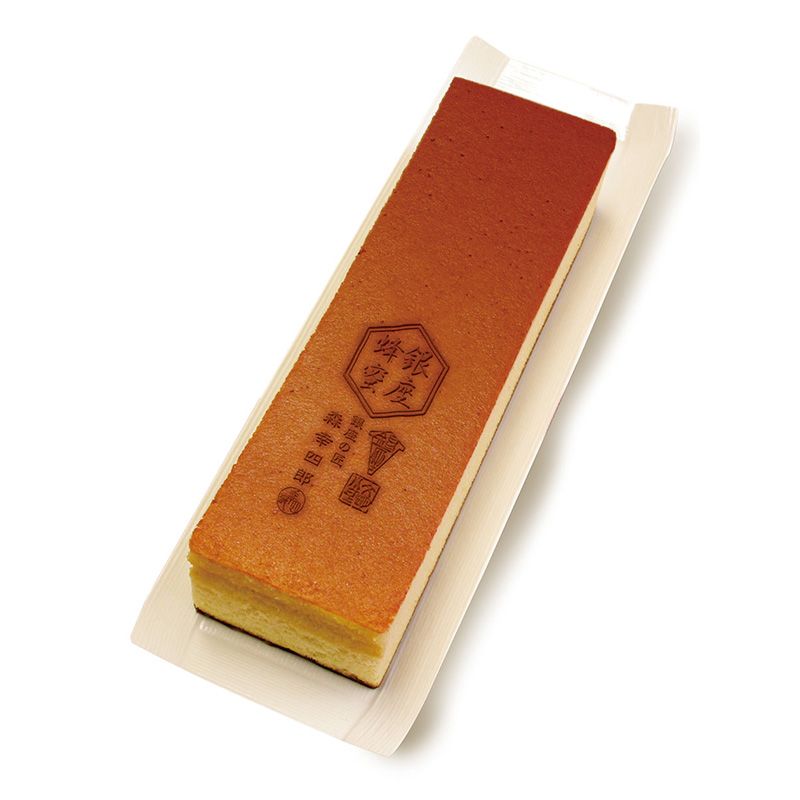 This honey kasutera sponge cake is a variation on the flagship product from the venerable Bunmeidō, which was founded in 1900 and opened its Ginza branch in 1939. 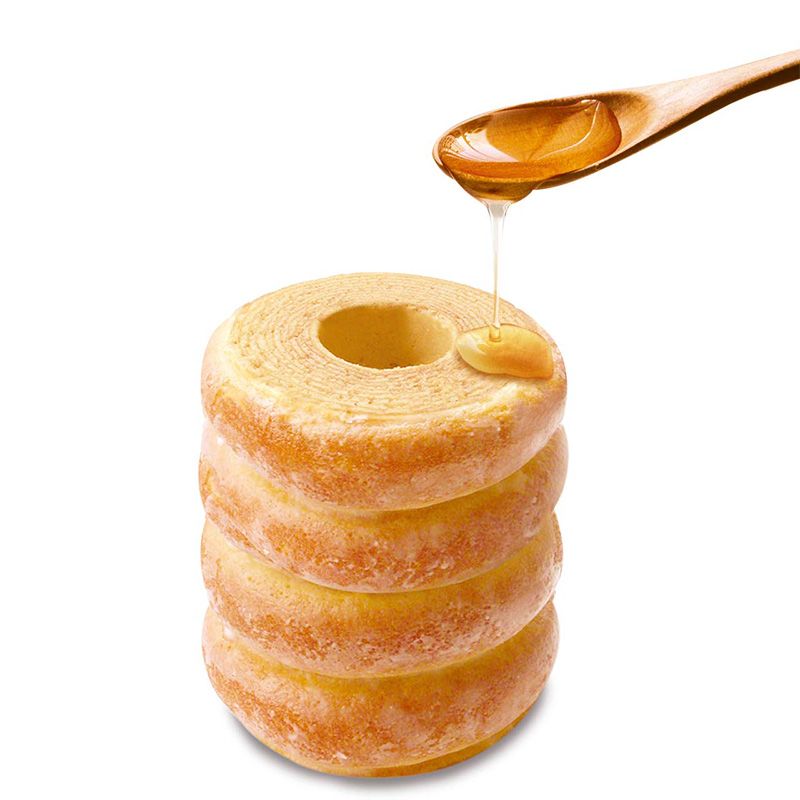 Golden brown in color, this light baumkuchen German-style spit-baked cake, also from Bunmeidō, appeals with its blend of butter and Ginza honey. 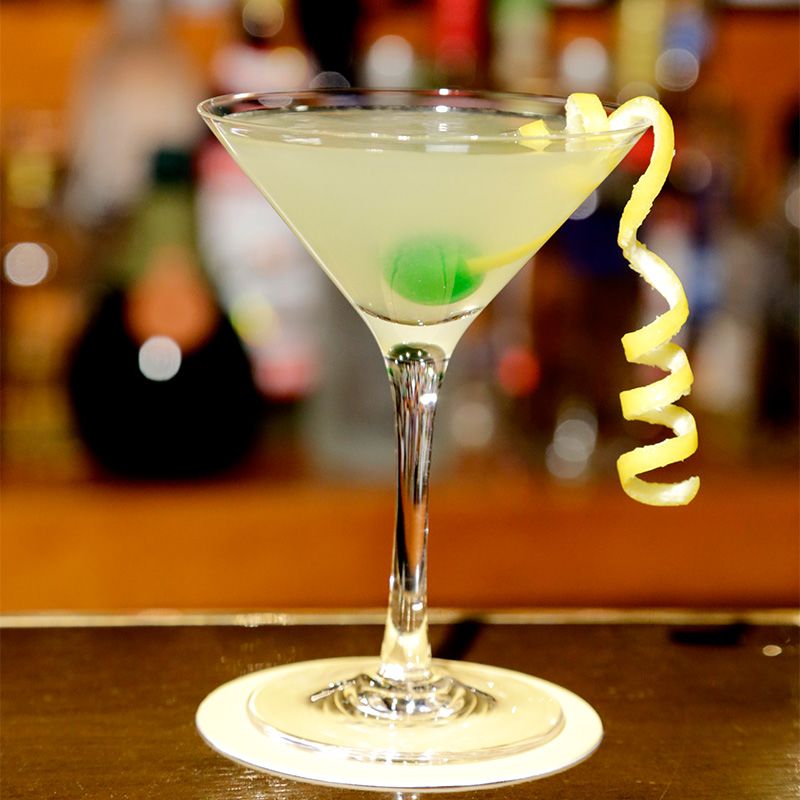 The low-key Bar 5517 in the basement of Mikasa Kaikan serves a selection of honey cocktails between April and June. Honey from local Yoshino cherries is added to Korn in one popular short cocktail. The Honey Caipirinha, a variation on Brazil's national cocktail, is another favorite.

(Originally written in Japanese by Sakurai Shin and published on May 12, 2016. Photos © Nagasaka Yoshiki.)