Culture Mar 2, 2012
Despite the ongoing downturn in Japan’s publishing industry, one fashion magazine is thriving: Popteen, a lifestyle monthly for young women that enjoys a circulation of 420,000. Who exactly are the “reader models” that have been the key to its popularity?

This is a phrase heard over and over during a photo shoot in a Tokyo studio for the cover page of Popteen, the popular young women’s magazine published by Kadokawa Haruki Corp. The Japanese verb moru, which originally meant to pile or fill, has in the last several years entered the language used by young women to mean putting on more vivid makeup or creating a more elaborate hairstyle. More recently it has taken on the added sense of “making something better”—raising the tension level or fun factor in a given situation.

Young Japanese women seem to have their own language to match their own special fashion and lifestyle culture. This culture’s charismatic nature is embodied in Japanese publishers’ embrace of the “reader model”—the dokusha moderu, or dokumo for short.

For most people, the word model brings to mind a tall, beautiful girl with a perfect body and proportions who works professionally in the fashion industry. The dokumo does not fit this description, though. The height of most of the popular dokumo appearing in the pages of Popteen is between 155 and 165 centimeters, the average height of a Japanese woman. Dokumo are also unique in that they are amateurs, either students or workers with jobs unrelated to modeling.

The most important thing is that they have a realism that readers can relate to. An editorial staff member at Popteen explains: “When you listen to the dokumo, you get to know what’s currently on readers’ minds and what interests them. Through this magazine we share information and build a culture among readers who have the same perspective as our dokumo.” 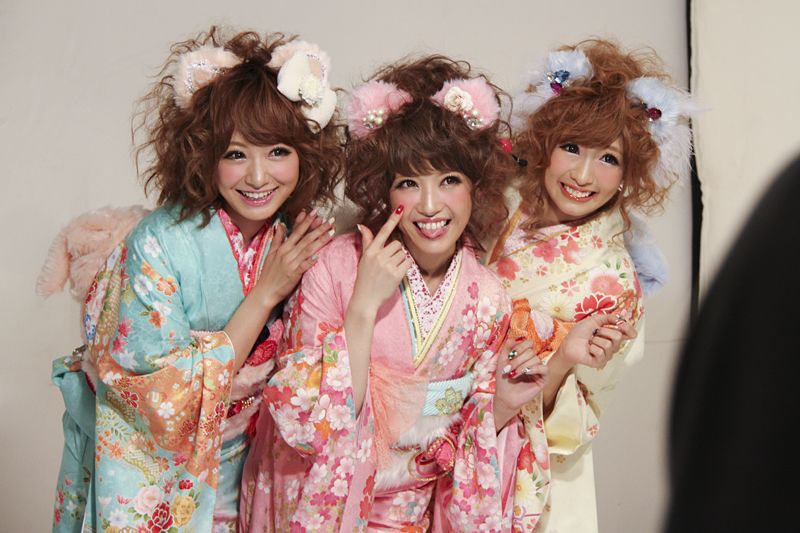 From left to right, Mizukiti from Saitama Prefecture (born in 1992), Kumikkī from Tokyo (1991), and Pikarin from Chiba (1994).
For a behind-the-scenes look at the girls having fun on their photo shoot, click here: Behind-the-Scenes Look at a Popteen Cover Shoot (Video)

Dokumo attract attention among girls of their generation not only as fashion figures but as cultural icons as well. 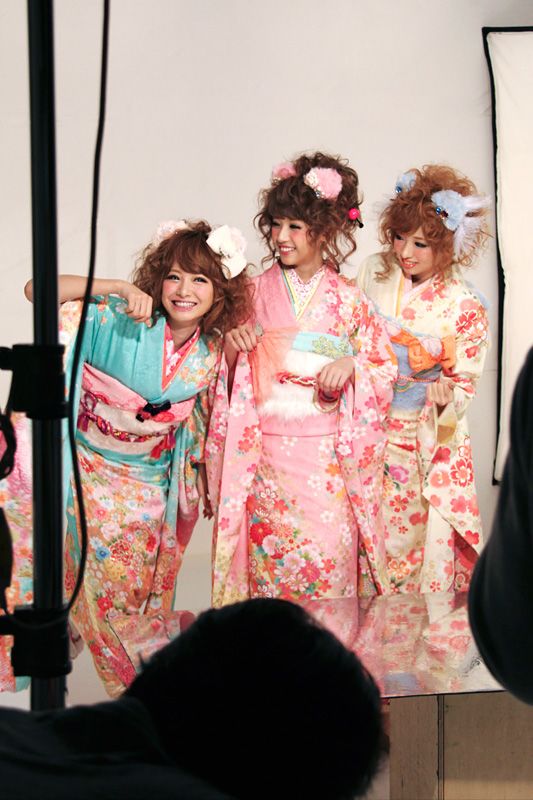 All three girls are energetic and cheerful, coming up with original poses one after another.

Reader models openly express their thoughts as they write about their day-to-day activities and post photos on their blogs. Readers come to admire and feel a greater sense of familiarity with dokumo when they see them communicate openly and frankly about subjects considered taboo for their professional counterparts, such as romance. Photos of the models with their boyfriends appear on magazine pages and in their blogs, to the particular delight of teenage girls, with their deep interest in relationships.

Thanks to their role as representatives of the readers, more than as just models, these dokumo wield enormous influence and economic impact. Products introduced on dokumo blogs often sell out immediately, and sales of items developed by fashion or cosmetics brands in collaboration with the young models are a bright spot in the industry. The economic impact of the charismatic dokumo Kumikkī (Funayama Kumiko), whose schedule is packed with celebrity appearances and the production of fashion items, is said to be well above ¥100 million each month. The reason probably lies in her easily imagined familiarity with fashion consumers and the persuasive power she brings to bear in promoting the products. The direct personal appeal to customers is anything but subtle in marketing slogans like “Wear these and be just like Kumikkī,” accompanying colored contact lenses that she had a hand in producing.

Kumikkī herself says that she idolized Hoshino Kana, a former model for Popteen. “I was constantly trying to do all kinds of things that she did. My thought was that I could become just like her.” 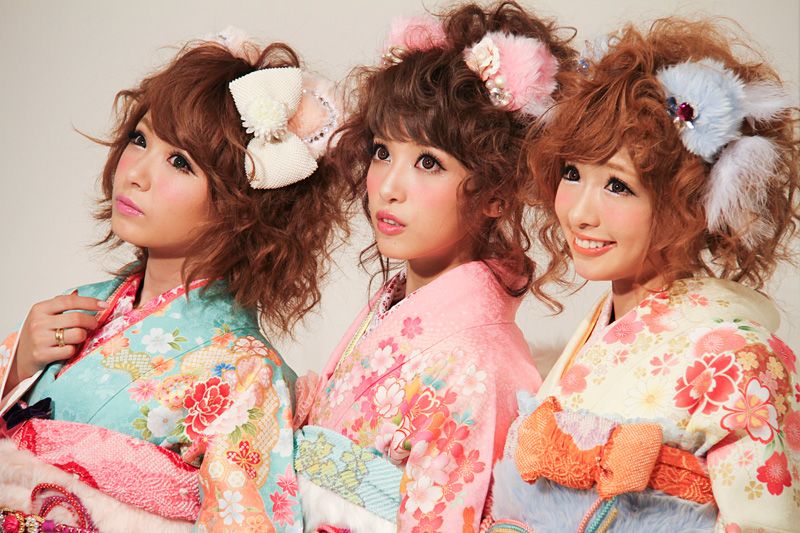 The Appeal of “Being Yourself”

Readers become attached to particular dokumo because of their individuality and unique ways of thinking. “We often put notices in the magazine to recruit dokumo,” notes one of the editorial staff at Popteen. “But when we make the final selection, the most important thing is to find someone who definitely has her own take on things.” 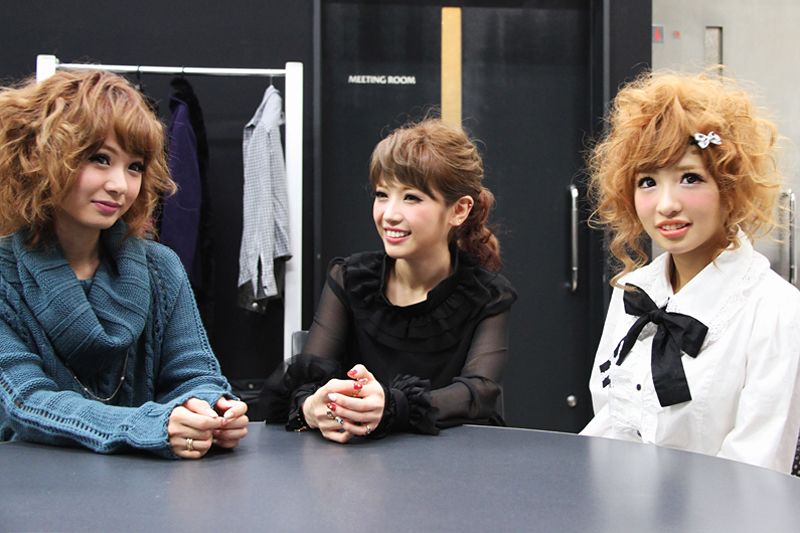 The three friends sit down together after the shoot. Their ensembles show three distinct fashion styles. To each her own!

Fashion observers note individualism as a commonly shared concept among young Japanese women, who show an increasing willingness to wear whatever clothes they want, in a style that they choose on their own. Their unique style of self-expression is summed up in the simple reason that many of them give to explain their selections: “Because we’re gyaru!”

On the day of the shoot, the popular dokumo Pikarin (Shiina Hikaru) has her nails painted in an intricate, boldly colored design featuring little Chihuahua dogs. Kumikkī says with a grin: “Pikarin really makes a strong statement with her nails. We all have these feelings of wanting to express ourselves, whether through makeup or fashion, and wanting others to know us better.” 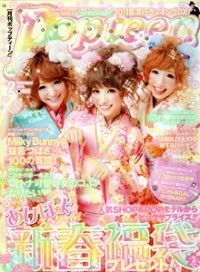 The finished cover of the New Year’s issue of Popteen. The magazine boasts top-class sales performance among Japan’s fashion magazines thanks to its high-profile dokumo. View the magazine’s website at: http://www.galspop.jp/

In recent years, Japan’s gyaru subculture has blossomed and branched out in several different directions. Readers who have left their teenage years behind and are now in their twenties want different types of publication: gyaru-oriented fashion journals that offer more mature content, for instance, or magazines for young mothers. These women do not leave gyaru culture behind as they age; they continue to put importance on individuality as they shift to more age-appropriate sources of inspiration. There is no concept of “graduation” from the gyaru phase at some point in their lives.

Within the expanding branches of the gyaru subculture, the market encouraging young mothers in child-rearing is particularly significant. Companies view this as a sector attracting increasing attention and money from consumers, and are expanding it by producing foods and daily-use items that promise to help purchasers realize more ideal households. Charismatic role models similar to dokumo have emerged in this growing gyaru mothers’ market, which already extends well beyond fashion, and there are naturally great expectations for their capacity to boost the economy in this area.

Young Japanese women have come to respect the individuality of an ordinary, accessible lifestyle over the idealized, stylish world created by companies as a marketing strategy. The power of such women seems unlikely to wane anytime soon. And the key drivers of this tremendous girl power are the dokumo, who serve as beloved role models and even alter egos for the readers who look to them for guidance or inspiration.