Culture May 23, 2012
For many years, Aizuwakamatsu was one of the most popular tourist spots in Fukushima Prefecture. Although the number of visitors has dropped since the earthquake and tsunami disaster of 2011, one long-established ryokan (inn) has managed to weather the storm, and has actually seen an increase in business. Here we introduce the timeless appeal of this special part of the world.

Situated near Mount Bandai and Lake Inawashiro, Aizuwakamatsu is perhaps the best-known sightseeing destination in Fukushima Prefecture, home to historic sites associated with famous samurai from the medieval Sengoku period of civil war (1467–1568) and the final years of the Tokugawa shogunate in the mid-nineteenth century. Although Aizuwakamatsu is located roughly 100 kilometers from the Fukushima Daiichi Nuclear Power Plant and received little more radiation than Tokyo, the disaster has taken a terrible toll on Fukushima’s reputation, and business has plummeted. 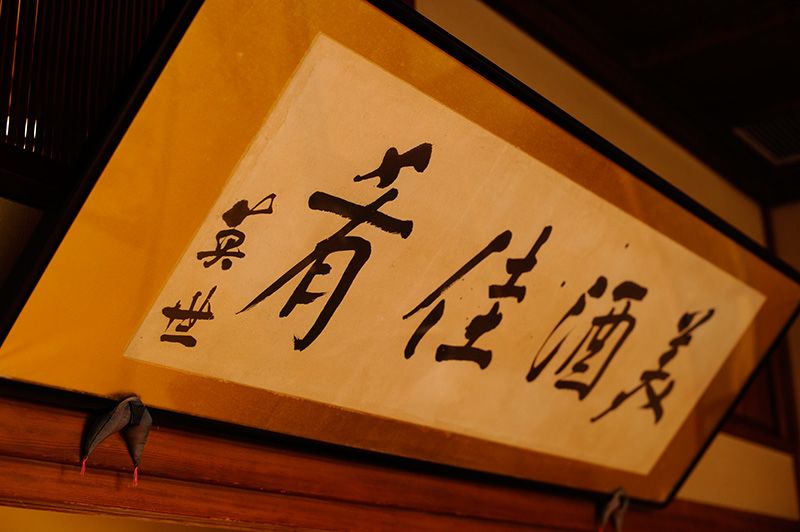 A piece of calligraphy by Noguchi Hideyo. The text reads, “Beautiful sake, fine food.” Noguchi left the comment as an expression of appreciation for the hospitality received during his stay at the inn with his mother, Shika.

But one old inn has carried on in spite of everything, and has succeeded in bucking the trend, restoring its occupancy rate to 60% of the previous year’s total by mid-April, and increasing overall business by 10% over the previous year from May onward. Mukaitaki is a 10-minute drive from central Aizuwakamatsu, nestled in the heart of a small collection of traditional hot springs hotels.

During the Edo Period (1603–1868), the building was a retreat belonging to the feudal lords of the Aizu domain. It opened as a ryokan shortly after the Meiji Restoration, in 1873. Over the years, the inn has welcomed a number of influential figures, including Japan’s first prime minister Itō Hirobumi and other leading statesmen of the Meiji era (1868–1912), the prominent bacteriologist Noguchi Hideyo (whose image features on the ¥1,000 banknote), the poet Yosano Akiko, and more recently Prime Minister Koizumi Jun’ichirō. The elegant sukiya-style of building, a vestige of the Meiji era, is on the government’s registry of important tangible cultural heritage. It is this timeless place that is leading the way in the battle to overcome the effects of last year’s disaster and get Fukushima back on its feet. 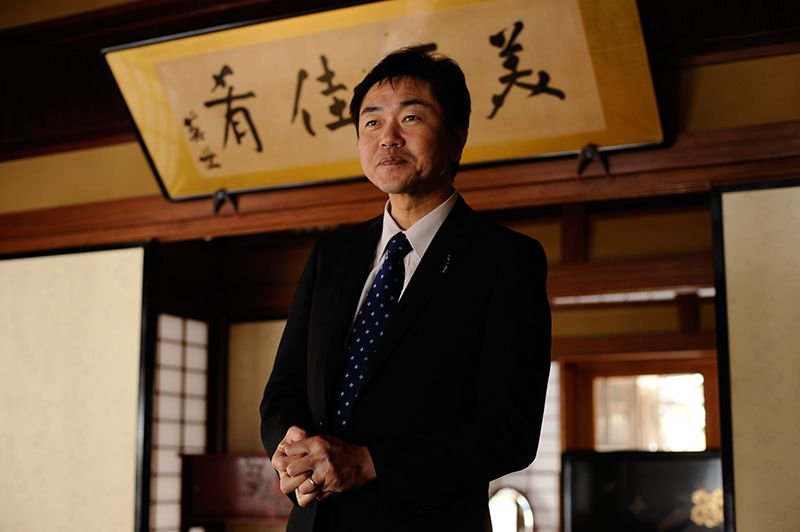 The current proprietor is Hirata Yūichi, representing the sixth generation of the family business. Looking back at the events of March 11, 2011, Hirata explains, “The quake measured a Lower 6 on the seismic intensity scale in Aizu. [At this level, it is difficult to remain standing, and heavy furniture shifts.—Ed.] But even so, Mukaitaki sustained almost no damage. Although the inn is built of wood and more than 100 years old, not a single tile fell off the roof. Not one plate broke. Guests who arrived just after the earthquake were amazed to find everything in such good condition.”

Although the quake did not affect the building itself or its furnishings, public transport ground to a halt after railway tracks and roads buckled in the quake. Supplies of gasoline and food were also interrupted. Fears of radiation contamination spread after the hydrogen explosions at the Fukushima Daiichi Nuclear Power Plant on March 12, 14, and 15.

“Aizu is about 100 kilometers from the plant, but even so I made plans to evacuate our employees and family members. I didn't know how I could manage this large ryokan on my own if I stayed behind. For a time I wondered whether this was the end of our business and the inn, which has stood here for 140 years.”

At a meeting held not long after the disaster, one local innkeeper suggested that since there was little prospect of tourists returning to Aizu for several years at least, it made more sense to focus on helping people in the worst-hit areas by opening up the region’s inns to evacuees. With the assistance of the local and prefectural government, the Higashiyama Onsen hot springs community agreed to accept people evacuated from the town of Ōkuma where the nuclear power plant is located. But Mukaitaki decided not to take part.

“Right after the disaster, we reached out through the internet, inviting people to come and refresh themselves in our hot springs. That’s one thing we have plenty of, even though we could only offer simple meals of onigiri rice balls at the time. But no one came. Instead, we had a huge response from many of our regular guests—saying they were looking forward to coming back again as soon as possible, or wanting to buy local delicacies online. With all the harm done to Fukushima’s reputation by the nuclear accident, it was far from certain that any new guests would come if we declined to participate in the plan to house evacuees. I didn’t know whether we would be able to stay in business as a ryokan, but I thought we owed it to loyal guests, many of whom had been coming to stay with us for many years, to try. In the end, I decided to turn down the suggestion that we turn ourselves into an evacuation center.”

“When the Tōhoku Shinkansen line between Tokyo and Fukushima reopened on April 12, our regular customers started to come back. Our numbers for April were down 40 percent compared to the previous year, but things quickly picked up. We were fully booked for the eight days of the Golden Week [April 29–May 6] holidays, and in May we were actually 30 percent up from the year before. 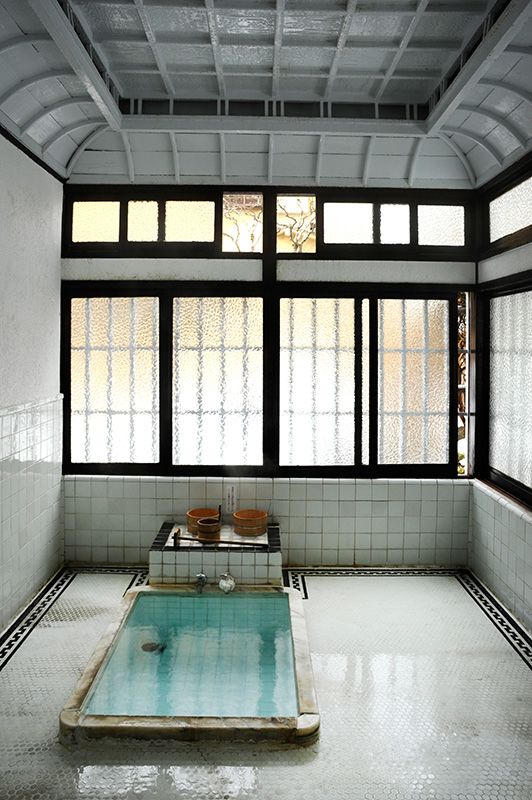 The bath in the stateroom where Noguchi Hideyo and Koizumi Jun’ichirō stayed. The interior has been remodeled several times since the room was added on in the early twentieth century, but the exterior remains unchanged.

A big part of Mukaitaki’s appeal is the opportunity it gives guests to experience the same atmosphere that delighted Noguchi Hideyo and Itō Hirobumi all those years ago.  The combination of historic exterior and modern amenities has always been popular, but Hirata says since the disaster more people than ever have been begging him to make sure things stay the way they are.

“Some people say we would get more guests if we built a rotenburo, an outdoor bath. But you can’t claim to be staying at the same inn where Dr. Noguchi stayed if you’re soaking in a brand new rotenburo. Things naturally deteriorate over time. But doesn’t it sound more appealing to say we’ve been in business for 140 years rather than just 100? I want to make the inn more beautiful than ever—not just by keeping it the same, but by making steady improvements. In that sense, time is on our side.”

The natural spring waters of the Mukaitaki Hot Spring. The inn has a number of different baths, each of them with different properties. In addition to the traditional Kitsuneyu, which dates back to the inn’s days as a recreation facility for Aizu’s samurai rulers, the inn boasts three different family baths and one large bath, known as the Sarunoyu, for communal bathing. The water emerges at close to 60 degrees, and is brought down to a more comfortable 42–45 degrees as it passes through a series of pipes. No additional heating or dilution takes place.

Local specialties feature prominently in the meals served at Mukaitaki. The menu clearly indicates that the ingredients are produced locally in Fukushima—but Hirata says this has not been a problem for any of the inn’s loyal fans.

Mukaitaki is not alone in its timeless appeal. Almost uniquely, the Higashiyama Onsen area still supports a thriving group of geisha, a significant number of whom are still in their twenties. Veteran geisha pass their skills down to the next generation, and traditional performing arts dating back to the Meiji era can still be enjoyed today. The repertoire is expansive, ranging from classical standards, called hauta, to local folk songs and dance performances depicting the tragic end of the doomed Byakkotai (White Tiger Battalion) a group of teenaged samurai from the Aizu domain who took their own lives in defeat during the Boshin War (1868–69), in which Aizu sided with the shogun’s forces against the new imperial government.

A renowned singer and shamisen player, Mikiko is a veteran geisha with many years’ experience (though she demurs from saying precisely how many), greatly respected by younger performers. Mikiko believes the distinctive charms of the Higashiyama geisha traditions are intimately bound up with the culture and topography of the region.

“Aizu is close to Niigata on the Japan Sea coast. The cultural traditions of Kyoto arrived in this area from that coast. The performing arts have been popular in this region for centuries. At the height, there were more than 100 of us geisha working here. Compared to that, things are a little lonely these days, but considering the poor economic climate, I think we’re doing remarkably well. I don’t think you’ll find as many young geisha in any other hot springs in Japan. Things were a bit subdued for a while after the disaster. At first people maybe didn’t feel it was appropriate for them to enjoy themselves. But local business leaders invited us to perform. They said it was more important now than ever to let people forget about their troubles for a few hours and maybe lift their spirits a little. I’m confident that we’ll be able to pass on our traditions to the next generation.”

People often think of geisha and their traditional entertainments as being far beyond ordinary people’s budgets. But in Higashiyama you can be entertained by a geisha for 90 minutes for just over ¥14,000. Mikiko says that many of her clients today are families and groups of women travelling together. “With women customers, it’s a kind of Girls’ Night Out. Things can get quite lively! We also enjoy entertaining foreign guests. Despite the language barrier, they have a good time and communicate with the girls through gestures and so on. It’s too bad that foreign guests have stopped coming since the earthquake. Please come back again!”

Tsukino is 22 years old. Originally from neighboring Kitakata, she has been a geisha for just four years. Passionately devoted to traditional Japanese culture since childhood, she says she realized she wanted to be a geisha when she entered high school. “I’m so happy that I can wear a beautiful kimono and a traditional Japanese hairstyle. But I’m still learning. Every day is a learning experience.”

Doing What Is Right

Along with the warmth of the local people, the “Ten Rules” that have been instilled in the children of the town since the Edo period are another aspect of Aizu’s timeless charms. The commandments lay out the rudiments of etiquette for daily life: respect your elders, always tell the truth, and so on. The last of the rules is a kind of summary: Naranu mono wa naranu mono desu, “What shouldn’t be done shouldn’t be done.”

The symbols of Aizu: Tsurugajō Castle (left) and the graves of the White Tiger Battalion

Hirata Yūichi explains: “I think the spirit of Aizu is encapsulated in the idea that you should do the right thing even if you know that you will lose. The expression Naranu mono wa naranu mono desu is a reminder to oneself. If we lose sight of these values, Aizu will no longer be itself. It’s up to us to make sure that doesn’t happen.” 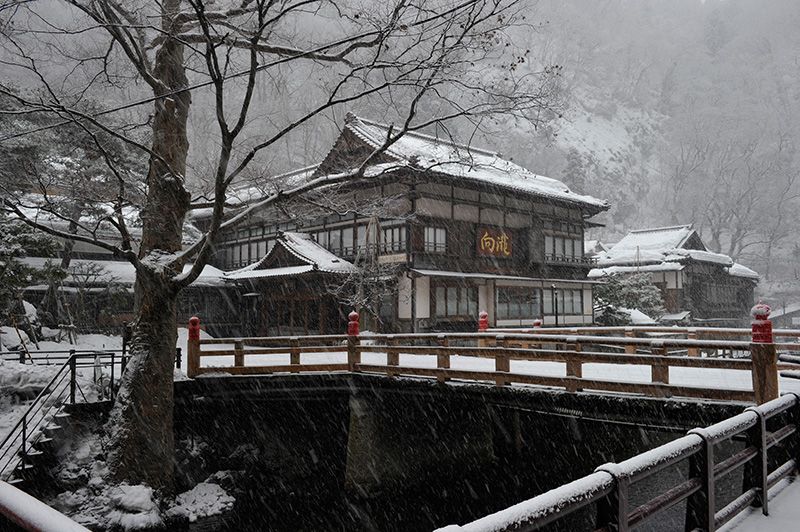 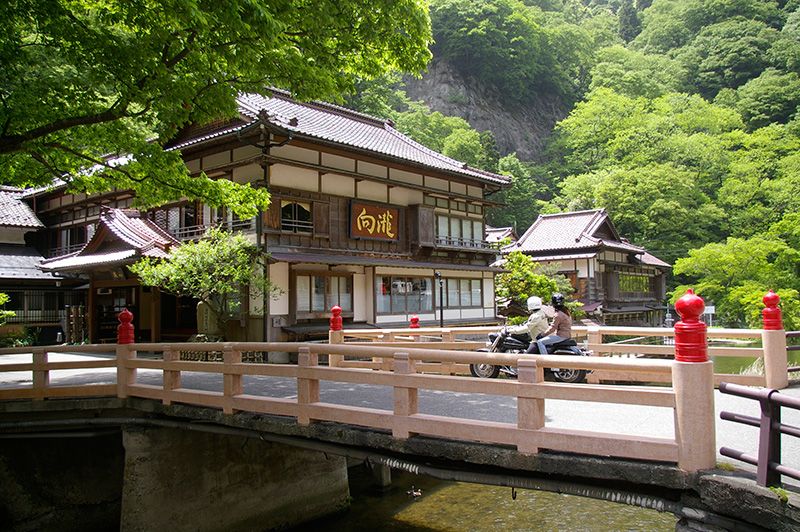 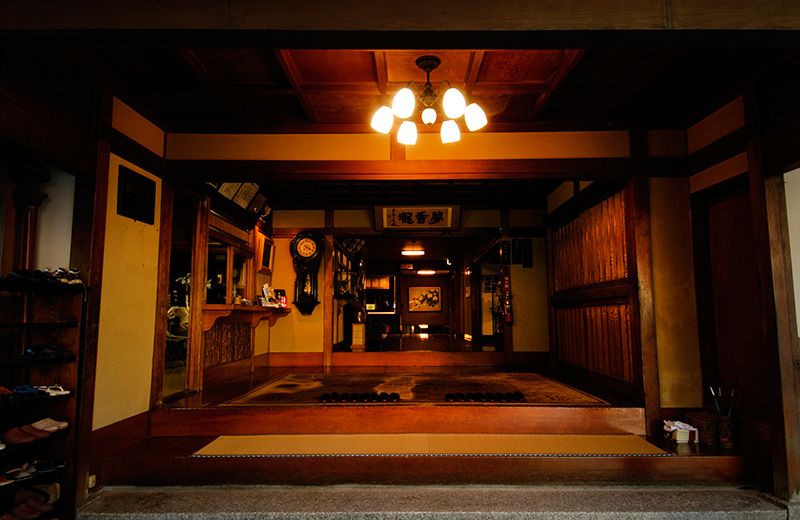 The entrance hallway, redolent with 140 years of history 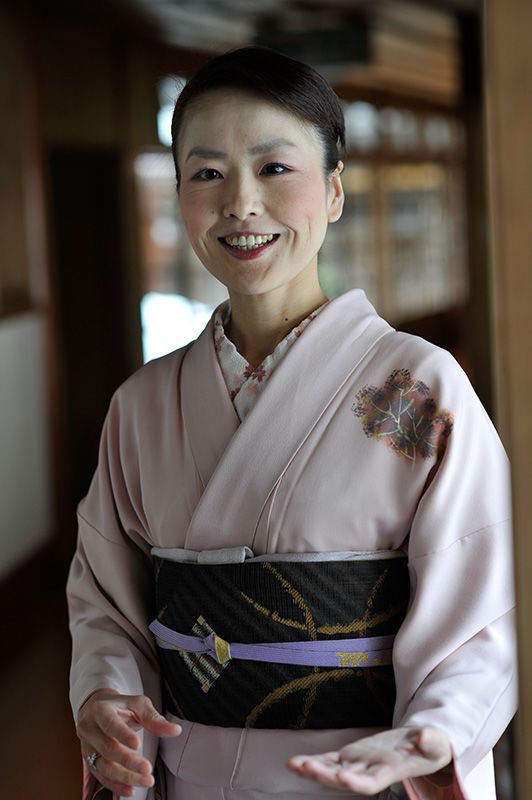 The mistress of the inn, Hirata Machiko 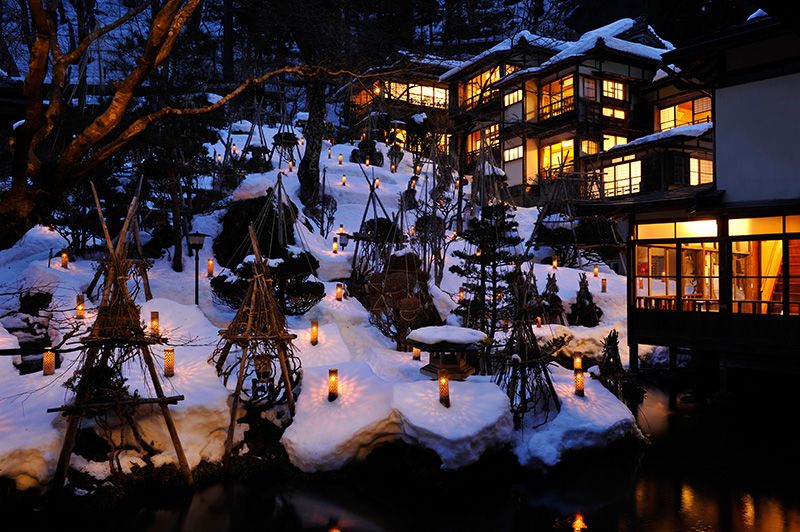 The inner courtyard lit with candles for snow viewing. Hirata introduced the idea in 2001 as a way for guests to enjoy the Aizu snowscape. The bamboo casings are all handmade. 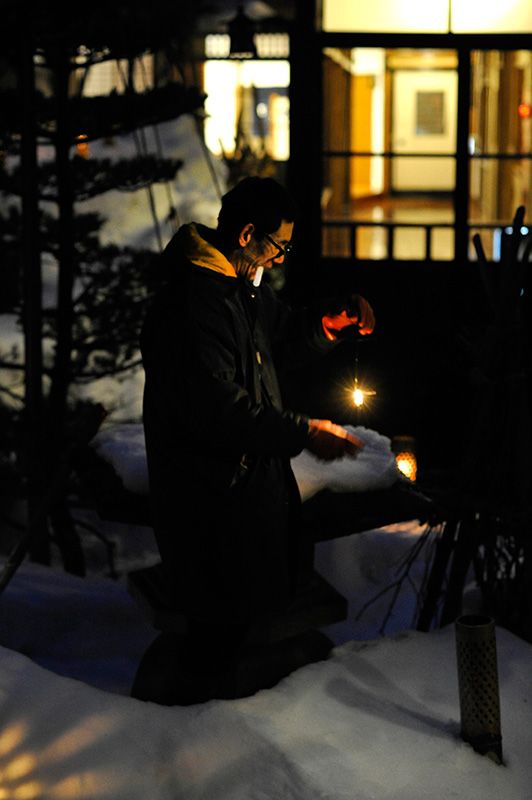 An employee replaces burnt-out candles in the sub-zero temperatures. 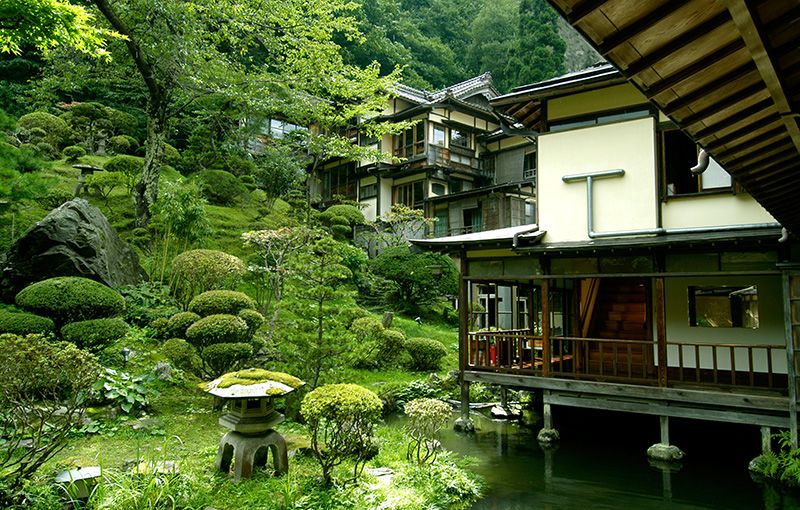 The inner courtyard in summer 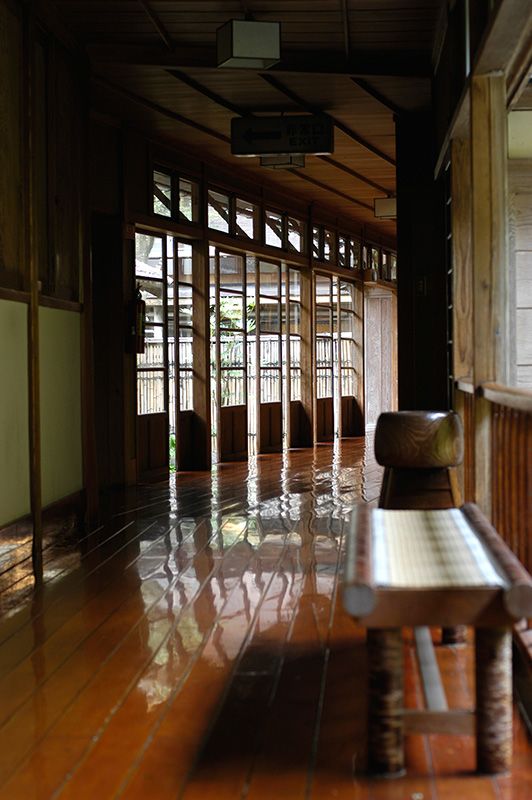 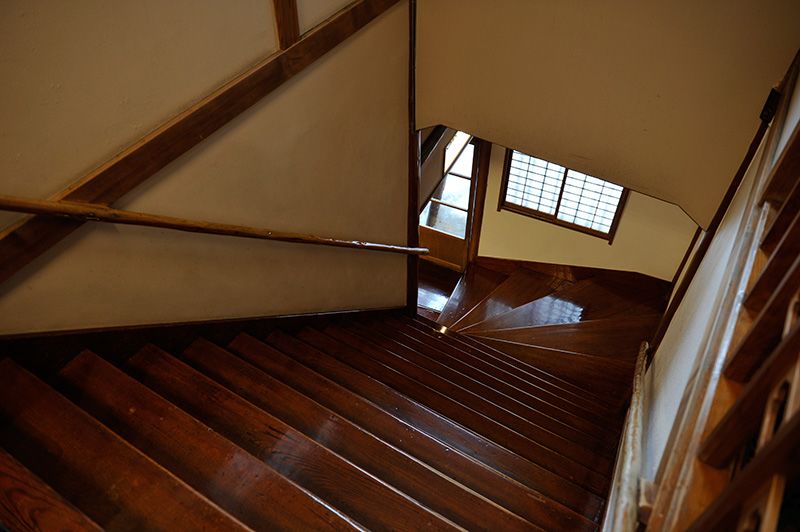 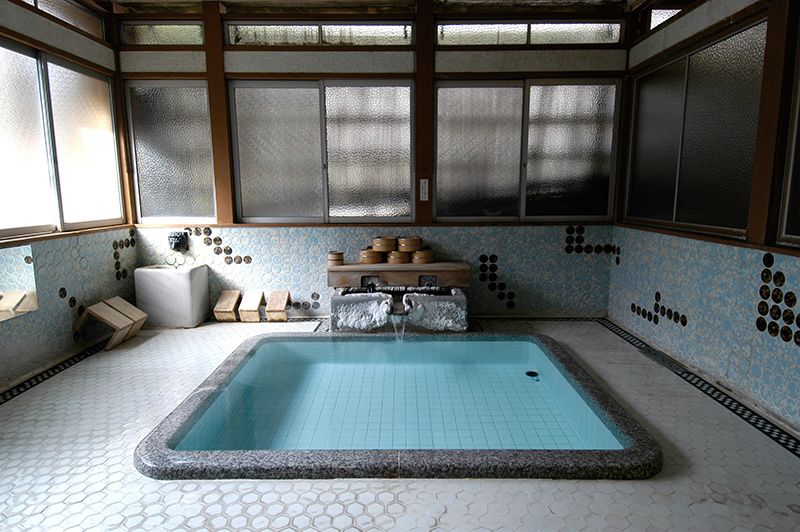 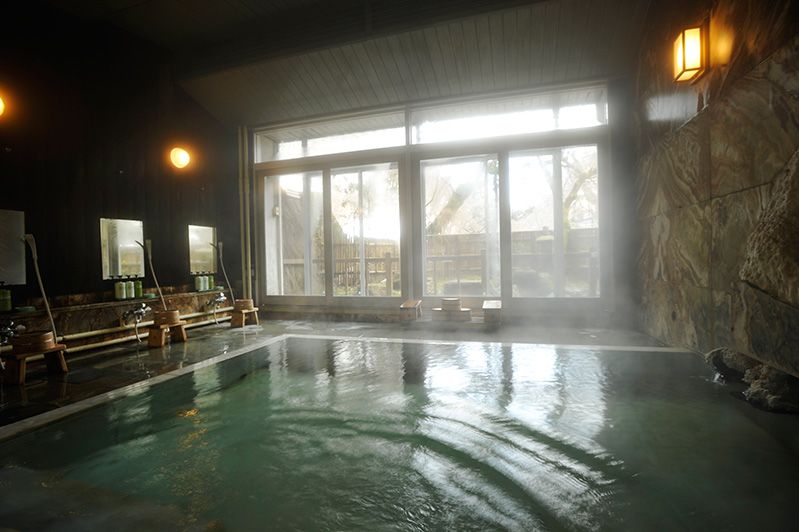 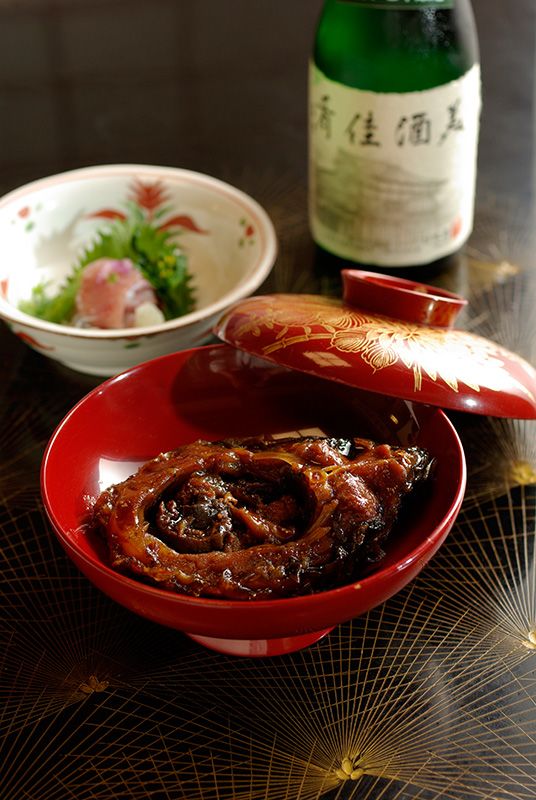 Sweet steamed carp—a local delicacy—served with a bottle of the inn’s own sake, named after the message in Noguchi Hideyo’s calligraphy.