Culture May 24, 2012
Hiroki is one of the sake brands credited with igniting a boom in the market for small-batch craft brews from local breweries. But the tiny brewery in Fukushima Prefecture that produces the brand was once on the verge of closing down. Today, it has been dramatically reborn as a producer of microbrews that are sought out by aficionados around the country. 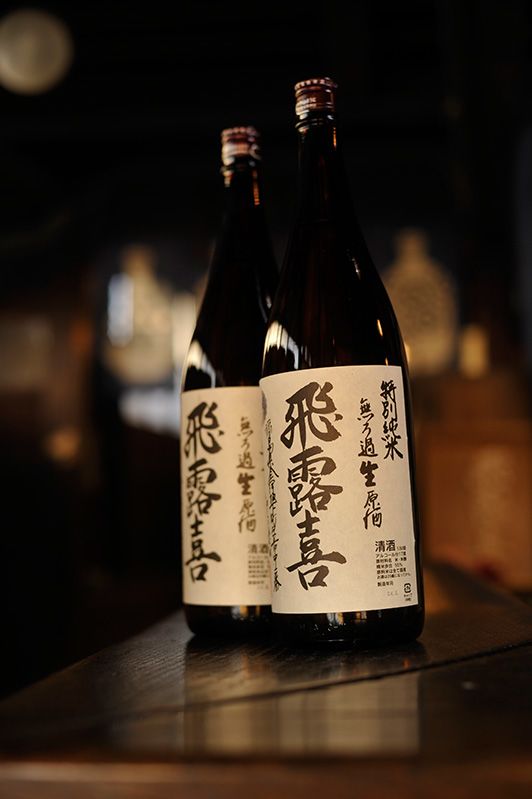 The Hiroki muroka nama genshu. Supplies of this year’s brew have already sold out.

There cannot be many sake lovers in Japan who are not aware of the Hiroki brand. This famous muroka nama genshu (unfiltered, unpasteurized, and undiluted sake), with its refreshing taste and delicate aroma reminiscent of a fruity white wine, has converted countless people to the joys of fine sake. But the difficulties involved in preserving this delicate, unpasteurized sake limit the amount that can be shipped, making Hiroki a famously elusive sake, available only in a limited number of specialist shops around the country.

Hiroki Shuzō (Brewery) has been making sake since the middle of the Edo period (1603–1868) in Aizubange, a town in the western part of the Aizu Basin of Fukushima Prefecture. Despite its long history, the brewery was on the brink of closure when the current boss Hiroki Kenji took over as company president.

Starting from Less Than Scratch

Until the 1990s, most of the sake consumed in Japan was cheap and unsophisticated mass-produced sake. The subtler charms of the small-batch jizake (local sake) microbrews remained the province of a relatively small number of connoisseurs. With many of the master brewers (tōji) responsible for passing on the traditions and techniques of the craft entering their twilight years, sake brewing was an industry in crisis. Planning for a career outside the business, Hiroki Kenji entered university, where his course of study had no connection with sake brewing whatsoever. After graduation, he spent three years as an office worker.

“Eventually I went back home. As the eldest son of a traditional brewing family, I thought I ought to try making my own sake at least once in my life. Not long afterward, the tōji who had steered the brewing process for us since I was a kid retired. On top of that, my father suddenly passed away. When I started out, I knew next to nothing about brewing or distribution. Part of me was tempted to close the business down. I even started studying to become a tax accountant at one stage.”

Just as Kenji was trying to find his bearings, a TV director from NHK Fukushima approached him about making a program that would show the landscape of Aizu, famous for rice and sake, from the perspective of a local brewery.

Breathing New Life into the Brewery 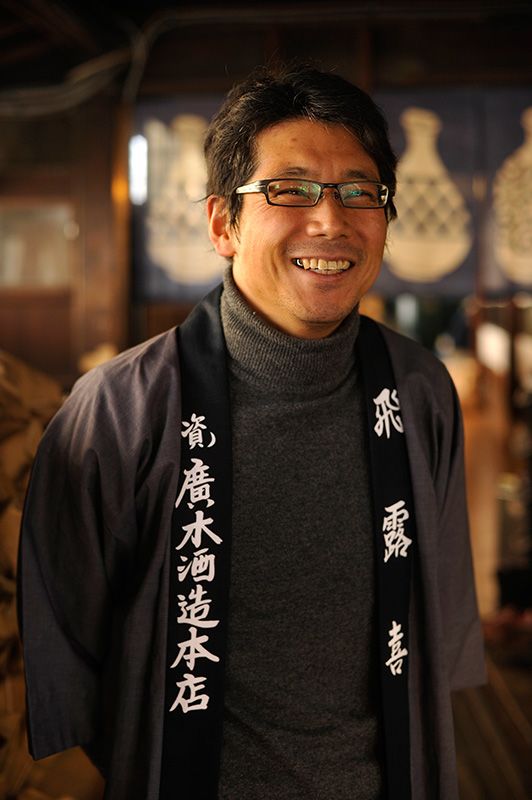 “They apparently called every brewery in Fukushima Prefecture and chose us because we seemed to be in the biggest mess. I don’t remember it very well myself, but apparently I told them, ‘We have no brewmaster, my father died last year; I may as well set the place on fire.’ I guess there was an air of tragedy about me. I wasn’t convinced it was such a great idea to expose the truth about the state we were in on TV. But I accepted the offer anyway. My eldest son was two at the time. I thought, when he grows up, I’ll be able to show him the footage and tell him that his father was born into a brewing family and used to make sake.”

After the program aired, Kenji got a phone call from a jizake specialist in Tokyo offering support if Kenji was serious about making good sake. But when Kenji sent in a sample, the verdict was harsh. “Hopeless,” he was told. “We won’t get any repeat customers with a product like this. You’ve got to try harder.”

“Back then, I was just trying to imitate the taste of popular brands from Niigata Prefecture. I assumed that good sake was the stuff that sold well. But how could I hope to compete against these brands, developed over years by veteran brewmasters? We stood no chance. I realized that I needed to go back to basics, and think again about my own ideas of what the ideal sake should taste like.”

Kenji set out to discover his ideal sake, reading books by famous brewmasters and scouring the data from specialist brewing laboratories. In time, he came to understand that the way the ingredients were prepared before brewing was key.

“It’s true for any kind of craft production, I guess: You have to get everything right at the start of the process. It doesn’t matter what you do downstream: If the raw materials going into the process are not right, you stand no chance of making a good product. The amount of time we soak the rice before steaming is particularly important for us. Even ten seconds is enough to make an obvious difference in taste, so we use a stopwatch to monitor the exact soaking time with all of our products.”

The following year, Kenji took a taste of the new sake prior to heat treatment, the final stage before bottling. “I knew as soon as I tasted it that we had produced something special.” He sent a few bottles to the Tokyo shop that had given him advice, without submitting them to the heating process. Not long afterward, a request came for several dozen more of the same. The product earned top ratings at a blind tasting, and orders soared. Thus was born the Hiroki muroka nama genshu, freshly brewed sake bottled and shipped without any filtering, pasteurization, or processing.

“That was the essential shift in thinking—the idea of offering fresh, unpasteurized sake. It wasn’t really considered a marketable product before. People say now that we were partly responsible for making this style of sake popular.”

Kenji’s relative lack of brewing experience also turned out to be crucial, allowing him to flout industry convention by shipping this unusual sake. And it was the lack of regular sales outlets that led him to join hands with a sake shop in Tokyo. Hiroki Shuzō was able to achieve its current success precisely because it started from less than zero. 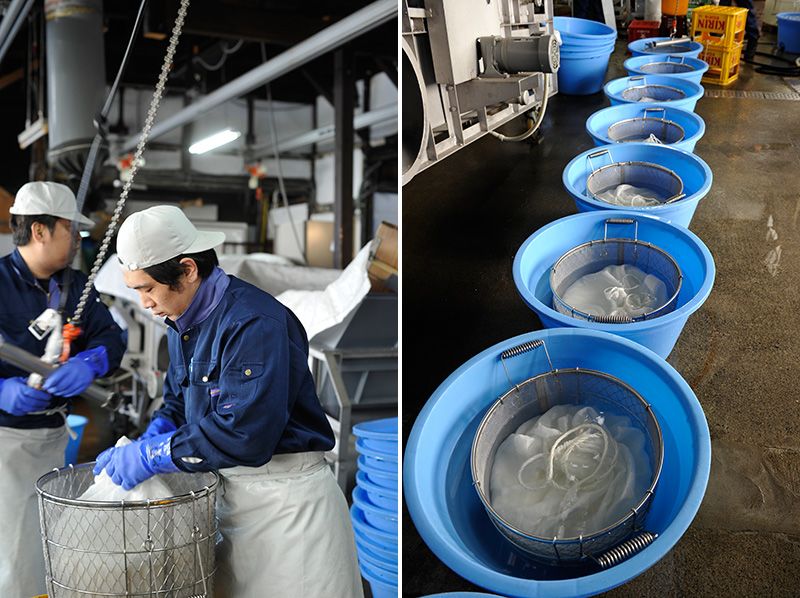 Preparing the raw ingredients: the most important stage of the brewing process at Hiroki Shuzō. The amount of time the rice spends soaking in water before steaming is controlled down to the second.

“But a sake like the muroka nama genshu is too unstable to be our bread and butter. We installed refrigeration facilities to keep the raw sake from going bad, and worked on making pasteurized versions of the sake with the signature Hiroki flavor. More than anything, I felt enormously grateful to my parents for the trust they had built up in the company through their sound way of doing business. I was able to get funding from the bank without a hitch. My parents also left me with well-cultivated land that will yield a good harvest.”

A Sense of Terroir

Having led an obscure brewery in Fukushima Prefecture to national prominence, Kenji has turned his efforts to imbuing his sake with a sense of the distinctive flavors of Aizu.

“Wine lovers will know what I am talking about when I say that I really put my heart into instilling something of the local climate and soil into the sake. All the rice we use is grown right here in Aizubange, and next door in Kitakata.”

Many agricultural products from Fukushima Prefecture have been hard hit by public fears about radiation since the accidents at the Fukushima Daiichi nuclear plant last year. This has affected even products like Hiroki that originate far from the immediate vicinity of the power station. But Kenji says he has no reservations about using local rice. 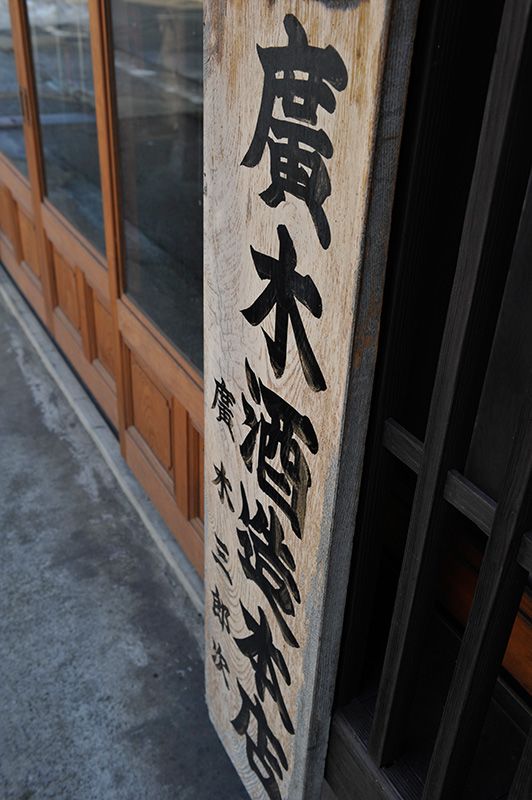 “One way we can contribute as a brewery is by using the local rice with pride and brewing sake that will win national acclaim. Of course we wouldn’t use the rice if there were any doubts about its safety. But there aren’t. Exhaustive tests carried out by farmers, the prefectural government, and ourselves have answered the question beyond any doubt. Continuing to use the local rice is our little way of helping to support Fukushima. It’s the least we can do.”

Aizubange is one of many towns that has provided temporary shelter for people forced out of their leave their homes near the Fukushima Daiichi nuclear plant. When one group of evacuees from Namie visited the brewery not long after the disaster, they told Kenji how much they were looking forward to celebrating with his sake when the day finally comes for them to go back home.

“I was extremely touched that they named our sake as something they were looking forward to after everything they’ve been through. I want to make sure that the product we make continues to be worthy of that kind of passionate support.”