Science Technology History Jul 30, 2012
Gakutensoku was a humanoid robot built in 1928 by Nishimura Makoto, an editorial writer for the Osaka Mainichi Shimbun. This is thought to be the first robot ever built in East Asia. In it, we can see the roots of modern humanoid robotics. 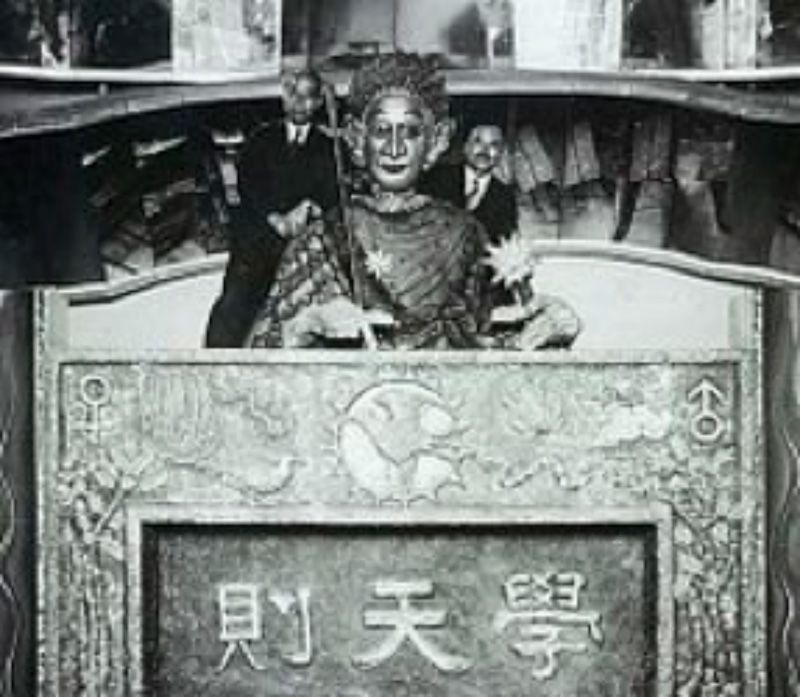 Thought to be the first robot ever built in Japan, Gakutensoku has a wide range of fluid, dynamic facial expressions and communicates by writing messages with a mechanical pen. The robot was unveiled to the public at the Kyoto Grand Exposition in Commemoration of the Imperial Coronation in 1928, and was subsequently shown at several other exhibitions before being lost during a tour of Germany. The modern version now on display at the Osaka Science Museum is a replica made in 2008.

The name Gakutensoku means “learning from the laws of nature.” The robot’s creator was Nishimura Makoto, an editorial writer for the Osaka Mainichi Shimbun newspaper. Nishimura was also a biologist who was deeply knowledgeable about the natural world. “Gakutensoku encapsulated Nishimura’s thoughts and ideas. The robot represents the harmony of nature and the co-existence of all natural life,” explains Hasegawa Yoshimi, curator at the Osaka Science Museum.

Towering to a height of some three meters, Gakutensoku sits at a desk with a pen in its right hand and a light in its left. The front of the desk is embossed with carvings of the sun, water, animals, and other items. The robot’s strange face with its big eyes was designed to combine the characteristics of people from all over the world. The idea was to symbolize the equality of all races. On top of its head is a crown of leaves, which form the basis of all the world’s nourishment. On the robot’s breast is a cosmos flower, symbolizing the universe. The robot’s design was deliberately intended to symbolize the entirety of nature. 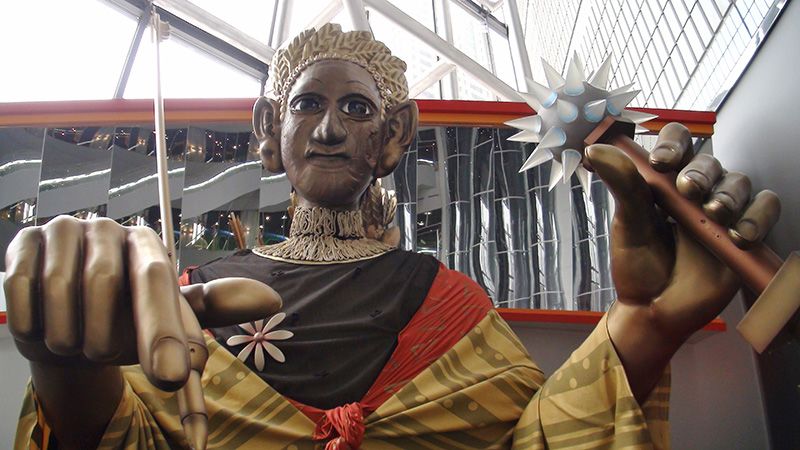 The rebuilt Gakutensoku on display at the Osaka Science Museum. The face was designed to reflect the characteristics of different types of people from around the world.

The face is made of rubber. The eyes, eyelids, cheeks, mouth, neck, and chest all move. At a given prompt, the robot closes its eyes and begins to meditate. After a period of thought, Gakutensoku opens its eyes and the “inspiration light” in its left hand is illuminated. The enigmatic-looking android smiles as it writes down its thoughts with its arrow-shaped pen (representing human creativity). The robot’s smooth movements are made possible by rubber tubes and an air pressure mechanism. The original Gakutensoku worked on a mechanism similar to a music box. A cylinder rotated at the center of the robot, pushing air through rubber tubes and bringing pressure to bear on the various moving parts. The current version uses a computer to control the movements. 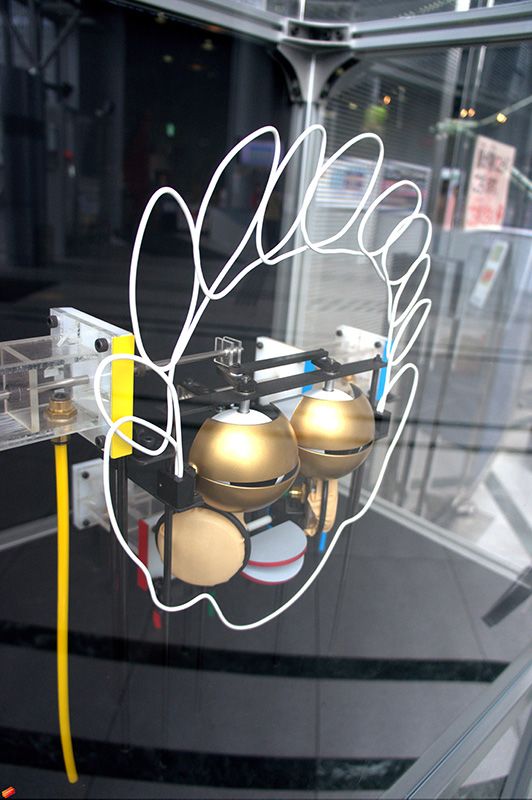 A model of Gakutensoku’s movement mechanisms.

The first person to use the term “robot” was the Czech playwright Karel Čapek, who coined the term based on the Czech word for “to work” in his play R.U.R. (Rossum’s Universal Robots) in 1920. The word originally described an artificial human that takes on the burden of human labor. In 1950, the science fiction writer Isaac Asimov released a collection of short stories under the title I, Robot. These stories were the source of Asimov’s famous “Three Laws of Robotics.”

In 1960, the first industrial robotic arms appeared in factories, and the word “robot” came into wider use to describe all kinds of machines that work on behalf of humans, rather than just androids. Research into industrial robots took off worldwide and by the 1980s a plethora of robots were being built to perform repetitive construction tasks—assembling parts, welding, and constructing components in a variety of industrial settings.

“Gakutensoku stands a little apart from the mainstream development of robotics worldwide,” Hasegawa says. “But it may be the model that comes the closest to Čapek’s original idea of a robot. For Nishimura, a robot wasn’t something that would take the place of human beings. He wanted to create something more human-like. That’s why Gakutensoku was clearly not designed for work. The shape of the robot is supposed to express the creative spirit of humanity.” Nishimura wanted to build something that went beyond the European concept of a robot. Despite the availability of motors, Nishimura chose to use an air pressure mechanism instead to give the robot’s movements a more human-like quality. Making the Gakutensoku humanlike was Nishimura’s priority—he used rubber tubes for blood vessels and a flow of air to replicate breathing.

Robots entered the mainstream in the postwar years, following the release of the hit manga and animation series Astro Boy. More recently, bipedal robots like Honda’s ASIMO have captured the public imagination. Rather than creating robots as simple working machines, many Japanese scientists are working to create humanoid robotics that can act as true partners alongside humans. The origins of this tendency can be discerned as far back as Gakutensoku.