The Dolls that Sparked Japan’s Love of Robots: “Karakuri Ningyō”

A Must-Have Product in the Edo Period 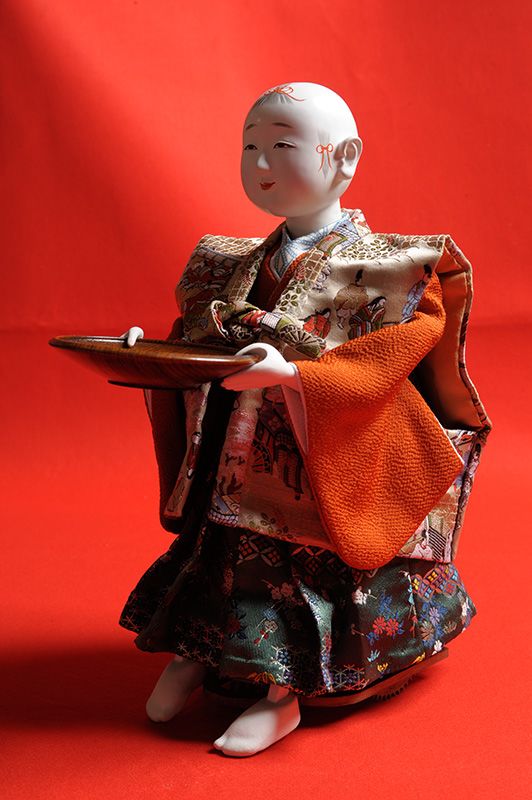 Placing a cup on the saucer of the tea-serving doll causes it to clack forward. Its gentle face and prim kimono belie the intricate clockwork motor hidden inside.

Clockwork-powered mechanical dolls, called karakuri ningyō, first became popular in Japan during the Edo period (1603–1868). Perhaps the best-known type of mechanical doll is the chahakobi ningyō (tea-serving doll). It stands at the ready, holding a tea saucer in both hands, and when a teacup is placed on the saucer, the doll bows its head and begins to shuffle forward on its feet, delivering the tea to the customer. Once the teacup is removed, and the doll stops moving. When the emptied teacup is returned to the saucer, the doll turns around and dutifully shuffles back to its original position.

Another well-known mechanical doll is the dangaeri ningyō (stair-walking doll); it can make its way a down series of steps by doing back handsprings. The doll’s center of gravity shifts as mercury moves around an interior chamber. This causes the doll to flip end over end. Meanwhile, the shinatama ningyō (magician doll) was designed to perform a simple parlor trick: A young child dressed in Chinese-style clothing lifts and lowers a box, each time revealing a different surprise within.

These mechanical dolls are grouped under the category of zashiki (tatami room) karakuri—small mechanical dolls often used in the home as a popular amusement at parties or during festivals. This type of doll won admiration from people across every layer of Edo society, from daimyōs and members of the imperial court to the merchant class and even commoners.

The dolls began to fall out of fashion, however, around the time of the Meiji Restoration (1868) and thereafter. In recent years, though, there has been a revival of zashiki karakuri dolls. Stories about the dolls have appeared in science magazines and other publications, helping to spark interest among a new generation encountering them for the first time.

Han’ya Harumitsu, who has dedicated himself to building and restoring these mechanical dolls, sees a fundamental link between the Edo period dolls and contemporary Japanese technologies, as he explains: “The way that these dolls employ gears and other clever techniques to control and redirect the clockwork motion has something in common with how modern robots are directed by computer programs.” 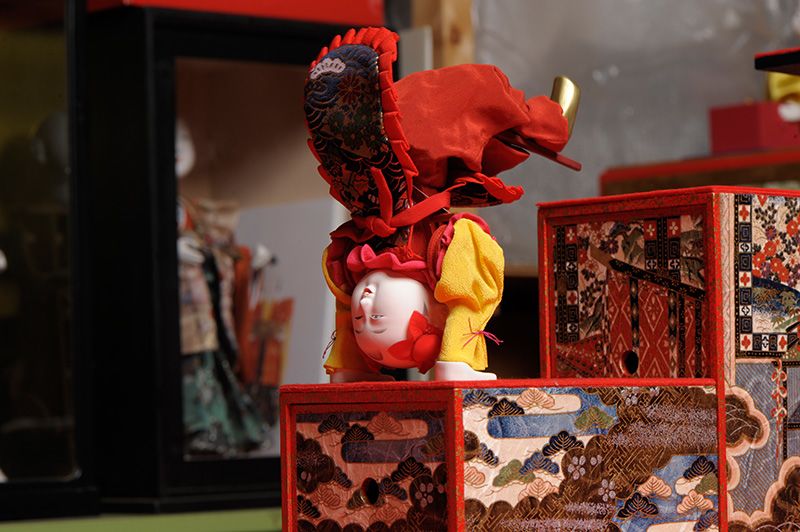 The stair-walking doll somersaults its way down several steps.

The Brains Behind Edo Period Devices 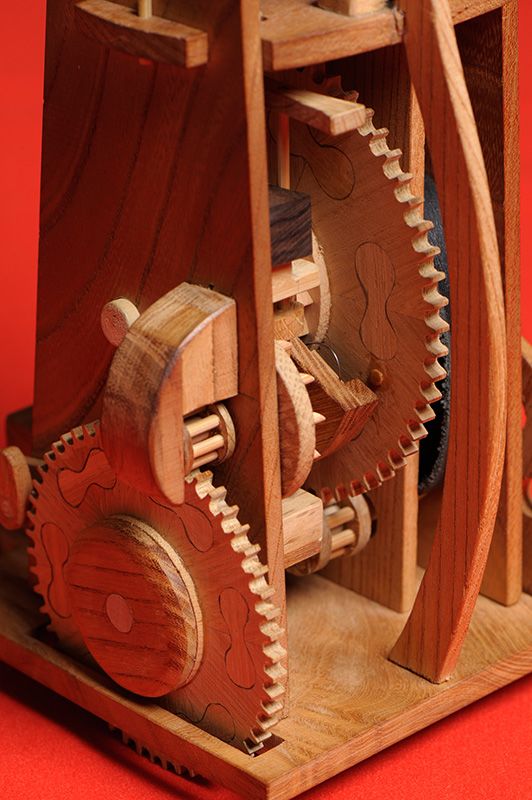 The gears of the clockwork inside karakuri ningyō are carved from wood, rather than using metal. If the grain on the wooden gears is aligned poorly, the teeth can break off, so instead of carving the teeth directly into the gears, tiny wooden triangles are affixed to the wooden wheels—a technique adapted from traditional Japanese handicrafts.

The clockwork that powers karakuri ningyō and Japanese clocks was based on the time pieces that arrived on Western ships near the end of the Muromachi period (1333–1568), alongside other foreign technologies such as steel cannons. After Japan closed itself off from the outside world during the Edo period, the country developed and refined its own homegrown mechanical technologies through the imagination and technical artistry of successive generations of craftsmen.

The original tea-serving doll was one of the many mechanical dolls built by seventeenth century watch-maker Takeda Kiyofusa. The techniques he and his contemporaries used were closely guarded secrets, passed on from master to apprentice like ancient mysteries. Many of those secrets were revealed in 1796 when Hosokawa Hanzō, better known as “Karakuri Hanzō,” published his book Karakuri zui (Illustrated Compendium of Clever Machines), which can be described as Japan’s first text on mechanical engineering.

Hosokawa was a skilled engineer and prolific inventor, dreaming up a whole range of new machines and tools. Based on his belief that the seeds for new ideas are planted by sharing techniques for making things, he dedicated himself to explaining mechanical devices in a simple and accessible way, as Han’ya explains:

“Hosokawa’s book was the impetus for the popularization of mechanical devices during the Edo period. And it is also thanks to the detailed explanations in his book that we have been able to revive those devices in the modern era. It seems to me that the publication of his book is the point of departure for the journey that has led up to Japan’s status today as a pioneer in robotics, fueled by the cutting-edge technologies the country has assimilated since around the time of the Meiji Restoration.” 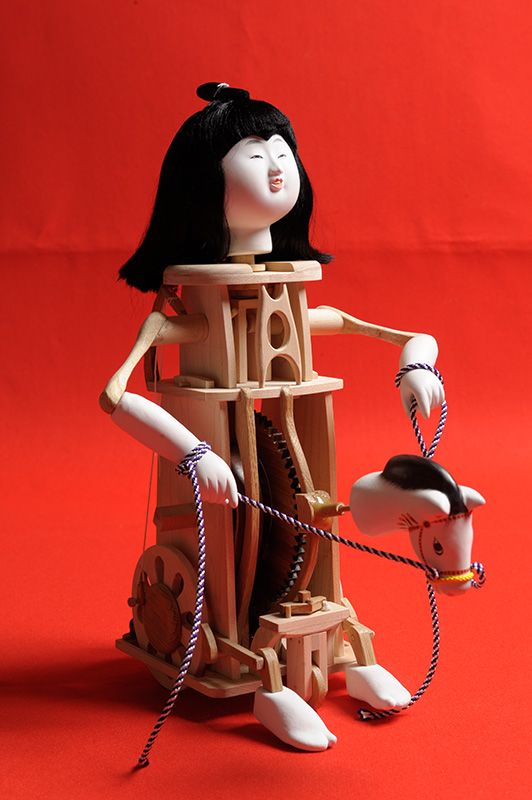 A harukoma ningyō (toy-horse rider doll); as the rider moves, it pulls the reins, swinging the horse’s head from side to side, creating a realistic impression of horse riding.

Expressive faces and fluid, natural movements are the hallmark of karakuri ningyō. The humanity of the dolls and their placid dedication to service, whether offering tea or performing some other function, makes it almost second nature to speak to them directly like a child or pet. “They aren’t simply dolls with moving parts,” Han’ya notes, “but rather constructed in line with a sensibility particular to Japan, making them quite different from the European automata to which they are often compared.”

In contrast to the cold, mechanical impression of an automaton, karakuri ningyō inspire in many people an emotional affinity or even a feeling of love. The dolls seem less like a decoration or toy than something with a heart and life force of its own. The life-like appearance is enhanced by the painstaking work of the craftsmen who paint the faces or make the kimono used to dress the dolls. All of this contributes to the power of the dolls to attract human affection.

In Japan, mechanical dolls were originally religious or spiritual objects, thought to be sacred. But thanks to their broad popularity, the dolls became a source of amusement for the common people. There is a historical connection between the fondness derived from the gentle faces and amenable service of Edo period mechanical dolls, and the attraction that modern Japanese have had for robots in human and animal forms. Indeed, Japan has had a love affair with robots for over two centuries, stretching from the karakuri ningyō to today’s cutting edge technologies.

Han’ya Harumitsu, a karakuri ningyō artisan. After discovering mechanical dolls, he left his job as an industrial technology researcher to dedicate himself to their revival. Recently he has created a complete dramatic production using mechanical dolls.