Science Technology Feb 2, 2017
A Buddhist memorial service was held in July 2016 for AIBO robots developed by Sony, attesting to the depth of affection that the robotic pets have inspired among their owners. For them, these robots were clearly much more than mechanical devices; they were partners in life and deserving of a ceremony for their remembrance and the repose of their “souls.”

AIBO is a dog-like robot that Sony sold from 1999 to 2006. The first AIBO robot was so popular that the 3,000 units produced exclusively for the Japanese market sold out in just 20 minutes, despite carrying a hefty price tag of ¥250,000, with cumulative sales reaching 150,000 units.

The “artificial intelligence robot” has the capacity to move at will and is programmed to express six emotions, such as happiness and sadness. Thanks to the 15 to 20 moving parts (depending on the model), AIBO can not only walk but also sit, stretch, kick a ball, and perform a range of other “tricks.” It can move flexibly like a dog, wag its tail to convey emotion, and even dance in charming ways. AIBO is more of a pet than a toy and has won over the hearts of its owners.

AIBO is a mechanical device, though, so it can break down. Sony had set up a “clinic” to handle AIBO repairs but had to suspend that service because by 2014 spare parts were no longer available. This posed a dilemma for AIBO owners, who were unable to repair their important partner when it malfunctioned. 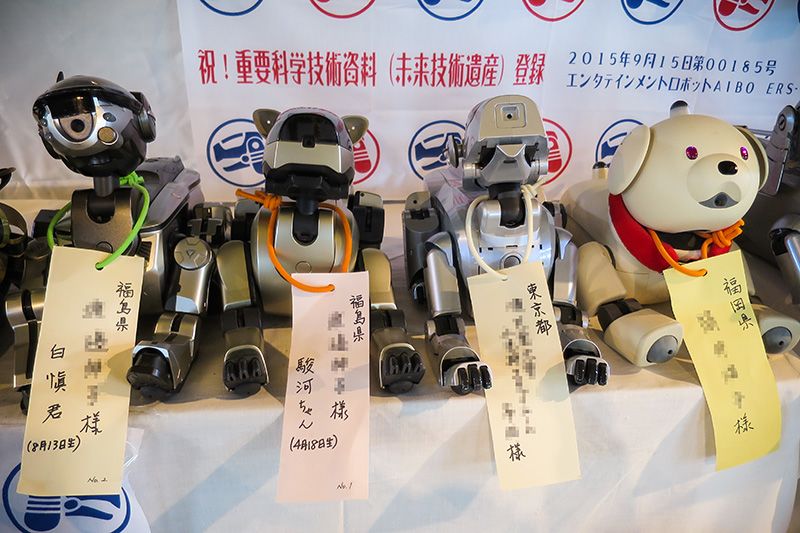 The various AIBO models for which the memorial service was held. (Photograph courtesy of Norimatsu Nobuyuki.)

A Flood of Repair Requests from Around Japan

Former Sony employee Norimatsu Nobuyuki founded the company A-Fun in Narashino, Chiba Prefecture, to repair Sony electronic devices that are no longer covered by the company’s service warranty. Manufacturers are increasingly terminating customer support after a number of years to reduce costs and streamline operations, but Norimatsu, believing that a company should continue to assume responsibility for the products it markets, decided to meet the servicing needs of products that Sony could not repair. His company is staffed with former Sony technicians drawn from across Japan.

One day A-Fun received a request to fix an AIBO robot, but no one at the company had been involved in the development or repair of the robot. It had no parts or design plans on hand, but moved by the passion of the robot’s owner, the company decided to undertake the challenge of repairing it. It took four months to finish the work, but workers managed to get the robot back on its feet. News of this success spread, and orders from around Japan for AIBO repairs began pouring in. To date, the company has repaired 400 robots for AIBO owners. 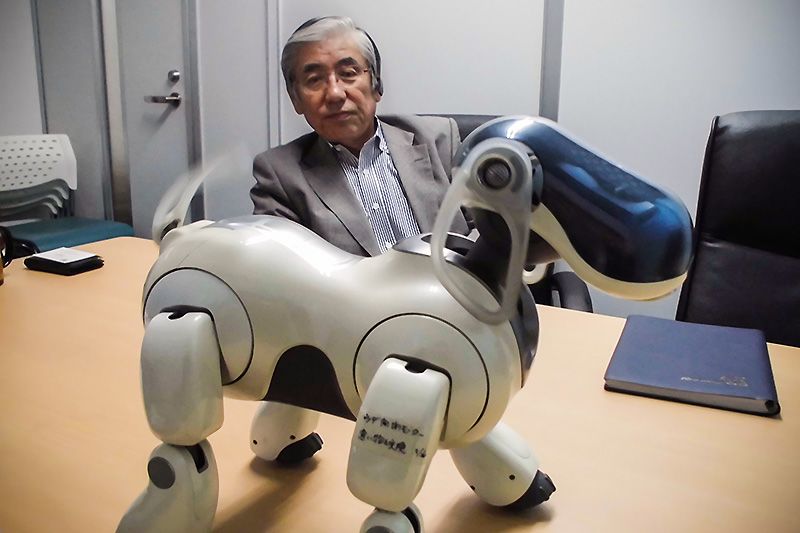 Since Sony no longer makes parts for the robot, A-Fun’s only option was to obtain them by dismantling old AIBO units. Initially, A-Fun relied on Internet auctions, but when people learned that the company was looking for parts, they began donating their robots that had fallen into disrepair. Norimatsu and his colleagues call these units “donor bodies.” The company hesitated to dismantle the AIBO robots that had been treasured by their owners, though, and wished to first “express respect to the robots and offer prayers for the repose of their souls,” Norimatsu explains.

This was not an unusual idea, as tools used by artisans and other personal belongings have long been regarded in Japan as having souls. Large-scale memorial services are held for items that have served their owners for many years, such as sewing needles and dolls. These Buddhist ceremonies are held to allow the “soul” of the object to ascend to heaven so that the owner can dispose of them without lingering emotional attachment. A-Fun decided that it would be fitting to hold memorial ceremonies for donated AIBO robots as well. 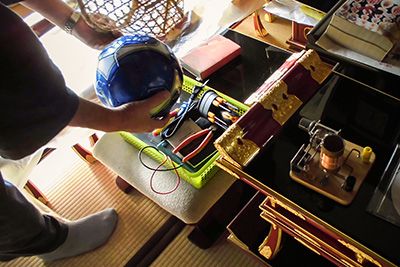 The first such ceremony was held at Kōfuku-ji, a temple in Isumi, Chiba Prefecture, in January 2015. The head priest of the temple, Ōi Fumihiko, was a mechanically inclined radio enthusiast in his youth, so he was intrigued by the idea of holding a ceremony when the idea was floated to him by Kanbara Ikuhiro, an A-Fun engineer living nearby. The service was held for 17 AIBO units, but thanks to media coverage of the event the number increased for three subsequent ceremonies. At first, Ōi decorated the altar with offerings of flowers and fruit, as in a typical Buddhist ceremony, but later included such tools as pliers, wire clippers, and circuit testers that he thought might be more appropriate. At the fourth ceremony, Buddhist sutras were chanted not by Ōi but by an AIBO that had been programmed by A-Fun engineers to perform this task. Ōi says with a laugh that he was “astonished” by this feat. The number of robots involved in each memorial service has risen steadily, and that Norimatsu plans to organize the next ceremony “once we’ve gathered together around 150 robots.” 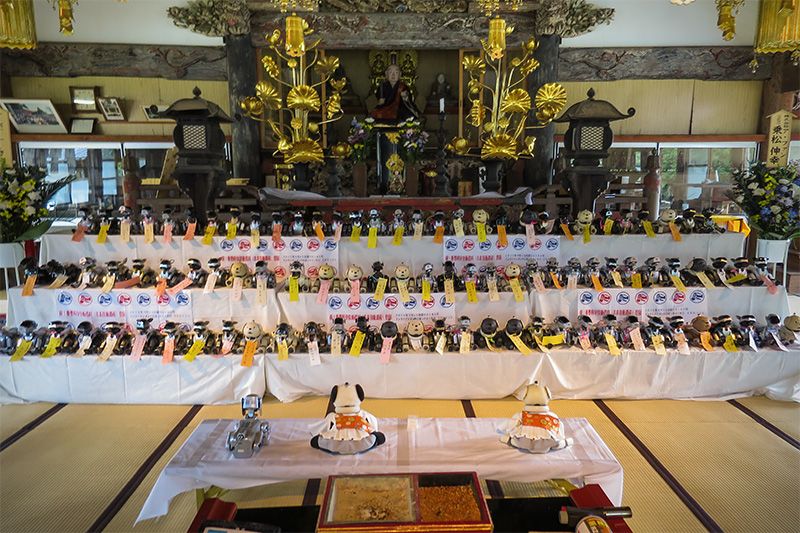 The AIBO robots lined up for the July 2016 memorial ceremony at Kōfuku-ji. The three robots in the foreground were programmed to recite Buddhist sutras. (Photograph courtesy of Norimatsu Nobuyuki).

A Mirror for Human Emotions

Why has AIBO been able to win over people’s hearts to such an extent? Norimatsu thinks the answer lies in the fact that AIBO is “disobedient.” Many personal robots being developed today to support people’s lives are programmed from the start to act as servants for human masters. AIBO, in contrast, at first does not follow the owner’s orders, but because the robot has the capacity to learn, it gradually changes its behavior over the years in response to the owner’s expectations. The affection owners feel for their AIBO naturally grows, as if the robots were their own children. The advanced technology that makes the robot move with dog-like motions no doubt enhances such affection.

Ōi points out that “even though AIBO is a machine and doesn’t have feelings, it acts as a mirror for human emotions.” Performing the AIBO memorial services, he says, has given him a fuller understanding of the Buddhist teaching that all things—including inanimate objects—have the Buddha nature and can thus attain nirvana. This doctrine has been embraced particularly widely by the Japanese, who have pursued a lifestyle of coexistence with nature.

“Living creatures and inanimate objects are all connected,” Ōi explains, “and what links them together is human sensitivity. The affection owners feel for the AIBO robot is a reflection of that sensitivity.” The emotions they shower on the AIBO are mirrored back to the owners, enabling them to see themselves through the robot. It is only natural, therefore, that affection should grow. 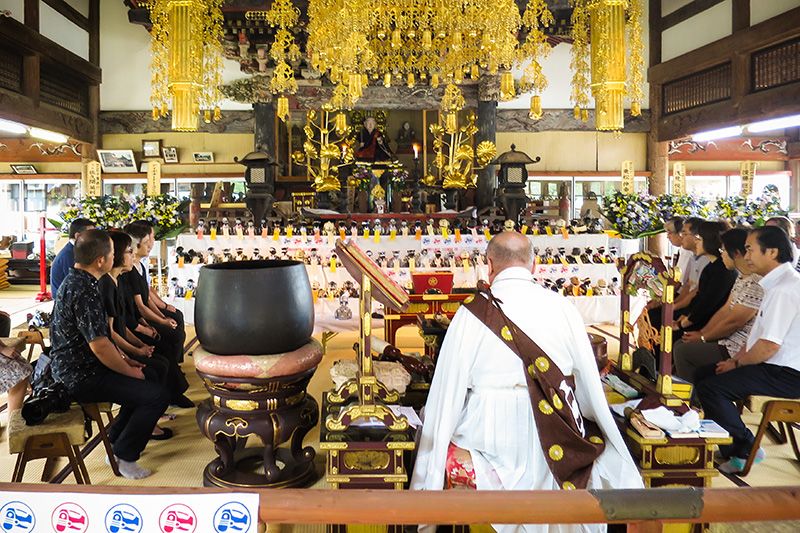 A New Generation of AIBO Robots?

In September 2015, the National Museum of Science and Nature, Tokyo, selected AIBO for inclusion in the category of “essential historical materials for science and technology” (future technology heritage). Since starting repairs of AIBO, Norimatsu has been amazed by the high technical level of the robots, despite being produced a quarter century ago, and this has made him keenly aware of the need to preserve the technology for future generations. Norimatsu also believes that AIBO is well-suited to “robot therapy” at nursing home facilities since, unlike a real pet, there are no sanitation concerns. Toward that end, he is keen to continue his work on repairing and maintaining AIBO robots, and would also like to see more people being trained as robot therapists. He has launched joint studies with other researchers toward these goals.

The original developers of AIBO also seem to have a strong attachment to the robot, and they still gather every year on the launch date to celebrate AIBO’s “birthday.” Norimatsu hopes to attend the next meeting and to propose that they consider relaunching the AIBO. Sony has in fact announced plans to reenter the robot market. A next-generation AIBO model may become an even better partner for their human owners. 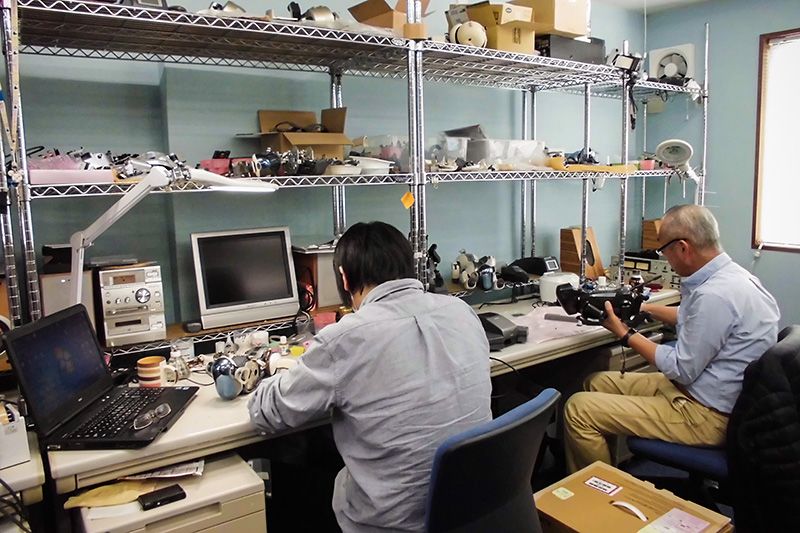 (Originally published in Japanese and published on January 9, 2016. Text and photographs by Satō Narumi. Banner photograph courtesy of Norimatsu Nobuyuki.)