Japan’s Writers in the Spotlight

Ōe Kenzaburō, the Salon du Livre, and Me!

Culture Lifestyle Jun 26, 2012
When manga artist J. P. Nishi was invited to the prestigious Salon du Livre in Paris, he found himself rubbing shoulders with literary giants, including Nobel Prize–winner Ōe Kenzaburō. Nishi shares his experience at one of the world’s largest literary events in this illustrated journal and interview. 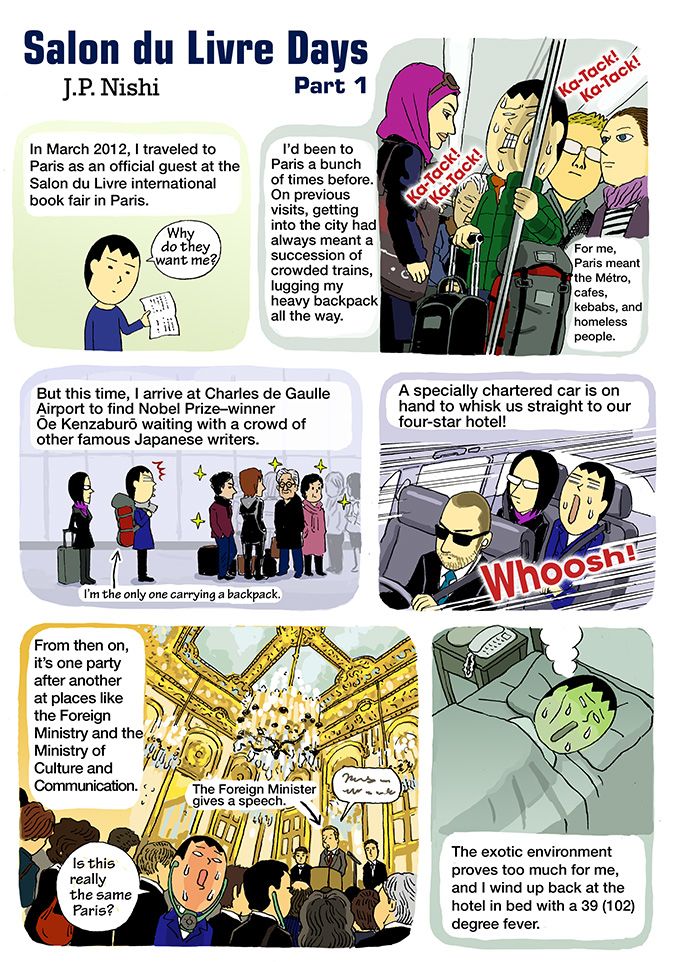 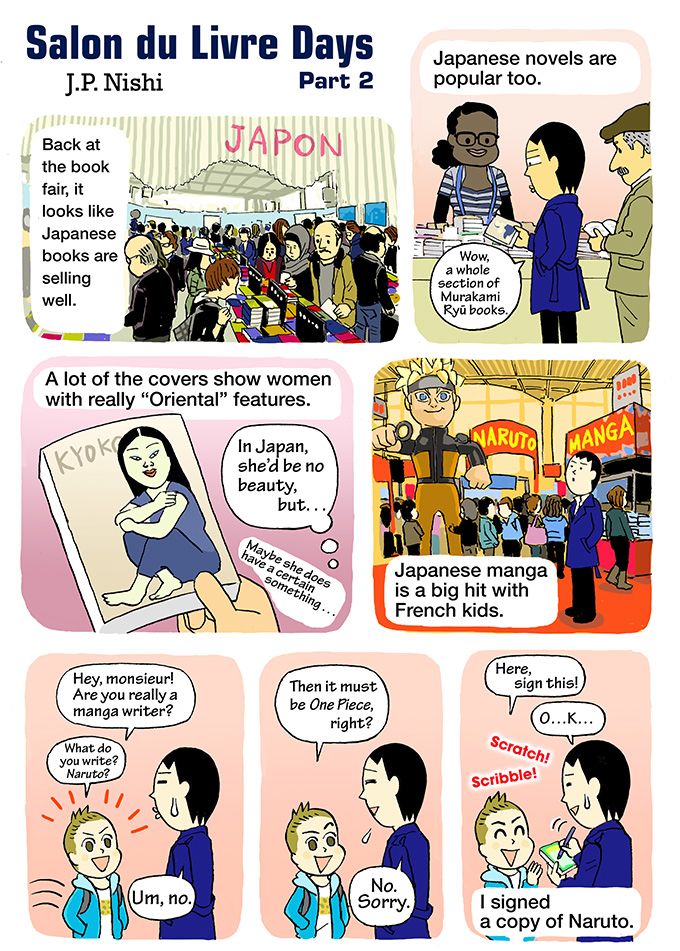 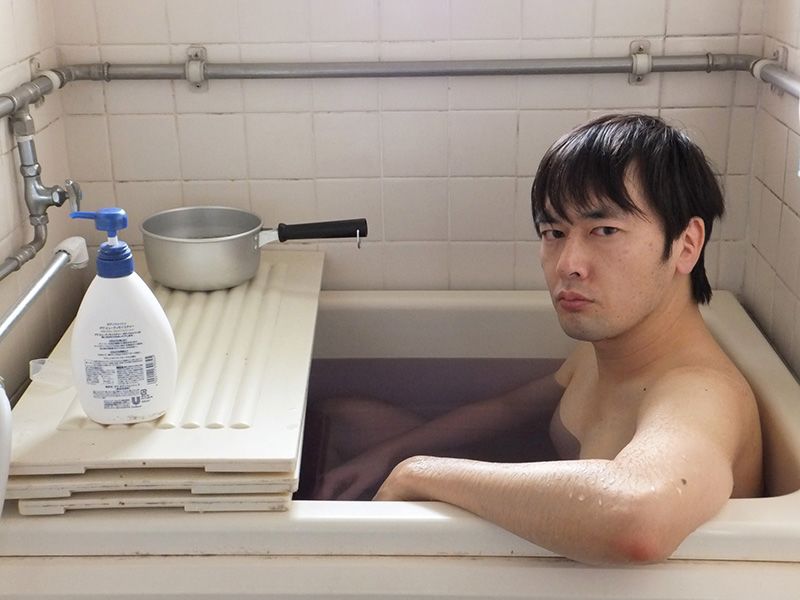 J. P. Nishi (Nishimura Taku)
J. P. Nishi’s first manga, Space Pirates, debuted in 2002 in the bi-monthly manga magazine Young Magazine Uppers. An essay-style manga based on a year in Paris on a working holiday visa ran in the women’s manga monthly Office You from 2006 to 2009.
His next work Pari, Ai shiteru zē (I Lurve You, Paris), appeared in 2011, and in French translation as A Nous Deux Paris! the following year. He currently writes a weekly comic strip for the French IT news site Clubic.com entitled Live Japon. 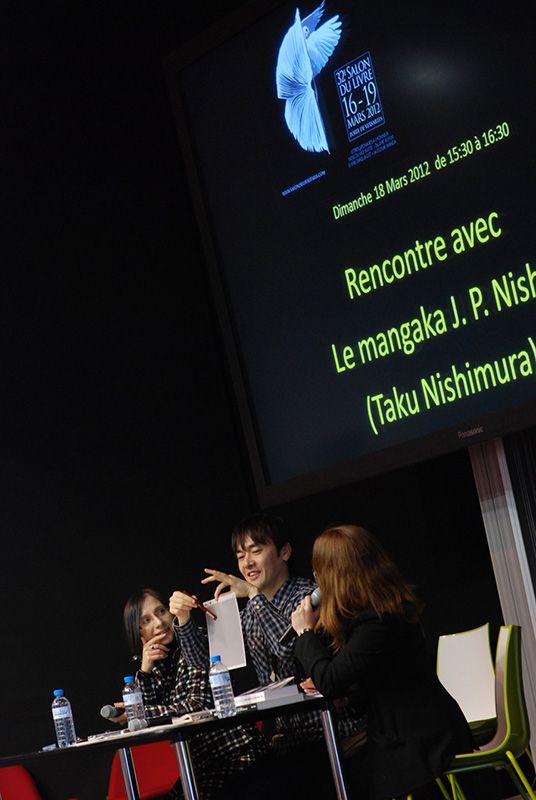 INTERVIEWER You’ve been to Paris many times before, but this was your first visit as an official guest. How much difference did that make?

J. P. NISHI This time, there were chartered limousines at Charles de Gaulle Airport waiting to whisk us to our hotel in Paris. Normally, I take the RER train to the Gare du Nord and change to the Métro there. So I entered Paris from a totally different perspective this time.

Ōe Kenzaburō Refuses to Stand (Or Sit) On Ceremony

INTERVIEWER All the guest writers stayed at the same hotel? Does that include Ōe Kenzaburō as well?

NISHI Right. On the morning of the first day, I was running late and missed the first car to the venue. And there he was in the lobby, just hanging around waiting. I was surprised to see him there on his own. I thought he’d have all these people running around looking after him, as a Nobel Prize winner. But he didn’t seem to mind it at all.

Anyway, my wife and I ended up taking the same car as him to the venue. Since there were two of us traveling together, we would normally have got in the back together, but that didn’t feel right with Mr. Ōe there. I told my wife “It’s OK, I’ll take the passenger seat. You sit in the back with Mr. Ōe.” But he just told us not to worry about it and hopped into the front seat. I really got the impression he didn’t like receiving special treatment.

The same thing happened at the reception at the Japanese Embassy. The dignitaries’ speeches had dragged on for about an hour, and the guest writers were just left standing there for the whole thing. And we were lined up on stage in front of the audience, so we couldn’t relax at all. We just had to stand there motionless the whole time. A few of the writers were older people, too, so it must have been particularly tough for them.

Anyway, eventually the embassy staff realized what was going on, and someone finally brought two chairs over. They offered one of the chairs to Mr. Ōe, but he just shook his head. Not interested. He didn’t want to be the only one sitting down when everyone else was still standing. I was impressed. I was like: Hey, give it to me if he doesn’t want it! Later on, he was happy to chat and joke in English and French with the people around us. Maybe it’s a bit presumptuous of me to say so, but I was impressed by how approachable he was. 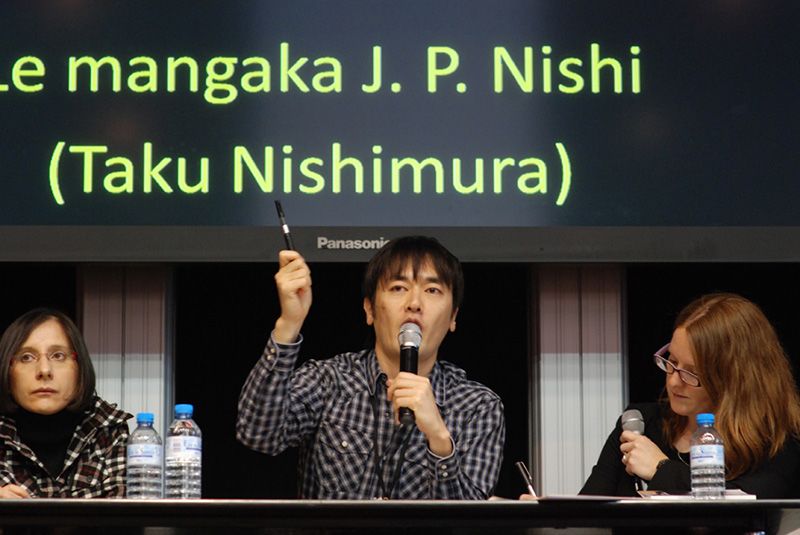 INTERVIEWER Were you there for any of Ōe Kenzaburō’s remarks during the Salon du Livre, which attracted a lot of attention in France and Japan?

NISHI I was there for his dialogue with Kamata Satoshi. When he made his anti-nuclear remarks, the whole audience erupted in cheers and applause. It was a strange moment. What does it mean that so many French people are opposed to nuclear power, even though their country is even more dependent on it than Japan?

To tell the truth, though, my schedule was pretty packed, and I didn’t have a lot of time left over after my own speaking engagements. Aside from the Ōe talk, the only event I managed to catch was the dialogue between Hagio Moto and Shimada Masahiko, which I thought was fascinating. It made me realize how much I love listening to writers talk. A lot of the other events on the program sounded interesting too, but I just didn’t have the time, unfortunately.

There’s No Such Thing as a BD Assistant

INTERVIEWER You have strong ties with France. What made you decide to visit France in the first place?

NISHI In the early 1990s, Japanese translations of French bandes dessinées(*1) (BD) began to appear in Kōdansha’s manga magazines. I became fascinated by these French “manga,” and when I turned 20 I visited France for the first time as a tourist. 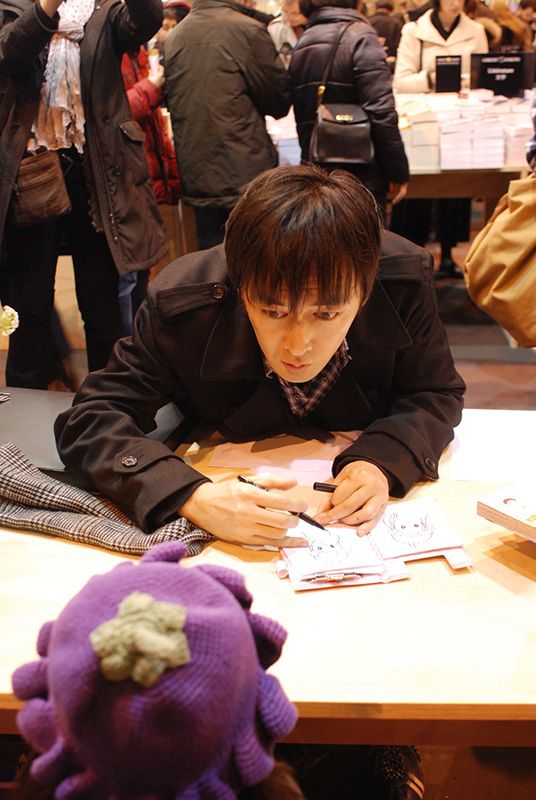 J. P. Nishi sketches a caricature portrait for a fan

That was my formative experience with the country. Later on, when I was already working as a manga artist, I went again and stayed for a year on a working holiday visa. My original plan was to work as an assistant to a bande dessinée writer.

But not long before I was due to leave for France, I had a chance to speak with Frédéric Boilet, a French manga artist who was working in Japan at the time. He told me, “There’s no such thing as a BD assistant.” I was totally despondent and even thought about cancelling my trip altogether. But Boilet told me he thought the trip was a really good idea. “So few Japanese manga artists go to France,” he said. “I really think you should do it.”

So I went. In the end, it was more like a year of regular part-time work. But every day I was there, I had a new experience of some kind. Instead of keeping a journal, I wrote up my experiences as a comic strip. When I came back to Japan I tried pitching a story based on my experiences to various magazines, but there was absolutely no interest. It was only when I showed them my comic strip journal that they saw the potential, and that’s what ended up being my first project after I got back.

After that, the journal gradually branched out to include more or less anything that came to me, including lots of things that have nothing to do with France at all. The essay manga that got me invited to the Salon du Livre was written during this time as well. To hear French people’s reactions firsthand was a real thrill for me. It’s been a wonderful experience. I hope I can keep on writing interesting stuff, in whatever genre it happens to be.

(*1) ^ Bande dessinée (or BD) is the French word for comics from France and Belgium.