Science Technology Jul 5, 2012
The Tokyo Skytree project started in 2006. From the beginning, its creators determined to draw on the oldest Japanese architecture and aesthetics even as they crafted an ultramodern tower befitting the Tokyo skyline of tomorrow.

On February 29, 2012, general contractor Ōbayashi Corp. put the final touches on Tokyo Skytree, completing its construction. The tower stands 634 meters tall, making it the tallest structure in Japan, the second tallest in the world, and the world’s highest free-standing communication tower as of its completion. In all the Skytree took some four years of design work, three years and eight months of construction, and the labor of fully 585,000 people to achieve.

Japan’s previous height champion, the 333-meter Tokyo Tower, was completed in 1958. In sharp contrast to Tokyo Tower’s triangular, broad-based profile, Tokyo Skytree features a more slender silhouette. The complex lines of the thousands of beams making up the structure present different forms to viewers depending on where they stand, making it an intriguing building to observe. How did this form come about? 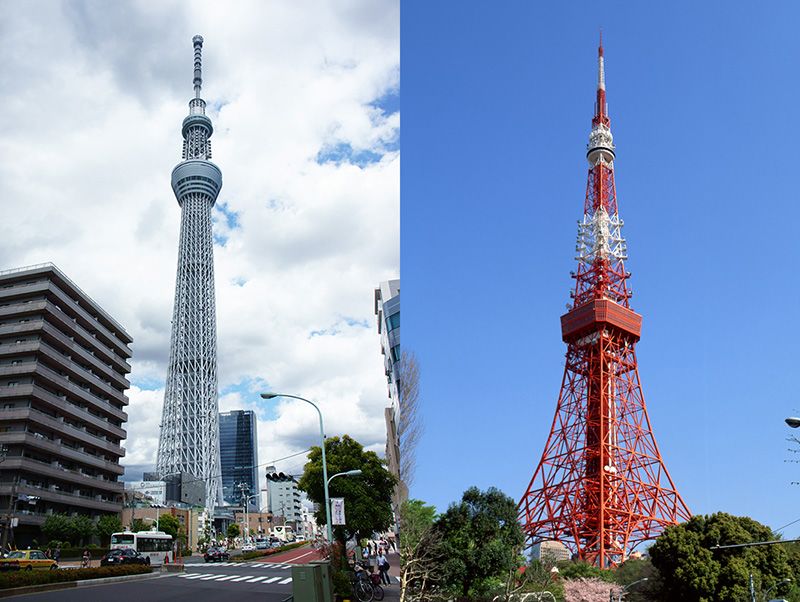 Tokyo Skytree (left) presents a more slender silhouette than Tokyo Tower, with its broad, sloping base.

The Challenge of a Narrow Building Site

The wider a structure is at its base, the easier it is to design it to reach taller heights. A broad-based structure like Tokyo Tower is intrinsically more stable than a tower built on a narrower foundation. To match Tokyo Tower’s height-to-base ratio (333 to 95 meters), though, the 634-meter Skytree would need to be 181 meters wide at its base.

The site where the new tower needed to go up did not offer this sort of space, though. A former freight rail yard, the plot had room only for a square structure 60 meters wide at its base. A circular shape would be limited to the same 60 meters for its diameter at ground level. The designers ended up eking an extra 8 meters of support width out of the site by opting for a triangular base 68 meters on a side. This option was also attractive for taking advantage of the intrinsic stability, even in narrow locations, of the tripod form.

The plot hosting Tokyo Skytree runs just 400 meters east to west and 100 meters north to south at its widest spot.

The design task was further complicated by the need to build circular observation decks farther up the structure, offering visitors 360º views of the city. The designers’ solution was to craft a shape starting from a triangular cross-section at ground level and gradually morphing into a circular tower as it rises. This was the genesis of the uniquely shaped structure, which offers a shifting face to viewers as their gaze travels up it.

In the design phase, architects created some 40 models of the tower. They selected the one that would present the fewest structural challenges in the construction phase, as well as the one featuring arcs and cambers that would provide the most strength. Here the arcs they pursued in particular were like those seen in the traditional Japanese sword—lines bending gradually as they travel toward the end of an object. For the cambers, meanwhile, they took their inspiration from Japan’s ancient temples, looking to the softly swelling rounded forms of the rows of pillars supporting the roofs of Kyoto’s Hōryūji, a temple built in the Nara period (710–94), and the Buddhist structures of the following Heian period (794–1185). Skytree displays these elegant arcs along the ridgelines rising from the corners of its triangular base, forming the cambers as it morphs from a three-sided structure to a circular one farther up. The result is a fascinatingly complex piece of architecture. 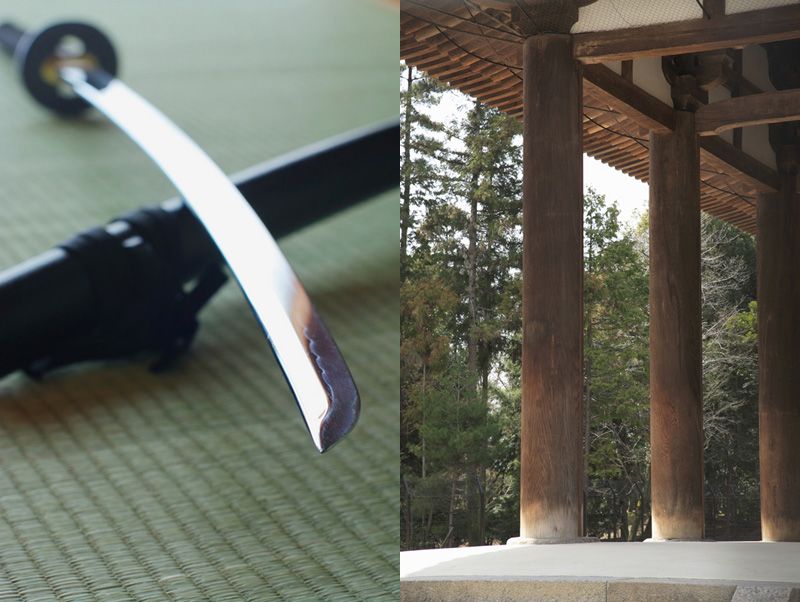 Designers looked to the arc of the sword and the camber of temple pillars in conceiving the Skytree shape.

Another aspect of the ultramodern Tokyo Skytree that is nothing new is the shinbashira—the “core pillar” found in the classical five-storied pagoda. From ancient times these surprisingly sturdy wooden structures relied on the shinbashira to absorb the impact of earthquakes and keep them standing tall.

There are almost no historical records of a multistoried pagoda toppling in a temblor. A major reason for the pagoda’s quake resistance is the central pillar, which stands freely at the structure’s center and swings like a pendulum to dampen the horizontal impulse an earthquake delivers to the tower.

Tokyo Skytree is perhaps the first modern building to draw on this design idea and make use of a shinbashira for earthquake resistance. At the center of the tower stands a 375-meter steel-reinforced cylinder, fully 8 meters across and weighing 11,000 metric tons. The bottom third of this cylinder—up to 125 meters—is fixed solidly to the surrounding structure. In its upper two-thirds, meanwhile, up to its full height of 375 meters, it is not welded to the tower. The unattached portion of the shinbashira can swing freely, its movement absorbed by oil dampers between it and the surrounding beams. When an earthquake brings horizontal shaking, the shinbashira sways at a different frequency from that of the tower, counteracting the shaking and bringing the structure back to a stable state. This construction can reduce lateral motion by up to 50%.

The shinbashira was put to the test before Tokyo Skytree was even finished. When the Great East Japan Earthquake struck on March 11, 2011, the tower was still under construction, but the shake-reduction technology worked as planned, and all construction staff members on site were safe that day. The structure was also unscathed, and just a week later, on March 18, workers affixed the lightning rod to the top of the tower, bringing it to its full height of 634 meters. 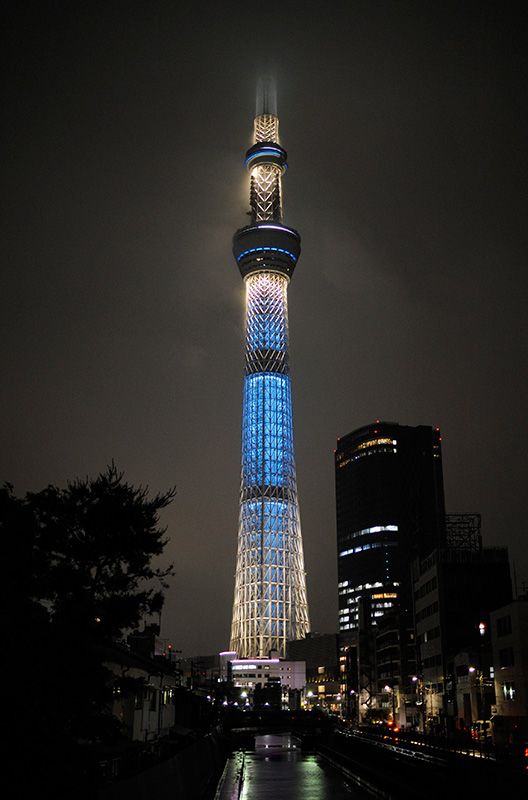 The March 11 disaster did delay final completion of Tokyo Skytree, originally scheduled for the end of that year, by some two months. When it finally opened its doors to visitors on May 22, 2012, the building thrust its apex into an unfortunately rainy sky. This did not deter some 220,000 people from flocking to the building on its first day of operation, though.

After dusk on that first day, viewers were treated to the sight of the tower illuminated in colors inspired by tradition: a blue labeled iki, or the stylish approach to life taken by residents of old Edo, symbolizing the purity of spirit shown by the area’s residents since the Edo period (1603–1868) and the Sumida River flowing nearby; and a pale lavender called miyabi, or refined elegance, representing the aesthetic sense underpinning the new high point of Tokyo’s skyline. These two colors blended softly in the lights illuminating the tower on its first night. And on the following day, the clouds lifted to show a daytime Skytree tinted aijiro—the palest possible color achieved through indigo dying—pointing toward a brilliant blue sky.

Tōbu Railway Co., Skytree’s owner, states that it set out from the beginning of this project to achieve “the creation of city scenery transcending time.” Tokyo Skytree accomplishes just this, drawing on some of Japan’s oldest architectural ideas to stand as a futuristic part of the capital’s skyline.