Culture Lifestyle Apr 8, 2014
Although wine consumption and production is on the rise in Japan, it’s still nowhere near the level in Europe or the United States. But women may hold the key to fostering Japan’s wine culture. And a new, all-female wine-tasting competition is aiming to leverage the power of wine-loving women. 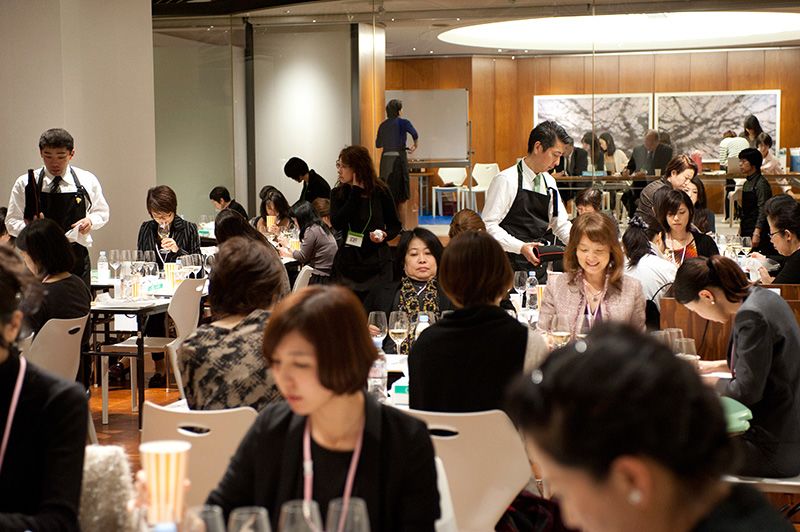 The women seated in the event room wore studious expressions, tilting the contents of their wine glasses and jotting down tasting notes, while male sommeliers wound their way in between their tables to pour wine from bottles with concealed labels.

That was the scene in early February, 2014, at the Sakura Japan Women’s Wine Awards held in the Terratoria event space of Terrada Warehouse Co., Ltd., in Tokyo’s Shinagawa district. The international wine-tasting competition was the first in Japan—and one of the few in the world—to feature an all-female panel of judges.

During the four-day event, 1,922 different wines from 29 countries were sampled by 240 women judges, all of whom were wine connoisseurs, including trained sommeliers, journalists for wine-related publications, and wine producers or dealers. 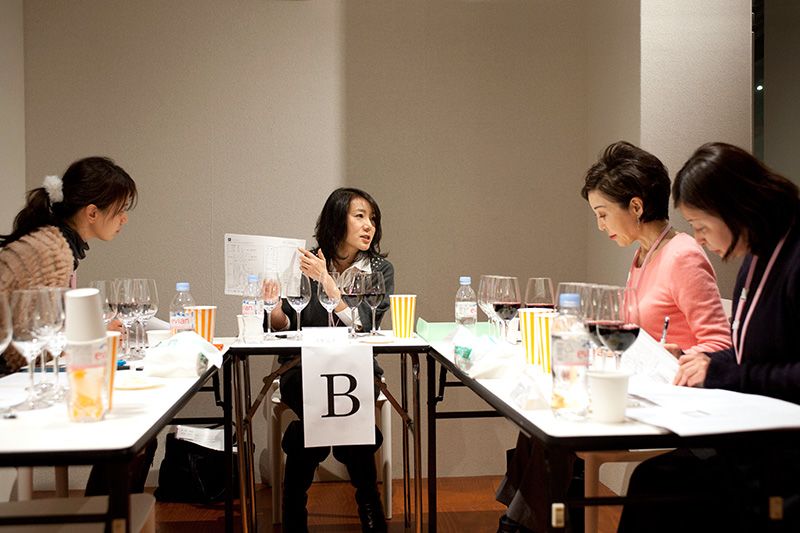 “I’ve participated in wine tastings before, but those events always included men,” says Kawahara Yōko, one of the judges. “This was the first time for me to judge wines only with other women.”

Kawahara, who works for an importer of Argentine wines, points out some of the unique aspects of the all-female event: “Unlike other tastings, where wines are mainly evaluated on the basis of their tannins, astringency, and the like, this event also considered criteria of particular importance to women, such as whether a wine might be suited to an informal gathering of women or would make an appropriate present for a female friend.”

More and more Japanese are drinking wine these days, but their annual per-capita consumption still only averages 3 liters—as compared to traditional wine-drinking countries like France and Italy, where the annual average in 2009 was between 40 and 50 liters according to the International Organization of Vine and Wine. And the Japanese average is also quite low compared to the 8.9-liter average in the United States, a formidable wine-producer in its own right.

Tanabe Yumi is the daughter of Marutani Kaneyasu, the founder of Tokachi Wine and former mayor of Ikeda, Hokkaidō. After graduating from Tsuda College with a degree in mathematics, she studied at the Cornell School of Hotel Administration in the United States and in 1986 founded a comprehensive wine-consulting firm in Tokyo named Wine & Wine Culture Co., Ltd. Has headed her own wine school since 1992. She was awarded France’s Medal of Chevalier of the Order of Agricultural Merit in 2009. Since 2011, she has chaired the Wine and Spirits Culture Association.

Boosting the popularity of wine among women may be the key to expanding Japan’s overall level of wine consumption. Men tend to be the ones who decide which wine to buy in European or American households, whereas in Japan the “main purchasers of wine are women in their thirties to fifties,” points out Tanabe Yumi, the head judge and founder of the Sakura Japan Women’s Wine Awards.

The wine school that Tanabe has been running for the past 21 years has trained over 10,000 wine specialists, who have gone on to work as sommeliers or be active in other wine-related areas. Along with her hope that women will drive wine consumption in Japan, she is determined to help create more opportunities for women in the wine industry. Even though there are around 8,000 female sommeliers in Japan, making up 47% of the total number, Tanabe says that their scope of activity remains limited.

And this problem is not unique to Japan, as Tanabe explains. “The European and American wine industries are also quite conservative. Only in recent years have we begun to finally see increasing numbers of female sommeliers and wine producers.”

Tanabe’s aim in starting the Sakura Awards was for the annual event to help broaden the activities of female wine experts, thereby energizing the industry as a whole and increasing wine consumption to the point where wine becomes a part of daily life in Japan.

“Male judges of wine do not tend to be aware of the everyday perspective of women when it comes to a wine, such as whether it might go well with the sashimi served that night,” Tanabe observes. “For our event next year I would also like to see a lot of high-quality but reasonably priced wines entered, between 2,000 and 5,000 yen.” 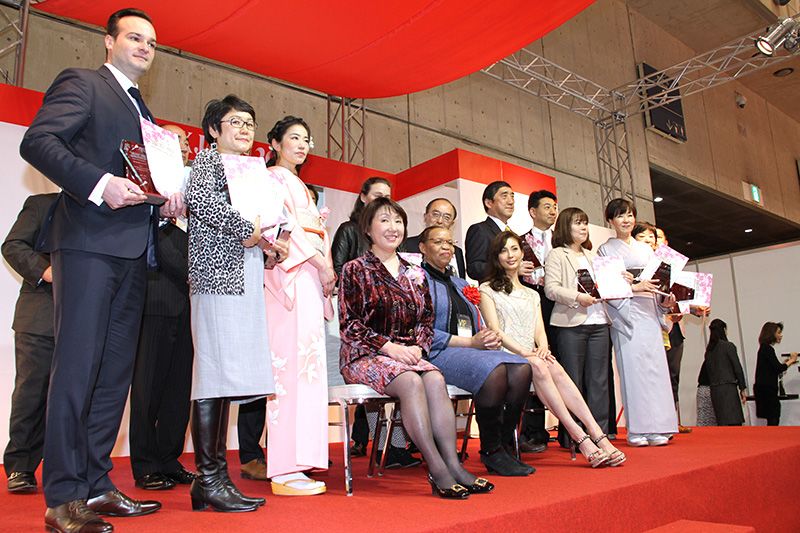 Presentation of the Sakura Awards winners at the March 4 Foodex Japan exhibition. 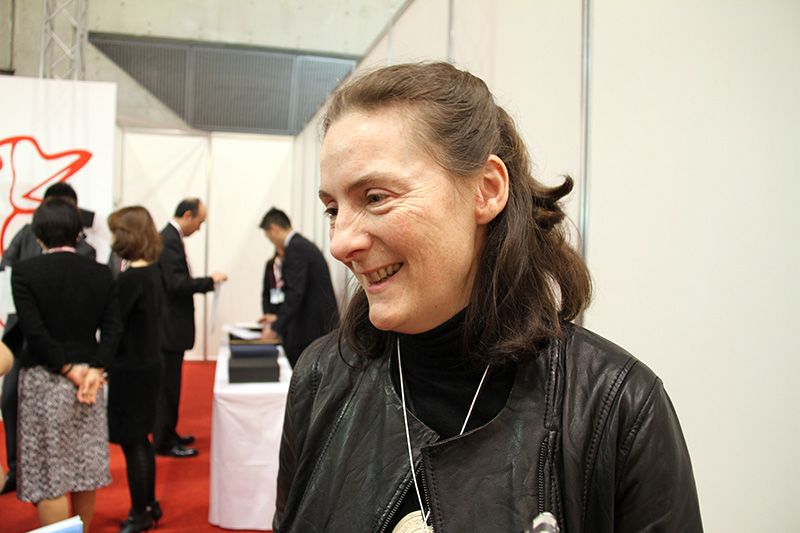 Claire Naudin, winner of the “Best Wine Produced by a Woman Winemaker” award.

The ceremony to announce the Diamond Trophy and special prize winners was held on March 4 at Foodex Japan 2014, an international food and beverage exhibition. The Best Wine Produced by a Woman Winemaker award went to Claire Naudin, a Frenchwoman who flew to Japan to attend the ceremony. Naudin took over her father’s winery in 1994, and in recent years her focus has been to reduce the amount of additives to a minimum in order to bring out the natural flavor of a wine. Her prize-winning product was Bourgogne Hautes-Côtes de Beaune, a crisp-tasting white wine.

As Naudin points out, France has its own female-only wine-tasting contest targeting women who love wine. “Our ‘Féminalise’ competition, which only involves French wines, got started five or six years ago. It was a modest affair at first, but now around a thousand women participate in it every year, and its network is expanding,” she explains. “Winning a Sakura award is a great source of motivation. I feel like a young woman again. Thanks to the award I feel like I have the energy needed to keep working at the never-ending task of improving our wine-making process.”

Even though Japan is a relative newcomer to wine production, there are already wineries throughout the country. For the Sakura Awards, 150 Japanese wines were entered. Even though none of these entries captured the Diamond Trophy, a sparkling wine made with Kōshū grapes, named Huggy Spark, won the Gold Prize and was selected by the judges as the Best Japanese Wine.

Tanabe says Japanese wines, while steadily improving, still have far to go to rank alongside European wines. “It is clear that Japanese wine producers have been working hard. But more time will be needed to catch up to the quality and flavor of European wines that stems from a tradition developed over more than two millennia. It would be counterproductive for us to heap too much praise on Japanese wines when there is still so much room for improvement. The Japanese media are exaggerating when they say that our domestic wines are holding their own with wines overseas. Making a fine wine is not such a simple proposition.”

Tanabe’s high standards stem from her own experience from a young age of the wine-making process as the daughter of Marutani Kaneyasu, the founder of Tokachi Wine.

“Around fifty years have passed since the founding of Tokachi Wine, which was one of the pioneering efforts in Japan to produce wine domestically. From the time I was a young girl, I saw how much back-breaking work was involved—from the cultivation of grapes to final bottling—to produce a wine in a cold climate like that of Hokkaidō. So I think I am better aware than most of just how difficult it is to make wine in places like Yamanashi, Nagano, or Yamagata Prefectures. I want to do whatever I can to support those domestic winemakers. And that is precisely why I hope that they stick to their hard work, without being too swayed by what the media is saying or by short-term trends.”

Restaurants Can Learn from Japanese Women

Tanabe’s vision for the Sakura Awards is that within five or six years it will begin to foster ways for women to contribute in their own unique ways to energizing the wine industry. In particular, she would like to see women help to raise the profile of rosé wines. 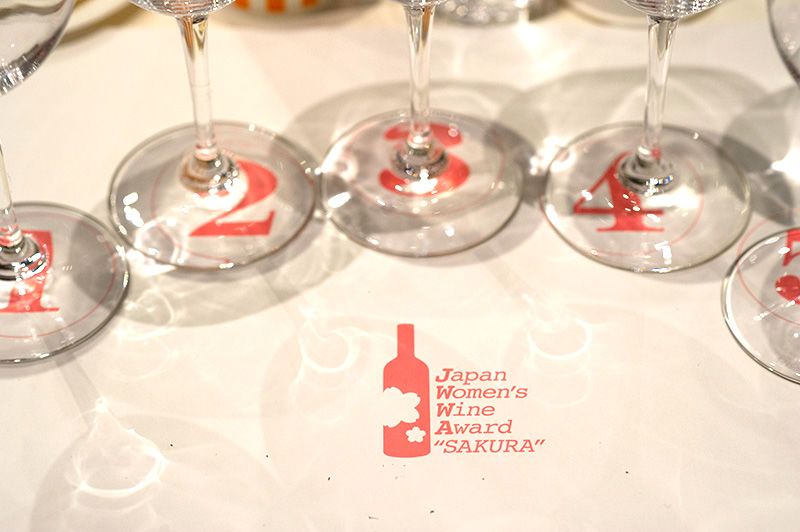 “Professional wine buyers are generally men, who tend to be short on ideas for how to promote a rosé. I would be thrilled if our competition over time helps to raise the consumption of rosé wines significantly.”

The special prize for a wine that goes well with washoku, particularly sushi, was the Marrenon Petula Rose 2012 produced in the south of France. “It’s important for wine and food to complement each other,” Tanabe explains. “A person needs to be aware of whether a particular wine might go well with this sushi dish, for example, or what sushi dish might suit a particular wine. And, when it comes to sushi, I think that many rosé wines fit the bill perfectly, because they are crisp and refreshing. I want to share with sushi restaurants around the world the views of Japanese women on what wines go well with sushi.”

The Sakura Awards seems poised to serve as the forum in the years to come for conveying those views of Japan’s female wine connoisseurs to the rest of the world.

The 2014 event had 1,922 entries from 29 countries, representing 50 different styles of wine. The judges for the four-day competition tasted around 40 to 50 wines per day, served from bottles with concealed labels, and then assigned each a score of up to 100 points. On the basis of those scores, silver, gold, or double-gold prizes were awarded. The highest award, the Diamond Trophy, was awarded to 20 of the 96 double-gold prize winners. Details on the competition can be found on the Sakura Awards website.