Sushi Chef Aoki Toshikatsu: At the Crossroads of Tradition and Innovation

Food and Drink Lifestyle Culture Aug 12, 2014
Sushi aficionados expect more than just top-quality ingredients when they dine in Ginza. They expect a relentless attention to detail combined with the kind of effortless class that cannot be faked. Sushi Chef Aoki Toshikatsu, second-generation proprietor of Sushi Aoki, personifies these attributes. Nakahara Ippo profiles the master chef and his reverential yet inspired cuisine. 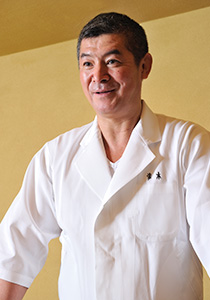 Second-generation chef-owner of Sushi Aoki. Born in Saitama Prefecture. After graduating from Nippon Sport Science University, spent one year traveling in the United States. Worked at the famous Kyōbashi sushi restaurant Yoshino before embarking on advanced training under his father, one of Tokyo’s great sushi chefs. Took over Sushi Aoki at age 28, following his father’s unexpected death. 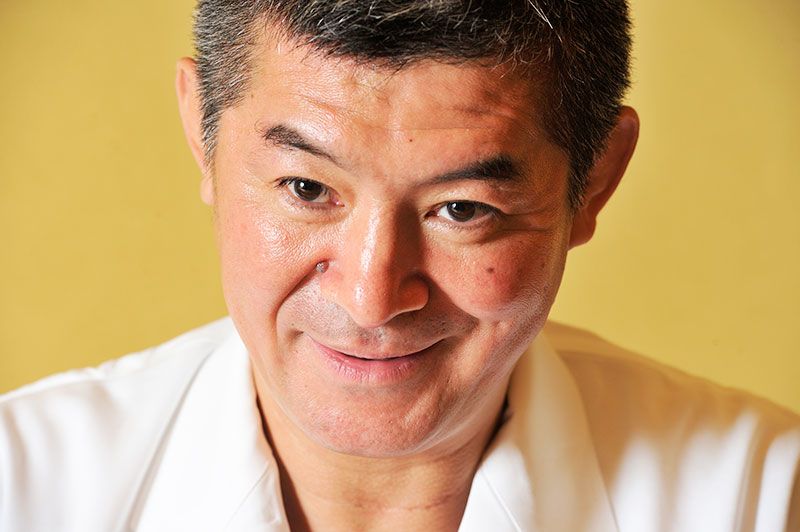 Aoki Toshikatsu cuts a fine figure behind the sushi bar, thanks in part to his impressive athletic physique (the product, he says, of his college judo training). Just the sight of him standing there in his white chef’s jacket behind the wooden cutting board is enough to inspire customers with total confidence. It seems to tell them they can leave everything to him, with no doubt that they will be served something good.

Aoki’s sushi is clean and elegant in style, yet infused with a playful gallantry, like a father showing off for his family. The boyish grin the master flashes from time to time is part and parcel of his low-key charisma.

Edomae (Edo-style) sushi is one of Tokyo’s great contributions to world cuisine. Aoki’s first bite of sushi was prepared by his own father Yoshi, who opened and built the business that his son would eventually inherit.

Raised in the old Asakusa section of Tokyo, Aoki Yoshi trained for 20 years at the famed Nakata restaurant in Ginza before he was finally permitted to open his own branch in the Kiyamachi district of Kyoto. In a city of notoriously fussy diners, he made a name for himself as a master Edomae chef.

This was at a time when restaurants explicitly devoted to Edomae sushi were practically nonexistent in Kyoto. Insulating materials like polystyrene foam were not yet in wide use, so bluefin tuna (hon-maguro), a staple of Edomae, had to be shipped in crates packed with ice and sawdust from Tokyo’s Tsukiji fish market, a full day’s journey away. Yet sometimes all that effort was wasted on his customers, who favored the delicate flavors of traditional Kyoto cuisine and regarded maguro—whether the lean akami or the fatty toro—as inferior to white fish like Akashi tai, or sea bream. “I think my father had a hard time indeed with the maguro problem when he was in Kyoto,” says Aoki Toshikatsu. 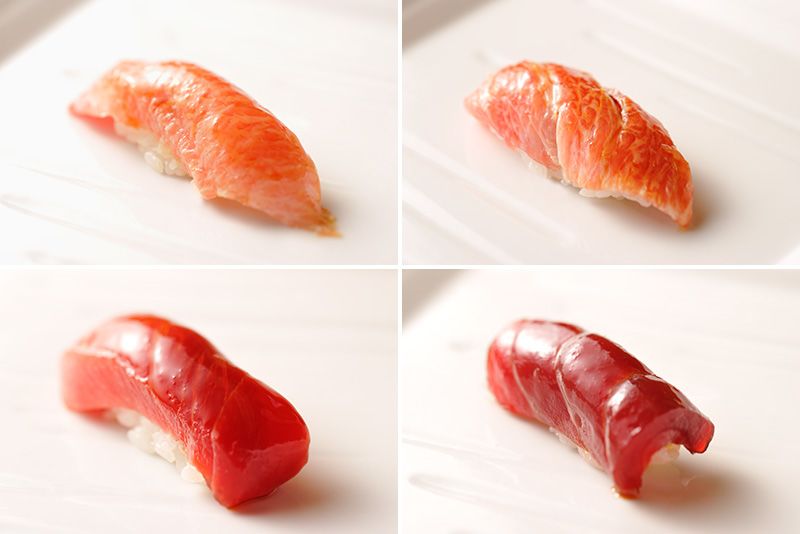 Sushi Aoki showcases four different cuts of bluefin tuna. Above, from left, are two cuts of fatty toro: the marbled shimofuri and jabara, or “snake’s belly.” Below are medium-fatty chūtoro (left) and lean akami marinated in soy sauce.

For his part, Aoki grew up thinking of his father’s workplace as a kind of playground. He loved hanging around on weekends and school holidays, helping the kitchen staff with prep work.

In 1986, after spending 14 years building a reputation for himself in Kyoto, Aoki’s father moved back to Tokyo and opened his namesake restaurant in the Kōjimachi district of Tokyo. Sushi Aoki traces its beginnings to that establishment.

After high school, the younger Aoki attended Nippon Sport Science University, then spent a year in the United States, immersing himself in the English language and exploring the diverse food culture of a multiethnic society as he traveled from coast to coast.

Sushi was already a familiar “fast food” to many Americans, but the sushi Aoki encountered in the United States was a far cry from the authentic Edomae he had grown up with. Distinctively American creations like the California roll (avocado, cucumber, and real or artificial crabmeat) and the spider roll (soft-shell crab) were all the rage. Aoki saw sushi eaten with mayonnaise or teriyaki sauce instead of soy sauce and washed down with cola instead of tea. Meanwhile, American cooking was feeling the impact of France’s nouvelle cuisine, with its emphasis on light, vibrant dishes highlighting fresh and exotic ingredients. Aoki’s first encounter with a white fish carpaccio drizzled with balsamic vinegar was such a revelation that he had to call his father long distance to tell him about it.

Aoki’s American sojourn exposed him to the notion of sushi as an evolving international phenomenon and awakened him to its creative possibilities. This awareness would later come to fruition in such original East-meets-West creations as Aoki’s famous monkfish liver and baby scallions wrapped in rice and flavored with ponzu (soy and citrus sauce), one of the few dishes in the sushi repertoire that can be paired with red wine.

After returning to Japan, Aoki first apprenticed at Yoshino in Kyōbashi for several years. He then began perfecting his craft under his father’s tutelage, working at the restaurant Yoshi had just opened in Ginza. Months later, his father succumbed to illness. Aoki was just 28.

Aoki had mastered the basics of Edomae by this point, but he felt woefully unprepared to fill his father’s shoes.  On several occasions he watched his sushi fall apart as he placed it in front of a customer.

But in Ginza, Aoki had the good fortune to be surrounded by a new generation of sushi chefs who had challenged the traditional pecking order and clawed their way to the top by dint of sheer talent and individual effort. Among these was Niitsu Takeaki, the legendary Kiyota chef who had achieved fame for his craft at a young age. He and Aoki’s faithful regulars supplied valuable feedback, letting him know whenever his sushi was below par. That was when Aoki’s advanced training began in earnest. 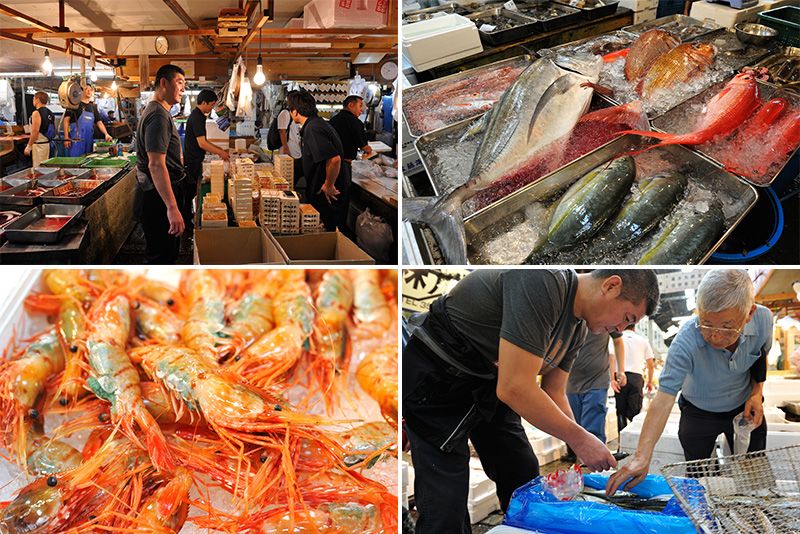 Aoki picks out fresh fish at the Tsukiji fish market, as he does every morning.

That was two decades ago.  Aoki has long since established himself as a master in his own right and one of the preeminent sushi chefs of our time. His mother, who has managed the shop for decades, pays him the ultimate tribute by saying his sushi is “equal to his father’s in every way.” His mission now is to train a new generation, passing down the tangible and intangible assets he inherited from his father. 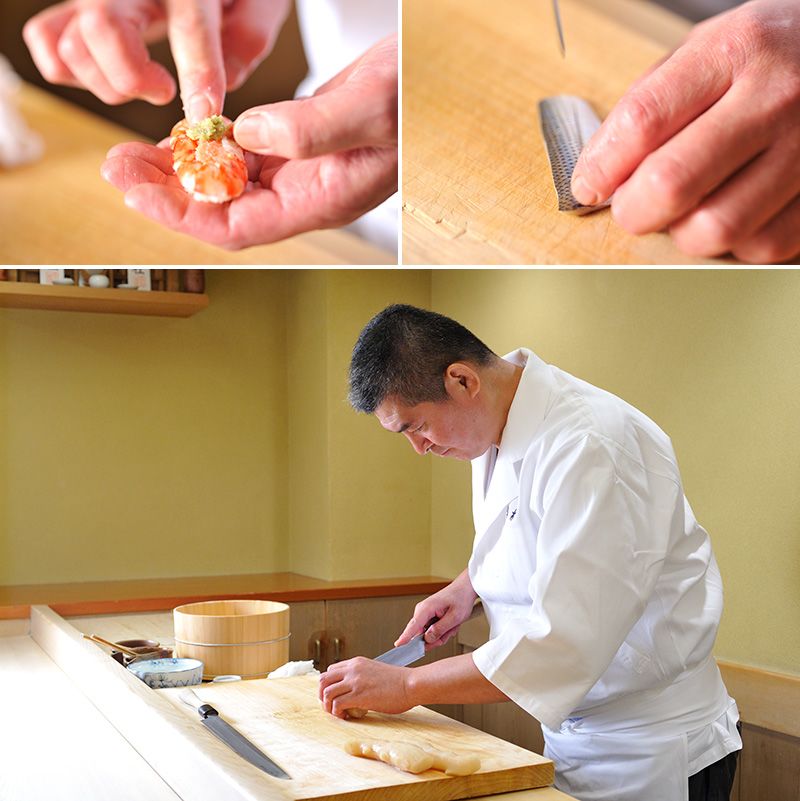 Even during the relatively lean summer months, Aoki typically offers more than 20 types of fish at his restaurant. Seat yourself at the counter, and he quickly serves up a dazzling array of enticing morsels on cool porcelain plates: hoshi-garei (five-spot flounder), kochi (flathead), kohada (gizzard shad), aji (horse mackerel), steamed awabi (abalone) . . .

Because the flavor of maguro is said to suffer in the summertime, Aoki goes from seller to seller at the Tsukiji fish market, selecting the best tuna available. How he cuts and prepares it depends on the freshness of the fish and how long it has aged. He can be resourceful when necessary, sometimes applying several thin slices of chūtoro (medium fatty tuna) in place of one thick piece. 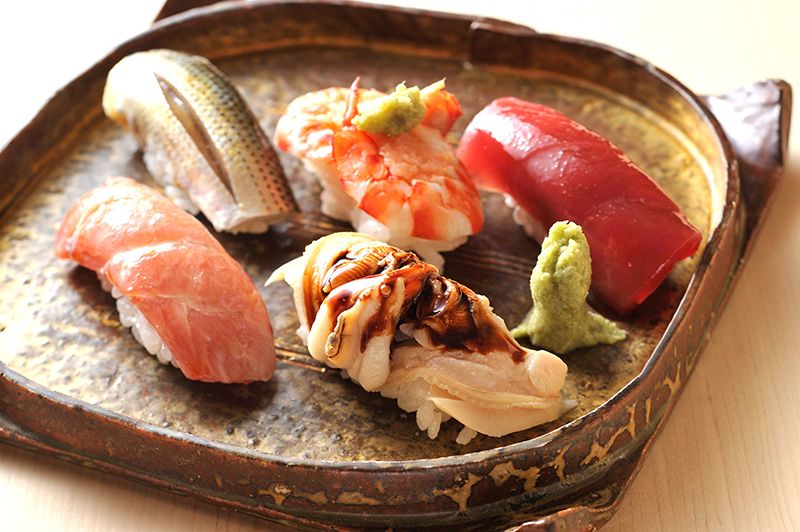 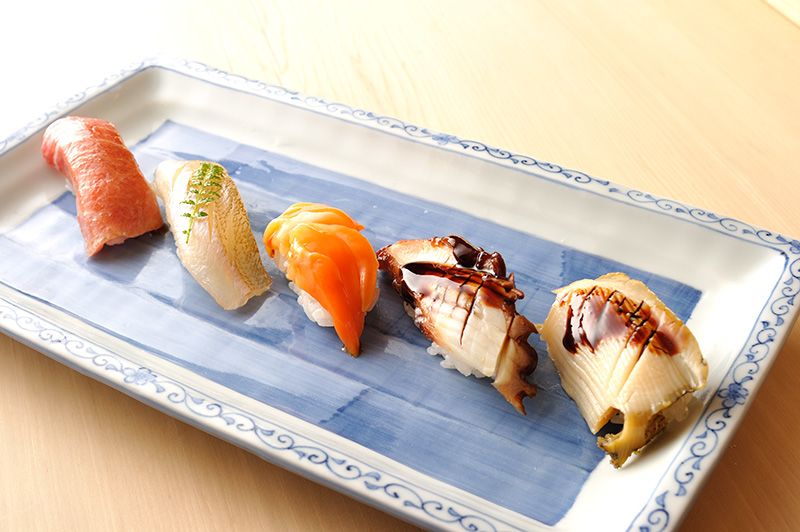 Yoshi’s tried-and-true recipes occupy a prominent place on the menu. One seasonal favorite is tako (octopus) rubbed with salt and simmered slowly in broth flavored with soy sauce and sugar. The tender, sweet-and-salty flesh of the octopus, the wasabi, and the vinegared rice balance one another for a perfect bite.

Alongside these standby items are Aoki’s original contributions. One of his specialties makes use of tenaga-ebi, a type of shrimp (technically, a small lobster) almost never used in sushi. Aoki grills the crustacean with the shell on until barely cooked through, then slaps it (minus head, tail, and shell) on a portion of vinegared rice. Another creation features steamed oyster brushed with his own special oyster sauce instead of the usual soy-flavored sauce. Pop one of these in your mouth and experience the aroma of fresh shellfish roasting on the beach. “Ingredients with a fishy odor are unacceptable in a sushi restaurant,” says Aoki. “On the other hand, the seawater aroma of ocean-fresh seafood can be a secret weapon for the sushi chef who knows how to highlight it.”

Despite the demands of the restaurant, Aoki continues to make time for travel abroad. His periodic restaurant-hopping trips to New York, Paris, and cities around Asia provide new culinary insights, which he integrates seamlessly into the Edomae tradition to enrich and enliven the menu at Sushi Aoki.

Aoki is modest about his creative contribution. “Edomae sushi is a mature culinary tradition that was perfected generations ago,” he says. “You can’t just crank out new ideas and expect them to stand the test of time.”

Beneath that humility, though, one senses the quiet pride of a master craftsman who takes delight both in honoring tradition and in taking it to new heights. 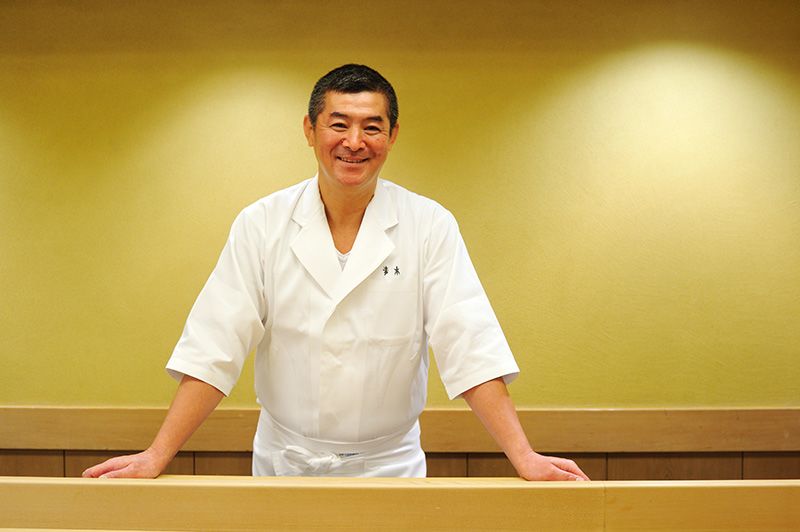