Culture Lifestyle Apr 3, 2015
The mountainous regions of Japan have a long tradition of eating wild game. And in recent years this tradition has been enjoying a revival as more and more restaurants make use of venison and other wild meats. This article takes a look at the past and present of this little known aspect of Japanese cuisine.

One of the iconic images of Japan to many around the world would be the sight of modest two-story homes nestled between gleaming high-rise buildings. But if one travels outside the cities, into what might be called “deep Japan,” there is a completely different world, made up of small settlements enclosed by mountain peaks. This is the mountainous realm of Japan.

This is also a land of trees, since 70% of all land in Japan is covered by forests. The amount of trees, when compared to European countries, is only surpassed by Finland and Sweden. But unlike the gently rolling hills in most of Europe, the slopes in Japan are steep, making it hard to reside in many areas or farm the land there. This is why, since ancient times, forestry has been a key occupation. And residents of these highlands have relied on the natural bounty of the mountains. This has given birth to a culinary culture that is quite different from what emerged in the coastal areas and cities.

The image most people have of traditional Japanese cuisine is a diet that centers on rice, vegetables, and other plant-based foods like tōfu, as well as a great deal of fish. There is also an overriding view that meat only became a part of Japanese culinary habits in the modern era. In fact, however, there was some meat consumption in premodern Japan. There has been hunting in Japan since ancient times, and even after agriculture took root this custom of eating wild game continued. Although Buddhism imposed a taboo on eating meat, the custom was not brought to an end. Even during the Edo period (1603–1868), when meat consumption was banned by the Shogunate, people living in mountainous areas continued eating meat as a source of protein during the cold winter months, when it was difficult to grow vegetables.

In this way, since ancient times, the custom of hunting wild animals was passed down from generation to generation. The main animals hunted across Japan were deer and wild boars, as well as hares, tanuki (raccoon-dogs), and green pheasants. And bears were also hunted in Hokkaidō and the main island of Honshū. 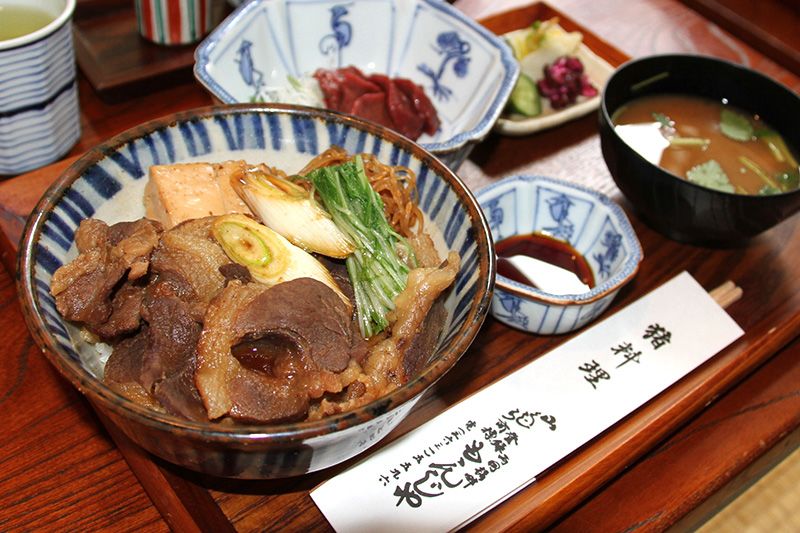 Wild boar has long been loved in Japan. This delicacy can be enjoyed in Tokyo at the long-established restaurant Momonjiya, which serves a lunch special of boar meat over rice. 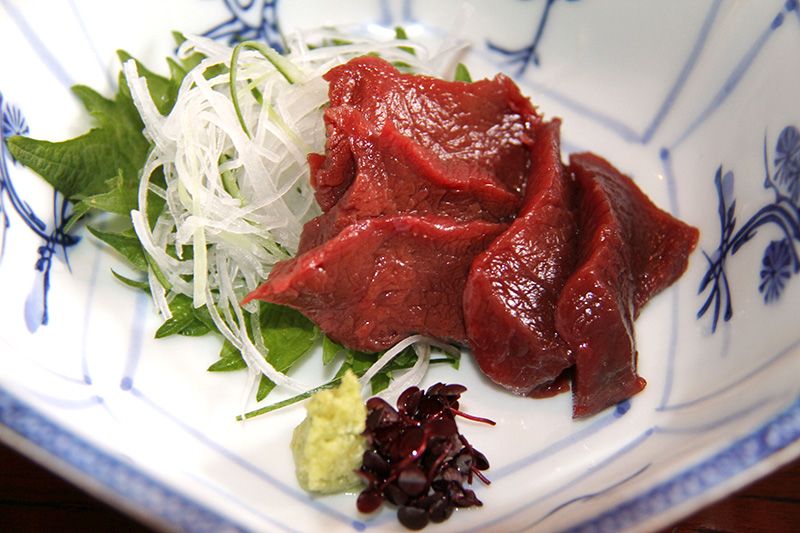 A raw venison dish served at the restaurant Momonjiya, noted for its rich flavor and lack of any “gamey” smell.

This hunting culture and eating of mountain-dwelling animals does not fit in well with the Buddhist aversion to the destruction of life. Given that fact, it is interesting to consider the case of a Shintō shrine in Nagano Prefecture, which is deeply connected to the tradition of hunting. Since ancient times, the Suwa Taisha shrine has offered amulets that permit a person to eat deer and special chopsticks to be used when doing so. Visitors to the shrine who use the chopsticks while reading out the words of a special chant are granted permission to eat deer. Engraved on the “permission-to-eat-deer” amulets, or kajikimen, is the doctrine that the destruction of life in this case coexists with benevolence. That is to say, hunting that is done in order to live is religiously justified. It was for this reason that the shrine attracted hunters from around Japan and the samurai faithful.

Suwa Taisha shrine (left) in Nagano Prefecture attracted believers among traditional matagi hunters and samurai; the special amulet and chopsticks (middle) at the shrine to sanctify the consumption of venison; the words of a chant used at the shrine (right), which state that the deer that is eaten becomes assimilated into a human being, thereby reaching nirvana.

When the Tokugawa shogunate was toppled in the latter half of the nineteenth century, ushering in the Meiji era (1868–1912), eating meat became a symbol of civilized behavior. In the large cities, pigs and cattle were raised for consumption, and restaurants began sprouting up that served dishes from the meat-eating cuisine up in the mountains, such as wild boar stew. These dishes came to be loved by city dwellers, but after World War II, as Japanese lifestyles became more Westernized, more and more beef, pork, and poultry was produced and consumed in Japan. Even those living up in the mountains followed this trend and became accustomed to enjoying seafood as well as a normal part of their diet. This process of modernization has brought standardization to Japan’s food culture, and as a result many local delicacies are disappearing.

These days, even though eating wild game is a rarity for most people, it is possible to encounter this cuisine, whether at established specialty restaurants in major cities or at hot-spring resorts and other spots up in the mountains. Tasting grilled or stewed game that was hunted in local areas on a trip is an enjoyable way for people to savour an out-of-the-ordinary experience.

Wild boar meat (left) used for a stew dish at the restaurant Takinoya in Hakone that brings out its umami flavor; the delicious meat melts in the mouth and does not have any gamey smell because of how the hunters carefully prepare it. A stew of horse and deer meet (right) served at the restaurant Hamakō in Yokohama; the dish is served with raw egg, much like sukiyaki.

A Return to Wild Game

In remote mountain regions of Japan, and even in some cities, the damage caused to crops by wild animals has become a source of concern. Herds of deer or wild boar have been eating up fruits and vegetables just before harvests and also causing serious damage to forest ecosystems. Meanwhile, it has become increasingly common for bears to attack hikers or mushroom foragers or even show up in residential areas. Wild boars, too, have been spotted in cities, even loitering around the neighborhoods and university campuses of the sophisticated port city Kobe, known for its Western culture.

Every year in Japan around 40,000 deer are hunted. The annual damage caused by deer and other animals to the agricultural and forestry industries exceeds ¥20 billion. This is a major reason why many elderly farmers have had to abandon the agricultural profession. It is estimated that between 1989 and 2011 the wild boar population doubled and the number of deer increased several fold. Even the Asian black bear, which is listed as an endangered species globally, has been increasing in numbers in Japan. 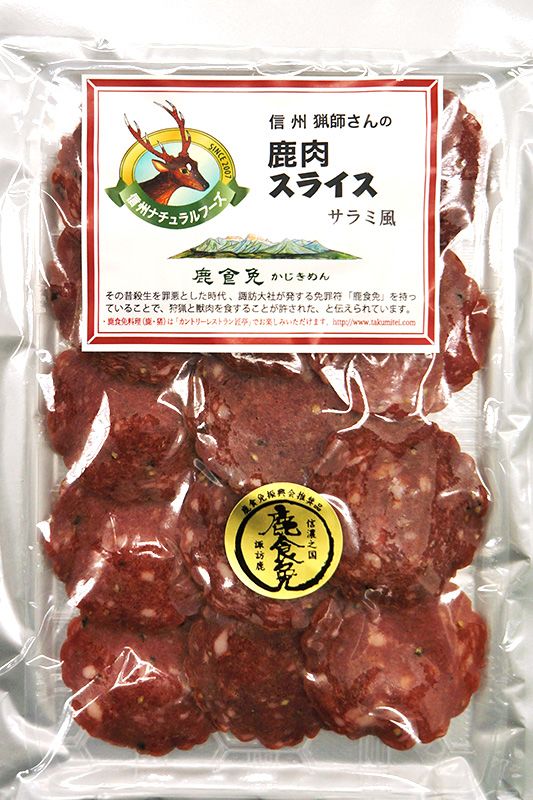 Salami made from deer meat hunted in Nagano Prefecture.

Given this situation, some municipalities are working hard to promote local game. This is not merely a way to control animal populations, but also to take a fresh look at Japan’s unique culinary traditions and bolster the local community. This trend started with venison in Hokkaidō, and in recent years has expanded to include the effort to brand and increase the quality of all sorts of game in Japan’s main island, Honshū.

Nagano Prefecture has come up with its own system for certifying wild game, under the label, “Shinshū Gibier,” with the aim of providing high-quality food products; gibier is the French word for game. This system evaluates the entire process, from butchering and preservation all the way to distribution. According to Takeuchi Kiyoshi, who runs the first authorized supplier of Shinshū Gibier venison, Hagukumi Kōbō Gaku, the key to delicious venison is to carefully butcher the deer in a way that eliminates any unpleasant odor. Takeuchi is involved in hunting the deer, then processing and selling the venison, as well as running a restaurant that specializes in deer meet. He also chairs a hunting association in the area around the city of Suwa in Nagano Prefecture. His aim is to spread the popularity of high-quality wild meat products in a way that ensures coexistence with nature.

Along with the recent revival in the popularity of restaurants that serve Japan’s traditional wild game dishes from mountainous areas, new twists on using wild game such as venison burgers are appearing. French restaurants in Japan have also come up with popular gibier menu items during the autumn and winter seasons. The use of deer and other wild animals hunted in Japan’s rural fields has been providing diners with all sorts of new taste sensations. 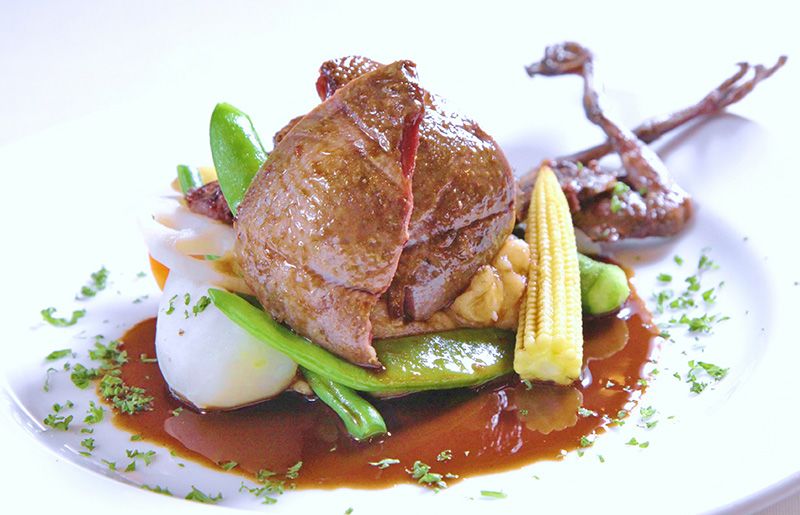 A roast turtle dove dish served at the French restaurant L’Habitude, located in the Kagurazaka district of Tokyo (photograph courtesy of L’Habitude).

This “old-meets-new” trend in using wild game from Japan’s mountainous regions also reflects a particular attitude toward nature, where people take the natural balance into consideration and feel gratitude toward the bounty of nature. The revival of wild game in Japan is an opportunity to rediscover the food culture in the country’s mountainous regions, while at the same time rethinking the relationship between people and nature.

(Originally written in Japanese and published on March 16, 2015.)

■Momonjiya
A restaurant in the Ryōgoku district of Tokyo established in 1718 that serves dishes featuring wild boar, deer, and bear. The word momonji in the restaurant name is a general term to refer to wild game.
1-10-2 Ryōgoku, Sumida-ku, Tokyo
TEL: 03-3631-5596

■Jinchō Kanmoriya Shiryōkan
Includes an exhibition that recreates the divine sacrifice of deer ceremony at the Suwa Taisha shrine.
http://www.city.chino.lg.jp/www/contents/1000001465000/

■Mountain Cuisine: Takinoya
A restaurant that offers local Hakone cuisine in the atmosphere of a mountain farmhouse. An English menu is available in response to the growing number of foreign tourists.
442 Kowakudani, Hakone-machi, Ashigarashimo-gun, Kanagawa Prefecture
TEL: 0460-82-4800