Culture Oct 28, 2016
Chef Hagi Harutomo has received regional, national, and international recognition for his creative cooking spotlighting luscious fresh-picked heirloom vegetables and other agricultural products from Fukushima Prefecture. We visited him at his French restaurant in Iwaki, where he offers the ultimate farm-to-table dining experience to no more than one party per day. 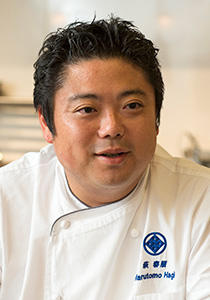 Owner-chef, Hagi French Restaurant. Born in 1976 in Iwaki, Fukushima Prefecture. Opened his first French restaurant, Bellecour, in Iwaki in 2000. Shifted to a one-party-per-day prix-fixe style of service after business fell off sharply in the wake of the 2011 Fukushima Daiichi nuclear accident. In 2013, was invited to Europe, where he cooked for President Hollande of France and Prince Albert of Monaco. Awarded a Ryori Masters prize by the Japanese Ministry of Agriculture, Forestry, and Fisheries in 2014.

Hagi French Restaurant is situated in a quiet residential section of Iwaki, a city of about 350,000 in southern Fukushima Prefecture. Here, about 10 minutes by car from JR Iwaki Station, chef-owner Hagi Harutomo entertains a maximum of one party per day, by reservation only. Despite its out-of-the-way location, the restaurant attracts discerning diners from near and far. They come for a unique farm-to-table experience built around local organic produce.

On the day of a dinner reservation, Chef Hagi rises early to shop for ingredients. He typically visits four or five local farms, inspecting and tasting their produce himself. Only after selecting the tastiest vegetables available that day does he choose fish or meat to complement them and settle on the day’s menu.

Dinner at Hagi begins with a face-to-face introduction to the leading players in that day's performance—the farm-fresh vegetables picked hours earlier. Chef Hagi comes to the table bearing a metal tray laden with samples of the day’s harvest, which he identifies and explains with care. Today’s selection includes asparagus, zebra eggplant, and two local heirloom vegetables: okuimo potato, and Ojiroi cucumber.

Because Hagi plans each dinner from scratch on the basis of the vegetables available that day, the restaurant has no written menu per se. Instead, guests are furnished with cards describing the main ingredients of each course and the local producers who supplied them.

Today’s dinner begins with a cold dish appropriate to late summer: junsai (water shield) from the Urabandai region (southwestern Fukushima Prefecture) in a triple consommé, crowned with fresh corn and sea urchin. Junsai, a water plant with a distinctive slippery coating, is prized for its unique texture, and Hagi believes that there is no better junsai than that which grows in the highlands north of Mount Bandai. The gelatinous leaves float in a rich consommé made from Fukushima-raised beef, shamo chicken from Kawamata (northeastern Fukushima), and purebred Iwaki-raised kurobuta pork. The sweet crunch of the local corn and the velvety richness of the sea urchin balance out this cold dish to create a memorable culinary curtain raiser. 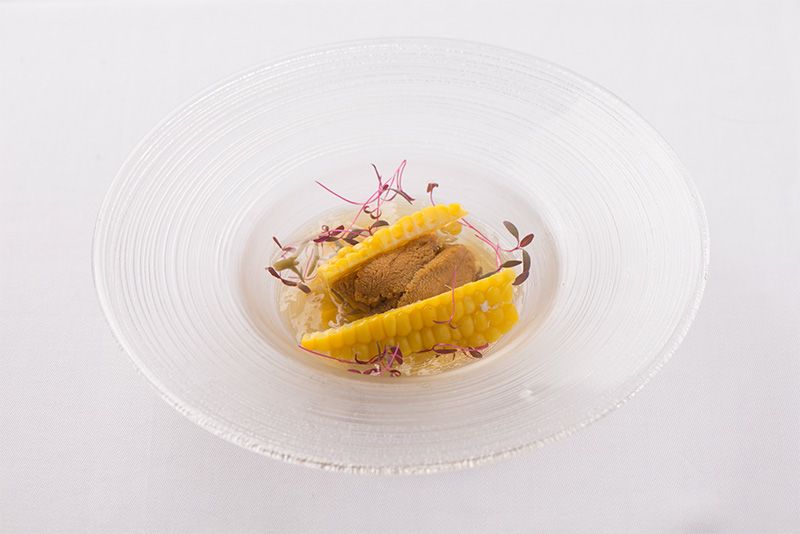 Junsai (Urabandai) in a triple consommé.

Another dish was lamb on a purée of okuimo potato. The lamb was raised on a farm in Samegawa (central Fukushima) that specializes in Suffolk sheep, a breed renowned for the flavor, texture, and color of its meat. Okuimo is a local tuber with a somewhat glutinous texture and a mildly sweet flavor that complements the lamb perfectly. The asparagus spear on the side is sweet, tender, and crunchy.

Chef Hagi calls ingredients like these “treasures of Fukushima.” 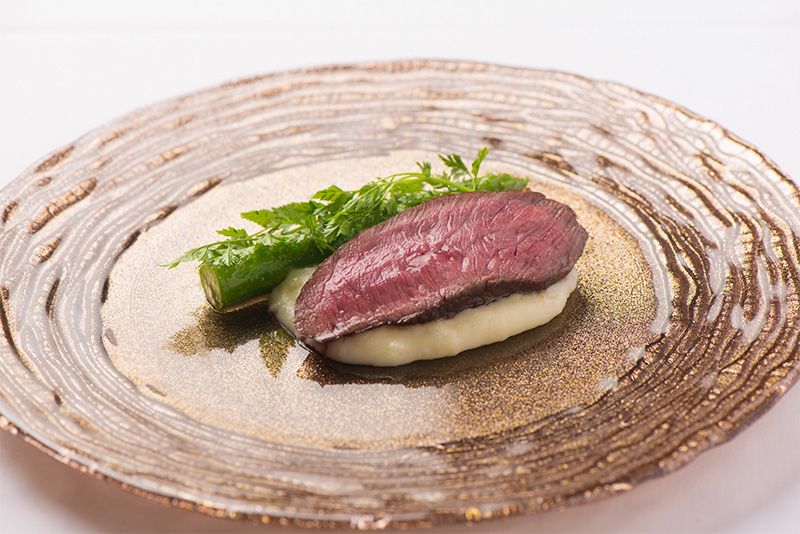 Suffolk lamb on a purée of okuimo potato. 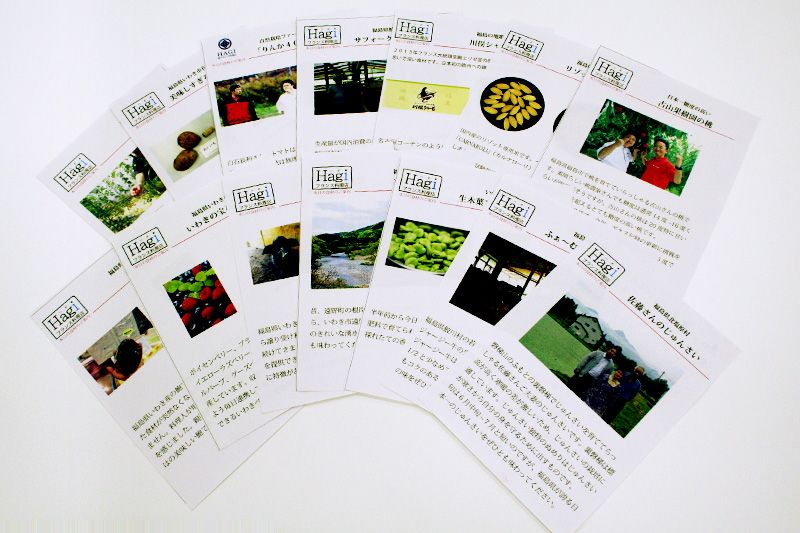 Cards introducing local producers and the ingredients they supplied take the place of a printed menu at Hagi.

After graduate from high school, Hagi enrolled at the renowned Tsuji Culinary Institute in Tokyo. In 2000, at the age of 24, he opened a bistro-style French restaurant, Bellecour, inside his family home in Iwaki. Grounded in traditional French cuisine, Hagi’s cooking at that time highlighted meat and fish, with vegetables playing no more than a supporting role. The restaurant did fairly good business, though Hagi frequently felt there were not enough hours to study and enjoy cooking in a day.

All of that came to an abrupt end on March 11, 2011, when a massive earthquake and tsunami hit the Tōhoku region, triggering a catastrophic accident at Fukushima Daiichi Nuclear Power Station, less than 50 kilometers north of Iwaki.

“Overnight I turned from an ordinary person into a disaster victim. It was like my world had suddenly faded from color into black-and-white,” he recalls.

Iwaki was not directly impacted by the nuclear accident, lying outside the area designated for evacuation. But water supplies were interrupted for more than a month, and rampant fears of radioactive fallout dealt a devastating blow to the local economy, especially the farm and food industries. During the three months following the tsunami, business at Hagi’s restaurant dwindled to about one party a day.

Hagi decided to channel all his effort and ingenuity into serving those few remaining customers the best meal he could muster using the limited ingredients available to him. One day it dawned on him that those diners were leaving his restaurant happier than his pre-quake customers.

It was around the same time that Hagi, then 35, met Shiraishi Nagatoshi, a 32-year-old local farmer.  Shiraishi’s farm, a family business going back eight generations, had adopted organic methods and was growing a wide range of premium vegetables, including local heirloom varieties. Shiraishi recalls giving Hagi some green tomatoes and getting them back a few days later in the form of tomato preserves. “He took one bite, and said ‘Wow!’ I knew right away he was different from the average chef.” 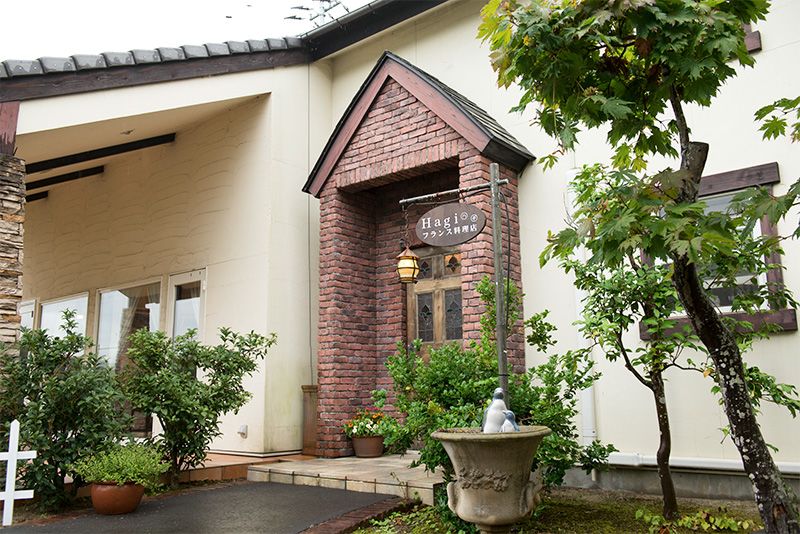 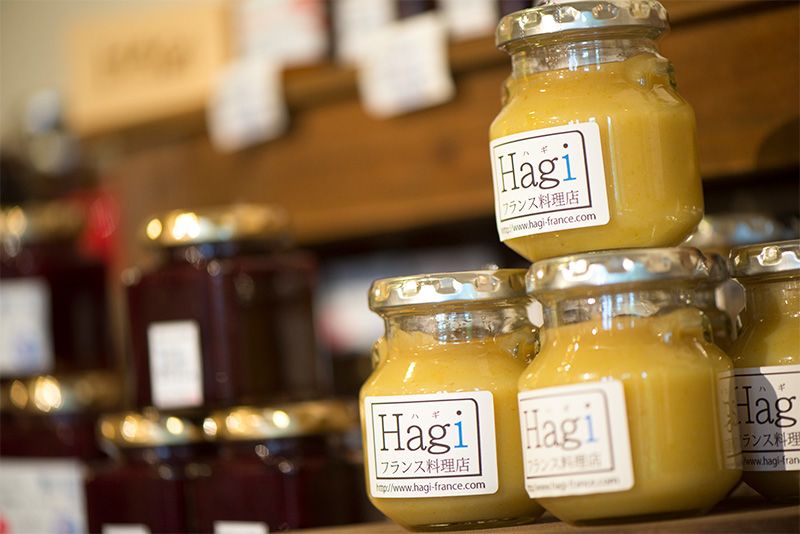 Hagi has developed a line of vegetable confitures (preserves and jams) and dressings in collaboration with Shiraishi and other local producers.

Hagi took me out to Shiraishi’s farm, about a 20-minute drive from the restaurant. It was near the end of summer, and the eggplants were ripening in the field. When Shiraishi handed Hagi an eggplant, Hagi bit right into it, then gave another one to me, saying, “Here, try it.” Fresh off the vine, it was crisp, juicy, and sweet. In addition to tomatoes, corn, eggplants, and other summer fare, Shiraishi Farm produces such winter vegetables as cabbage, broccoli, onions, and potatoes, along with the local Iwaki specialty, okuimo. 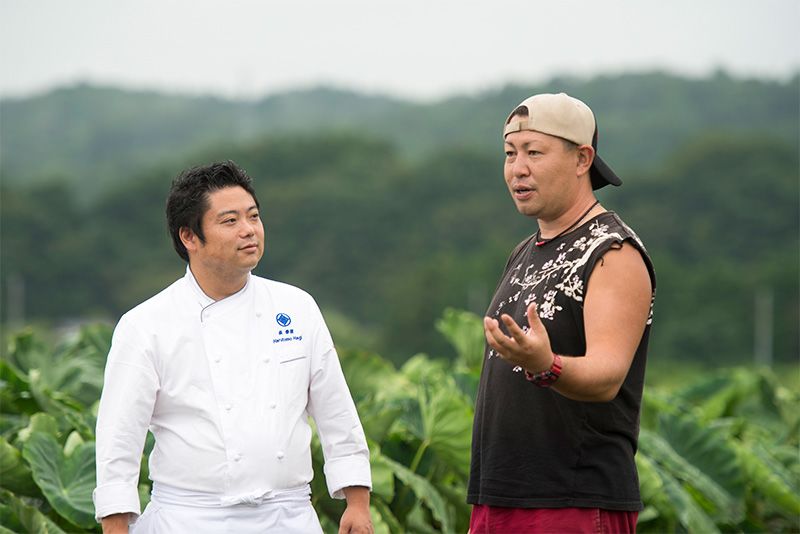 Hagi and Shiraishi at the latter's farm on the morning of a dinner reservation.

The 2011 earthquake set in motion a chain of events that transformed Hagi’s ideas about cooking. Despite the years he had spent mastering culinary technique and restaurant management, he realized he still had much to learn about the most important element of cooking: the ingredients. He began reading up in books and magazines. He learned the lingo of producers, visited and helped out at local farms, socialized with the farmers—often drinking and chatting long into the night—and established a firm foundation of trust.

Hagi and Shiraishi developed a particularly close relationship. They were of roughly the same age and were both victims of the fears and rumors that swirled around locally produced food in the wake of the nuclear accident. “We had sunk about as low as we could go when we ran into each other,” recalls Shiraishi. Since then, Hagi and Shiraishi have been friends and partners, collaborating on a variety of important initiatives to promote local produce while boosting their own businesses.

For Hagi, the partnership inspired a whole new approach to cooking. “Fresh-picked vegetables are like pure energy. In the process of experimenting with new dishes that could stand up to that energy, I completely changed my style of cuisine,” he says. Every day offered new challenges for making the most of the fresh vegetables produced in Iwaki and surrounding areas. These efforts included a joint project commissioned by the Iwaki municipal government to develop new recipes using Iwaki heirloom vegetables. 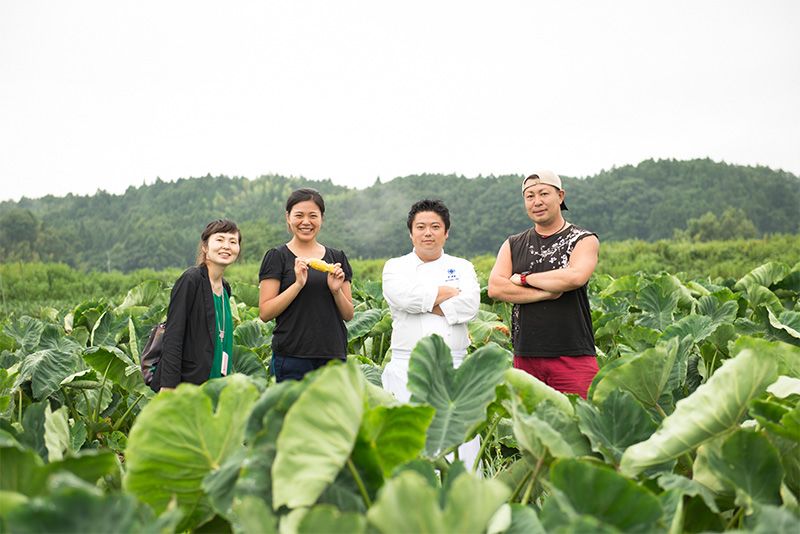 The Shiraishi Farm is a magnet for volunteers and college students eager to learn about organic farming.

One day, the prefecture’s local agriculture office contacted Hagi with a message from the Club des Chefs des Chefs, an elite society composed solely of personal chefs to heads of state around the world. The CCC wanted Hagi to come to Europe for a two-month culinary tour, beginning in September 2013. At the club’s invitation, Hagi was able to visit Paris for the first time in 18 years, since interning there as a culinary student. Moreover, he became the first Japanese chef to cook in the kitchens of the Elysée Palace, the official residence of the president of France. Furnished with documents certifying the safety of his ingredients, Hagi used local Fukushima rice, sake, peaches, and smoked shamo chicken to prepare an elegant meal for President François Hollande, known for his gourmet tastes. The menu included a salad of smoked shamo chicken wrapped in vegetables and nori seaweed like a role and a sorbet made with Fukushima rice and sake.

The question arises: Can a restaurant that serves just one party a day survive as a business? Hagi assures us that it can. He offers three tiers of prix-fixe dinners (all three-course menus), priced at ¥10,000, ¥15,000, or ¥20,000 per person (daytime and evening meals are priced the same). Drinks and taxes are extra. “Since dining is by advance reservation only, I can use vegetables picked the same day and serve everything freshly cooked for maximum flavor,” he says.

Hagi’s mission is summed up in the concept engraved on the pamphlet he passes out to his guests. It can be translated roughly as follows:

In Tokyo, high operating costs would make it almost impossible for a restaurant to turn a profit with such low volume. But Hagi thinks his establishment can demonstrate the viability of an alternative business model for regional communities. He is banking on the idea that diners will pay extra and even travel from outside the prefecture to enjoy a unique French-inspired farm-to-table experience built around fresh, organic, local produce. He hopes, too, that they will go home with a lasting and meaningful memory of Fukushima—a miyage (souvenir) embodying the special attributes of the land and its people. 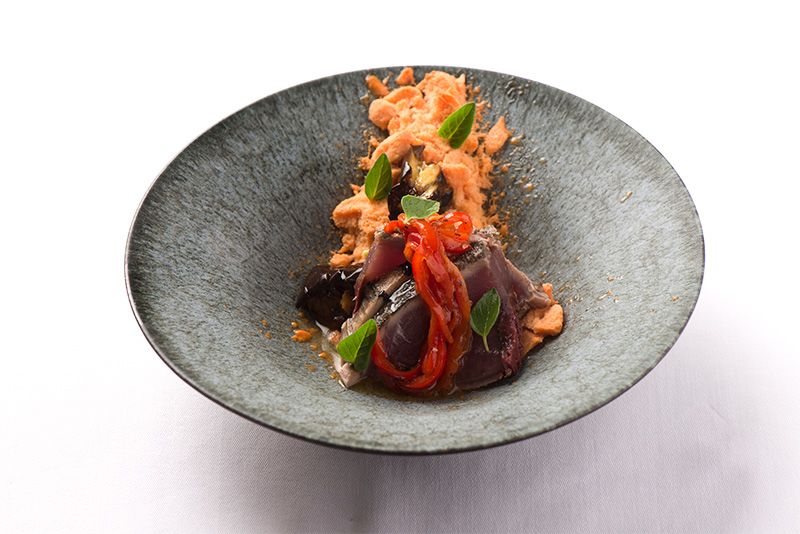 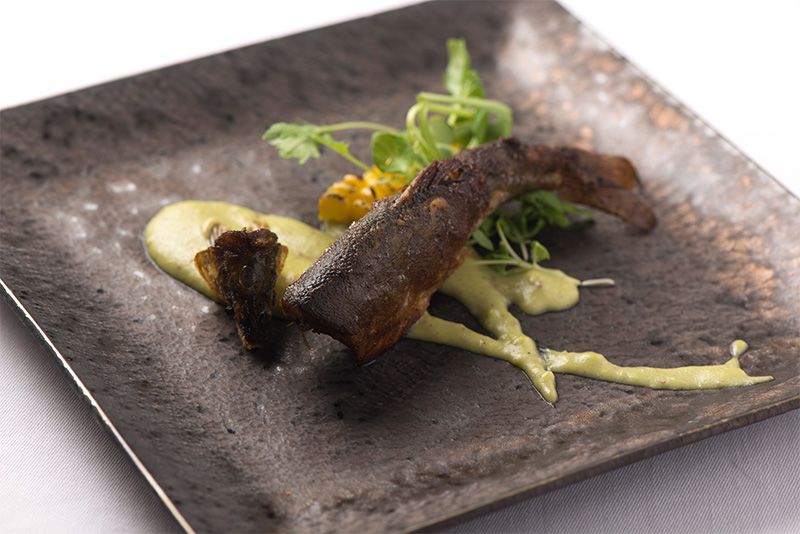 Battered and fried sweetfish (ayu) with a fava bean purée. 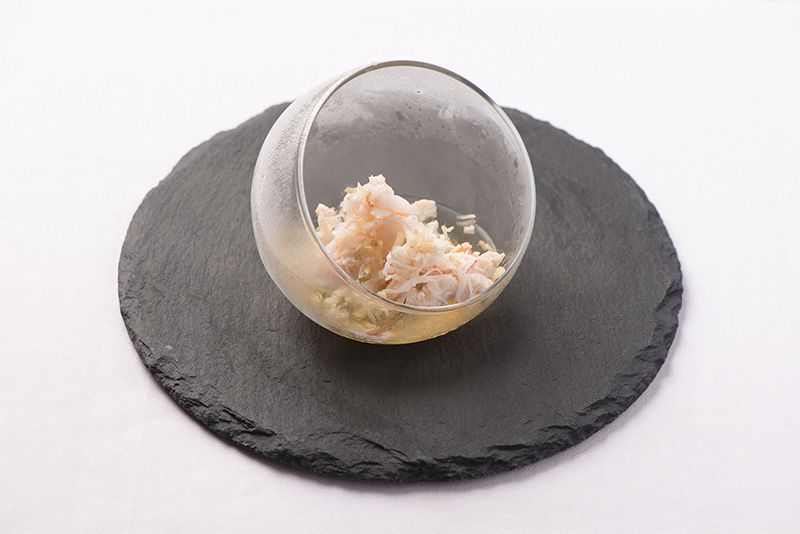 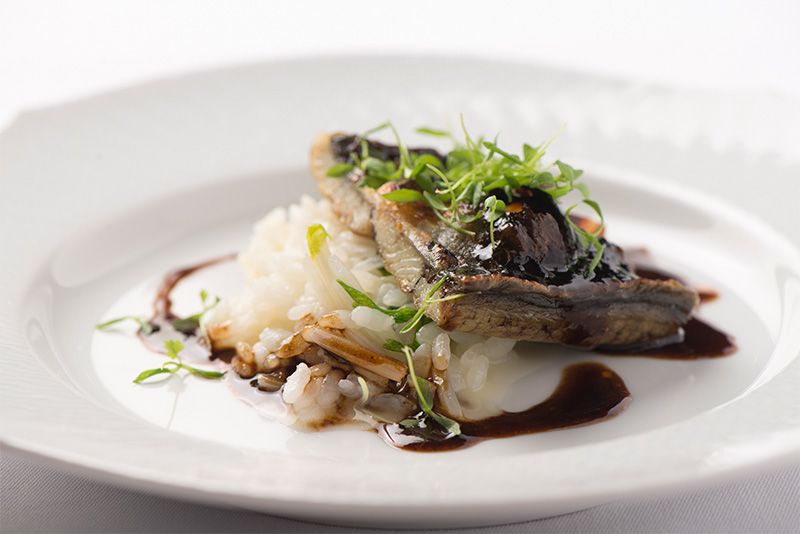 Grilled eel with a reduction of red wine and eel-bone broth and risotto (Iwaki rice). 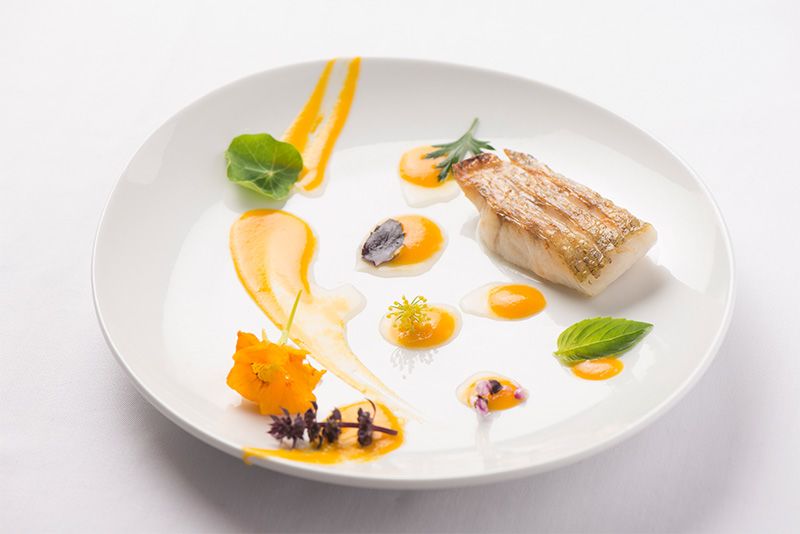 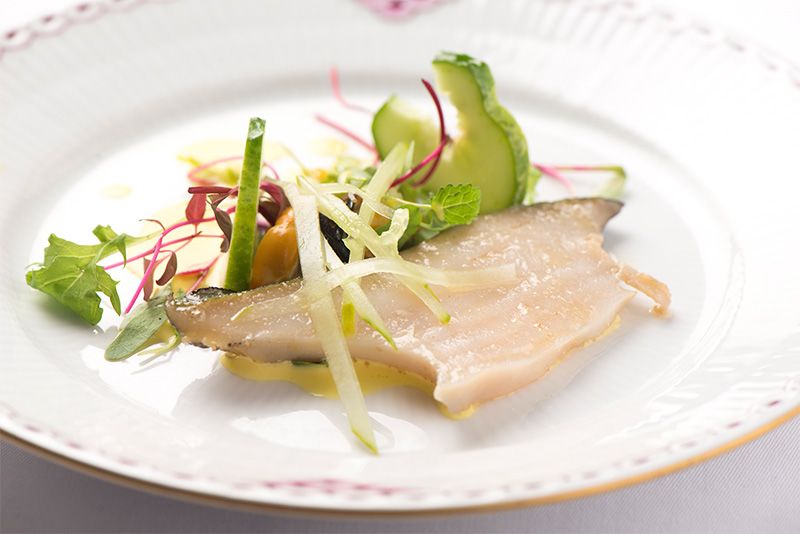 Suffolk lamb (Samekawa) on a purée of okuimo potatoes, one of some 70 heirloom vegetables grown in Iwaki. 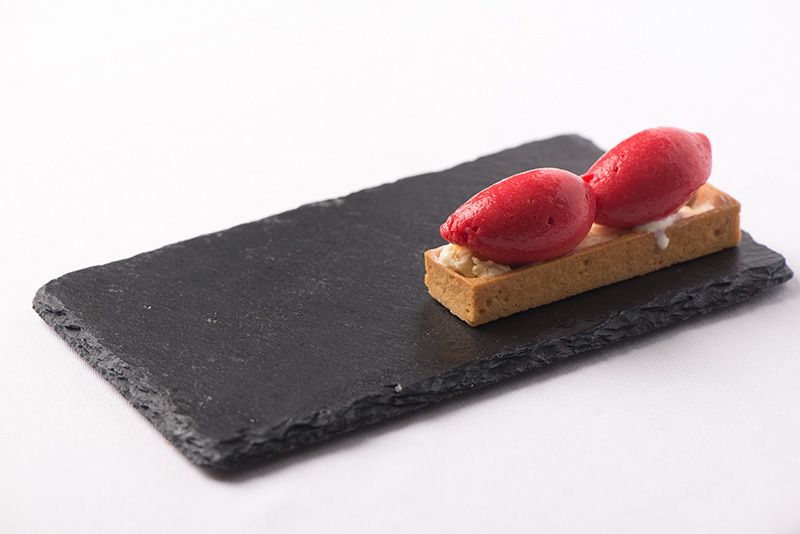 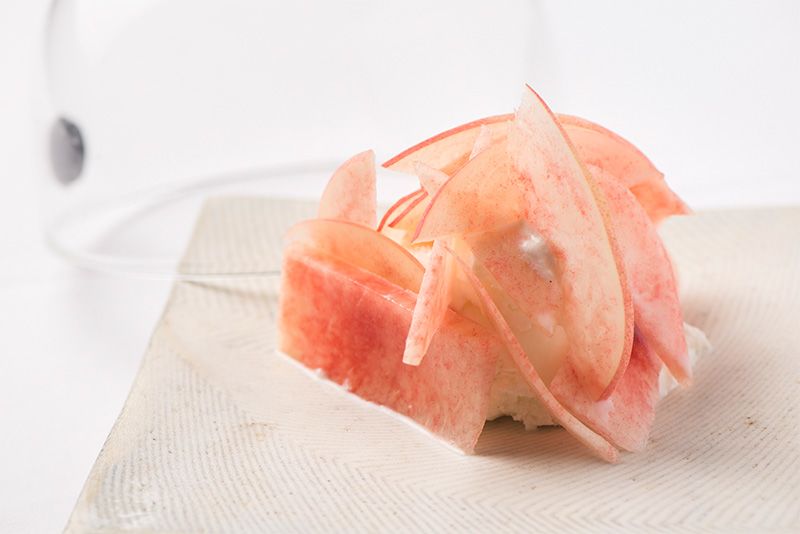 Originally written in Japanese by Doi Emi of Nippon.com and published on October 12, 2016. Banner photo: Chef Hagi takes a bite out of a fresh-picked eggplant at Shiraishi Farm in Iwaki. © Kodera Kei.