Culture Oct 3, 2017
Highly salted pickled plums, or umeboshi, have been a beloved part of the Japanese diet for centuries, prized for their preservative qualities and health benefits as well as their distinctive mouth-puckering sourness and salty tang. The assertive mixture of salt and sour make them a hard taste for some to acquire, though. Younger Japanese today are also eating far fewer umeboshi than previous generations did. However, proponents are fighting back, arguing that the combination of health benefits and unique flavor make the humble umeboshi the ideal superfood for the twenty-first century.

Suzuki Takafumi, managing director of umeboshi producer the Shōkibai Company, recalls with chagrin his firm’s overseas debut: “The first time we took part in an international food fair was in Turkey. I saw people putting an umeboshi into their mouth and spitting it out again in horror. I couldn’t believe what I was seeing.”

Headquartered in Wakayama city, the company produces its luxury brand Kishū Nankō-ume at its factory in Minabe in the Hidaka district of Wakayama Prefecture, an area famous for ume plums. After painstaking quality control, these supersized plums are individually packaged and are popular choices as gifts. Suzuki, confident in the quality of his company’s product, had grown used to success, making the less-than-positive reaction of tasters in Turkey all the more distressing. 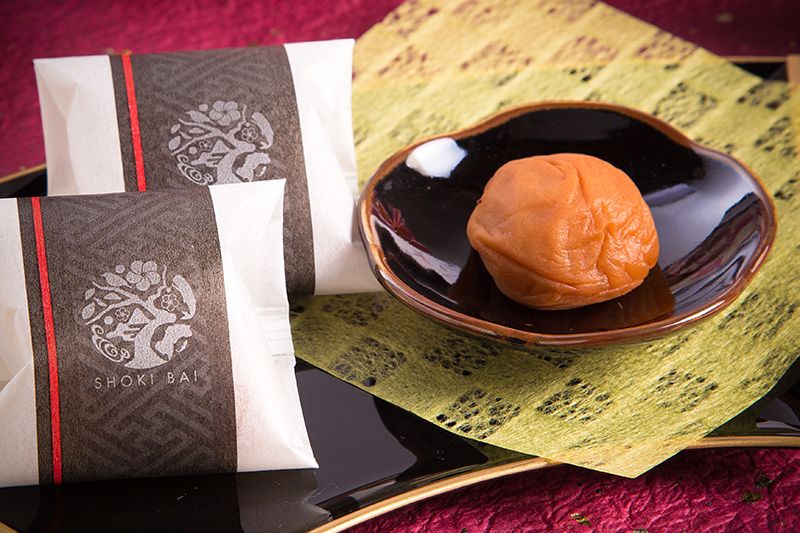 Shōkibai’s best-known product. A package of 10 plums in the Kiwami series sells for ¥2,700. (Photo courtesy of Shōkibai)

Undeterred by this first disappointment, though, Suzuki says Shōkibai remains determined to grow internationally and bring the joys of umeboshi to people around the world. “Not long ago, wasabi and pickled ginger were also unfamiliar tastes,” Suzuki explains. “But the international popularity of sushi changed all that, and today these have become an indispensable part of enjoying sushi for people around the world. I believe umeboshi have the potential to establish a similar place at the international table. We perhaps just need to modify our recipes slightly and find new combinations of umeboshi with different kinds of food.”

Suzuki sees no reason why the considerable health benefits and the great (if acquired) taste of umeboshi should not also make them popular overseas. “One important reason for the popularity of Japanese food overseas is its healthy image,” he says. “If we can make the health benefits of umeboshi more widely known, I’m sure their popularity will grow.” 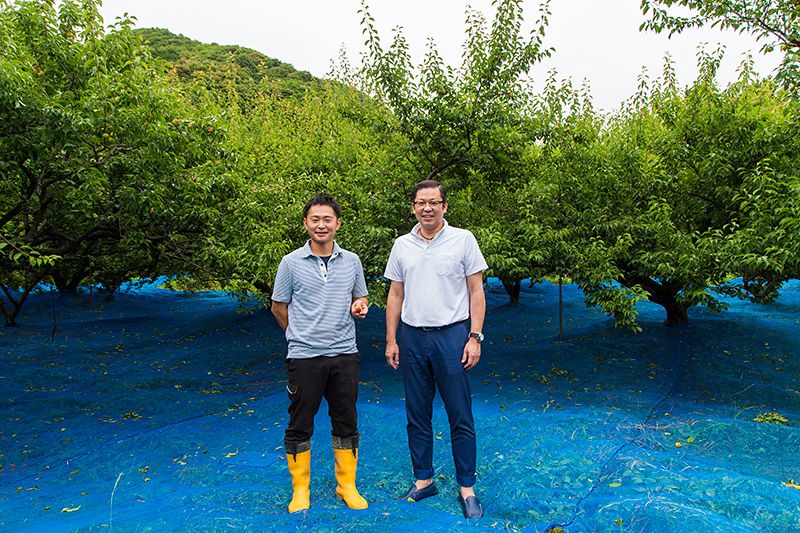 Suzuki (right) with ume farmer Kubo Ryūji. The two say they must take on new challenges to boost the value of the area’s plums.

Pucker up: It’s Good for You!

People in Japan have eaten umeboshi for centuries, having learned from experience of their restorative and preservative properties along with their virtues in helping to ward off colds and other bugs. People during the Heian Period (794–1185) used umeboshi as medicine. During the Sengoku period (1467–1568), an era of widespread military conflict among warlords, a concoction of umeboshi with rice flour and a rock candy known as umeboshi-gan was treasured by samurai as a long-keeping field ration.

To this day, though, the active ingredients of umeboshi and their health-giving effects are not widely known among the public. For this reason, Minabe recently established a dedicated department in the town hall to promote the area’s plums. Its activities include holding ume-themed events and it has even published a manga explaining the health benefits of the local specialty. 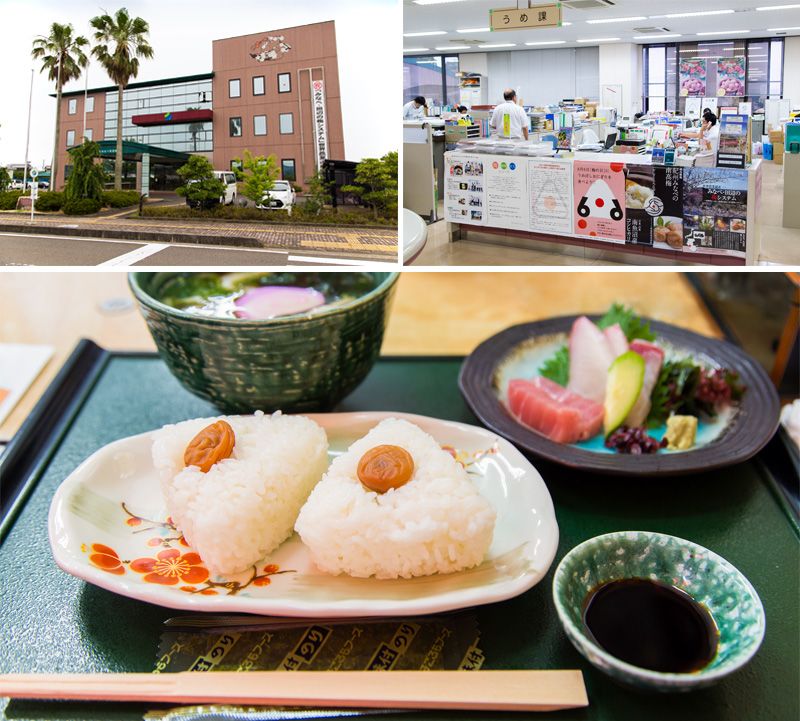 Umeboshi derives its distinctive tartness from citric acid. Ume contain the highest concentration of citric acid of any fruit, and even a small one contains anything from two to three times as much citric acid as a lemon.

Citric acid, along with lending umeboshi a mouth-watering sourness that sharpens the appetite, improves circulation and boosts the immune system, reducing the chances of coming down with a cold or catching a nasty bout of the flu. It has also been shown to limit the activity of the pylori bacterium, a leading cause of gastroenteritis, stomach ulcers, and stomach cancer. In addition, it boosts energy and aids the body in recovery after exertion by helping break down and flush out lactic acid, one of the causes of physical fatigue. 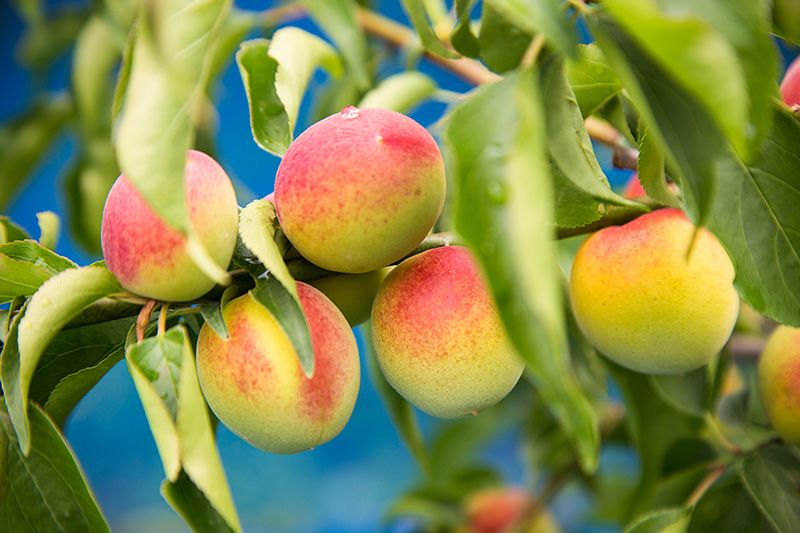 Nankō-ume, the pride of Wakayama, from Kubo’s orchard. The name comes from a local school that helped develop the new strain.

Umeboshi contain benzoic acid, a key component of its preservative properties and an important part of the aroma. The compound limits the ability of bacteria to proliferate, a trait thought to be one of the reasons for the popularity of umeboshi in rice balls as an easy, portable meal.

Umeboshi are a good source of polyphenols, which are thought to reduce the risk of diabetes, help lower blood pressure, prevent hardening of the arteries, and boost calcium absorption. In addition, it has been recently found that heating umeboshi produces vanillin, a chemical that helps to restrict the bloating of fat cells, providing potential support for people trying to control their weight.

One potential drawback is the high sodium content, though this makes umeboshi an effective way of combatting the dangers of heatstroke during the brutal Japanese summer. Nonetheless, it is probably a good idea to avoid consuming too many on a daily basis.

Suzuki points out that salt content varies among different varieties: “The basic traditional shira-boshi plums pickled in salt contain 20 percent sodium. Any lower than that, and a white mold starts to grow on the outside of the fruit. But in the case of umeboshi flavored with honey, shiso (perilla), and bonito flakes, the salt content is much lower, generally between 7 and 17 percent. The honey-flavored plums are becoming popular souvenirs among visitors from Taiwan and mainland China, where people are already familiar with the culture of eating ume.” 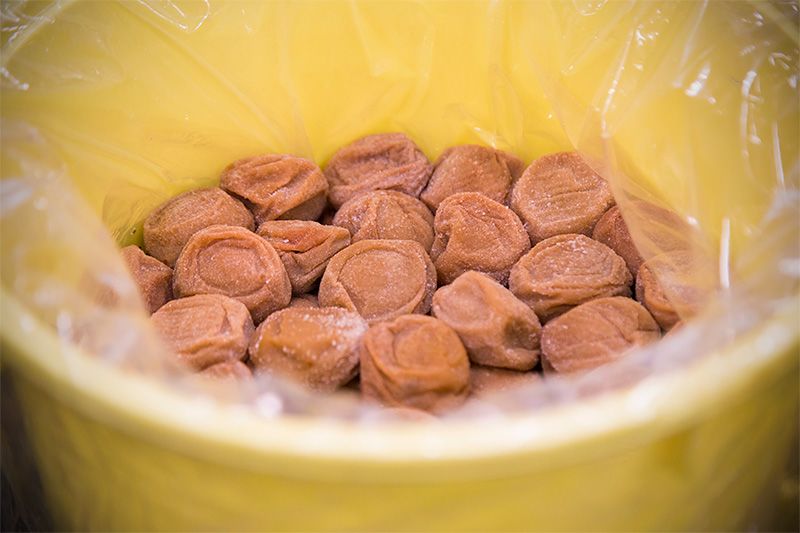 Shira-boshi plums have a high sodium content, but many locals say these salty ume are the best of all.

Lending an Accent to a Variety of Dishes

The characteristic tanginess of umeboshi is the product of extreme saltiness combined with the natural sourness of the plum. Many people enjoy sour flavors on their own, but some find the saltiness overwhelming at first. Not surprisingly, the taste may come as a shock to an uninitiated palate. (The reaction of unsuspecting children and foreigners when biting into a pickled plum for the first time has long been a source of amusement in Japan.)

There is no denying that umeboshi, even among die-hard fans, are an acquired taste. Parents generally tell children to eat umeboshi because they are considered healthy or add them to lunch boxes for their preservative effects, and in this way offspring gradually acquire a taste for the pickled fruit. Some advanced-level connoisseurs have been known to enjoy the plums on their own, but for most people the umeboshi are usually served as an accompaniment to a meal of rice, helping to bring out the overall flavor of the food and adding a subtle accent of its own.

However, young people in Japan have been eating fewer umeboshi in recent years. According to the Survey of Household Economy carried out by the Statistics Bureau of the Ministry of Internal Affairs and Communications, the volume of umeboshi bought by a typical household in the course of a year dropped by 30% between 2002 and 2016, from 1,050 grams to 750 grams. 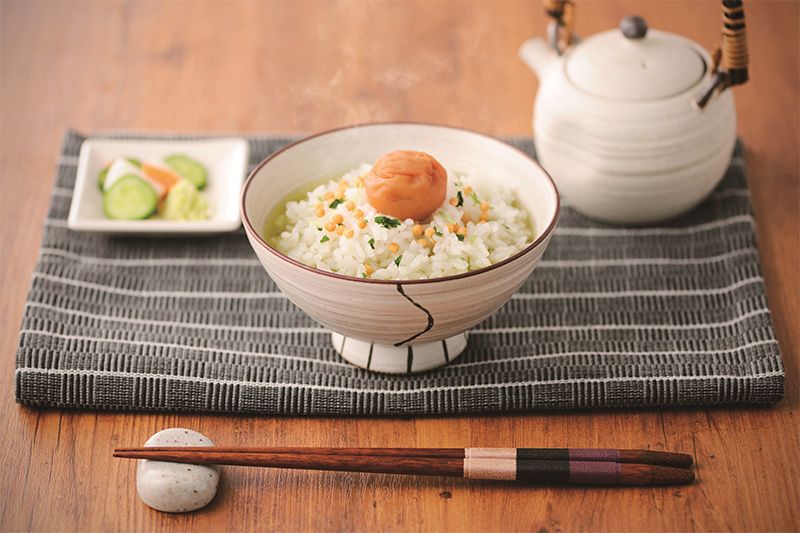 Many foreigners who find an umeboshi unpalatable on its own say they do not mind the flavor when served with rice, either in a rice ball or in a green tea and rice chazuke, as shown here. (Photo courtesy of Shōkibai)

Efforts to Bring Umeboshi to the World

It is fair to say that someone who has tried an umeboshi on its own and decided the strong taste is not for them has not yet experienced the true flavor of the umeboshi. Suzuki says it is still trial and error, but Shōkibai is getting there: “In Turkey, for our second tasting we matched the umeboshi with some cheese we had bought locally. And right away people’s attitudes started to change. ‘Hey, this isn’t bad,’ they started to say.”

Keenly aware of the potential of the overseas market, in April 2017 Shōkibai launched an ume concierge service that suggests new ways of enjoying umeboshi. Suzuki says the idea is to use the brand to establish a position for umeboshi as a distinctively Japanese flavoring. “We want to develop its potential to be enjoyed as a condiment, a bit like mayonnaise or dressing,” he says.

Products already on sale include an ume purée that has a lightly smoked flavor and umeboshi paste with slivers of truffles and Compté cheese from France. The Ume purée can be served as an accompaniment to steak, fish dishes, and salads, while the cheese-and-truffles combination makes a tasty appetizer to serve with wine. 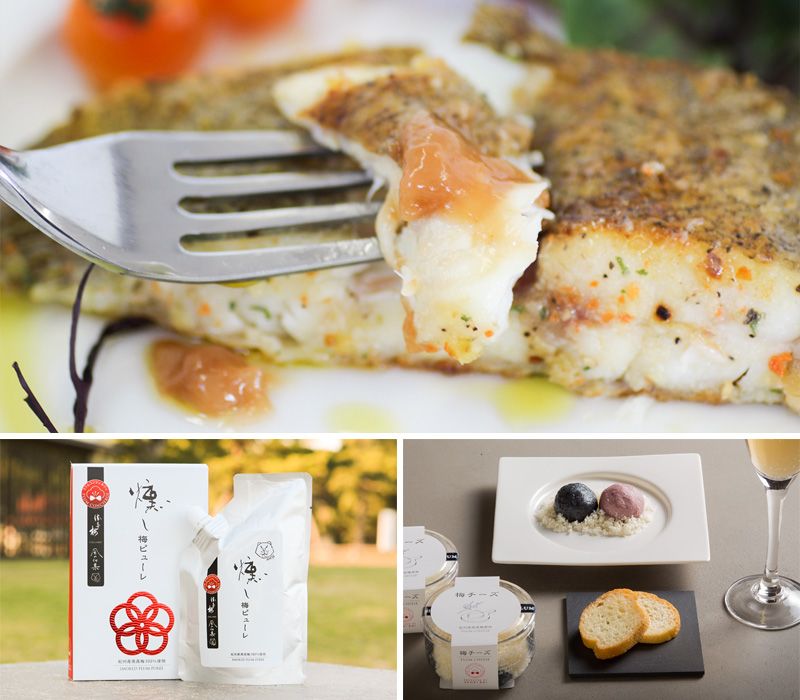 (Clockwise from top): Ume can be used to add a unique flavor to many kinds of dishes; ume served with cheese and truffles; packages of smoked ume purée.

Suzuki hopes the concierge service will boost ume’s international appeal by serving as a gateway for foreigners to experience the taste of umeboshi in an enjoyable way. He does not want it to stop there, though. “The idea is that they will then move on from these products to sample the joys and health benefits of the genuine umeboshi,” he says. 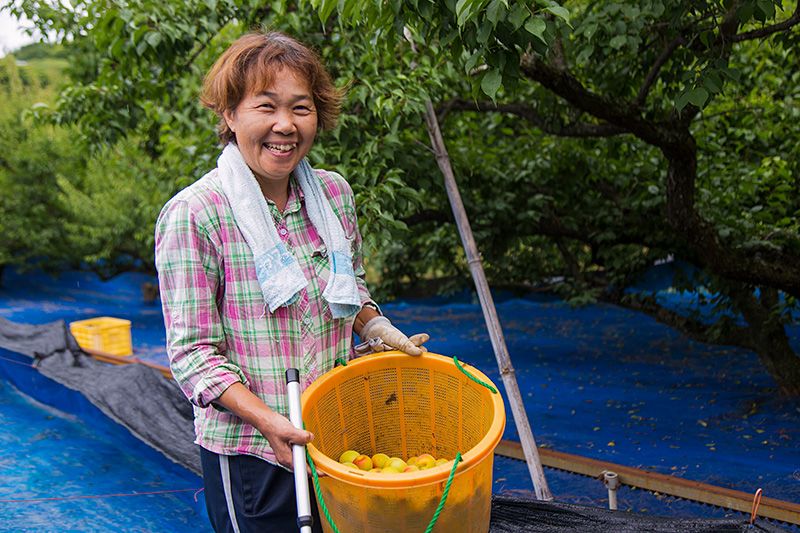 A plum grower, one of Shōkibai’s contract cultivators, shows off a basket of Nankō- ume.

(Originally published in Japanese on August 11, 2017. Banner photo: Rice balls with umeboshi. All photographs by Nippon.com except where otherwise noted.)