Culture Nov 30, 2017
Lucy Holmes and Tom Wilson are the founders of Kanpai London Craft Sake, Britain’s first sake brewery. Despite only launching their pocket-sized sake start-up in February 2017, they are already garnering attention for their innovative approach to making and marketing Japan’s national drink.

No wonder Lucy Holmes and Tom Wilson describe their sake business as a “nanobrewery.” At just 25 square meters in area, you almost feel this entire operation could fit one of the larger sake vats in Japan.

In fact, this time last year the newlyweds were still brewing in the spare room of their London flat. Yet already they are on their third batch of sake, have sold their brews at the famous Selfridges department store, and are reaching out to both sake fans and newcomers to the drink in cosmopolitan and trendy South London.

But apart from its compact size, and it being Britain’s first sake brewery, what makes this brewery so different from the 1,000 plus sake breweries in Japan, or even from other breweries in the United States and Europe? One answer is the radical approach Lucy and Tom have taken to both brewing and marketing.

“Our background is as beer lovers, and the sake process is not a million miles away from beer brewing,” says Tom. “We are following the craft beer model where you listen to what people want and create small-batch specials.

“We are very hands-on and artisanal, but we’re trying to play with modern techniques and flavor profiles. It’s our Western-model take on a tradition Japanese drink.” 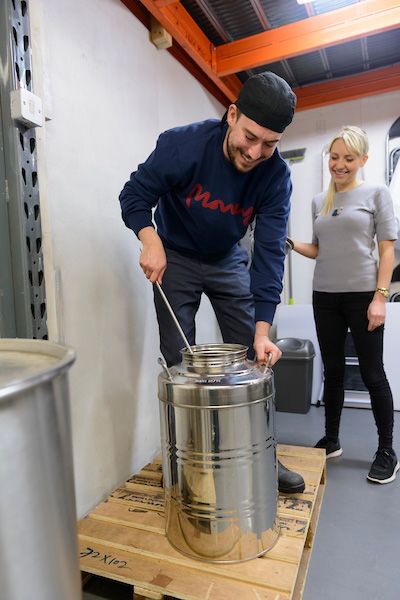 Tom Wilson examines the contents of a tank in the “nanobrewery” while Lucy Holmes looks on.

Dry-Hopped Sake and the Espresso Saketini

So far, Lucy and Tom have produced three 300-liter batches of sake, a mere trickle compared to the output of a major sake brewer. But they have used this modest amount to experiment with different styles. Half of their first batch was a junmai clear sake, and the other half a cloudy nigori sake. 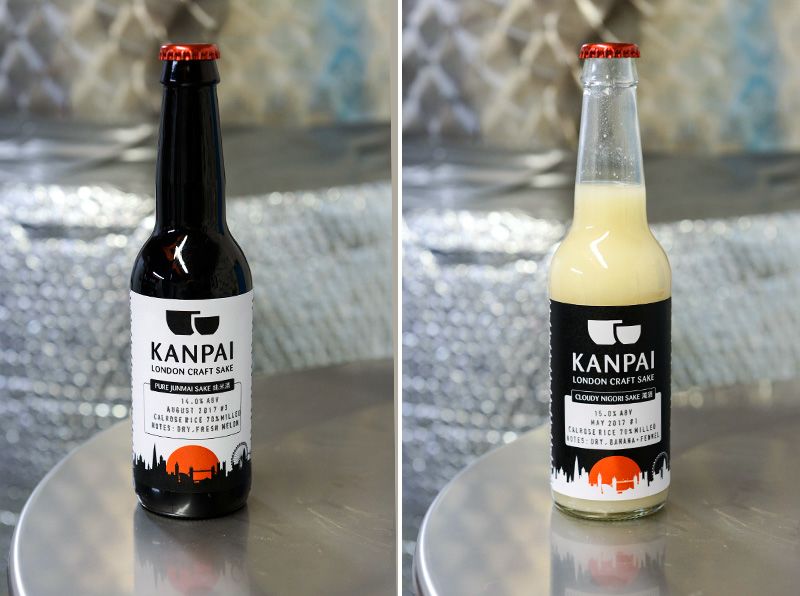 The “sharing carafes” with hand-printed labels contain the brewery’s junmai clear sake, on the left, and the cloudy nigori sake.

Their most recent batch includes an extremely dry sake and one that has been dry-hopped—a technique borrowed from craft beer, which gives the sake a distinct hoppy taste. It’s an innovation that might shock sake purists, but it’s gone down well in South London.

“Judging by the feedback, I think we’ll roll that one out as a product,” says Lucy.

Rather than traditional sake bottles, or even wine bottles, Lucy and Tom ship their sake out in craft beer bottles. Tom describes them as “sharing carafes.” There are only two kinds of label, black and white, but both have space to print the details of the brew by hand.

“Hand-printing 800 labels at a time takes its toll,” laughs Tom.

As well as selling via Selfridges, they have held more than 10 tastings in local wine shops, delicatessens, and other establishments since February. Perhaps only a third of people at these events have properly tried sake before, so Lucy and Tom encourage them to drink sake by itself or in cocktails. One of their own inventions is the “espresso saketini” (nigori sake, espresso, and Kahlúa).

The couple’s sake journey started one autumn a number of years ago when they traveled to Japan together. In between their trips to view the brilliant fall foliage, they visited a number of food and drink producers.

“Visiting breweries opened our eyes to the variety of sakes,” says Lucy, “from full-bodied to light and floral. We particularly loved the freshness of namazake, or unpasteurized sake.”

Earlier this year, Tom returned to study brewing at a well-known Kyoto brewer, Gekkeikan, and they both plan to visit northern Japan in February 2018.

Sake-brewing is an notoriously laborious process, but impressively, Lucy and Tom are running their business while also holding down full-time jobs. Lucy works in science communication and Tom in financial marketing.

In fact, their jobs have provided most of the funding for the business so far. “Rice and shipping are very expensive . . . as is London rent,” says Lucy. 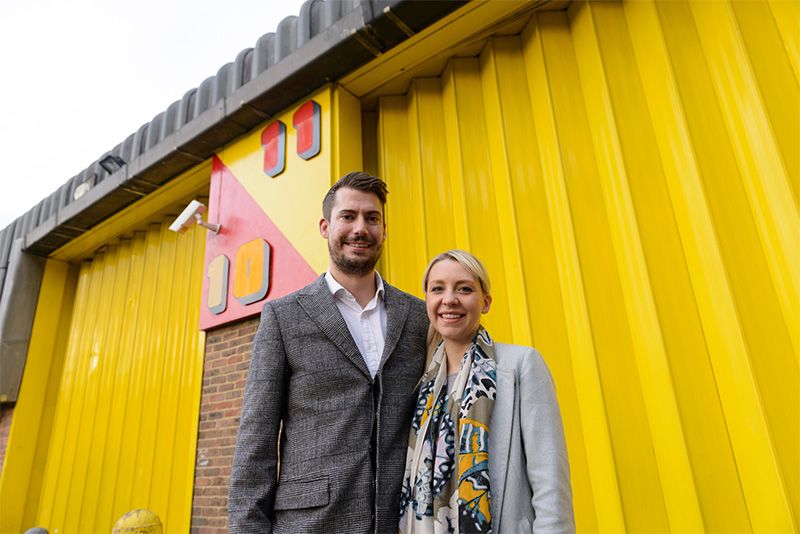 The brewery occupies just 25 square meters in a rental facility in London.

In June they ran a successful round of crowdfunding. “The support people showed has allowed us to double our space already, and also to buy some extra equipment like a pump and filter.”

As any sake brewer will tell you, the key ingredients for brewing are rice, water, and kōji, a special mold used to convert the starch in rice to sugar. So far, the Kanpai team has used sake rice from the United States and Japan, as well as imported kōji.

On advice from other brewers in London, Lucy and Tom decided to use local water, filtering it to remove hard metals and other impurities. Unlike most waters used to brew sake in Japan, London’s water is hard, but they are dealing with that by fermenting at lower temperatures.

London Craft Sake’s brewing and business model is clearly very different from in sake’s home country, and Japanese brewers seem fascinated by what they are doing. Lucy and Tom have already had a number of visitors from Japan.

“They have kind of embraced us,” says Tom. “But I try to give them a caveat before they come . . . that we are in a tiny garage in Peckham.”

“People ask us all the time if they can come for a tour of the brewery. We have to say, ‘if you have got 30 seconds free!’” Lucy jokes.

Tom notes they are targeting an “untapped audience,” people in London who have an interest in craft food and drink, but have not necessarily tried sake before. “I think that sake exporters from Japan are positive about that.”

Ironically, for all their innovation, in one respect their brewing is quite old-fashioned. There is remarkably little equipment in the tiny space, never mind high technology. This weekday evening, the brewery is almost silent except for an occasional muffled rumble from a neighboring unit, and the leisurely bubbling of the sake starter as it ferments.

Japanese brewers are intrigued by “how physical and hands-on everything we do is,” says Tom. They love that because it is harking back to how things used to be done in Japan.”