A Japanese Specialty Made in Spain

Culture Sep 13, 2018
Katsuobushi is an essential element of Japanese cuisine, with shavings from this cured, dried bonito forming the basis for many of its basic flavors. EU food regulations ban its import from Japan, but a production plant in Spain now exports it to 20 countries in Europe, thanks to the determined efforts of a single Japanese.

Seasonings like miso and soy sauce, both fundamental to Japanese cuisine, have antecedents in China. Katsuobushi, though, has its roots entirely in Japan. An essential ingredient for making the dashi stock on which Japanese cuisine is based, this dry-smoked, cured skipjack bonito, particularly the shavings made from it, has been part of the Japanese diet for millennia.

The current production method for katsuobushi was perfected during the Edo period (1603–1868). In a process spanning several months, fresh katsuo (skipjack tuna) are filleted into quarters, boiled, deboned, and dry-smoked, steps repeated several times to produce what is called arabushi. Spores of a special mold are then applied to the arabushi. Left to mature, the resulting product, now called karebushi, has a refined, mellow flavor. The filets, which by now are rock-hard, are shaved on a plane to make katsuobushi, shavings of dried bonito. 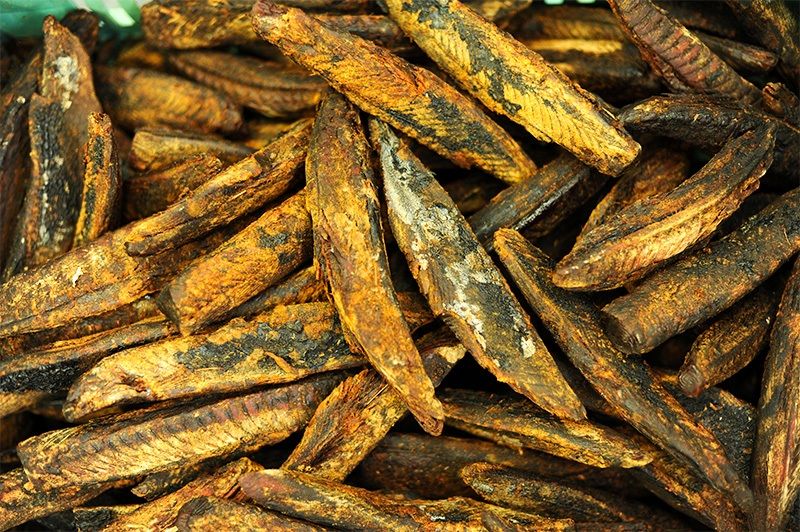 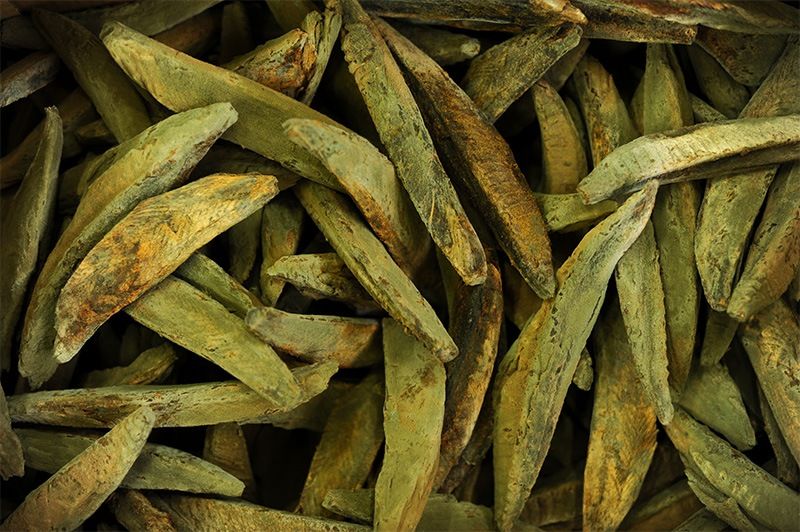 Karebushi, produced through the repeated application of mold.

Wada Sachiyuki, third-generation head of Wadakyū, began producing katsuobushi in Spain three years ago. Wadakyū, established in 1925, is a long-established katsuobushi merchant that opened its first store in Tokyo’s Nihonbashi district. Today it has a katsuobushi production base in Makurazaki, Kagoshima Prefecture, and three sales outlets in Tokyo’s Tsukiji.

Near the border with Portugal, 450 kilometers west of Madrid, lies Vigo, Spain’s largest fishing port. Wadakyu’s katsuobushi factory is a short distance away, in O Porriño. 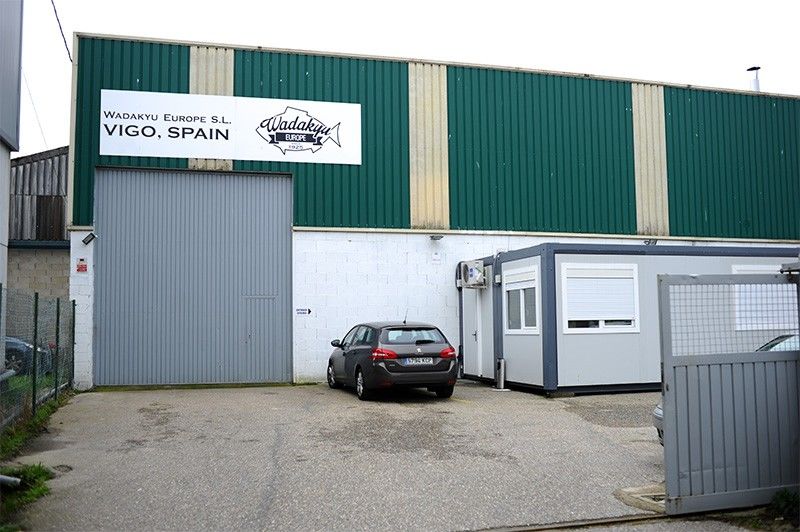 The Wadakyū factory in O Porriño. 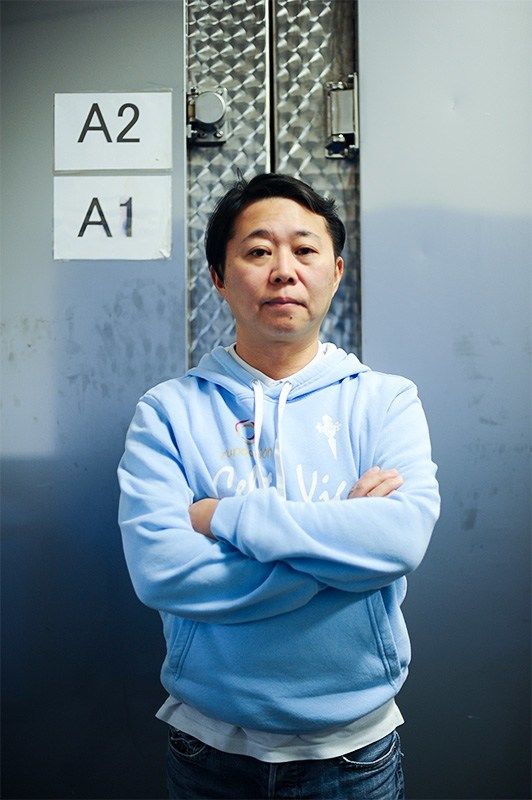 Wada relates how the katsuobushi factory in Spain came about. Upon taking over as Wadakyū’s president in 2001, he explored the potential for developing a market for katsuobushi in China, an idea he had been toying with for some time. But sensing that washoku (Japanese cuisine) was becoming increasingly popular in Europe, he set his sights on that market and traveled to London in 2008. Since he believed that the Japanese market had matured, with no further prospects for growth, he decided to find new markets abroad, although some at the company were not in favor of such a venture.

At the time, katsuobushi was not available in EU countries, due to the fact that katsuobushi contains traces of benzopyrene, a substance found in the smoke emitted during the dry-smoking process. As EU food regulations banned benzopyrene, katsuobushi could not be imported from Japan. To get around this restriction and gain a foothold in the EU market, Wada had the katsuobushi scraped at a plant in Thailand to remove the benzopyrene on its surface, after which the product was shipped to London. And beginning in 2010, he arranged for a London food wholesaler to shave the katsuobushi to produce the familiar hanagatsuo shavings, which he then marketed throughout Europe in order to develop a market. 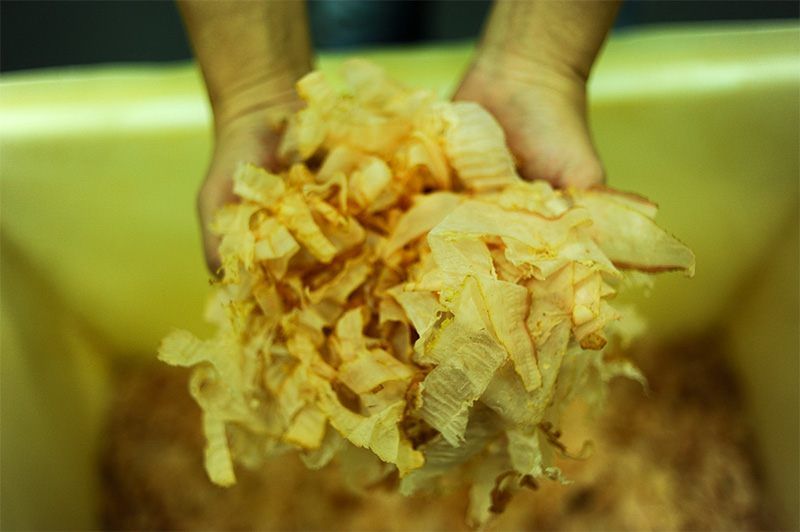 Katsuobushi shavings are the source of the dashi that flavors many Japanese dishes.

In 2014, however, Wada decided to set up a katsuobushi production facility in the EU and shifted his base to Gdansk, the Polish port. Next, in order to eliminate benzopyrene emissions, he worked with a smoker equipment manufacturer to come up with a suitable solution. After a year of trial and error experimenting with little tunny, a relative of chub mackerel, they succeeded in devising a dry-smoking method that produced no benzopyrene. The exact process being proprietary information, Wada didn’t go into details, but it’s clear that a great deal of effort was involved. The equipment was tested in Germany and was certified as emitting no benzopyrene. To this day, Wada keeps a prototype of the equipment sheathed in plastic, a reminder of the huge amounts of time and money he expended on meeting the EU regulations.

“That was a really tough time for me,” he recalls. Not only was he involved in developing a benzopyrene-free production process, he was also setting up a production plant in Poland. When he submitted the application for a building permit, the Polish health ministry went over everything with a fine-tooth comb and mandated numerous changes to meet EU regulations. The application process took longer than Wada had expected, and in the meantime construction costs had ballooned over the initial estimate.

Wada ultimately gave up on Gdansk after a year and decided to build a plant in Vigo, the EU’s largest fishing port. Since he had already been sourcing skipjack tuna from Vigo, establishing a factory there was a natural outcome of his connection with the region. 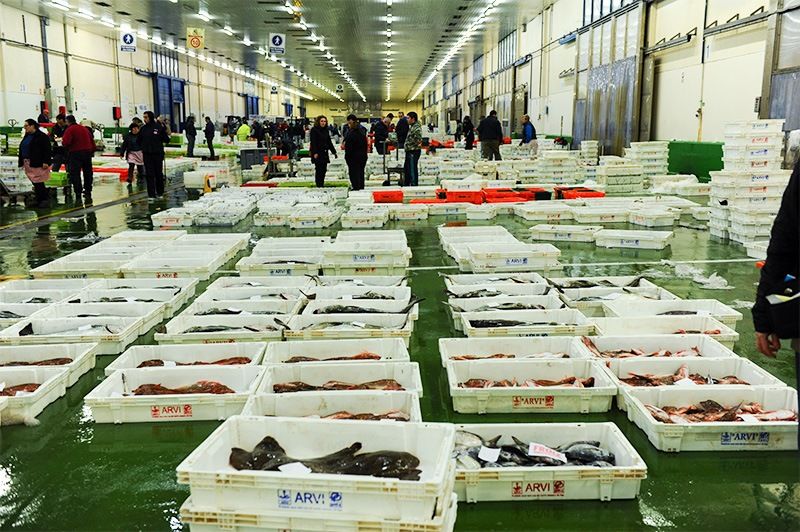 Vigo’s central fish market, where catches from the Atlantic are auctioned to wholesalers.

In early 2015, Wada headed for Spain to conduct registration procedures. Spain speedily granted the necessary permits, and soon two large trucks laden with equipment were on their way to Vigo. Occupying part of the space in a canning factory, Wada’s operation was up and running by April. The next year, seeking more spacious quarters and freedom to maneuver, Wada moved the operation to O Porriño, just inland from Vigo, where a staff of eight process 1 to 2 tons of skipjack tuna every day. 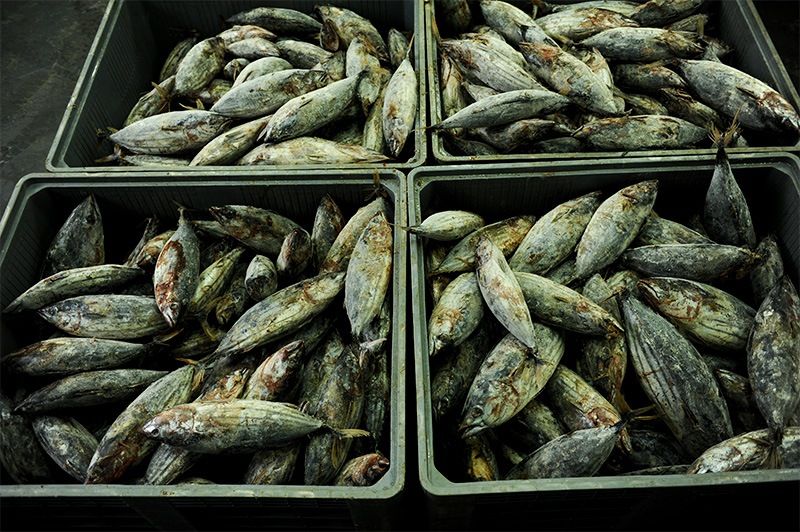 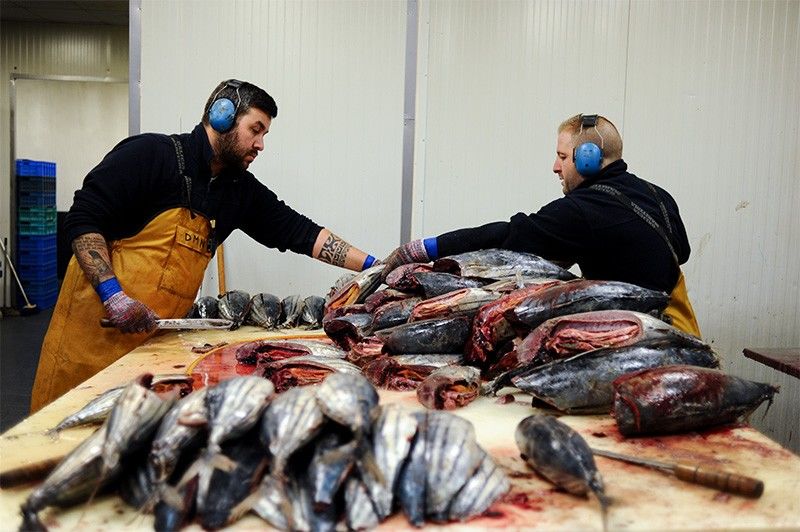 The thawed fish are filleted by hand. 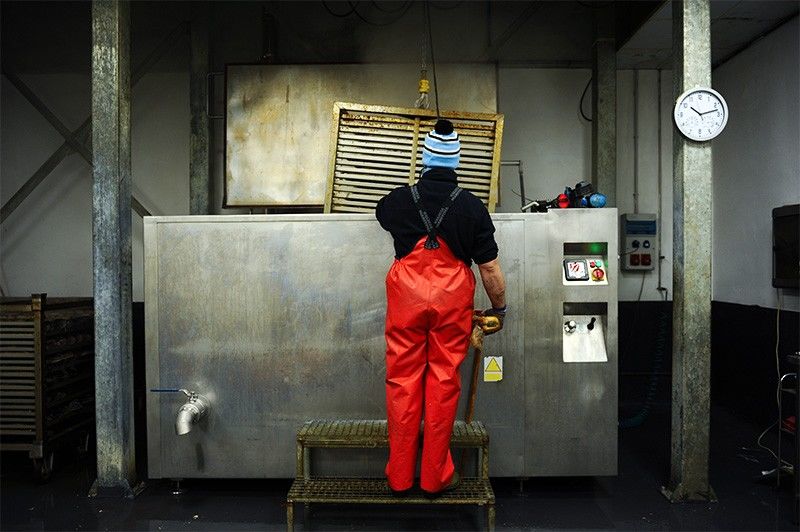 After filleting, the fish are boiled for 1 hour. They are then deboned and dry-smoked.

The katsuobushi produced in Wadakyū’s European factory is sold in 20 countries across Europe, a customer base Wada continued to develop after moving his operation to Spain. His biggest country market is Britain, while Paris is the city with the highest sales. Demand for katsuobushi in Europe is being driven by the rising popularity of Japanese cuisine. Wadakyū’s katsuobushi can even be found in the gourmet foodstuffs section of Vigo’s El Corte Ingles upmarket department store, where it retails for €7.5 (around ¥1,000) for 40 grams.

Rafa Centeno, owner-chef of the Vigo restaurant Maruja Limon, says that he began using Wada’s katsuobushi three years ago at his establishment, which boasts three stars from Michelin. “I prefer his katsuobushi to others’ because of the flavor it imparts. I use it in soups, of course, and it also goes really well with fish or legume-based dishes.” 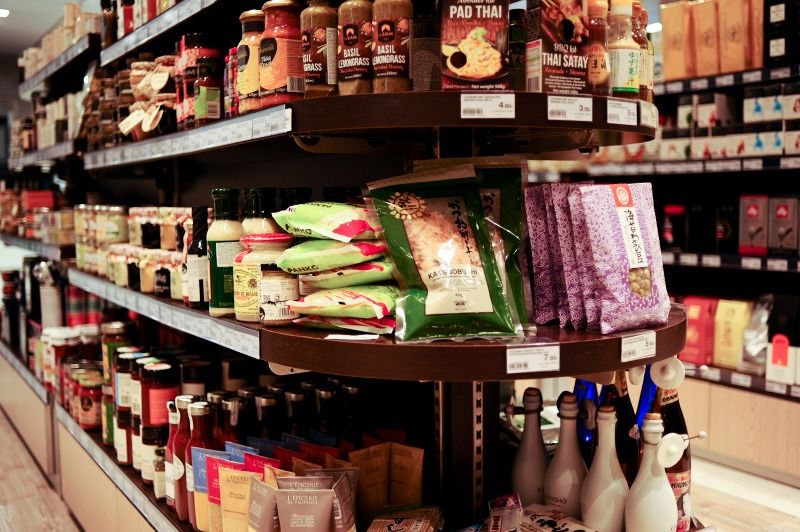 Wadakyū’s katsuobushi on the shelf at El Corte Ingles.

Ordinary Spanish households sprinkle katsuobushi on salad or olives or use it as a pizza topping, and in France some restaurants offer katsuobushi butter.

In 2016, two years after Wada began operating in Spain, a group of 10 companies, including katsuobushi manufacturers from Makurazaki, opened a plant in France. Chinese, Korean, and Vietnamese companies also began exporting katsuobushi to the EU, so competition is heating up. Even so, Wadakyū sales in the EU were €950,000 (around ¥130 million) in 2017, up 20% over the previous year.

Wada envisions expanding the business to other areas in the future. For example, he is considering producing powdered dashi from skipjack tuna, turning fish scraps generated during production into fertilizer, or processing other fish landed at Vigo port. As the third-generation head of Wadakyū, he hopes to keep the business going for many more decades, building on the bold step he took of starting katsuobushi production in Europe, something no one in the industry had ever thought of doing before. 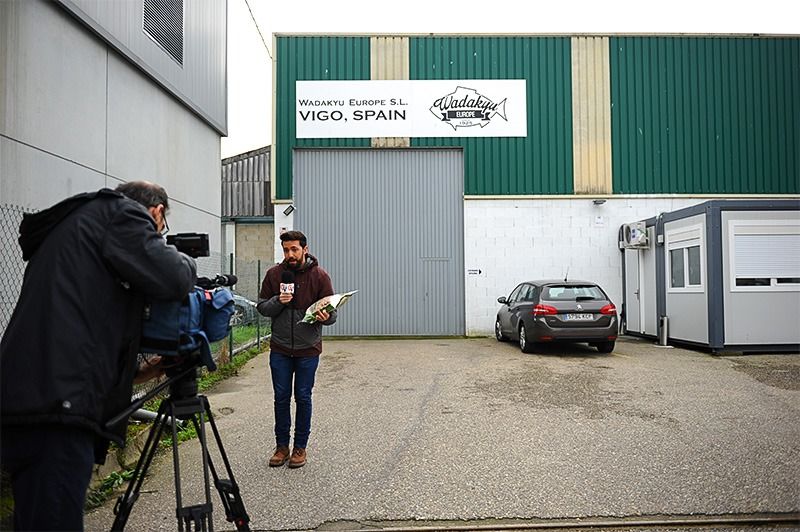 The Wadakyū factory is often featured in news reports.