Food and Drink Feb 20, 2018
Buri (yellowtail) is a fish found only in the seas surrounding Japan. While wild buri is a wintertime delicacy, cultivated varieties can now be consumed in the summer and fall as well thanks to advances in aquaculture. Buri also lies at the heart of a longstanding culinary tradition and ranks alongside maguro (tuna) and salmon as a popular food fish in Japan.

Buri (yellowtail) spawn in the East China Sea or off the shores of northern Kyūshū, and wild fry (called mojako) migrate seasonally between their spawning grounds and feeding areas further north in Hokkaidō before growing to more than 80 centimeters in four to five years. Buri is a spindle-shaped, carnivorous fish found in temperate waters with a blue spine, silver-white belly, and a yellow lateral line stretching from the eyes to the tail.

The yellowtail grows to over 80 centimeters in four to five years, migrating between Kyūshū and Hokkaidō in the Sea of Japan.

Today, wild buri is usually found in the Sea of Japan, particularly off the Hokuriku coast, but before World War II, it was mostly caught in Sagami Bay and the Kumano Sea along the Pacific coast. The restart of aquaculture—suspended during the war due to the rationing of fish feed—caused the overharvesting of mojako, however, after which young fry could no longer be found in Sagami Bay.

The fish grows quickly, reaching 30 centimeters in about a year, 50 centimeters in two years, 60 centimeters in three years, and 70 centimeters to 80 centimeters in four to five years. The buri begins making great migrations from around the third year seeking food and optimum temperatures (16–17 degrees Celsius), swimming north in the summer and autumn and moving back south to spawn in winter and spring. While closely related to the kanpachi (greater amberjack) and hiramasa (yellowtail amberjack), the buri is found only in Japan’s adjacent waters.(*1)

What’s in a Name?

The fish is called by different names depending on its stage of growth. This parallels a custom among warrior and aristocratic families in premodern Japan of conferring adult names to children after their coming-of-age ceremony. Sixteenth-century warlord Oda Nobunaga, for example, was known as Kippōshi as a child, and Takechiyo was the childhood name of Tokugawa Ieyasu—founder of the Tokugawa shogunate. Fish that take on different names as they grow were considered propitious and served when giving someone a sendoff. Before becoming buri, the fish is called wakashi, inada, and warasa in eastern Japan and tsubasu, hamachi, and mejiro in western Japan. Buri is a name reserved for fish over 80 centimeters, while hamachi is used in the west for smaller, cultivated buri. In English, it is called yellowtail or, sometimes, Japanese amberjack.

Wild kanburi (winter yellowtail) is considered particularly delicious, becoming tastier, it is said, with each snowfall. In Toyama Bay, where buri fishing goes back over 400 years, it is caught using fixed nets and shipped to the Himi fish market, where it is auctioned and marketed as “Himi kanburi.” 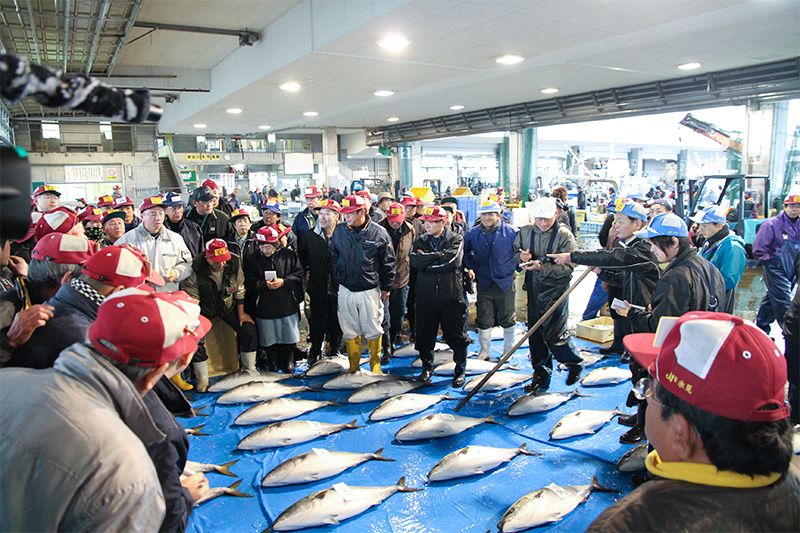 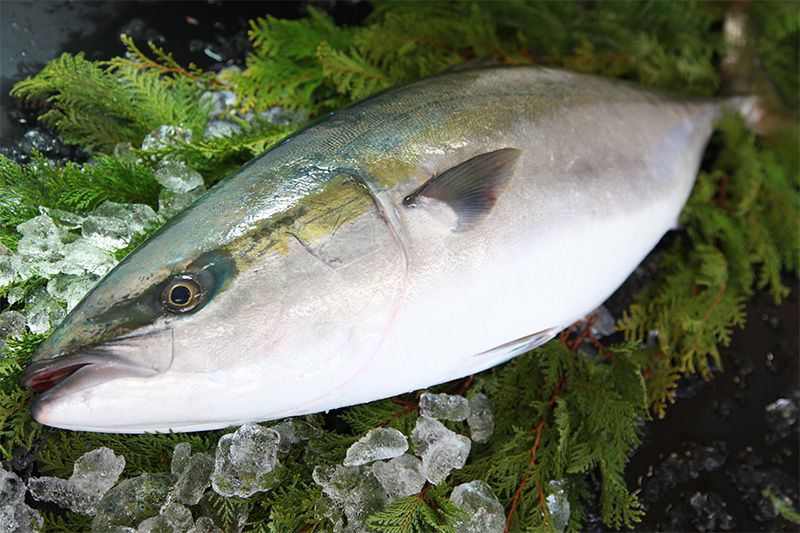 To qualify as a Himi kanburi, the fish must have been caught in a fixed net in Toyama Bay, loaded and auctioned at Himi fishing port, and weigh over 7 kilograms. (Courtesy Himi City Tourist Association)

A newspaper article from 1916 reports that 50,000 buri were loaded at Himi port in a single day following a winter thunderstorm. The story quotes an old saying about early winter sea storms being nicknamed “buri rousers.” To avoid being “awakened” from their slumber, the legend goes, fish migrating south from Hokkaidō are lured to the calmer waters of Toyama Bay and into the fixed nets of Himi fishermen. The buri caught then have a firm texture and high fat content and are considered the most delicious.

In premodern days, when people rarely had meat or fish, a dish called toshitori zakana (add-a year fish) was served as a special meal on New Year’s Eve. The name derives from the practice of adding a year to one’s age on New Year's Day, rather than on one’s birthday. The fish usually used on this special occasion was buri in the west of Japan and salmon in the east. This regional preference remains firmly in place today.

Some scholars note that the buri-salmon cultural zones divide neatly along the Itoigawa-Shizuoka Tectonic Line separating northeast Japan from the southwest. Buri caught in Toyama—belonging to the buri zone—was salted and shipped inland to such cities as Takayama in the Hida region and Matsumoto in Shinshū. The route traveled by merchants was called the Buri Highway.

The custom of giving buri as a yearend gift also persists. In the coastal areas of Toyama and Ishikawa Prefectures, the parents of a newly wedded bride send buri to the groom with the hope that he has a successful career and that their daughter will become a good wife. In Fukuoka, on the other hand, it is the groom who sends buri to his wife’s family.

Buri is offered at the altar of Kamo Shrine in the city of Imizu, Toyama Prefecture, on New Year’s Day, after which it is sliced and taken home by parishioners—the idea being to partake of the same food as the deities so as to maintain good health during the year. The custom is thought to be a remnant of days past, when the grounds belonged to Shimogamo Shrine, an important Shintō sanctuary in the ancient capital of Kyoto.

There are numerous buri-related festivals around the country, from as far south as Saga in Kyūshū to Owase in Mie Prefecture and even Jōetsu northeast of Toyama in Niigata Prefecture.

Buri can be prepared many number of ways. It can be eaten raw as sashimi or sushi, grilled with salt or as teriyaki, or simmered in broth with daikon (Japanese white radish). While it is the fat content of kanburi that makes for a savory dish, one can also boil away excess fat by dipping it in boiling water à la shabu-shabu and eaten with citrus-based ponzu sauce. Served cool, the buri-shabu becomes a summertime treat. 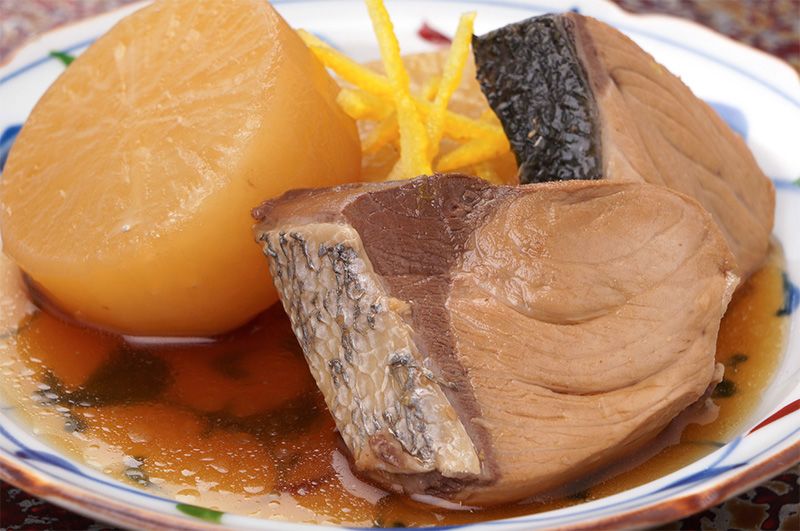 Buri simmered in broth with daikon.

Younger buri—called inada and warasa—have lower fat content and a lighter taste. They go well with Italian and French dishes, served as carpaccio with thinly sliced raw beef or fish, olive oil, and herbs or sautéed in butter with fish and vegetables.

The fish contains high levels of DHA (docosahexaenoic acid), EPA (eicosapentaenoic acid), and other important fatty acids that cannot be produced by the human body, as well as lipophilic vitamin E. Buri can thus help to prevent arteriosclerosis and high blood pressure by reducing the body’s neutral fat and LDL (low-density lipoprotein) cholesterol. It is rich in B vitamins, which aid in the metabolism of sugar and cholesterol and relieve fatigue; vitamin D, which enhances calcium absorption; and iron, helping to prevent anemia. Its red meat contains taurine, which improves liver functions. 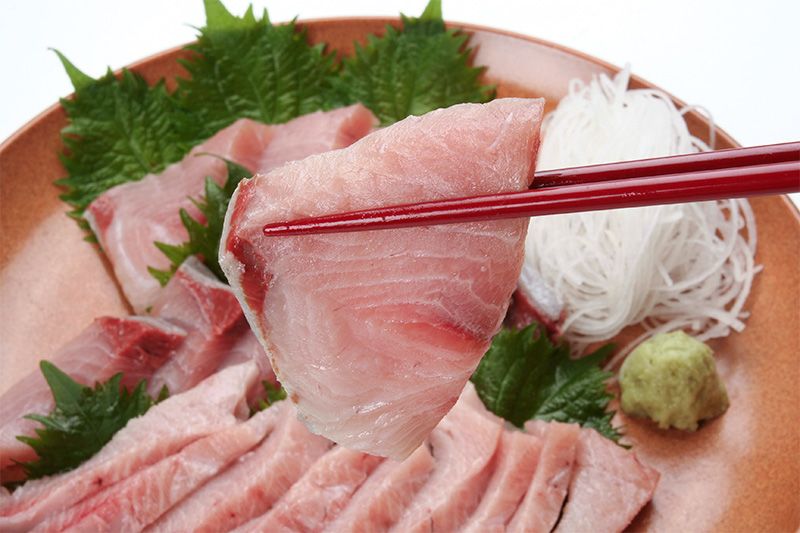 The share of cultivated fish on the market has been rising in Japan and around the world; the trend is particularly pronounced for buri, of which around 60% are shipped from aqua-farms. Japan became the first to successfully raise hamachi commercially in 1928, and buri farming continues today—in spite of wartime suspension—in locations around western Japan. Japan has since continued to lead the world in aquaculture technology. The Seikai National Fisheries Research Institute of Nagasaki, for instance, succeeded in moving up the spawning period, normally during March–May, to September–November the previous year.

Making this possible was a method developed by Kurose Suisan of Kagoshima—one of Japan’s biggest yellowtail farming companies—to produce juveniles in hatcheries after extracting eggs from healthy, mature fish, eliminating the need to catch small wild fry. The company began shipping “young buri” from June 2009 that enabled the consumption of fresh yellowtail even during the summer months. And in 2016, Hashiguchi Suisan and Hosei Suisan of Nagasaki teamed up with feed maker Apro Japan to cultivate autumn buri that reach markets in September–November. 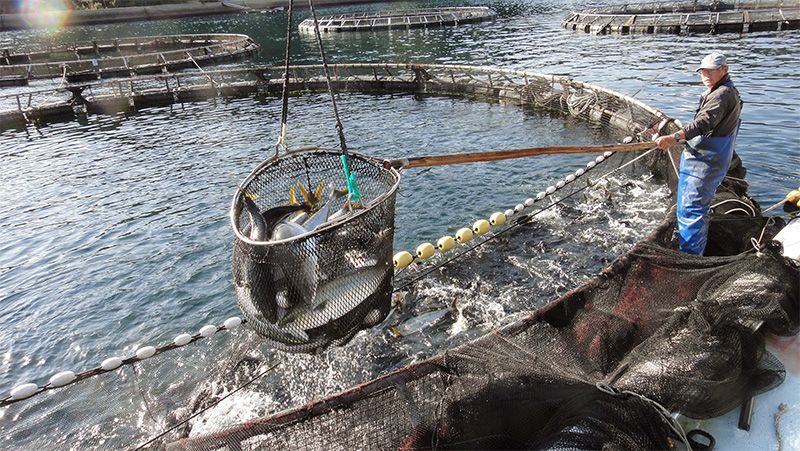 The biggest consumer market in Japan is Tokyo, a metropolis in eastern Japan with an overwhelming preference for salmon. Catch of autumn salmon in 2016 was a record low, so 230,000 tons were imported to cover the shortage. Production of cultivated buri has grown to 140,000 tons (compared with 100,500 tons caught in the wild), but this is still not enough to supplant salmon imports. Should demand for yellowtail grow, though, there is room to increase production. The future of this fish native to Japanese waters may lie in efforts to generate additional consumer demand.

The 2020 Tokyo Olympic and Paralympic Games present a golden opportunity to reach consumers around the world. Efforts are already underway to designate buri as Japan’s “national fish” and to actively promote this healthy and tasty seafood to visitors from abroad.