Mining the Past for New Gold: Artist Yamaguchi Akira

Society Culture Lifestyle May 24, 2013
Yamaguchi Akira is an artist who uses the techniques of traditional Japanese painting to explore new possibilities for contemporary art. With its humorous and contempory sensibility, his work has beguiled audiences around the world. In this interview, a French scholar of Japanese art looks at the roots of Yamaguchi’s creativity. 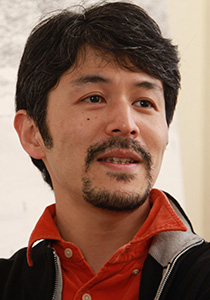 Artist. Born in 1969 in Tokyo and raised in the city of Kiryū, Gunma Prefecture. BA and MA in oil painting from the Tokyo National University of Fine Arts and Music. Known for a style that freely mixes together elements across time and space, incorporating detailed depictions of people and buildings using traditional techniques reminiscent of Yamato-e and ukiyo-e. A selection of his works has been published in book form as Yamaguchi Akira daigamen sakuhinshū (Akira Yamaguchi: The Big Picture). 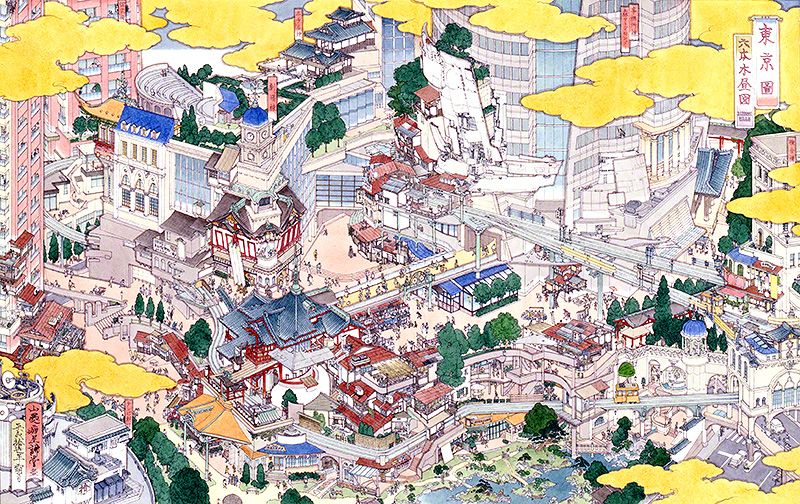 A Unique Imaginary World Beyond Time and Space

Brigitte Koyama-Richard I remember quite vividly the strong impression your work made on me the first time I saw one of your paintings. It was a depiction of Roppongi from the air, showing both castle towers and skyscrapers. The old-fashioned Japanese-style buildings seemed to coexist alongside the highrise modern skyscrapers quite naturally. When you looked closely you could see the people of the city too. There were businessmen and people out walking their dogs, But in among them, merchants from Edo days could be seen washing the windows of a skyscraper, along with a group of samurai brawling on a street corner.

At first glance it looks like a yamato-e, or traditional Japanese painting, but the addition of scenery from present-day Roppongi transforms the painting into a work of science fiction–like fantasy that transcends time and space. There’s a vivid sense that the work is a part of a living Japanese artistic tradition—but the influence of contemporary pop culture is obvious too. 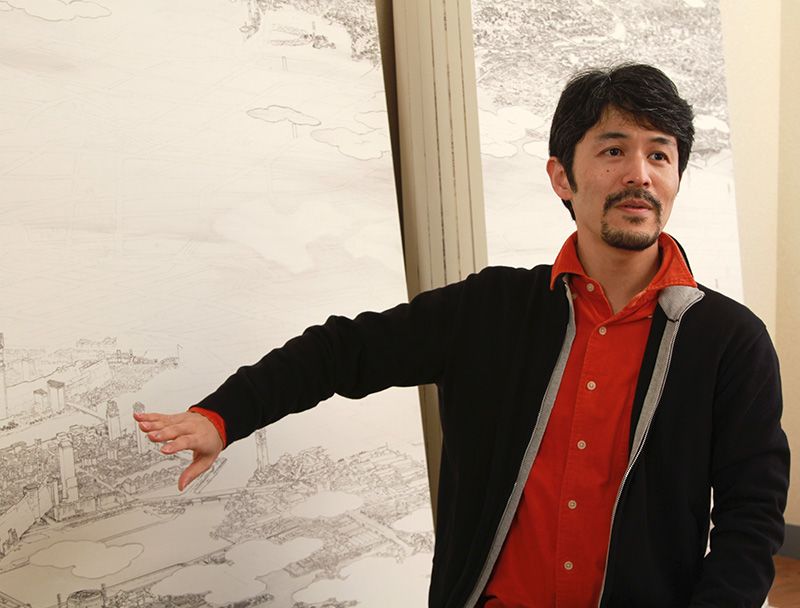 Yamaguchi Akira A lot of people seem to have the impression that I come from a traditional background in Japanese-style painting, but in fact I studied Western painting in college. All my work is done first in pen and then in oils and watercolors, rather than the traditional pigments used in Japanese painting. Some of the techniques I use are borrowed from traditional methods, but basically I’ve considered myself a contemporary Japanese artist ever since I first encountered Western-style painting.

Koyama-Richard How did you arrive at your individual approach ?

Yamaguchi To tell the truth, my current style was the result of a long struggle. There’s a tendency in Japanese art to mythologize European and American art as more advanced. The story of modern Japanese art in many ways can be read as a succession of attempts to “catch up” with the West. This started with oil painting in the late nineteenth and early twentieth centuries, and continued with abstract art in the postwar years, followed by conceptual art, installations, and so on. Basically, the same trend continues to this day. As a college student I was skeptical about that sort of approach to art, and my struggles against it led me to a dead end.

Looking back at the history of Japanese art in the modern era, I realized that there have always been pioneers who developed their own independent aesthetic art rather than simply imitating Western art. Despite their efforts, though, many of these figures ended up being more or less buried alive. Very few of them succeeded in winning a prominent place in art history. I was afraid that if things kept going that way I’d end up suffering the same fate. It got to where I couldn’t paint anymore.

Koyama-Richard How did you break out of that?

Yamaguchi I happened to see an exhibition of yamato-e paintings. I was stunned by the boldness of the composition. And then it hit me: “This is it!” I wanted to try to find a way into traditional Japanese painting as it was back before Western art reached Japan. In other words, I wanted to re-do the modernization of Japanese art for myself. Being from France, you might not understand the kind of conflict I’m describing. 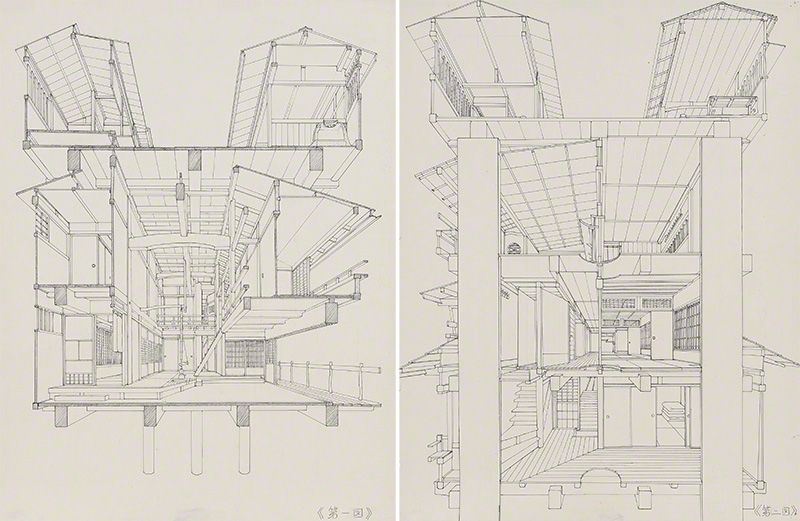 Koyama-Richard How familiar were you with traditional Japanese culture at that point?

Yamaguchi Not at all! I knew absolutely nothing about it. In those days, my idea of “Japanese architecture“ was two-by-four framed prefabricated housing, not the Katsura Imperial Villa! Most of the mental images I had of pre-modern Japan came from watching old Kurosawa movies. But when I started studying Japanese antiquities in college I visited the old shrines and temples in Kyoto and Nara, as well as the woodblock prints, screen paintings, votive tablets, battle scenes, pictures of hell, the whole thing. I lapped it up. It was like discovering another country, joyfully discovering a culture that I had known nothing about.

Koyama-Richard In the late nineteenth century, the Impressionists were deeply influenced by their contact with ukiyo-e and other types of Japanese painting. The impact of Japanese art on artists like Van Gogh and Monet, for example, is well known.

This was a moment that coincided with the earliest photographs, and part of what of drove the Impressionist revolution was this experiencing of the limits of realism. And then they discovered Japanese painting, which took a totally different approach to realism and verisimilitude from the Western perspective-based approach. I wonder whether your own experience has anything in common with the struggles of the Impressionists.

Yamaguchi That might be taking things a bit too far. I think it’s true that their embrace of a pre-modern art form like japonisme helped to open the way for a new era. You have to admire the sensitivity that led this group of people in Western Europe to take notice of the art of a small and little-known country far away while a whole empire devoted to realism was being created. The courage to change directions and shake things up at home was astonishing, really.

A Bird’s-eye View with Scattered Perspectives 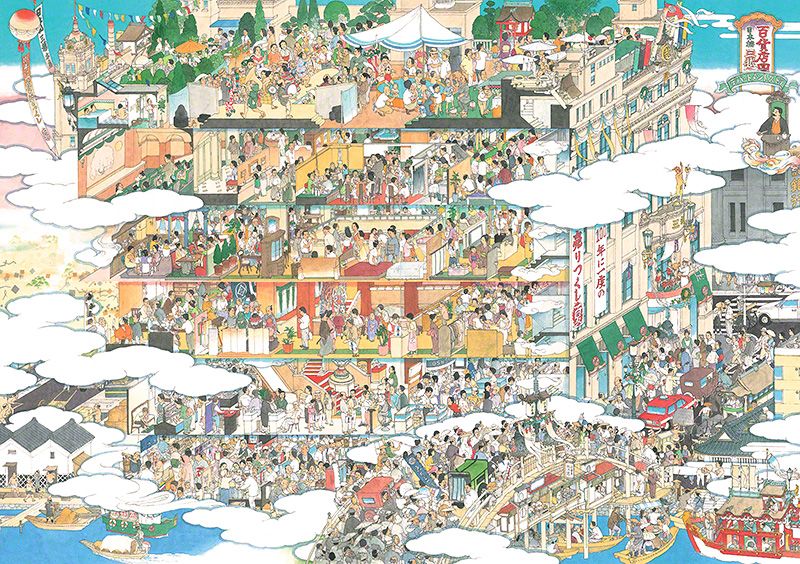 Koyama-Richard One of my favorite works of yours is a bird’s-eye view of Mitsukoshi Department Store. In this painting you adopted the rakuchū rakugai-zu, or “grand view,” technique often seen in yamato-e works for a type of painting that depicted scenic or historic sites in Kyoto and the customs of the people living there. The style, which dates back to the Muromachi period [1333–1568], was developed for paintings on folding screens, and continued to be popular all the way into the early modern period after the Meiji Restoration in 1868. The Roppongi painting that was the first work of yours I saw was also done in this style. These works seem to have emerged from a strong sense of connection to a premodern perspective.

Yamaguchi That’s right. When you study Western painting, you’re unavoidably drawn into seeing things from the standpoint of conventional perspective. The position of the viewer looking at the painting is fixed, and the composition is organized around that. Rakuchū rakugai-zu, however, isn’t based on that sort of coherent perspective. You get a different perspective for each object, as in a Google map, and these multiple perspectives are scattered throughout the picture. The same thing is true of scale. It’s like putting a bunch of differently scaled maps together to form one picture, but it doesn’t seem strange because the boundaries between them are obscured by the clouds.

Koyama-Richard Another traditional technique you use in this work is the fukinuki-yatai, or “exploded roof,” technique, which dates back to the middle of the Heian period [794–1185]. By getting rid of the roofs and ceilings, you are able to show what’s going on inside the buildings as if looking down on them from above. Using this technique, you can show people making their way down the streets to Mitsukoshi and people bustling around the counters inside at the same time. You keep expecting people from different eras to appear before your eyes, eating and shopping alongside people from the present.

Yamaguchi The painting depicts three-dimensional objects as they might appear in a two-dimensional world. There’s no attempt to hide the artificial, constructed nature of the scene. But instead of trying to replicate the superficially perfect mimicry of a photograph, I think it makes more sense to try to depict the kind of truth that might appeal to people from the inside.

Leaving It to the Viewer’s Imagination 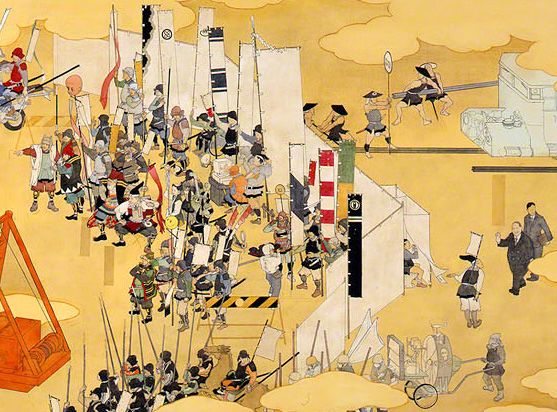 Koyama-Richard Your battle scenes convey little sense of the horror of war. It’s as if the people are setting out to have a picnic somewhere.

Yamaguchi I have no experience of war. For that reason, I’d be reluctant to try to portray battle scenes as if I had actually experienced them. Instead, I want to depict the terror of war but from the outset convey the message that this fictional, to make it clear to people who see the painting that real war is much more terrible than what is depicted in my painting.

Koyama-Richard Rather than impose an image on the viewer, you can achieve a more powerful impact by enlisting the viewer’s imagination, in other words?

Yamaguchi Some people who saw the bird’s-eye-view ink painting I did of Tokyo, which was exhibited after the tsunami disaster of March, 2011, saw in it the image of a city submerged. I didn’t have the earthquake in mind when I did that painting, but I guess people who saw it projected their own thoughts onto it. But when I heard about how people were reacting, I felt I might have succeeded in capturing something universal about cities, which came as a reassurance to me. Cities are made up of the accumulated memories of people, which have the power to transcend their own time.

Koyama-Richard Your work always reminds me of the title of Gaughin’s famous work: “Where do we come from, and where are we going?” I think the thought-provoking appeal of your work has the power to transcend borders, and would appeal even to a people with no particular interest in Japanese art . I hope it’s just a matter of time before a major exhibition of your work at one of the big museums or galleries in France introduces your work to art-lovers in Europe. Who knows, the discovery might turn out to be another major event in the history of Western art. 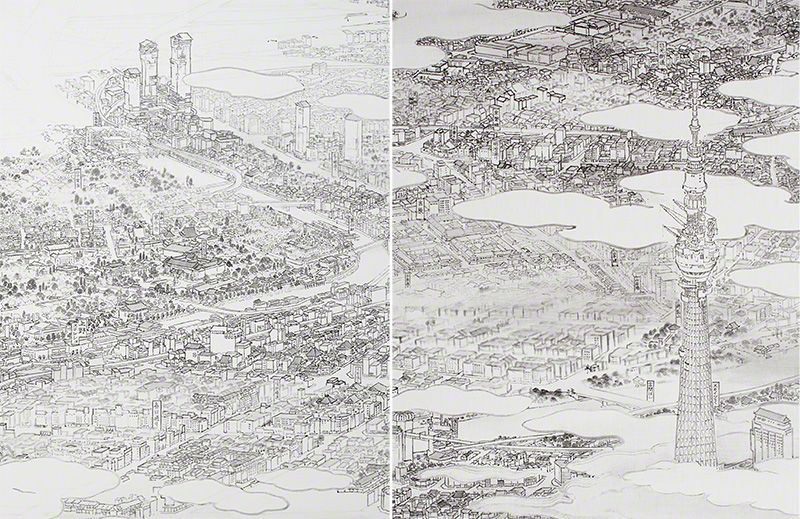 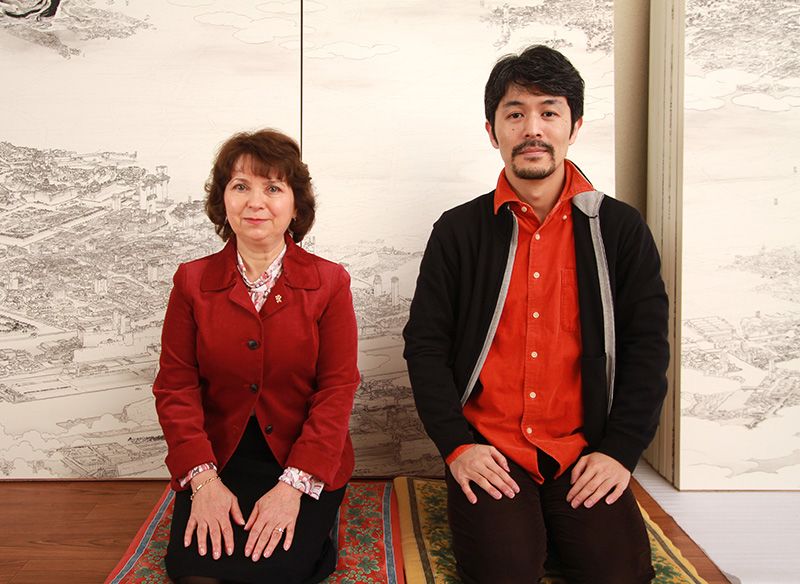