Culture Dec 13, 2013
Ōmagari in Daisen, Akita Prefecture, has long been a popular place for fireworks, and is familiar to millions of people as the host city of the famous Ōmagari National Fireworks Competition, which draws pyrotechnicians from all over the country. We take a look at the proud history and exciting present of the country’s leading fireworks competition.

Capturing the Hearts of Spectators For 103 Years

As summer draws to an end each year, the country’s leading fireworks artists gather from throughout Japan in one place to fill the night sky with light and sound. That place is Daisen, a city situated in Akita Prefecture in northern Honshū, with a population of approximately 88,000 people. Over 700,000 people from all over Japan converge on Daisen during the festival, drawn by the prospect of being able to see the very best pyrotechnical creations. At this time of year Daisen, located in a farming region with a shrinking population, experiences an explosion of up to 10 times its normal population and the streets, station, and supermarkets overflow with people. 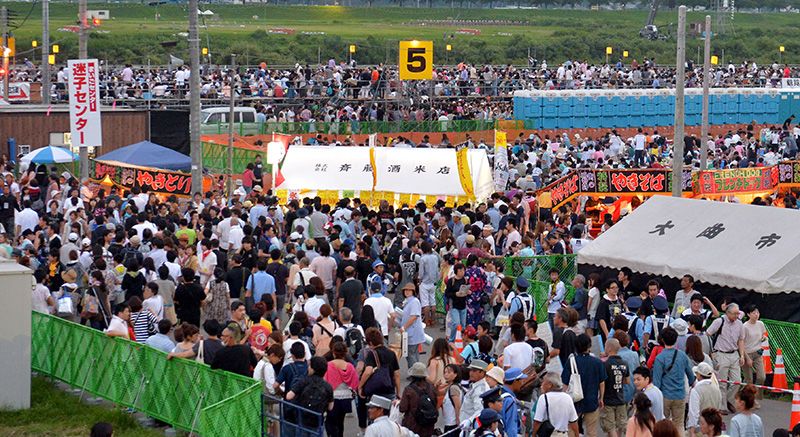 The Ōmagari National Fireworks Competition, a major event that attracts the attention of fireworks enthusiasts from all over Japan, is organized by the Ōmagari Chamber of Commerce and Industry and the city of Daisen and held on the fourth Saturday of August every year. As it is held in the Ōmagari district of the city, the event is commonly known as the Ōmagari Fireworks Display. Its history dates back to 1910. This year was the eighty-seventh time the event has been held.

The reason for its tremendous popularity lies in the high quality of the fireworks and their power to impress spectators. It’s not just a show or a festival but a competition where pyrotechnicians compete for the honor of the Prime Minister’s Prize. Ōmagari has a reputation as they put special effort and creativity into the work they do for the competition, producing special kinds of fireworks like nothing you can see anywhere else.

This year’s display was held on August 24. As usual, it was the talk of the town. On July 7, the lottery for the general public was held. A record 3,164 people queued from early morning in their attempt to get a ticket. Seating, for one space accommodating six people, is priced at ¥21,000. These tickets are very hard to get.

A few days before the event, families planning to attend the fireworks arrived by car from places all over Japan. Those without tickets camped in tents for two nights in order to enter the viewing area provided free of charge. “The Ōmagari Fireworks Display is different from others in the impact it has on you. That’s why I want to get the best seat I can. It’s worth lining up to see it,” a guy in his twenties from Yokohama said excitedly. By the time gates were opened on the morning of the event, a queue of more than 6,000 people had formed.

The Olympics of Pyrotechnics

For pyrotechnicians, the Ōmagari Fireworks Display has a special status. Around 30 fireworks specialists from all over Japan are chosen for their prowess in the art. Three categories are set up―daytime fireworks that decorate the sky with their colorful smoke, warimono or chrysanthemum-type fireworks, and “Creative Fireworks.” Unlike other firework competitions, entrants at Ōmagari must participate in all three categories. Participation is limited to those with high-level skills. The high level of overall ability is the reason why this event is referred to as the pinnacle of firework displays.

A local Ōmagari pyrotechnician, Konno Yoshikazu of the fireworks maker Kita Nihon Hanabi Kōgyō, won the prestigious Prime Minister’s Prize in 2009. “We were so happy to receive recognition of our work at Ōmagari. Since then we’ve received orders from customers who specifically request the firework that was acclaimed as number one in Japan.”

At this August’s event, 27 fireworks manufacturers took part and approximately 760,000 spectators gathered under the evening sky. As the colorful images bloomed against the pitch-black backdrop, cries of delight and sighs of admiration escaped from the lips of spectators. Some were even moved to tears. Each work is packed with art and inspiration.

Take for example, traditional warimono, which are launched one at a time. The warimono at Ōmagari have a diameter of 30 centimeters—producing a circle approximately 300 meters in diameter when they explode. Even more impressive than the size are the beautiful layers of colors: constantly changing combinations of red, blue, orange, and yellow spreading out in concentric circles. 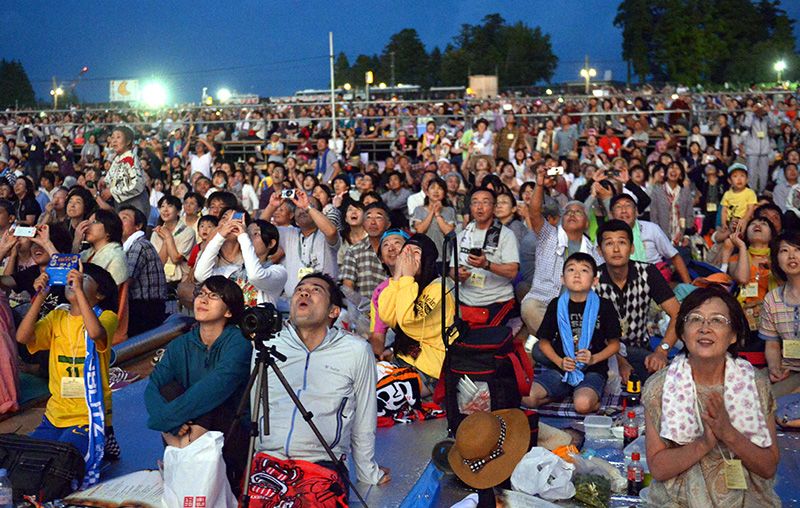 The Ōmagari Hanabi Club Deputy President, Konishi Kōichirō, said that this overlapping of colors is one of the trademarks of Japanese fireworks. In many other countries, there is little variation of colors, and artists work to create excitement by letting off the fireworks in quick succession. Japanese pyrotechnicians make warimono fireworks one at a time, by hand, as a labor of love. Packing the fireworks with the granules of explosive is a delicate process in which tweezers are used—an encapsulation of the distinctive style of Japanese craftsmanship known as monozukuri.

Creative Fireworks are also very impressive. The first fireworks to deviate from the conventional round shape appeared around 50 years ago in Ōmagari. It was decided that fireworks could be triangular or square. Creative Fireworks appeared on the scene. Pyrotechnicians choose a striking name for their creation and get two and a half minutes to launch fireworks of various shapes, accompanied by music.

Haga Kakō of Miyagi Prefecture, an area affected by the earthquake and tsunami disaster of March 2011, launched a Creative Firework titled “Flowers Will Bloom—Light of Hope.” As the charity song (“Flowers Will Bloom”) created to support recovery after the disaster played softly, fireworks resembling morning glories and sunflowers bloomed one after another in the evening sky. Like flowers blooming on the ground, these firework flowers appeared to represent the hope that the disaster-affected areas will be born anew. Spectators were deeply moved by the message from these beautiful fireworks and applauded enthusiastically.

The Fleeting Beauty of Japanese Fireworks 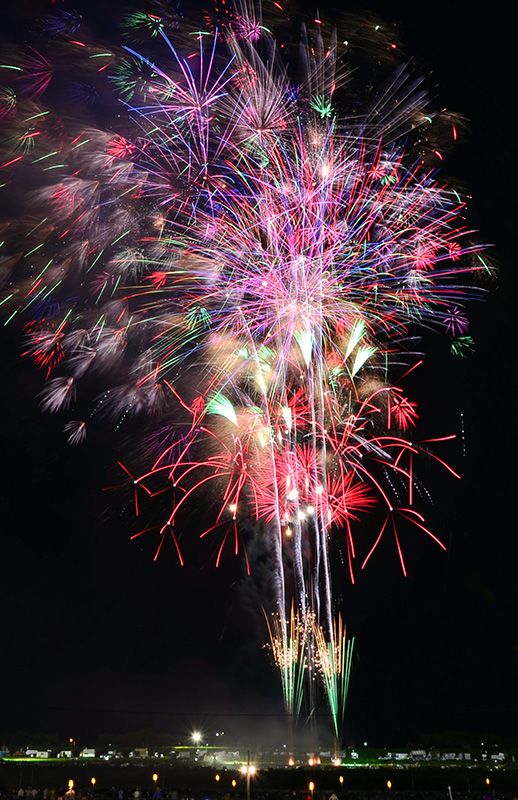 Creative Fireworks—lighting up the evening sky with vivid colors.

The appeal of Japanese fireworks is recognized by many. Sometimes the power of that appeal can be quite surprising. One person deliberately built a house close to the Ōmagari Fireworks Display site to be assured of a good view. Another man used fireworks to propose—successfully—to his girlfriend. Large crowds at fireworks displays are a scene common to all of Japan, not just Ōmagari. Why are Japanese people so captivated by fireworks?

Ishii Takako, secretary of the Nihon Hanabi Kanshōshi Kai, a fireworks appreciation club, says: “One reason is that fireworks are an artwork that last only for a moment. Unlike paintings or photos, fireworks are gone in a flash. Moreover, no two fireworks are exactly the same. It’s because of the fleeting beauty of fireworks that so many people are drawn to them.” Konishi, of the Ōmagari Hanabi Club, agrees. “Fireworks are ephemeral, but their beauty lingers on in our minds. Fireworks have the power to go straight to people’s hearts.”

Ōmagari Fireworks in Berlin During the Cold War

Ōmagari fireworks displays were held in Germany four times during the 1970s and 1980s. Towards the end of the Cold War, in 1987, a display of Ōmagari fireworks was held in West Berlin. A spokesperson for the group visiting from Ōmagari stated: “In Berlin, there may be a wall on the ground but there is no wall up in the sky. We hope that both those in West and East Berlin will be able to enjoy our fireworks.” The number of spectators that day is said to have reached more than 1.5 million on both sides of the Berlin Wall.

The aim of many people in the city is to make the Ōmagari Fireworks Display into a festival that attracts people from all over the world. The time may be approaching for Ōmagari and its celebration of fireworks to step onto the global stage. After all, the Japanese are not the only people who are moved by that fleeting moment of beauty. Love of beautiful fireworks knows no borders.