Culture Dec 30, 2013
Japanese woodblock prints had a major influence on the development of European modern painting. Ukiyo-e continue to be extremely popular around the world, but few people know much about the original uses to which these prints were put back in the Edo period. Brigitte Koyama-Richard, a French expert on Japanese art, provides an introduction to the world of ukiyo-e.

Ukiyo-e exhibitions continue to draw crowds in France and many other countries today. The popularity of ukiyo-e and other Japanese art forms dates back to the late nineteenth century, when an unprecedented boom in Japanese pictorial art gave rise to a new art movement: japonisme. Previously, ukiyo-e and Japanese pictorial art in general had only been known to a small coterie of connoisseurs. However, the number of ukiyo-e fans suddenly increased with the holding of world expositions, and the appearance of shops specializing in fine art from the Far East.

Among those who took an interest in the beautiful and colorful ukiyo-e around this time were many artists: the painters Manet, Degas, Monet, and Van Gogh; woodblock print artist Bracquemond; sculptor Rodin; and writers Edmond and Jules de Goncourt. Until the 1890s, ukiyo-e could still be bought very cheaply.

This popularity of ukiyo-e in Europe came as a surprise to people in Japan. In Edo Japan, ukiyo-e were considered less as works of art than as ordinary parts of everyday life, like toys or as textbooks, as well as being a medium for conveying news and advertisements. In this article I want to take a look at the cultural background of the Edo period that produced ukiyo-e and consider the roles they played in people’s lives.

The birth of ukiyo-e is closely intertwined with the formation of merchant class culture. The daimyō, or feudal lords, were required to spend each alternate year in Edo. This meant borrowing huge amounts of money from merchants to cover the costs of maintaining two residences and traveling from their home regions to the shogun’s city with their impressive retinues. This spurred the development of a sophisticated monetary economy and this flourishing commerce created a prosperous merchant class culture. It was in this context that the first ukiyo-e appeared. They advanced technically as refinements were made in response to consumer demand.

Ukiyo-e include paintings done by brush but in European languages they are generally known as “Japanese woodblock prints.” The techniques used in woodblock printing were imported from China and used for printing Buddhist scriptures and their illustrations. Beginning in the 1660s, artists began to use the technique for single-sheet, stand-alone prints, rather than just text illustrations. The artist Hishikawa Moronobu (d. 1694) was the first to make a single-sheet print, triggering rapid progress in woodblock printing.

Early ukiyo-e were referred to as sumizuri-e (black ink prints) and were printed on washi paper with sumi (black ink). People began to want prints with color so tan, a pigment made from sulfur and mercury, was used to paint colors onto the prints. These were called tan-e. In the eighteenth century, these were joined by beni-e,which used a pigment extracted from safflowers, and urushi-e, which used black lacquer.

By the mid-eighteenth century, artisans were able to make up two- and three-color prints. The appearance of the benizuri-e was a major breakthrough. Following on from benizuri-e, Suzuki Harunobu (1725-1770) started to create multicolored woodblock prints called nishiki-e.

Division of Labor in Ukiyo-e Production 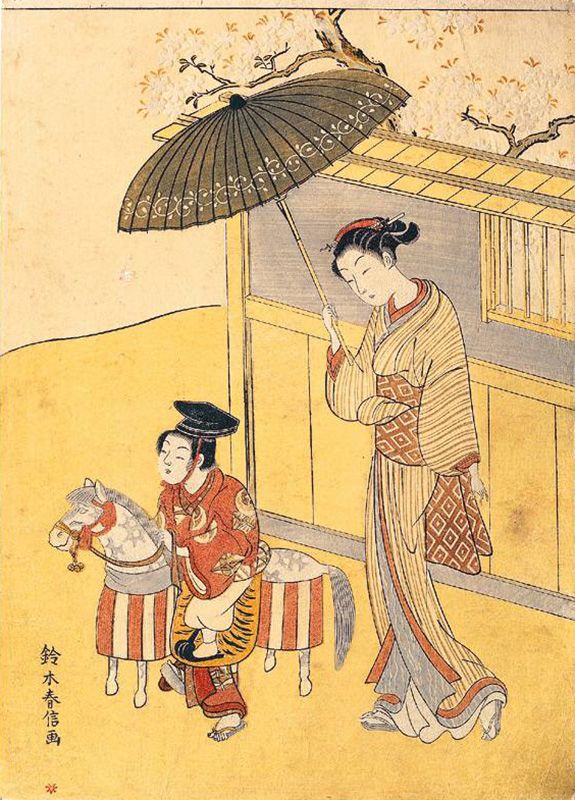 Although nishiki-e were initially quite expensive, the price soon dropped until they cost roughly the same as a bowl of noodles. Making ukiyo-e is a collaborative process. First, the publisher commissions a painter to create the original design, called a hanshita-e, by painting it on paper with black ink. After the painting was passed by the censors, it was pasted onto a block of wood and carved by the carver, and finally, printed by the printer.

At the time, the publisher played an extremely important role. One renowned publisher, Tsutaya Jūzaburō (1750-1797) discovered and employed such talented painters as Kitagawa Utamaro (1753-1806), Katsushika Hokusai (1760-1849), and Tōshūsai Sharaku. Ukiyo-e were sold by special shops called ezōshiya, or by street hawkers or peddlers who handed them over to customers rolled up in cylindrical form, similar to the way in which posters are sold today.

Ukiyo-e made popular souvenirs of Edo as they were not heavy or bulky. They were not unseated from their position of popularity until the invention of photography in the nineteenth century.

Ukiyo-e Used in Everyday Life and for Advertisements

Following on from picture calendars, many ukiyo-e started to be produced for specific purposes. Commerce flourished in the Edo period, and especially in the late Edo period, ukiyo-e were used to advertise eating and drinking establishments and the clothes shops that evolved into today’s famous department stores. An ukiyo-e by Utagawa Hiroshige (1797-1858) depicts the Daimaru kimono shop, forerunner of today’s Daimaru department store. 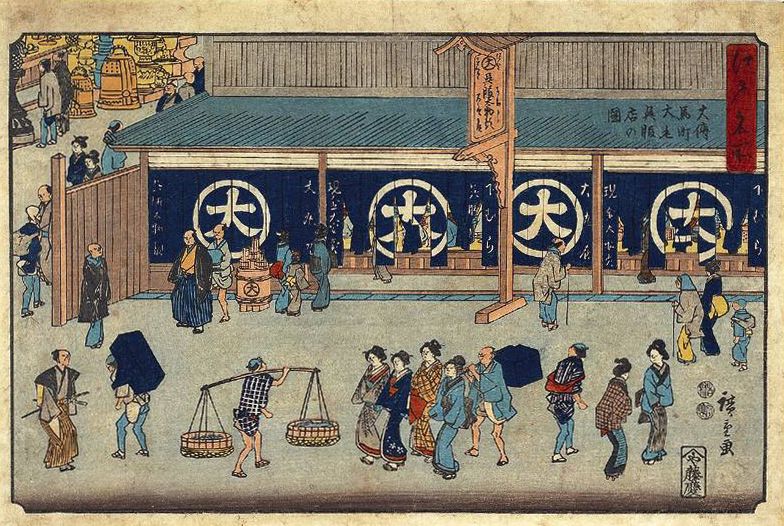 Infectious disease and epidemics were a serious health threat at the time; ukiyo-e depicting foods that were believed to be effective in preventing or treating such diseases sold well—as did others depicting foods thought to be harmful to the health.

Ukiyo-e were also used to advertise cosmetics, especially white face powder and lip rouge. In those days, three colors were used in cosmetics: white face powder; red lip rouge; and black for the eyebrows and for staining the teeth of married women. There was also a fashion for women to imitate prostitutes by coloring their lower lip green. (See the lower left picture.) Pure rouge, which was expensive, is said to have been applied layer over layer to achieve an iridescent effect.

Ukiyo-e as a Medium for Setting Fashions

The pleasure quarters of Yoshiwara and its famous courtesans were often the subjects of ukiyo-e. The prostitutes of Yoshiwara were the source of the latest fashions for hairstyles and makeup. Despite their sumptuous kimono, however, the lives of the courtesans were hardly enviable. Many lower-ranking courtesans in particular died young.

Ukiyo-e of beautiful women reached a peak with the appearance of Utamaro. Ōkubi-e, close-up portraits of beautiful women that used powdered mica in the background, were extremely popular. As well as courtesans, kabuki actors were another popular subject. A custom arose of imitating courtesans and actors, and ukiyo-e of actors were used in a manner similar to still pictures of modern day actors. The most famous ukiyo-e of actors are those created by Sharaku. Although many hypotheses exist as to just who Sharaku was, his identity remains a mystery to this day.

From the early nineteenth century onwards, journeys and pilgrimages became popular, giving birth to the wonderful landscape prints of artists such as Hokusai and Hiroshige. These prints familiarized people in Edo and the other cities with the famous scenic sights from around Japan. 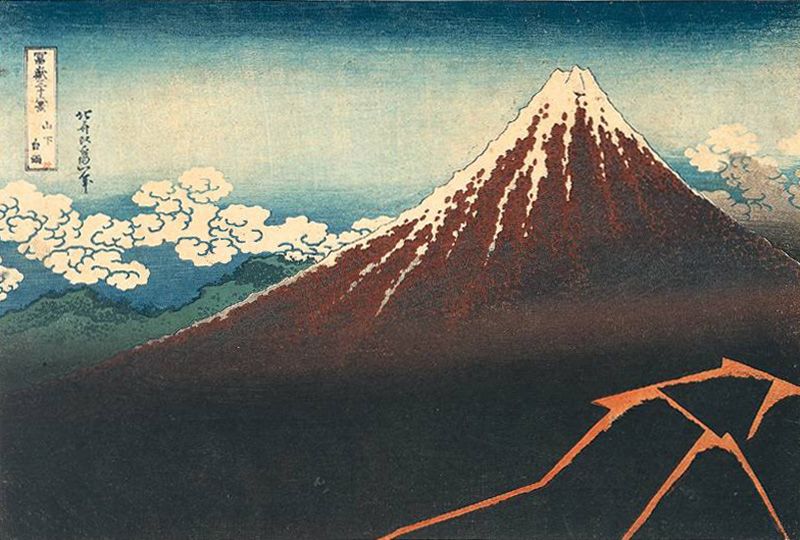 The Role Played by Ukiyo-e in Education and Spreading Information

The Edo period saw educational opportunities began to expand beyond the ruling elite for the first time. As well as schools for children from samurai families, private educational institutions called terako-ya taught the children of merchants, artisans, and farmers. Many ukiyo-e show children at their studies: crying, laughing, and playing. Ukiyo-e were used to help children with their reading and to learn the names of birds and flowers. After Japan reopened its doors to the world after the Meiji Restoration in 1868, ukiyo-e prints showing the alphabet and basic English vocabulary also made an appearance.

No one would think of cutting up an ukiyo-e print today, but in the Edo period many ukiyo-e were used for playing with cut-outs such as dress-up dolls and for making models. Both children and adults enjoyed playing traditional board games with ukiyo-e. Pictorial puzzles and shadow pictures were also popular. 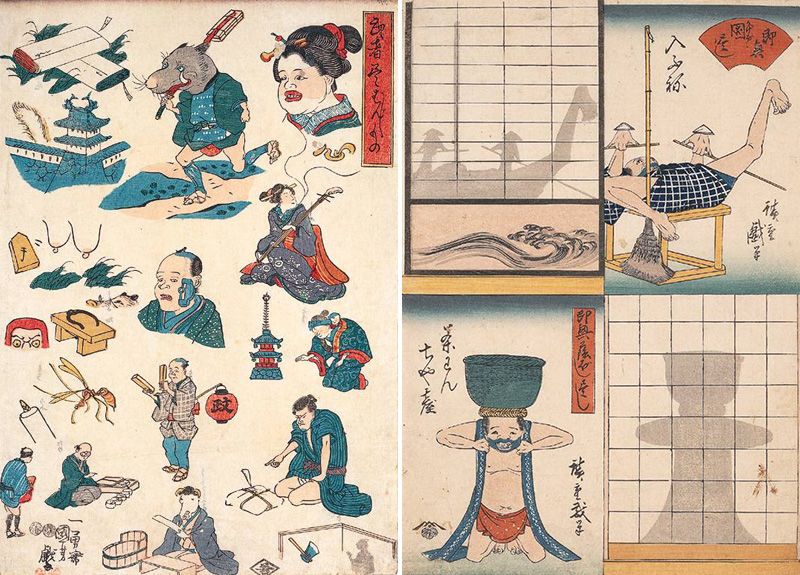 By the end of the Edo period, interest in foreign countries was widespread throughout Japanese society. This prompted the publication of large numbers of ukiyo-e depicting the lives of foreigners. In a time before national newspapers, ukiyo-e played an important role in conveying information to far-flung regions of the country. News of events such as the deaths of kabuki actors, natural disasters, and crimes were all used as material. Ukiyo-e depicting famous samurai, ghosts from horror stories, and Japanese goblins were also popular. 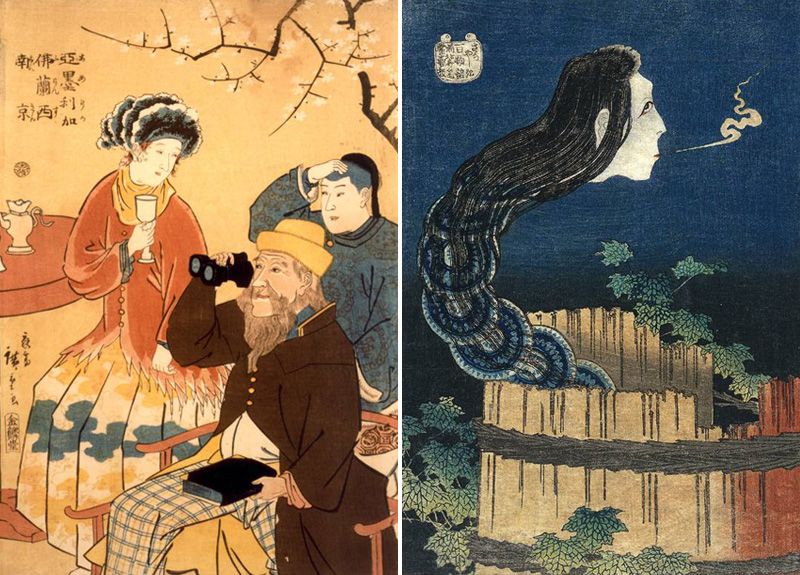 Ukiyo-e Refined as Works of Art

Of all the different types of ukiyo-e, it is perhaps the surimono (privately issued prints) that are the true works of art of the genre. Surimono were privately commissioned and not sold to the general public but given away as presents by the person who ordered the surimono. Therefore, they were not subject to censorship. The best quality paper, extravagant pigments, intricate techniques such as embossing and gradation, as well as gold and silver powder were all used to produce extremely beautiful prints. As with other prints, surimono were usually viewed by holding the print with both hands at a slight angle to enjoy the minute variations in the color and gloss of the print.

During the Edo period, the size of the paper used for ukiyo-e gradually changed and eventually became standardized. Initially, ukiyo-e used the full size sheet of hōsho paper, a fine-quality white Japanese paper used for ceremonial purposes. However, this changed to half the size, then a third of the original size and even smaller sizes later on. Hashira-e (pillar prints) especially had a strong decorative appeal. They were often mounted and displayed in the tokonoma (alcove in Japanese-style rooms) in place of expensive paintings. Hashira-e were also pasted on pillars too.

The other day I bought some albums of Japanese obscenities. They delight me, amuse me, and charm my eyes, I look on them as being beyond obscenity, which is there, yet seems not to be there, and which I do not see, so completely does it disappear into fantasy… ”
(Edmond et Jules de Goncourt, Journal, Mémoires de la vie littéraire)

Japanese ukiyo-e have influenced artists throughout the world. They continue to fascinate us today. Ukiyo-e are made entirely by hand and the processes involved in their production inspire wonder and admiration. The level of perfection that exists in ukiyo-e can only be achieved by artisans who are absolute masters of their art.