Culture Apr 21, 2017
Black Raku chawan, or tea bowls, are currently gaining global attention. The founder of the Raku family of potters created this implement at the request of Sen no Rikyū, who elevated the Japanese tea ceremony to entirely new levels of refinement. What is the allure of these tea bowls that crosses national borders? We asked Raku Kichizaemon XV, the current head of the Raku family, about their appeal. 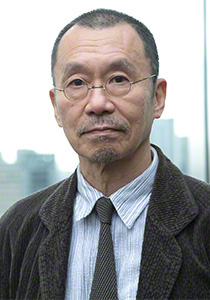 The black Raku tea bowl made by Chōjirō, the first-generation head of the Raku potter family, seems totally undecorated, lacking gaudy color or elegance of form. Made in the late sixteenth century, this piece was commissioned by none other than Sen no Rikyū, the father of the “way of tea.” The creator fashioned the bowl so it would nestle in the palms of the drinker’s hands, as if he or she were holding still-malleable clay. Hidden within the tranquil appearance of this smallish tea bowl are the deep spirits of both Chōjirō and Rikyū, for whom the philosophy of wabi-cha—the simple, austere, frugal tea ceremony that came to be in the flamboyant Momoyama period (1568–1603)—was as important as his own life. 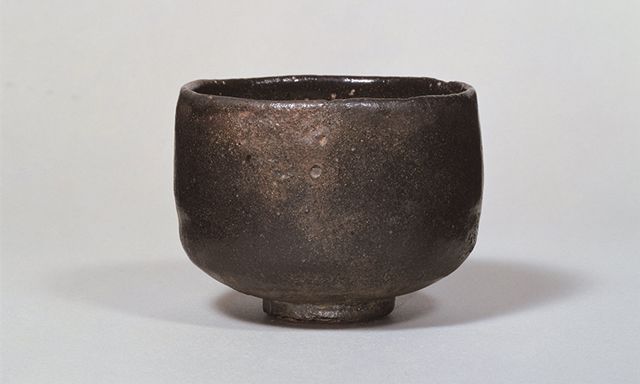 In our own era, Raku Kichizaemon XV, the current head of the Raku family, has launched an unprecedented plan: to take these aesthetic bowls—created with techniques transmitted only from father to son, from the first generation of the Raku family all the way to the upcoming sixteenth generation—and exhibit them outside of Japan, in places not familiar with the tea ceremony culture. Exhibitions in Italy, France, and the Netherlands in 1997 were followed by another exhibition of approximately 170 works in the Los Angeles County Museum in the United States in 2015, as well as exhibitions at the Hermitage Museum and the Pushkin State Museum of Fine Arts, Russia’s two biggest art museums. Around 190,000 people visited the exhibitions. The Raku tea bowls, embodying the classical Japanese aesthetic concepts of wabi and sabi, transience and imperfection, were enthusiastically received during their tour. This in turn made a great impression on the Raku family. 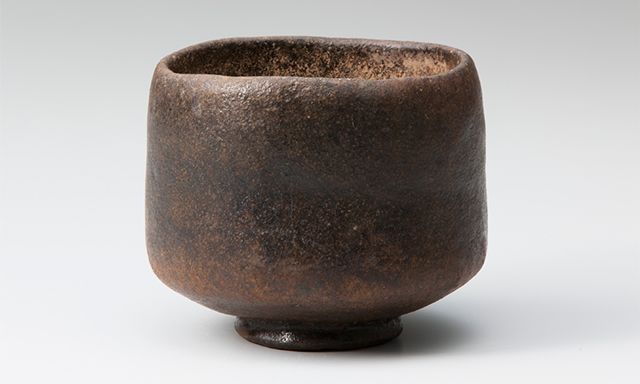 Black Raku tea bowl named Kaburo (Child Attendant). By Chōjirō. Momoyama period (sixteenth century). Collection of the Omotesenke Fushin’an Foundation. Rikyū is said to have been extremely fond of this bowl. The Omotesenke family customarily use this vessel only for the memorial services for Sen no Rikyū.

The Intensity Concealed in Stillness

Kichizaemon speaks about the impact of the tour on his own views of the art.

“At the Paris exhibition at the Japan Cultural Institute, many French people were gazing at a Chōjirō’s black Raku tea bowl for a long time. I asked a silver-haired woman her impression of the piece, and she answered: ‘It’s so still.’ I mentioned the Romanesque churches in Italy, places where I often sought stillness and quiet when I was studying there long ago. ‘There’s no lack of still places and quiet artistic expressions in the West,’ I said. ‘What’s the difference between Western stillness and that of Chōjirō?’ Her reply—that she thought the nature of the tranquility is different—made a great impression on me.”

While this woman could definitely sense the difference in the nature of tranquility, she said she would need a deeper knowledge of Japanese culture to put it fully into words. At that time, Kichizaemon intuitively felt that Westerners nowadays were trying to grasp the essence of Japanese wabi. This was something different from the European attraction to Japonism in the late nineteenth century, when artists like Vincent van Gogh (1853–90) and Paul Gauguin (1848–1903), amazed by the design qualities and innovative remodeling in Japanese ukiyo-e prints, attempted to incorporate features from these imports into their own artistic styles. Today, Kichizaemon felt, visitors to the exhibition were sounding out the aesthetic concealed inside Chōjirō’s black Raku tea bowl, something that transcends decoration and design.

Raku tea bowls occupy a unique space in the world of tea because they strongly embody the aesthetic of Rikyū’s wabi-cha, the tea ceremony style strongly associated with the aesthetic sense of rustic simplicity. The roots of Raku tea bowls lie in the sosansai, or three-colored glazed wares; Chōjirō’s father brought the technical skills for making this ware with him when he immigrated to Japan from China. Chōjirō took this type of colorful pottery and purposely converted it to monochrome tones in a strong artistic statement negating what was then common practice in the world and rejecting values that he viewed as overused. “That’s why the stillness in Chōjirō’s bowls in intrinsically deep,” explains Kichizaemon. “Something that is deep is strong even if it is still. In the absolute pursuit of that stillness in a work, the artist makes its intensity evident to those who view it.”

“There are two kinds of Raku tea bowls,” notes Kichizaemon. “There’s the classic black bowl that has come to symbolize the school; there’s also the red bowl. This is not a red glaze, but the actual color of the brownish clay itself—something to be appreciated for its texture and color.” The iron in the clay oxidizes during firing in the kiln, making the finished tea bowls turn red. That unsophisticated expression of the clay is in tune with the wabi spirit, he explains. 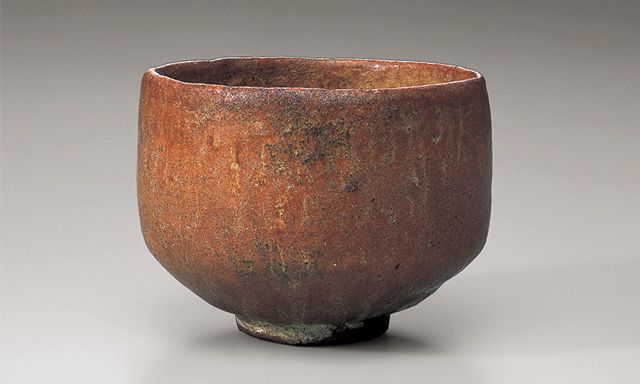 Red Raku tea bowl named Muichibutsu (Nothing). By Chōjirō. Important Cultural Property. Momoyama period (sixteenth century). Collection of the Egawa Museum of Art. Expressing the quintessence of Rikyū’s wabi-cha with its tranquil appearance, Muichibutsu is a celebrated bowl with a strong presence.

Each tea ceremony is a once-in-a-lifetime encounter. Raku tea bowls, too, are each one of a kind; they cannot be made to turn out exactly the same. The kiln for firing black bowls contains an inner kiln that performs the function of a saggar, enclosing and protecting each bowl as it is fired, one at a time. The traditional kiln used to fire these pieces does not allow fine-tuned control of temperature and length of time for firing, like modern electric or gas kilns. So even if the same glaze is used and the bowl is fired for the same length of time, each piece will turn out to be differently, says Kichizaemon.

“We fire the kiln by introducing air via a pair of hand-operated bellows to burn the binchōtan charcoal, the hardest and longest-burning of all types of charcoal. The sparks that fly up seem like a dragon rushing up into the sky. Being there during the process of a bowl’s birth is like peering into the molten core of a volcano. Like being present when a cosmos is being created.”

A kiln firing starts at midnight and continues for 18 hours, until six o’clock the next evening. Raku tea bowls, fired with the bellows constantly blowing air into the kiln, end up being exposed to variables in the natural state of the firing. “Even if I try to express myself through a certain shape or glaze,” notes Kichizaemon, “in the end, everything is entrusted to the power of nature. It goes beyond the artist’s ego and into the realm of prayer. The sense of nature that Japanese people have is strongly present in Raku ware.”

In this sense, Raku bowls are the polar opposite of Chinese celadons and porcelain, which permit no distortion of form or glazing irregularities. Kichizaemon expounds on this: “The subtle distortion that comes from making the tea bowls by hand-molding is vital. One might say that perfect things are superb, but they don’t have leeway for including any philosophic thought. People can put their trust in something that is not a perfect shape. In this they feel a strong connection with nature.”

Raku Kichizaemon XV has a real sense that the time has come at last when an artistic dialog is possible between the creators of the West and those from the profound world of black Raku bowls. He notes, for example, the dark blue monochromes painted by the French painter Yves Klein (1928–62), which are “stripped of all passion, with just a single color painted on the canvas.” He also mentions the paintings of Mark Rothko (1903–70), an American abstract expressionist painter of Russian Jewish descent, which “are close to black—a monotone that doesn’t use complex words.”

This allows new connections, he explains. “These pieces of modern art and work by Chōjirō from four hundred years ago are of different periods and were produced in vastly different conditions. So we cannot say they are the same. But we can now have this conversation. ‘You’ve made your canvas all black, I see.’ ‘Ah yes, just like the black of your tea bowl.’ ‘What inspired you to take that artistic route?’ Western culture and Japanese culture have reached an age where they can communicate beyond the gulfs of space and time.” 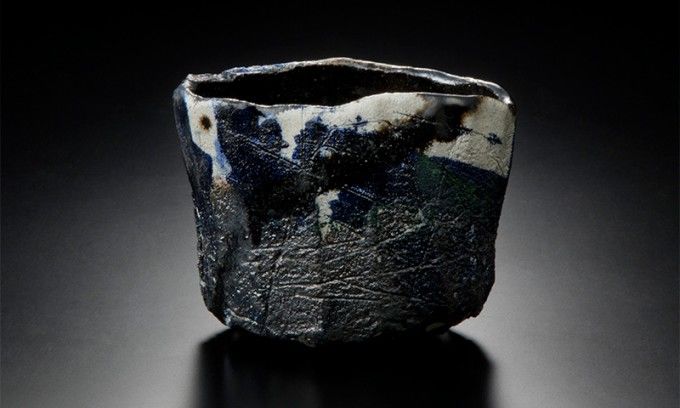 Yakinuki-type black Raku tea bowl by Raku Kichizaemon XV, 2012. Collection of National Museum of Modern Art, Tokyo. A yakinuki piece, made with a firing technique developed by Raku Ichinyū IV that involves direct exposure to red hot coals or flames deep inside the kiln. While preserving the traditions of the Raku family, Kichizaemon’s bowls are also receiving attention outside of Japan as the work of a modern ceramic artist.

Kichizaemon exhibited some of his own black Raku tea bowls at the In-Finitum exhibition held alongside the 2009 Venice Biennale. Upon entering the small, rather somber room set up to display the bowls together with a painting by Rothko, Kichizaemon said that he felt as though Rothko’s abstract expressionism and his bowls, with their lineage going back to Chōjirō, were practically in the same territory.

The Cosmos in a Tea Bowl: Transmitting a Secret Art Across Generations of the Raku Family

The traveling exhibition of generations of work from the Raku family was extremely well received at Russia’s Hermitage Museum and the Pushkin State Museum of Fine Arts and the Los Angeles County Museum in the United States. The show then came home to Japan, featuring an increased number of important works including pieces by Chōjirō designated as Important Cultural Properties; following an exhibition in Kyoto, these are now on display in Tokyo.

Visitors can view pieces by the artist Hon’ami Kōetsu (1558–1637) as well as Chōjirō, whose most important works are on display. As Kichizaemon notes, “These are bowls that were once in the possession of Rikyū, who drank tea out of them.”

This is a rare opportunity to appreciate these works, he stresses. “There will never be another exhibition like this while I am alive.” Bowls for the tea ceremony are items to which the collector forms a deep attachment, making it difficult to obtain permission to exhibit them. “I went to the home of a certain collector to borrow a piece for the exhibition. After the bowl was packed up and I sat in the transport company’s truck, I could see that person giving a hand clap, as given in worship at a Shintō shrine, together with a deep bow. That’s when I felt the tremendous pressure in borrowing such pieces,” reflects Kichizaemon.

(Originally written in Japanese by Kawakatsu Miki. Photos by Kawamoto Seiya. Banner photo: The current head of the Raku family, Raku Kichizaemon XV, studies one of his own creations.)