The Avant-Garde in Raku Ware

Culture May 19, 2017
The name Raku today enjoys international currency in the field of ceramic art, but the history and philosophy of traditional Raku ware are little known to the world. Here we explore the avant-garde spirit encapsulated in Raku tea bowls.

Always in the Now

Raku is known as earthenware that is fired at low temperature. But few people are aware that its roots go back to the chawan (tea bowls) that Chōjirō, the first head of the Raku family, crafted for the Japanese tea ceremony in the late sixteenth century.

Chōjirō’s tea bowls were made by a handbuilding technique known as tezukune, a method of slab forming, and shunned both color and ornamentation. Bursting onto the scene in an era when delicate wheel-thrown chawan were widely favored, they astounded people and earned the name ima-yaki, literally meaning “now ware.” At the time, Chōjirō’s bowls were regarded as avant-garde art.

How did ima-yaki come to be called Raku-yaki, or Raku ware? Following Chōjirō’s death, his ima-yaki tea bowls came to be known as Juraku ware, after the name of the area where his pottery was located.(*1) Tanaka Sōkei—father of Jōkei, the second head of the Raku line—was presumably given a seal bearing the kanji for Raku around that time by the warlord Toyotomi Hideyoshi (1537–98), and the name appears to have gained currency over the years as a descriptor for the clan’s tea bowls, too.

The details are unclear as to when and how the popularity of Raku spread overseas. Around 1960, Paul Soldner (1921–2011) and other American ceramic artists began working with the idea of low-firing vessels in small kilns, a principle taken from Japanese Raku ware. Soldner is credited with setting off a Raku boom in the West by harnessing chance effects caused by smoking the vessels with sawdust and other combustible materials immediately after removing the still-hot pieces from the kiln. (While this technique is not practiced in Japanese Raku, it produces similarly serendipitous idiosyncrasies in the pieces.) 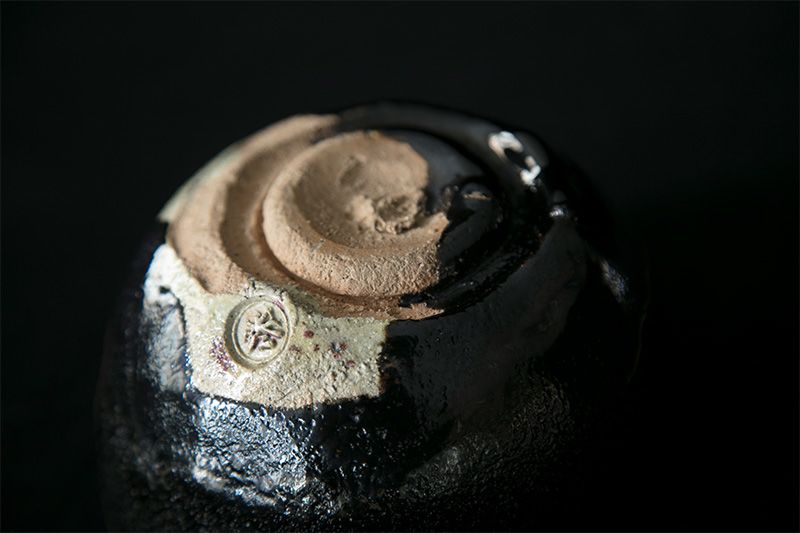 The seal of Raku Kichizaemon XV. The name “Raku” is said to derive from a seal presented by Toyotomi Hideyoshi bearing that kanji.

The Western versions of Raku may be avant-garde in their own right, but the radicality of Japanese Raku ware differs greatly in the light of the techniques used and the underlying spirituality and aesthetics. The unique world of Raku ware is showcased in “The Cosmos in a Tea Bowl: Transmitting a Secret Art Across Generations of the Raku Family,” an exhibition featuring the family’s works from the first head down to the upcoming sixteenth generation. The show runs through May 21, 2017, at the National Museum of Modern Art, Tokyo.

Generations of Tradition and Creativity

A lion with two-colored glaze greets visitors as they step into the exhibition. Made by Chōjirō in the days before he began working on tea bowls, the lion figure is a “key to unlocking the mystery of Chōjirō’s tea bowls,” according to Kichizaemon, the fifteenth grand master of the Raku line. It is the only work by Chōjirō engraved with the author’s name and year of production. The pulsating energy of the sculpture is in stark contrast to the stillness of the tea bowls, yet it also evokes a strong connection with the tea master Sen no Rikyū (1522–91). 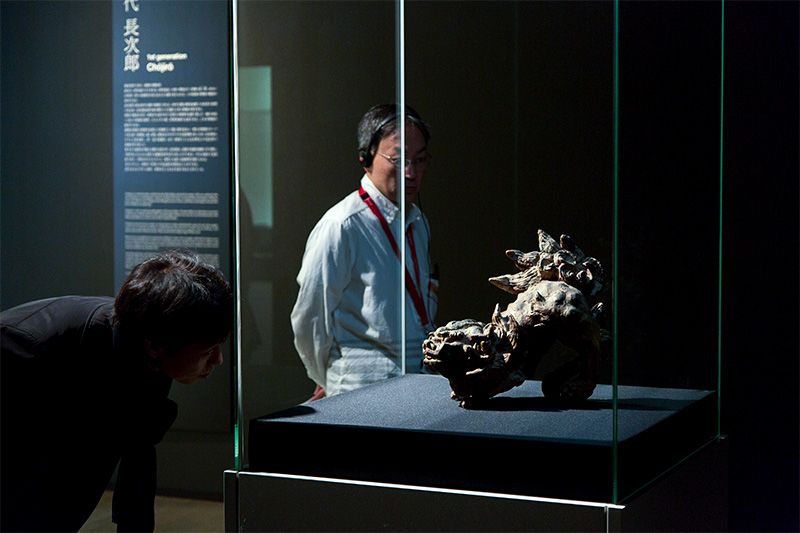 Lion with two-colored glaze by Chōjirō, the first head of the Raku family. Important Cultural Property. 1574. Collection of the Raku Museum, Kyoto. Rikyū presumably made a point of commissioning the intensely expressive Chōjirō to produce subdued tea bowls in the austere wabi-cha aesthetic.

The first room displays more than 10 tea bowls by Chōjirō—vessels from which Rikyū himself sipped tea. Chōjirō’s black Raku tea bowls are monochromatic, entirely coated in black glaze down to the kōdai (feet) as well as inside the feet. These are “avant-garde works that go so far as to eliminate the author’s individuality,” says Kichizaemon. It is remarkable to realize the variety of shades present in the color black. 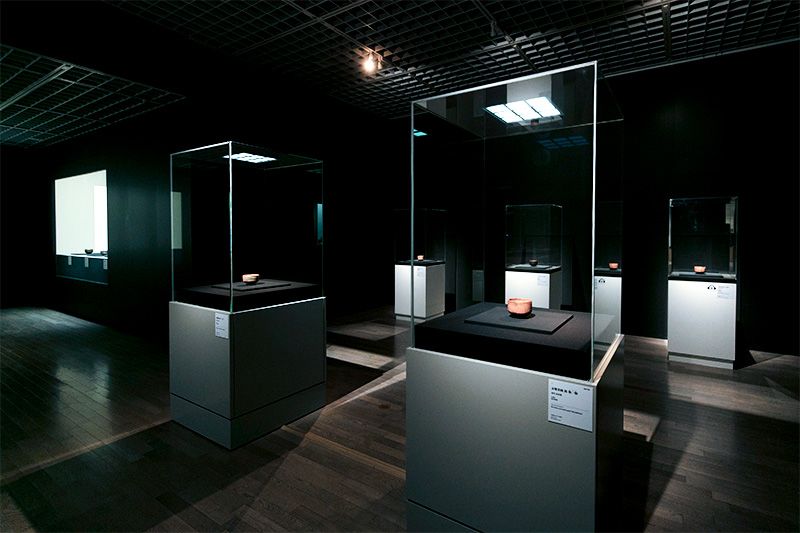 An air of quiet dignity saturates the first exhibition room, a reunion space for a widely dispersed collection of tea bowls by Chōjirō. 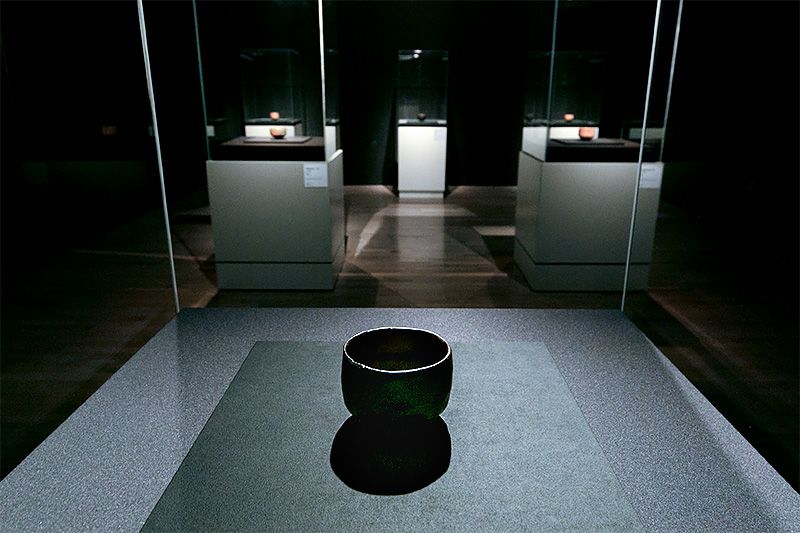 For 450 years, the traditional techniques of Raku ware have been handed down within the clan. A chronological look at the works of successive heirs makes abundantly clear that each hereditary head pursued his own style while being conscious of Chōjirō’s legacy. The Raku founder’s bowls are quiet and reserved. The bowls by the second generation clan head, Jōkei, are large and skewed. Dōnyū, the third Raku master, incorporated fashionable design in his work in an era when tea practitioners who had been acquainted with the wabi-cha master Rikyū were still around. Sōnyū, the fifth head, devised an original black glaze called kase while at the same time turning back to Chōjirō’s style. 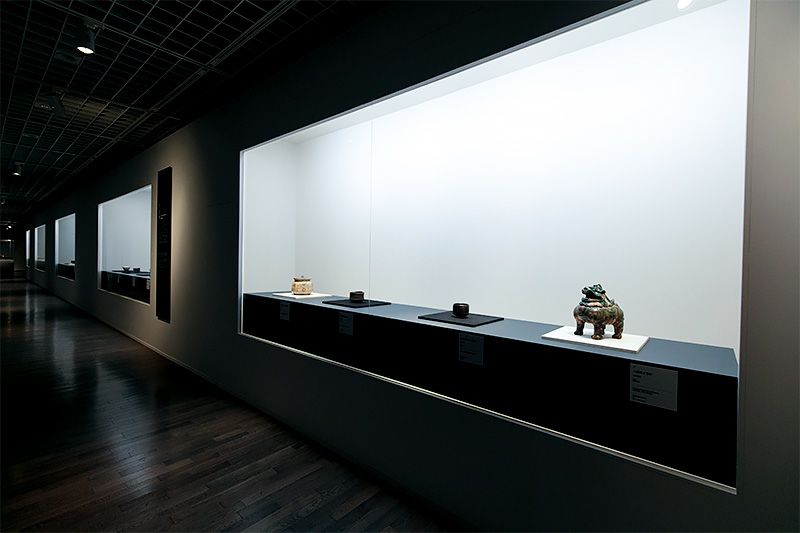 Works of the successive heads of the Raku line follow the Chōjirō room. Just as Chōjirō produced a lion figure, his successors have made lion-dog-shaped incense burners. 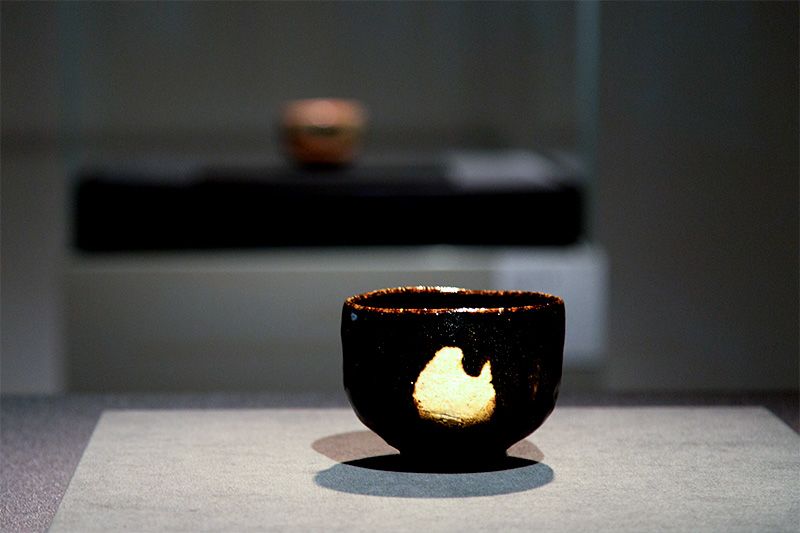 Dōnyū, also known as Nonkō, was touted as a virtuoso by the great artist Hon’ami Kōetsu of the early Edo period (1603–1868). The modernity with which he applied abstract images on his tea bowls suggests the influence of Kōetsu, a friend and mentor from whom he learned the spirit of invention.

In this manner, every generation engaged in an original approach while tactfully breathing the spirit of his era into his works, all the while feeling a connection to Chōjirō. This is a proud testament to the Raku family’s history of tradition and creativity, transmitting its secrets to just one member of each generation without ever taking apprentices or permitting branch families.

Soaring on Wings of Tradition

The show progresses from the first generation onward, culminating in three rooms devoted to works by the current head. There is an unearthly aura about them. Raku Kichizaemon XV was 27 years old when he resolved to carry on the family tradition in 1981. Using a special firing technique called yakinuki, Kichizaemon has produced rough-textured works that were unprecedented in chawan meant for use in the tea ceremony. He admits that tea masters have asked which side to drink from, expressed concern that the bowls might cut the drinker’s lips, and complained that chakin (tea cloths) do not slide smoothly over the bowls. But there is no doubt that his yakinuki tea bowls served as a catalyst for questioning convention and traditional values.

Raku Kichizaemon XV explores his own modern expressions and creativity befitting the twenty-first century while recognizing the avant-garde spirit inherent in Chōjirō’s tea bowls. Works by Kichizaemon occupy the three final rooms of the exhibition. 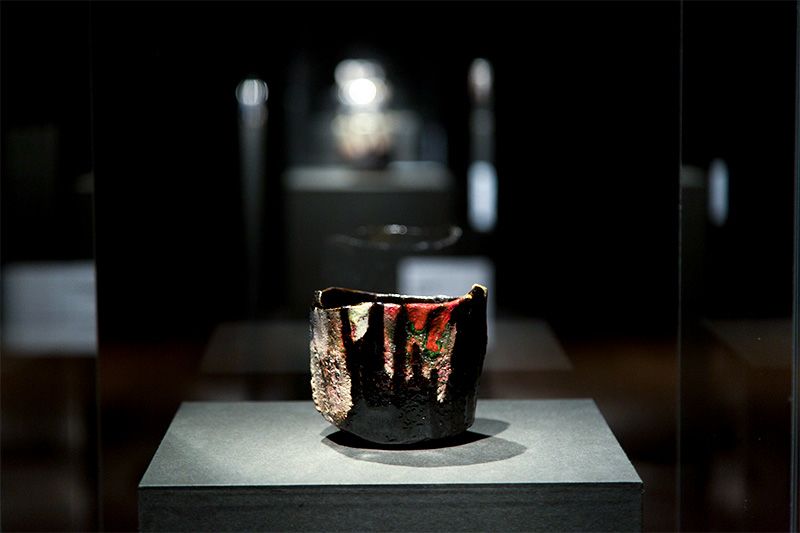 Yakinuki-type black Raku tea bowl named Tsukirōmei by Raku Kichizaemon XV, 1986. Yakinuki is a firing technique that involves blowing a bellows inside the kiln with great intensity to finish the bowls at very high temperature. The avant-garde works by Kichizaemon startled the Japanese tea ceremony world.

Kichizaemon has also produced a series of tea bowls that resonate with his own poems, as well as works inspired by Chinese poetry. Pondering the poems as one views the bowls adds depth to the experience.

Some of his works on display have a French heritage: flower vases made in the village of Loubignac, France, and France Raku tea bowls made with white clay from Limoges using the Western Raku technique of removing the bowls from the kiln during firing and thrusting them into combustible materials like sawdust to cause charring. From these pieces, one can sense the grand master’s delight as he worked in an environment free from the traditions of the Raku family and tea ceremony. 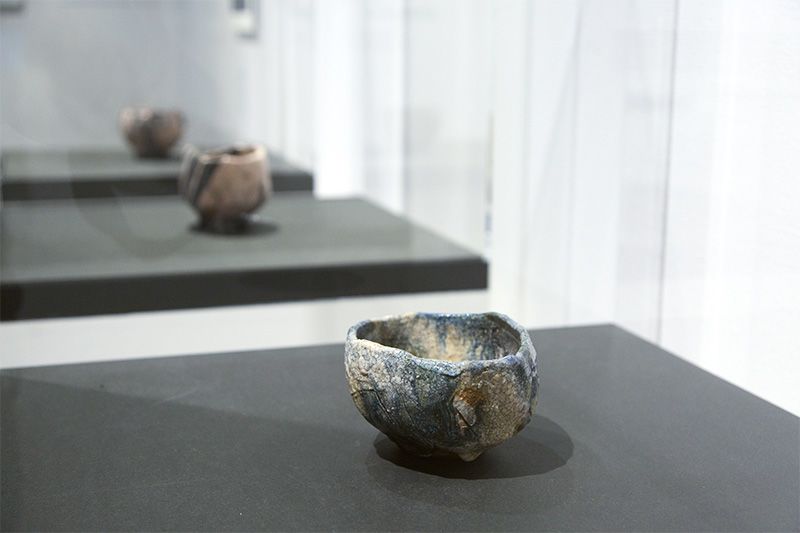 France Raku tea bowl by Raku Kichizaemon XV, 2007. Collection of Sagawa Art Museum, Shiga Prefecture. Produced in the Western Raku style at a pottery owned by his friend and ceramic artist Andoche Praudel in the French village of Loubignac. Liberating himself from the confines of the Raku family tradition, Kichizaemon made this tea bowl using only French materials, having brought no clay, glaze, or any other material from Japan.

The spirit of shuhari,(*2) prized in ancient Japanese disciplines, thrives to this day in Raku ware. The determination to follow (shu) tradition paves the way to a break (ha) with it and ultimately precipitates departure (ri), explains Kichizaemon. In 2007 he designed a wing dedicated to his own works and a tea room surrounded by water at the Sagawa Art Museum in Moriyama, Shiga Prefecture. The works of intercultural collaboration that the artist created in 2009 for that wing forms one of the highlights of the “Cosmos in a Tea Bowl” exhibition. 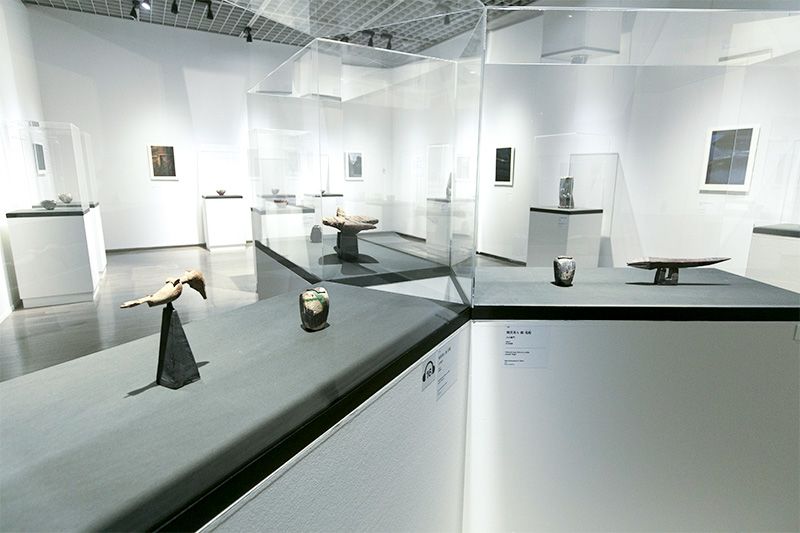 (In foreground from left to right) Wooden bird from Borneo, artist unknown; yakinuki-type Raku tea caddy named Seiran by Raku Kichizaemon XV, 2009, collection of the Raku Museum, Kyoto; yakinuki-type Raku tea caddy named Nāga by Raku Kichizaemon XV, 2009, collection of Sagawa Art Museum; wooden snake from Borneo, artist unknown. The tea caddy on the left looks as though it is deep in dialogue with the Bornean bird that inspired it, one of the Indonesian folkcraft pieces in Kichizaemon’s personal collection.

At the end of a journey following the works of generations of Raku masters, each of whom created works imbued with spirituality while perpetually shifting like a pendulum between tradition and creativity, visitors arrive at the final room. Here they come face to face with yakinuki-type black Raku tea bowls shaped by the hands of Kichizaemon XV—taciturn yet compelling in their presence, echoing their creator’s confession that he would like “to exist quietly, like a large rock.”

Yakinuki-type black Raku tea bowls by Raku Kichizaemon XV. Private collection. Dubbed ganseki (rock) chawan by their creator, these bowls give a glimpse of the new realm that Kichizaemon is now entering. From works that “shouted” with bold, primitive colors like red, indigo, and green, Kichizaemon has moved on to monochromatic tea bowls that “do not speak.”

(Originally written in Japanese by Kawakatsu Miki. Photos by Kawamoto Seiya. Banner photo: A member of the foreign media gazes intently at a black Raku tea bowl by Chōjirō.)

The Cosmos in a Tea Bowl: Transmitting a Secret Art Across Generations of the Raku Family
National Museum of Modern Art, Tokyo
March 14–May 21, 2017

While exhibitions focused on history are normally held at non-art museums, the venues of this traveling exhibition are museums of modern art. “We wanted to recapture the centuries-old world of Raku ware from a contemporary perspective,” explains Matsubara Ryūichi, chief curator of the National Museum of Modern Art, Kyoto, who organized the show. In addition to the exhibition on the first floor, a mini-feature on the third floor displays a black Raku tea bowl by Chōjirō and another by Kichizaemon XV. The pair is juxtaposed with a video work by the artist Takatani Shirō in the background; facing them are four contemporary paintings from the collection of the National Museum of Modern Art, Tokyo. Both exhibits shed light on the contemporaneity of Raku ware with an approach that only a modern art museum could have pulled off.

(*1) ^ Chōjirō lived near the Jurakudai palace, constructed by order of Toyotomi Hideyoshi, and made tea bowls using the Juraku clay excavated from that site. His bowls came to be known as Juraku-yaki after being introduced to the wider world by the great tea master Sen no Rikyū, who also resided within the palace grounds.

(*2) ^ An underpinning concept of traditional Japanese disciplines, shuhari is purportedly based on a waka poem summarizing one of the teachings of Sen no Rikyū: Kiku sahō / mamori tsukushite / yaburu tomo / hanaruru tote mo / moto o wasuru na (roughly meaning that while one should adhere to the teachings of a discipline, it is important to eventually break and part ways with them, but without forgetting their fundamental spirit).