Culture May 3, 2017
Chicago-born Curtis Patterson has lived in Japan since 1986, dedicating himself to the koto, a traditional Japanese instrument something like the harp. In addition to composing and performing music for the koto, he is an avid teacher seeking to boost the dwindling number of koto players. 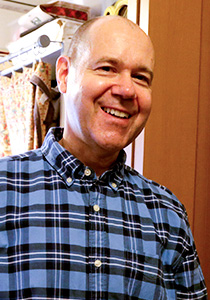 Koto performer, composer, and teacher based in Japan. Studied with modern koto great Sawai Tadao and holds a master’s license from the Sawai Koto Institute. Became the first non-Japanese national to graduate from the NHK master’s program for young performers of traditional Japanese music in 1995. A member of the Sawai Tadao Koto Ensemble and Soemon, a koto performing group. Has played with artists including the singer/songwriter Ogura Kei. Since 2007, has worked with shakuhachi player Bruce Huebner, performing original compositions and arrangements across Japan. Released his solo album Oto no wa (Circles) in 2002 and partnered with Huebner on the 2007 Going Home and the 2008 Tracings. His website is www.curtkoto.com/.

The Classical Japanese Musician from Illinois

During the cherry blossom season, the song “Sakura,” which takes its name from the short-lived flowers, can be heard in many places around Japan—frequently played on the koto. This elegant instrument, made from the wood of the paulownia tree, bears some resemblance to the harp. Although it dates back more than 1,200 years, it is no longer a common part of everyday life in present-day Japan. Few Japanese play the national instrument, and it has come to play only a minor role in the musical world.

The Chicago-born Curtis Patterson came to Japan 30 years ago. In the decades that followed, he took an unusual career path for an immigrant, becoming a professional koto player. Today he sees part of his role here in the instrument's homeland as introducing younger generations to the charms of the koto.

“The sound of the koto has a human warmth to it, along with abundant possibilities for musical expression,” Patterson says. “As you play, you can create various musical scales by just moving the adjustable bridges that support the strings.” 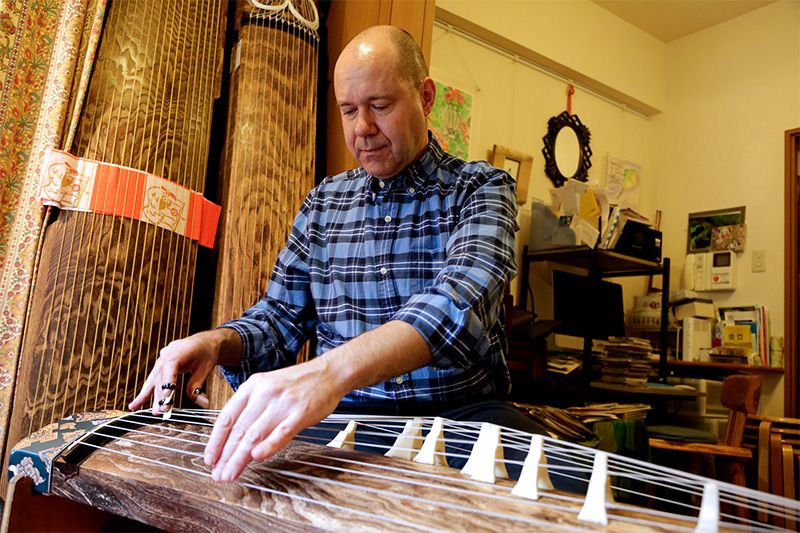 Patterson practices the koto in his small apartment in Meguro, Tokyo, where he also gives private lessons.

Patterson’s first encounter with the koto was in 1981, when he was a student at Cornell College in Iowa. He joined the school’s koto ensemble, and was able to travel to Japan and perform with the group the following year. “I had never left North America, so coming to Japan and performing the koto with Japanese college students changed the whole course of my life,” he says.

Enchanted by the people and culture of Japan, Patterson returned in 1986 to work as an English teacher in Tochigi Prefecture. At this time he was studying jiuta, a classical style of koto music with accompanying vocals that flourished in the seventeenth and eighteenth centuries. He then moved to Kyoto and took lessons from a disciple of Sawai Tadao (1938–97), a renowned musician who revolutionized the koto world by composing and performing innovative works for both the standard 13-string koto and the 17-string bass koto.

“Learning traditional koto music from my first teacher in Japan was an eye-opener, because I had never learned the vocal lines to go with the koto when I was in Chicago. Following that, learning Sawai’s innovative music was a quite dramatic experience for me,” Patterson confesses. “Sawai’s techniques were extraordinary. He hit the top of the koto strings with drumsticks, applied the Okinawan music scale to the instrument, and did all sorts of creative things. I was also overwhelmed by his orchestralike arrangements, with twenty to thirty koto players on a single stage.” 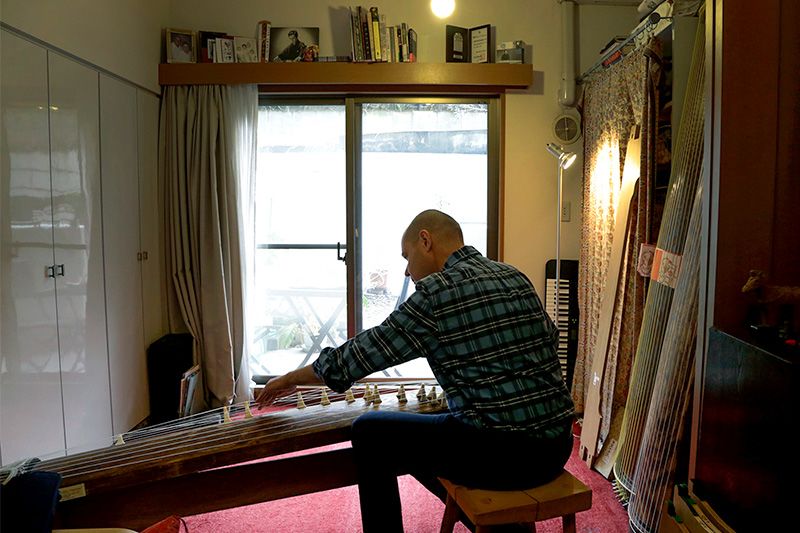 A photo of the late, great koto master Tadao Sawai watches Patterson from above.

More Than Just the Classics

After relocating to Tokyo in the early 1990s, Patterson began studying directly with Sawai himself. He obtained his master’s license from the Sawai Koto Institute and became the first non-Japanese artist to graduate from the prestigious NHK master’s program for young performers of traditional Japanese music.

Sawai died in 1997, but his music is still performed by many players, including Patterson. In his small apartment in Meguro, Tokyo, Patterson played Sawai’s variations on “Sakura” for Nippon.com. With a number of different plucking techniques and shifting patterns and rhythms, he created intertwined textures within the simple melody, achieving a layered sound to draw the listener into a mesmerizing world.

The koto strings are plucked with picks called tsume on the forefinger, middle finger, and thumb of the right hand (left). The sound of a note after it is played can be easily manipulated by pressing and pulling on the strings with the left hand.

Patterson then played an original piece, “Sunday Afternoon,” which had a somewhat Celtic sound to it. “If you close your eyes and listen to the music, you may not think that I am playing the koto,” Patterson smiles. “I have Scottish roots in my family, so it was natural for me to come up with this type of number.”

Patterson began to write his own music for the koto about 10 years ago. Around the same time, he met Bruce Huebner, a fellow American who came to Japan to play another Japanese traditional instrument, the shakuhachi bamboo flute. The two formed a duo to tour Japan, performing everything from classical koto to jazz-inspired scores and original compositions. “This was a huge turning point for me” to further expand the potential of his instrument, says Patterson.

Looking to the Next Generation of Musicians

While Patterson continues to compose his own pieces and perform the koto on stage, he feels that fostering the next generation is critical to the survival of the instrument. Since 2011, Patterson has been teaching koto to elementary, middle, and high school students at the Yokohama International School. The koto plays a big part in the music curriculum for all students in grades four and five; as they move on to higher divisions, they have the opportunity to stick with it as their instrument of choice in the music course. Patterson starts off by teaching the basics of how to play, but students are soon encouraged to compose their own music. 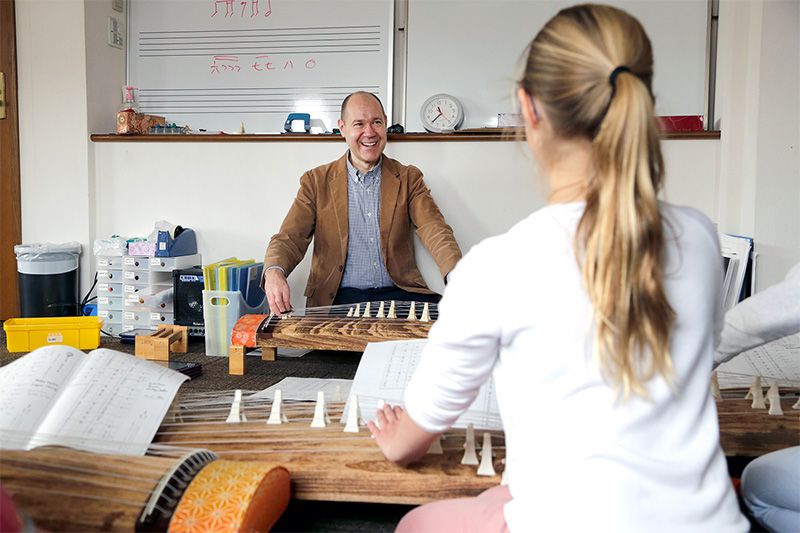 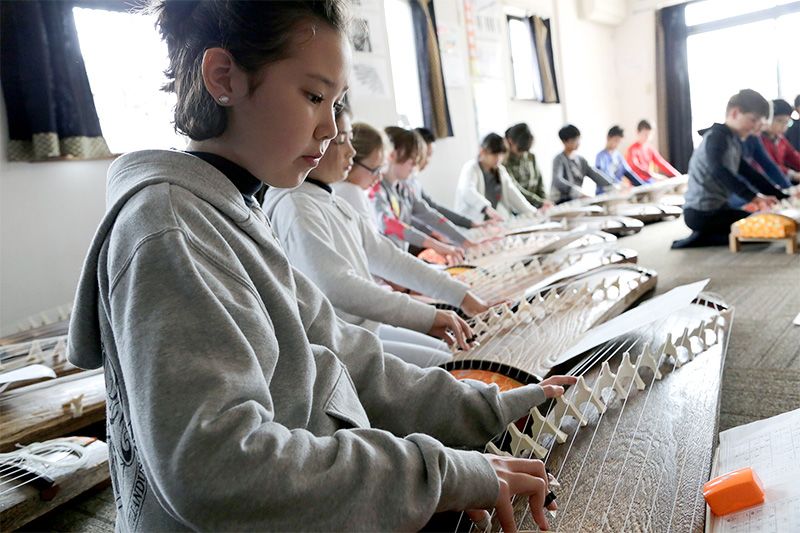 Students kneel on a carpet, don their picks, and practice under Patterson’s tutelage.

On a sunny morning in March 2017, some 20 fifth-graders gathered in a room on the second floor of a traditional Japanese house owned by the school. Patterson, seated before them, plucked three strings randomly and asked the students to repeat. Amazingly, the young girls and boys followed suit with no trouble. He then handed out a music score, which the students read out loud before playing it along with him. They performed without missing a beat, even after their teacher added the counter melody. “I’m always amazed how quickly these children pick up the instrument and understand its power of communication,” Patterson says.

His efforts to nurture young koto artists have recently brought exciting results. Some of his older charges have won awards at the national level, and a graduate who recently made his recording debut was accepted as a student by the Tokyo National University of Fine Arts and Music.

“What we think of today as ‘traditional' koto music was revolutionary when it first appeared. What we need today is more young people who are able to create new types of music with the koto.” 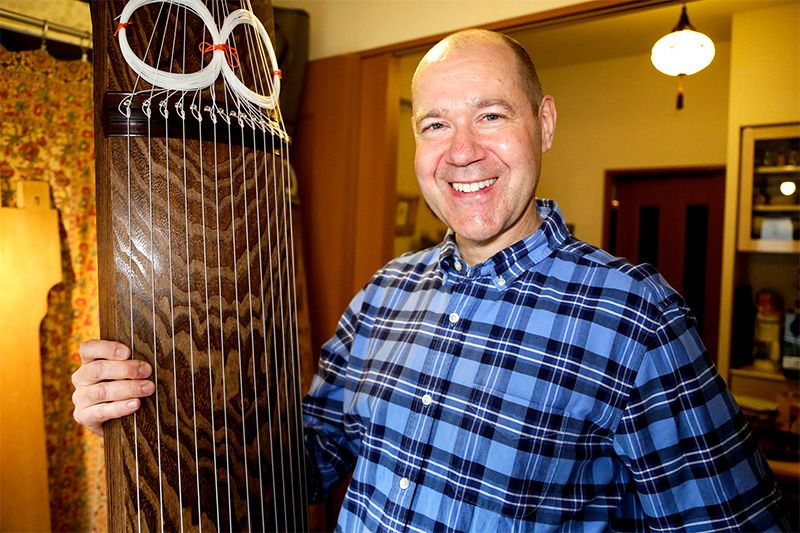 Patterson has more than 10 kotos at home, including a recent purchase, a top-grade instrument made by a skilled craftsman worth more than ¥1 million yen.